Why diligent searches are key to inter partes reviews 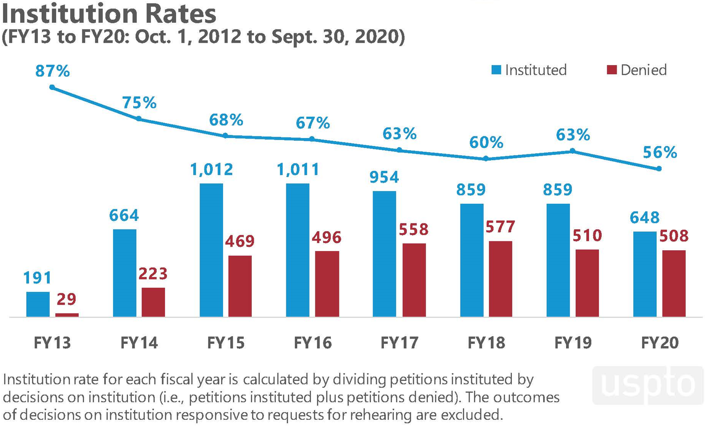 It is legally and financially beneficial for a defendant in a patent infringement dispute to utilise the inter partes review process to attempt to invalidate asserted patent claims. According to the American Intellectual Property Law Association’s (AIPLA) Report of the Economic Survey 2017, the average legal cost facing a defendant in a district court patent infringement case runs between $1 million and $4 million when the damages risk is $10 million, and as high as $6 million when the risk exceeds $25 million. This figure excludes other costs, such as disruptions to the operations of the defendant’s business as well as the distraction and opportunity cost of the various individuals involved in the case. In stark contrast, the cost of filing an inter partes review and the associated PTAB hearing is in the range of $150,000 to $400,000, according to the same AIPLA report.

Given the popularity of the inter partes reviews process, the associated practice of law in petitioning such reviews before the PTAB has become fairly specialised.

Industry focus, case selection and, of course, legal expertise and experience from one firm to the next play key factors, and partly explain the variance in success rates. Often overlooked is the quality and methodology of obtaining the prior art that is central to any inter partes reviews argument. This article reviews Global Prior Art’s internal database of over 17,000 invalidity prior art cases addressed since the firm was created in 1982, including many cases in which we supported subsequently filed inter partes reviews petitions, to pinpoint case studies that illustrate the impact of strong (and weak) prior art and the underlying methodologies used to obtain them. The learnings from these case studies – which will be presented over the next few weeks in the IAM weekly newsletter – can be instrumental in setting out strong arguments for inter partes reviews and, in turn, increasing an attorney’s likelihood of success.

Valve Corporation v Ironburg Inventions Limited (IPR 2017-00136 and IPR 2017-00137) is an excellent example of the factors at play when a diligent prior art search is not conducted.

In previously filed inter partes reviews (IPR2016-00948 & IPR2016-00949), petitioner Valve Corporation had relied on a commercial prior art search (from CPA Global (Landon IP) Inc), which failed to uncover sufficient prior art disclosing key features of the challenged claims. The filed inter partes reviews, relying on the findings of the CPA Global search, resulted in final written decisions maintaining the validity of several of the challenged claims. Believing that strong invalidating art must exist, Valve subsequently pursued several additional rounds of searches, which uncovered a new and promising US patent prior art reference (US 6,362,813, to Worn) and then proceeded to challenge a number of claims as anticipated by Worn in subsequently filed IPR2017-00136 and IPR2017-00137.

As an expert witness retained by the patent owner, Ironburg Inventions Limited, Dr Rubinger – one of the authors of this article – was asked whether a skilled searcher should have identified this critical reference. To address this question our team carried out the search independently, without knowledge of the Worn reference. Performing a diligent search following best practice, this reference was indeed uncovered. As the PTAB concluded in its opinion: “we determine that the evidence sufficiently establishes that a skilled searcher conducting a diligent search reasonably could have been expected to discover Worn” [see Page 4, IPR2017-00137]. The PTAB went on to describe the process used to implement a diligent search. Based on this evidence, the board determined that Valve was estopped under 35 USC 315 (e)(1) from arguing the Worn reference in the inter partes reviews.

Figure 2. The inherent likelihood of uncovering strong prior art with each distinct search approach

The coverage and implementation of a diligent search is highlighted in Figure 2, where it is contrasted with other common search approaches. The typical patentability search has limited coverage and relies extensively on keyword searching with limited manual review. The goal is to identify low-hanging fruit, with the inherent likelihood of uncovering strong prior art in the range of between 5% and 20%. In contrast, an accelerated exam search is an enhanced patentability search covering the proscribed sources outlined by the USPTO. Implementation requires five to six days’ effort, with the likelihood of locating strong prior art between 25% and 40%. Since the success rate of a search is determined solely by the implementation process, a patentability search combined with a long report does not change its likelihood of success.

Post grant, there is the shallow dive or simple invalidity search, which is budget conscious and thus entails less extensive manual searching and limited coverage. The yield reflects this with, from our experience, a success rate of finding strong art of only 40% to 60%. In contrast, the extended coverage and rigorous implementation process associated with a diligent invalidity search consistently yields a success rate of uncovering strong references of between 70% and 90%. As noted by the PTAB a “skilled searcher performing a diligent search begins with selecting one or more patent classifications and subclassifications in the US Patent Classification”. “A professional search requires more than text searching. A systematic and exhaustive search of ‘core’ and peripheral subclasses is imperative to a reliable search.”  Other aspects are covered in Figure 2.

In the period after inter partes reviews were created, a common approach was to file a petition quickly because deficiencies identified by the PTAB could be subsequently corrected with a second or third inter partes review. However, the PTAB raised the bar in Valve Corporation v Ironburg Inventions Limited, curbing the use of successive petitions and making it imperative to get it right the first time.