Who’s ahead in the WiFi 6 patent race

Connected venues and cities, connected cars, connected factory and connected home are just some of the scenarios that will be made possible by the technical benefits of next-generation WiFi 6 technology. Yet the licensing of WiFi 6 SEPs is gradually becoming an issue, particularly where licensing needs to be negotiated among SEP owners and standard implementers for an array of different applications and use cases. IPlytics’ research provides an illuminating snapshot of the WiFi 6 patent landscape as it currently stands.

Today, almost everyone owns a smartphone that connects to a network router - and thus to the Internet - via WLAN, along with tablets, laptops, smart TVs or gaming consoles. Streaming services such as Netflix, Amazon Prime Video or Disney Plus are replacing linear TV for many users. Connected cities or campuses provide tens of thousands of WiFi access points to citizens or students. While much of today’s Internet traffic comes from connected devices that communicate with a smartphone, it is predicted that worldwide data traffic for the next five to 10 years will no longer be between people, but among vehicles, machines, meters, sensors, medical instruments or other various types of networked devices, without any human interaction. The increasing number of devices and demand on bandwidth, latency and throughput is creating challenges to deliver speed, reliability and accessibility that earlier generations such as WiFi 4 (IEEE 802.11n) and WiFi 5 (802.11ac) will no longer be able to deliver. Key features enabling the benefits of next generation WiFi 6 (802.11ax) technology include:

The technical benefits of WiFi 6 will enable use cases beyond what is possible today, including the following:

WiFi 6 will likely become the dominant access choice for indoor networks on account of improvements in speed, latency and higher density of connected devices. It is also the ideal system in spaces where access points will serve more users. However, WiFi 6 will have to co-exist with 5G to support complementary use cases at home, while driving, at the office, outside or when working remotely, as displayed below.

While some have argued that WiFi 6 and 5G will be in competition with one another, it appears more likely that, for many applications, they will work perfectly to complement each other. In any case, it is probable that most connected devices will not rely on a single technology to ensure connectivity and, therefore, WiFi 6 will be one of several technologies enabling the next technological revolutions.

Table 1 shows the different WiFi generations and lists the maximum link rate and the frequency, as well as the dates, on which the standards were developed and adopted. The increasing link rates again confirm the improvements that WiFi 6 will bring and how it will be superior to former generations. Moreover, the next generation is now on the radar with WiFi 7 already being developed by the wireless technology standards organisation the Institute of Electrical and Electronics Engineers (IEEE), where standards development commenced in 2019.

When looking at the IEEE-submitted and approved standards contributions, the overtime data analysis confirms that the work for WiFi 7 has already begun, with an increasing number of contributions having been submitted at the 802.11 working group TGbe (Figure 1).

Figure 1. Submitted standards contributions as to WiFi 6 and 7

A changing world of WiFi 6 contributors and implementers

Analysing contributions is a method of assessing the involvement and investment of companies in the development of connectivity standards. It is also a means through which to identify the technology leaders that are specifying the next generation of WiFi standards. Figure 2 shows the number of approved and accepted WiFi contributions for the WiFi generations 4, 5, 6 and 7. Here, Huawei (CN) has submitted the most contributions across the WiFi generations and is in the strongest position with regard to, with the upcoming WiFi 7 technology, while Qualcomm (US) has submitted the most WiFi 6 contributions, followed by Intel (US), MediaTek (TW), Marvell (US) and LG (KR). The ranking in Figure 2 displays clearly how the top technology standard contributors have changed their contributions level across the different generations.

Figure 2. Submitted standards contributions as to WiFi 4, 5, 6 and 7 as to contributing company 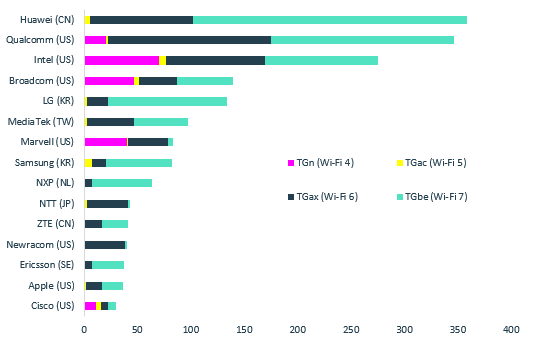 Not only has the landscape of technology contributors changed, but the industry verticals implementing different generations of WiFi standards have also been subject to a tremendous shift. Figure 3 illustrates the WiFi implementation in products by category. WiFi since 2001 has been predominantly applied in products such as routers and computers, while, since 2006, there has been a sharp rise in WiFi implementation in phones, TV, gaming and tablets, e-readers and cameras. For the last five years or so, several product categories have been added to the list, including WiFi implementation in buildings, smart homes and other categories including heating, lighting, vehicles, machines and other devices.

Figure 3: Number of WiFi accredited products as to product category

With a wider implementation of WiFi 6 beyond routers and phones or personal computers, the licensing of SEPs has increasingly become an issue for the industry. While IEEE hosts a database that allows standards members to submit potentially essential patents through a so-called latter of assurance (LOA), most LOAs are blanket declarations. In other words, a company declares that it owns SEPs for WiFi in a blanket statement, without disclosing the actual list of patents that are potentially essential. For WiFi 6 (802.11ax), as of today, we identified LOAs submitted by 19 declaring companies, where only one company provided a list of specific patent numbers. The standards contribution data, in comparison, identifies over 80 companies that have submitted multiple technical contributions at the WiFi 6 working group TGax, suggesting that there are likely to be more than 19 potential SEP holders for WiFi 6.

Standards contribution data can work as a starting point to attain a clearer picture of the WiFi 6 patent landscape, as any standards contributor may also potentially own SEPs. To break down all patents potentially essential for WiFi 6, IPlytics begins by identifying the patent portfolios of all 19 LOA submitting companies and all 80 WiFi 6 contributing companies, while both lists overlap with a total number of 84 identified companies. To further filter the patent portfolios, IPlytics has identified all major International Patent Convention (IPC)/Cooperative Patent Classification (CPC) classes relevant to WiFi 6, as well as a time range from 2013 to today (as to the earliest priority date).

IPlytics has access to a representative sample of 200 WiFi 6 verified (subject matter-expert-claim-charted) SEPs that allows the identification of the boundaries of IPC/CPC classes and priority dates. In addition to the broad filtering with IPC/CPC classes and dates, IPlytics has cross corelated the authors’ names (first name, last name and entity) of over 7,000 TGax contribution documents with the inventor names (first name, last name and entity) of all patents identified. Earlier research has confirmed that inventors listed on verified WiFi 6 essential patents in 72% of the cases have also submitted contributions at the IEEE TGax meetings. Following this approach involves the identification of 10,854 granted and pending patent families in the potential WiFi 6 universe. Figure 4 shows that Huawei (CN), Qualcomm (US), Intel (US) and LG (KR) have filed the most WiFi 6 patent families, followed by ZTE (CN), Ericsson (SE), Sony (JP) and Apple (US). 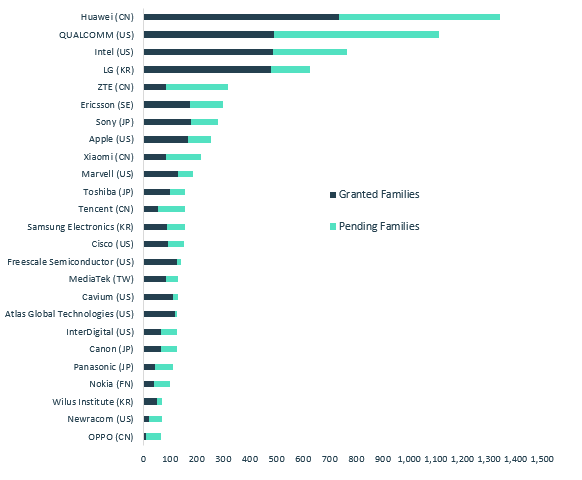 WiFi 6 will play an important role in the assortment of connectivity standards that will be at the core of the next technology revolution. It will likely be implemented in millions of devices across different industry verticals, including smart homes, smart factory technologies, smart energy, smart cars and even smart healthcare. The licensing of WiFi 6 SEPs will thus be negotiated among SEP owners and standard implementers for various applications and use cases. It is therefore crucial for any IP professional to better understand the landscape of WiFi 6 patents. Interested parties should bear in mind some key considerations when working with WiFi 6 technologies: