Part one of this article (see here) gave an overview of the leaders in the 5G patent race. In part two IPlytics takes a deep dive into further indicators of companies’ growing interest in developing 5G technology.

The IPlytics Platform makes use of statistical patent valuation indicators to analyse the strengths, weaknesses and positioning of patent portfolios. In close cooperation with the Technical University of Berlin, Mines Paris Tech and Northwestern Chicago, IPlytics uses scientifically validated methods to calculate relevant patent valuation indicators. In order to compare different patent portfolios, the statistical indicators are normalised by averages of patent control groups at the same patent office, International Patent Classification (IPC) or Cooperative Patent Classification (CPC) class and publication year. A patent from 2010 that was filed in the United States with the IPC/CPC H04W that receives six foreword citations is compared to the average forward citation counts of all US/2010/H04W patents. If the forward citation count is six and the average is three then the statistical indicator is two – a value twice as high as average.

The technical relevance (TR) indicator is calculated by counting the number of prior art citations that a patent receives (forward citations). Citations are counted as citing families. Self-citations as well as subsidiary citations are not counted. Finally, counts are normalised by year, country of jurisdiction and main IPC/CPC.

The market coverage (MC) indicator is calculated by counting the number of countries in which the patent has been filed (jurisdiction) and weighted by the country’s gross domestic product. Finally, counts are normalised by year, jurisdiction and main IPC/CPC.

Figure 1 illustrates the patent portfolio valuation of declared 5G patent families as to the market coverage and technical relevance indicators. The y-axis describes the share of declared 5G families as to all-declared 5G families, the x-axis shows the average normalised number of forward citations (technical relevance) and the size of the bubble demonstrates the patent family size (market coverage). The companies LG, Samsung and Nokia have the highest TR values while the Chinese Academy of Telecommunications and Technology (CATT), OPPO and ZTE have rather low technical relevance (TR) values. A high TR value reflects the high technical relevance of a patent portfolio, since subsequent patents had to cite the patent portfolio as prior art. As the counts are normalized by year the portfolio age does not bias the results. Patent citations are reviewed and verified by objective and qualified patent examiners. A high TR value thus identifies leading technologies of a particular market segment. On the other hand, low TR values reflect the low technical relevance of a patent portfolio, since subsequent patents did not cite the portfolio as prior art. A low TR value reflects that a patent either protects a niche technology or a technology that is not relevant to other market participants. 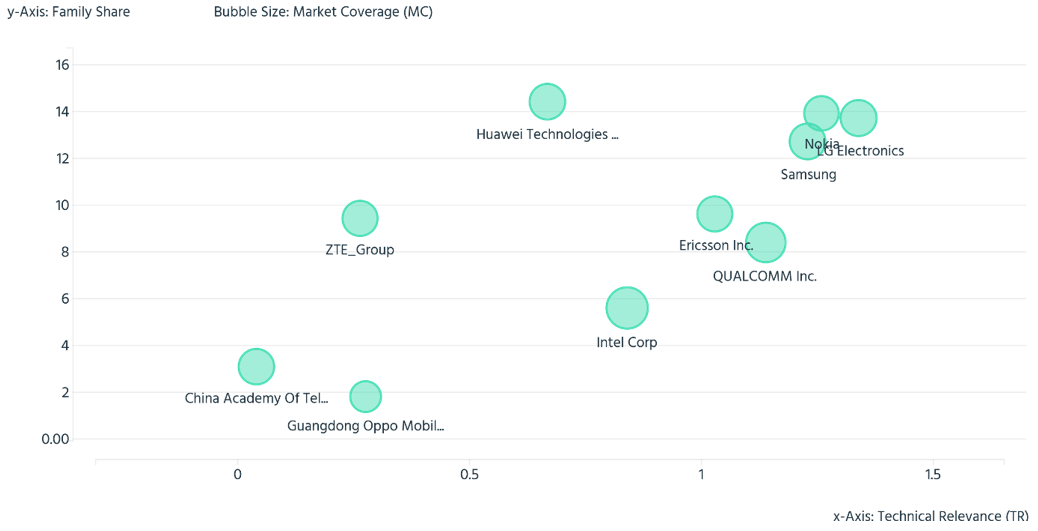 The interconnectivity of different systems and the communication across multiple devices relies on a common specification of the 5G standards. Standards development of complex technologies such as 5G therefore often integrates many patented solutions. Beyond the patent data analysis, it is also worth taking a look at the companies that are actively involved in 5G standards development. The 5G standard is specified in international meetings where companies present and submit technical contributions.

Using the IPlytics Platform’s database and analytics, Table 1 shows all those companies that declared 5G SEPs to then analyse if they have also submitted technical contributions to 5G (companies that have not yet submitted 5G-relevant SEP declarations were excluded). Huawei is responsible for most 5G contributions, followed by Ericsson, Nokia, Qualcomm and Samsung.

The 3rd Generation Partnership Project (3GPP) (ie, the consortium that develops the 5G standard) is divided into several sub-groups that each work on different technical matters. Not all of these groups are working on technologies that are relevant to mobile phones or Internet of Things (IoT) devices. For example, the work in the RAN3 group specifies the interfaces between infrastructure equipment only. RAN1, RAN2, RAN4, SA2, SA3, SA4, and CT1, on the other hand, define specifications relevant to mobile phones or other IoT devices only. The fourth column of Table 1 thus includes contributions submitted in these groups only. Again the group filtering changes the 5G contributions counts for each company.

Another measure used to estimate involvement and investment in 5G standards development is the attendance of engineers at the standards-setting meetings where 5G standards are developed. Attending these meetings reflects a company’s investment, as it shows that it has highly skilled technical engineers who commit their time to prepare, travel and discuss the latest 5G technologies.

Figure 2 illustrates the number of employees per company that attend the 5G standards-setting meetings. Each attendant is counted for each meeting. Huawei has sent the most employees to 5G-related meetings and thus spends a lot of resources to attend the worldwide 3GPP RAN meetings, followed by Ericsson, Samsung, Nokia and Qualcomm. However, a few companies that are not among the top patent declaring or standards contributing companies have attended many meetings (eg, NTT Docomo, Fraunhofer and Orange). 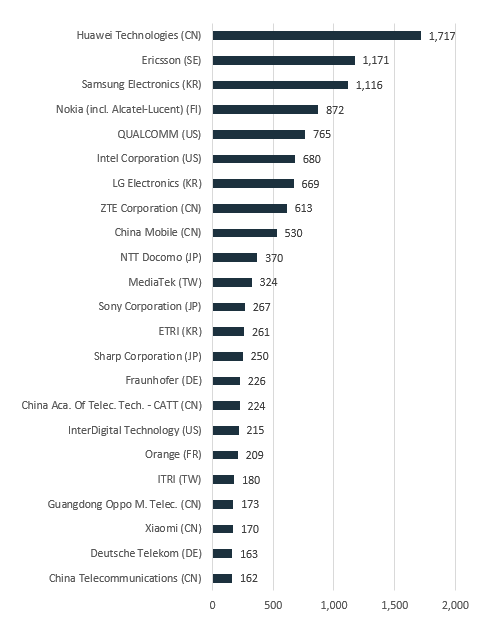 The licensing of 5G SEPs looks set to become a major issue not only for the handset industry, but for any manufacturing sector where connectivity will matter. Senior patent managers and patent directors should bear the following in mind with regard to 5G patents: