5G and global competition across industries and countries

As the world continues to grapple with the unprecedented challenges of the covid-19 pandemic, the development of 5G continues unabated. While the 5G standard has been developed since 2015 (Figure 1), its adoption is only beginning. Global wireless 5G adoption has finally reached the rapid acceleration phase, having exceeded half a billion connections by the end of 2021 and is forecast to reach 1.3 billion by the end of 2022. The 2021 Ericsson Mobility Report forecasts 5G subscriptions to reach 4.4 billion globally by the end of 2027, accounting for approximately 49% of total global mobile subscriptions. But the question remains: will 5G be a game changer in the smartphone industry?

In April IAM’s Jacob Schindler discussed the hypothesis that: “5G and the low latency (removal of delays) it offers will principally benefit businesses rather than consumers — at least for the time being”. Following this, the full potential of 5G will likely be only exploited in use cases such as autonomous driving, IoT, virtual reality or industrial automation, for which low latency, increased network stability and increased bandwidth, as well as lower energy consumption, will be critical. If that is the case, will the advances of 5G justify a significant increase in SEP royalties for smartphones? Publicly communicated headline rates for 5G smartphone devices announced by the major licensors represent “a substantial increase in royalties over what they received for 4G”, according to an Ankura study published by IAM last year. Using IPlytics data, Ankura argues that “these rises are not explained by an increased share of patent holding”. But is patent counting enough to understand the value of 5G? Current SEP litigation (Ericsson v Apple; Nokia v Oppo and Vivo; InterDigital v Oppo, among others) has been triggered by the present cycle of upgrading SEP licensing deals from 3G/4G to 3G/4G/5G and the questions of how much additional value 5G brings. It is undeniable that investment in 5G is larger by far compared to all earlier generations (Figure 1), when counting the number of technical standards contributions submitted by standards developers.

Figure 1: Cumulative number of 3G, 4G and 5G technical standards contributions by year of submission at the 3GPP (IPlytics Platform, 2022) 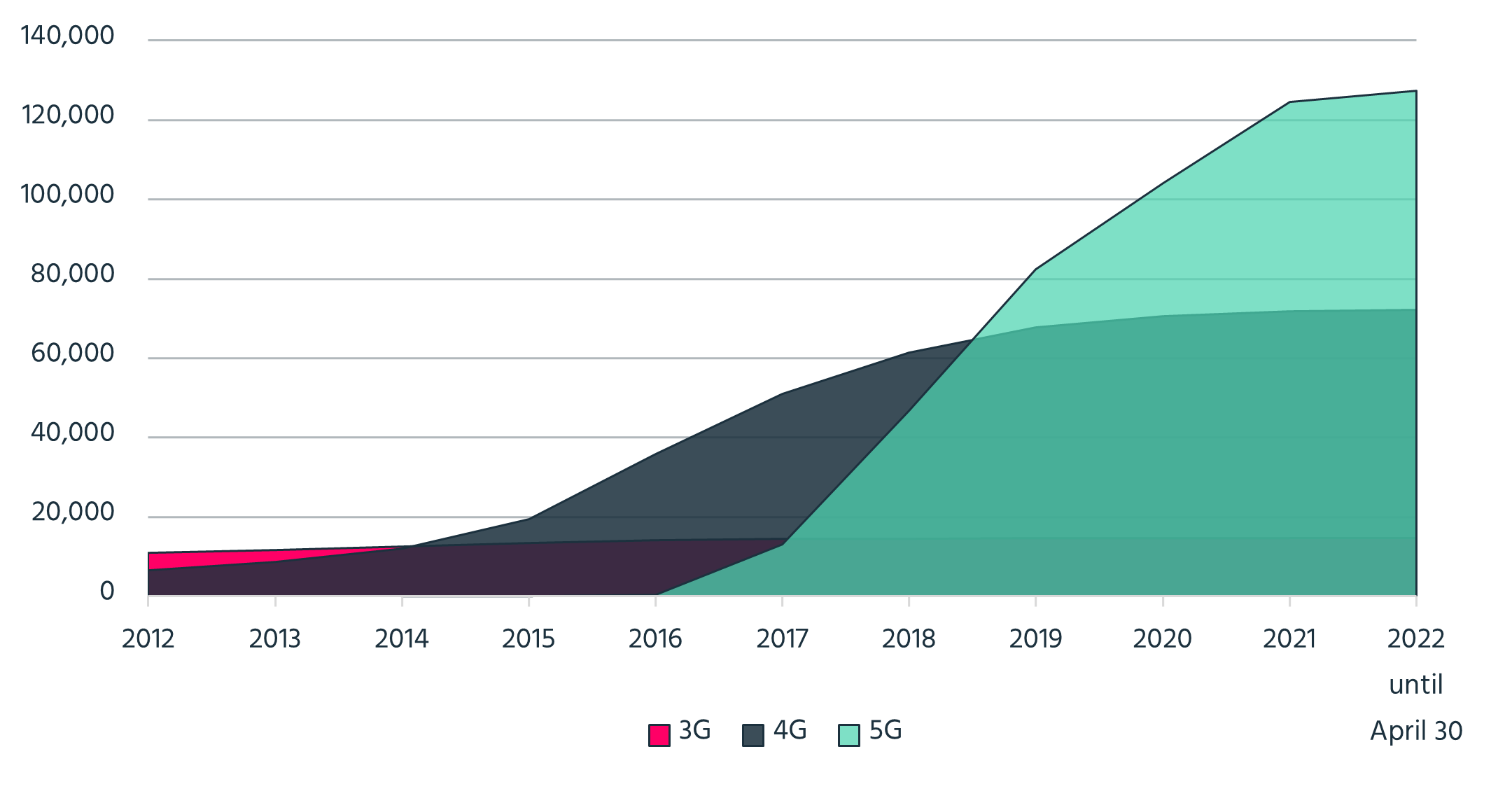 However, the discussion about SEP value is only one challenge. Licensing of 5G SEPs takes place globally, while litigation is local. The rise of so-called anti-suit injunctions shows that international courts are competing to set global FRAND rates. Regulators (including the current EU Commission communications) in different countries compete to set rules for leadership in technology standards innovation and products alongside the related SEP licensing ecosystem, thus influencing the global technology equilibrium. In this context, a balanced framework for SEP licensing on FRAND terms is more important than ever, while competition for 5G leadership goes beyond companies as it is relevant to entire economies. This poses the question: who is leading the 5G patent race?

A recent report by the USPTO argues that “no company or country leads in 5G patenting”. Utilising IPlytics data from May 2021, the report examined both global 5G patent families and triadic patent families in which a patent or application is filed at each of the USPTO, EPO and the Japan Patent Office. Indeed, it is very difficult to crown a winner, especially when the underlying data is based on 5G patents that were self-declared and not checked for essentiality or validity. However, the 5G patent race is more competitive than ever because the licensing of 5G SEPs is set to become one of the most highly lucrative markets, not only when it comes to receiving royalties from SEPs but also in retaining leadership of increasingly competitive industrial value chains. IPlytics data shows that, of the SEP holders that have self-declared at least 10 patent families over the past decade, the number of unique patent owners has risen from 99 in 2010 to 261 in 2021 (by factor 2.6x). The uptick in the number of SEP holders is largely driven by market entrants from China, Taiwan and South Korea, which develop smartphones, network devices, computer chips or semiconductor technology. Figure 2 shows that in Q1 2022, over 50,000 active and granted patent families were declared for 5G following a rapid increase in only four years. 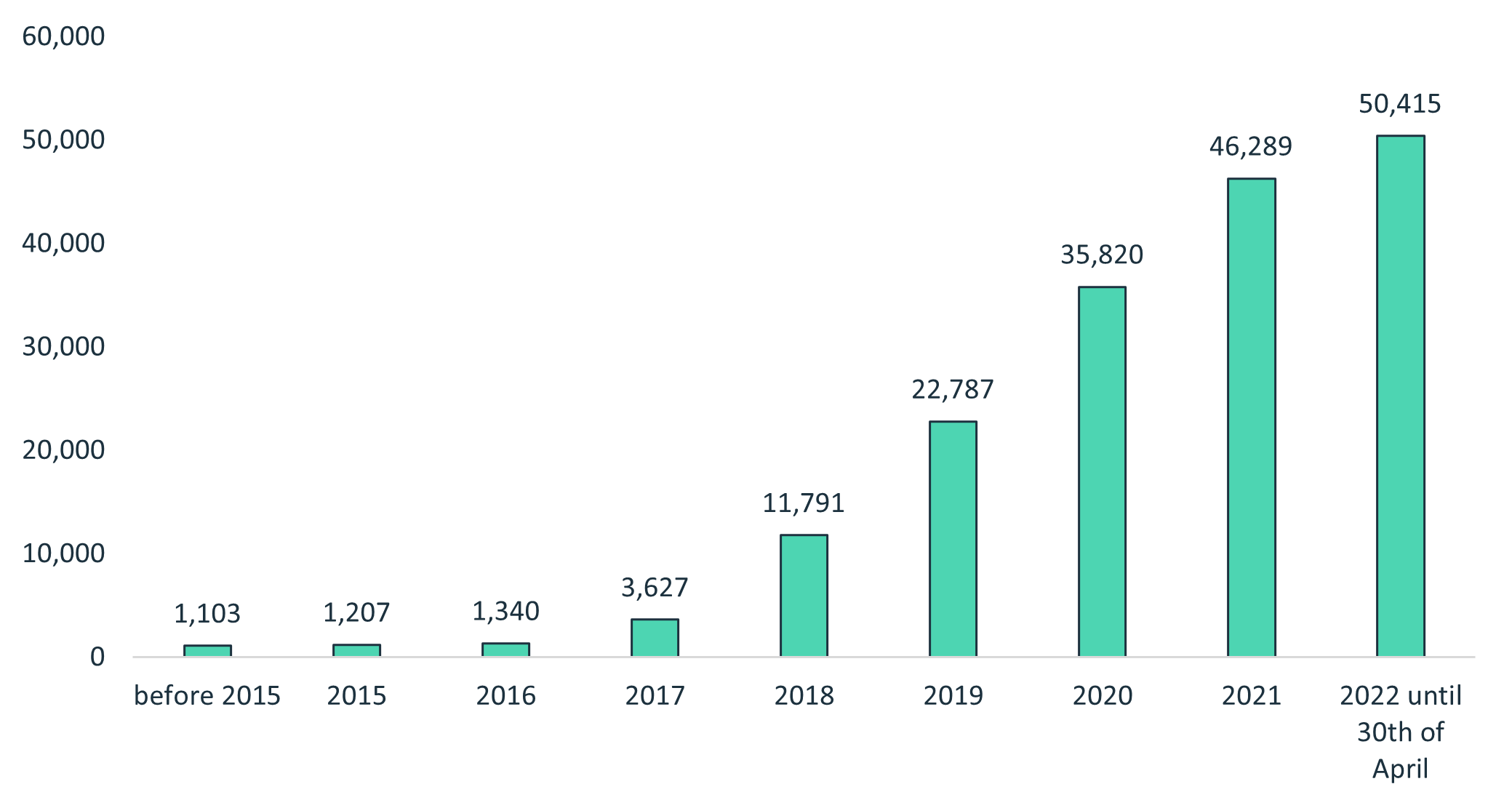 Although it may be difficult to answer the question about who wins the 5G race, we can observe a shift in the cellular industry. While 4G technology development was mostly dominated by US and European companies, Chinese and South Korean companies have led in 5G development with the highest number of active and granted (US or European) 5G self-declared patent families. Figure 3 shows that Chinese organisations (as the headquarters of the current assignee) are leading, even though the 5G patent numbers in Figure 3 only consider European or US granted patent families.

However, not all self-declared patents are essential and valid, while SEPs vary by value – with some covering core technologies of the standard and others only claiming inventions on minor improvements to the standard. One approach to identifying investment in developing 5G technology is to count the number of standards contributions. The IPlytics database enables identification of approved and agreed technical submissions to 5G standards development, ensuring that only technical contributions are counted. Figure 4 reveals that the share of approved technical 5G contributions of European companies, at 37.04%, is much higher compared to that of declared 5G patent families, at 15.59%. Those numbers are difficult to compare, as not all standards are subject to SEPs. Still, the differences of Figures 3 and 4 show that simple patent counting of declared patents may be misleading and more advanced data refinements are needed to make sense of self-declared patent data. 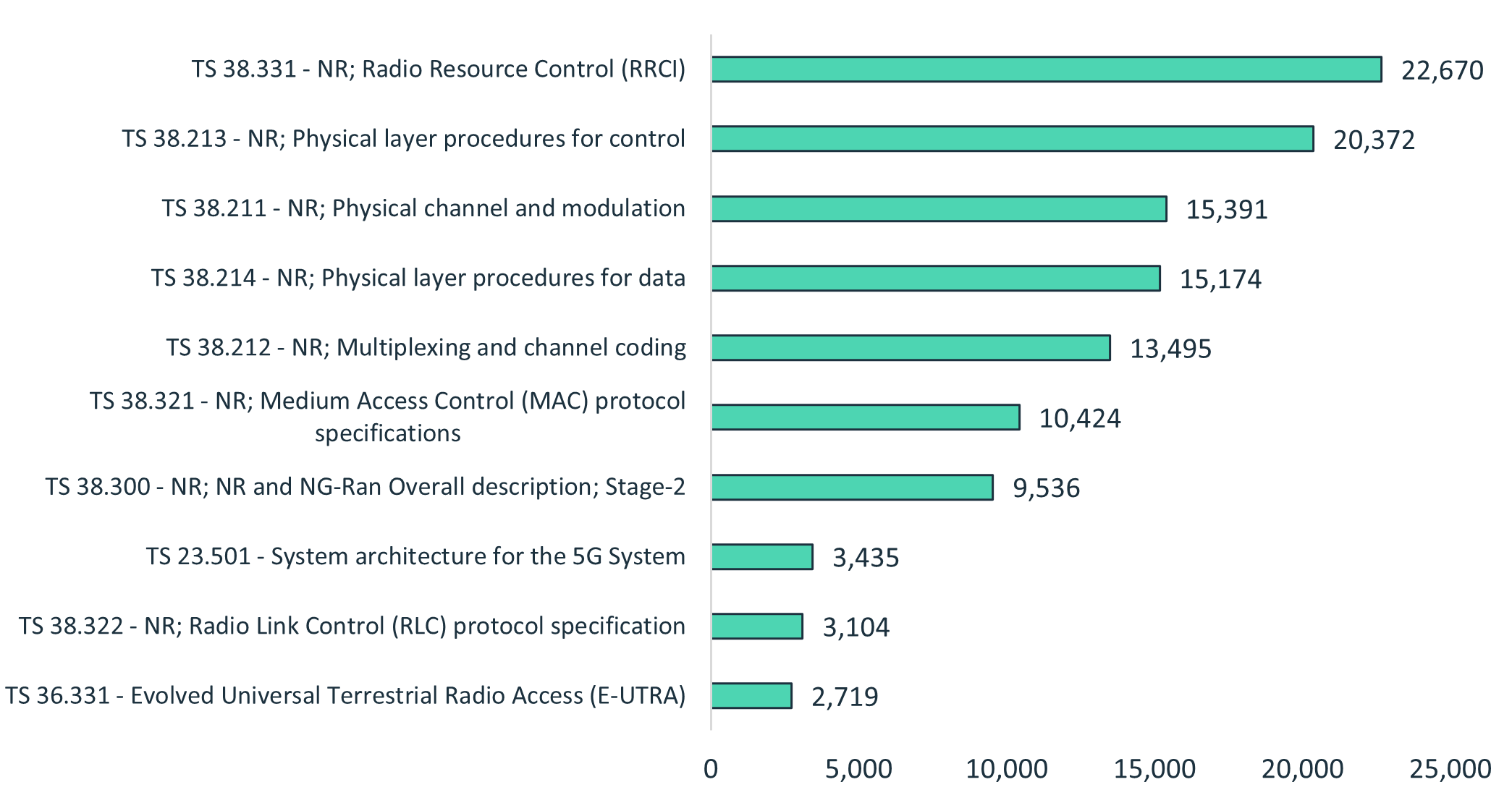 Outlook and the new SEP battlefields

The recent SEP lawsuit against Ford in Munich, resulting in the latter no longer being permitted to sell its cars with LTE-enabled communication tools in Germany, is the tip of the iceberg in the current automotive battlefield of SEP litigation. SEP licensing beyond the smartphone world reveals new challenges and disagreement between SEP holders, licensors and standards implementers, in this case the auto industry, for example regarding where SEPs should be licensed in the value chain, what should be considered a FRAND rate and what should be deemed excessive. While current litigation in the auto industry concerns 3G and 4G SEPs, the question of how much value 5G brings to a vehicle is more difficult to answer when advanced driving systems heavily rely on 5G-enabled connectivity and increasing litigation is anticipated. But adoption of 5G in other industries is expected in the future, as the number of IoT applications that will make use of 5G is endless. One thing is certain: the majority of SEP holders will actively monetise and enforce their SEP portfolios covering 5G standards in this fast-moving, high-investment environment. However, SEP owners as well as standard implementers are faced with the challenge of managing operational and financial risks and cost exposures, while striving to maximise value.

The licensing of 5G SEPs looks set to become a major issue, not only for the handset industry, but for any manufacturing sector that involves connectivity. Senior patent directors, licensing executives or legal counsel should bear the following in mind: