Patent owners for 2G, 3G and 4G have controlled how mobile technologies are used in the smartphone and computer industry over the past few years. Thus, 5G patent owners will likely become technology and market leaders. Any company that owns 5G SEPs may request royalties from an implementer – while this will which create a lucrative market for holders of the relevant patents, it could well be a legal risk for implementers as the royalty amount deemed ‘reasonable’ for 5G patents is impossible to predict. 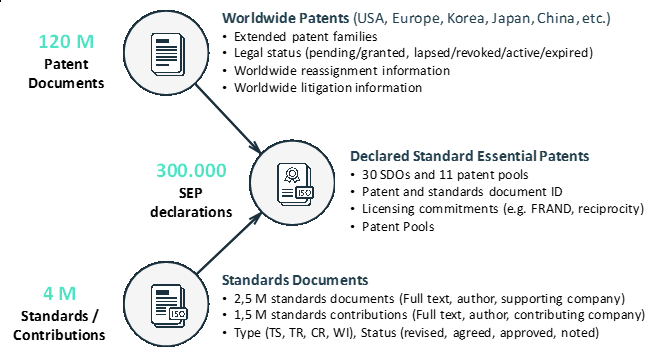 Using IPlytics’s standards, patents and declaration database, Table 1 illustrates the top patent owners of declared 5G patent families. The Chinese company Huawei has the largest declared 5G portfolio, followed by the South Korean companies Samsung and LG and the Finnish company Nokia. Qualcomm and Intel are the largest US companies holding declared 5G patents; Sharp and NTT DOCOMO are the largest Japanese ones. The Chinese companies Vivo Mobile and Guangdong Oppo have newly entered the market. The second column shows the number of 5G families that have been filed internationally (USPTO, EPO or PCT). Here, Samsung has the largest international 5G portfolio followed by Huawei, LG, Nokia and Ericsson (column 2). When counting granted 5G patent families only, again Samsung owns the largest 5G portfolio, followed by LG, Nokia and Huawei. The Chinese companies ZTE (7,4%), China Academy of Telecommunications Technology (CATT) (11,7%), OPPO (9,5%) and Vivo (0%) have very low grant rates as of November 2019. However, the granting process may take several years; since 5G is a recent technology, 5G patents may be just recently filed. One can assume that many of the declared 5G patents will be granted at some point in the future.

Table 1: Top patent owner of 5G declarations as to the number of patent families as to office of application and grant status

Table 2: Top patent owners of 5G declarations as to the number of patent families as to the earliest priority date, earlier 2G, 3G or 4G declaration and relevant groups working on user equipment technologies

Beyond the patent declaration data analysis, it is also worth examining the companies that are actively involved in the 5G standards development. The 5G standard is specified in international meetings in which companies present and submit technical contributions. Using the database and analytics of the IPlytics tool, Table 3 shows the top 30 companies that submitted technical contributions to 5G. Again, Huawei is responsible for most 5G contributions, followed by Ericsson, Nokia, Qualcomm and ZTE.

In many cases, standards contributions are submitted by several companies. In general, there is a main company that is responsible for the contribution and other companies join later to submit it. The first column is a count of all the companies that have been in a group that submitted the standard contribution, while the second column counts contributions for the first contributor only.

5G SEP licensing looks set to become a major issue not only for the handset industry, but for any sector in which connectivity matters. Senior patent managers and patent directors should bear in mind some key considerations concerning 5G patents: