What to watch out for in the SEP landscape

The release of 4G in mid-2000 and the sudden increase in the number of SEPs kicked off the first wave of discussions around FRAND and SEP licensing, which have since reached far beyond the telecoms sector. Today, SEPs are widely discussed across all major industries. The main reason for this is that connectivity is everywhere, and it heavily relies on standards that are subject to SEPs. Fully connected cars that implement 3G and 4G (soon 5G), Bluetooth, NFC, RFID, Qi, HEVC/VVC and DVB, among many others, have been on the market for more than a decade now. Manufacturing companies have set up smart factories using their own private 4G and 5G networks that connect production lines, machines, heavy machines and entire buildings. Home appliances are fully connected, and smart meters collect data on energy consumption in the Cloud. Even the healthcare sector has started to make use of fully connected medical instruments to stream live data during surgeries across devices based on standardised technologies.

New standards projects such as the wireless charging Qi standard – but also organisations outside of the wireless world, such as the Society of Automotive Engineers – are specifying standards subject to SEPs for technologies, such as self-contained mobile fuelling stations or inductive device charging.

The increasing need for and wide implementation of standards is shaping both the market of SEP licensees and SEP holders. Today, it is not just telecoms organisations that hold SEPs. There are automotive companies, including Continental (Germany), Volkswagen (Germany), Daimler (Germany), Nissan (Japan), Toyota (Japan), Denso (Japan) and PSA (France), manufacturing companies such as General Electric (United States), Siemens (Germany), Bosch (Germany) and internet companies such as Google (United States), Amazon (United States) and Facebook (United States). The number of SEP holders has more than doubled in the past 10 years (see Figure 1). When considering the SEP holders that have self-declared at least 10 patent families over the past 10 years the number of unique companies (considering the highest parent of larger groups) has risen from 99 in 2010 to 261 in 2020 (by factor 2.6x). The drastic uptick in the number of new SEP holders is not only driven by those outside of the telecommunication’s world but also by new market entrants, mainly coming from China, Taiwan and South Korea, which develop smartphones, network devices, computer chips, semiconductors, and audio and video technology. 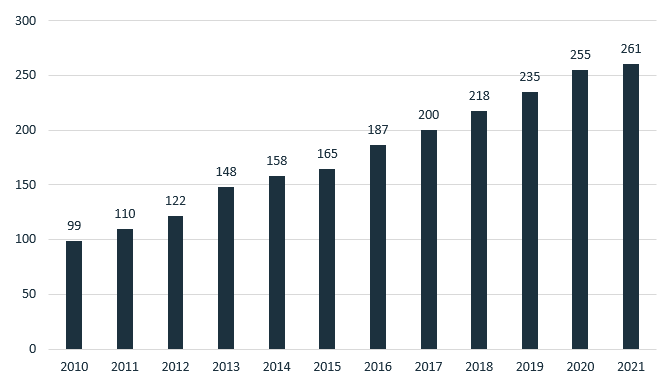 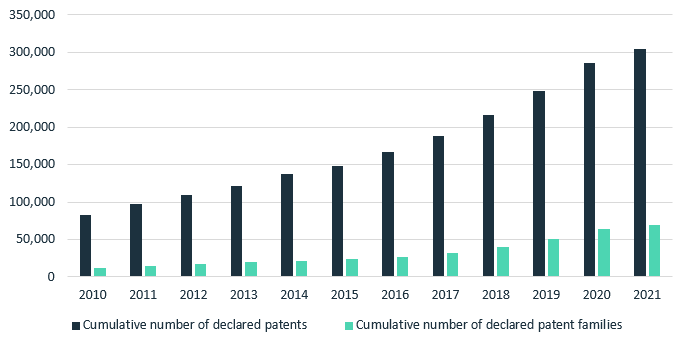 SEPs holders can now be found across a diverse range of industries. This is because SEPs today are crucial to almost any large company actively pursuing R&D. To get a quantitative understanding about the importance of SEPs across industries we had a closer look at the top 50 worldwide patent holders, including the largest worldwide R&D-heavy organisation. When considering the top 30 patent holders in the world, 93% own at least 10 patent families declared as being standard essential. Further, across the top 50 patent holders the number of SEP holders is more than 75% (see Figure 3). Companies that do not own SEPs are typically from the pharma, chemical and manufacturing industries.

Figure 3: The share of SEP holders within the group of worldwide top patent owners 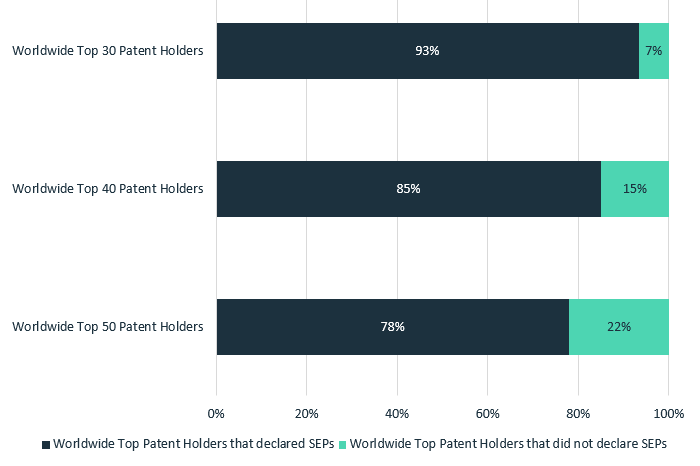 The high share of SEP holders within the group of the largest worldwide patent holders confirms the increasing importance of SEP ownership. But companies do not own SEPs by chance. Patents describing an invention that is essential for technology standards are the outcome of many years of R&D investments and contributions to standards developments carried out by organisations such as, among others, the 3rd Generation Partnership Project, the Institute of Electrical and Electronics Engineers or the International Organisation for Standardisation International Organisation for Standardisation. Standard organisations are both collaborative and highly competitive. However, due to the principle of consensus decision making, it requires considerable research and investment to make technically meaningful and convincing contributions that are accepted, approved and incorporated by all members. Companies can only gain credibility by regularly participating and developing the best standards specifications, which allows them to bring their own developed, and sometimes patented, technologies into the standard.

The increasing number of SEP holders shows that companies across all major industries increasingly contribute to the development and specification of new connectivity standards, as standards are indispensable when connecting devices, vehicles, whole buildings or soon anything that will be part of the Internet of Things (IoT). We are in the middle of the next technology revolution with IoT becoming one of the major technology advances gaining importance across geographies and industries. Consequently, R&D-heavy companies from any industry must have a seat at the table to influence and discuss the future of standardised connectivity technologies, as owning SEPs provides leverage for cross-licensing negotiations. While some industries have become experts in SEPs and standards development, others are only just beginning to get involved. IP professionals as well as directors in standard development should bear in mind some key considerations: