What is a product? It depends on the purpose

Supplementary protection certificates (SPCs) are intended to compensate patentees that own patents to pharmaceuticals or plant protection products for any reduction in the term of the patent caused by protracted drug approval processes. The EU regulations governing the grant of SPCs for pharmaceuticals (former EU Regulation 1768/92, now codified by EU Regulation 469/2009) and plant protection products (EU Regulation 1610/96) largely correspond with one another, as indicated by the fact that some of the recitals and articles of the current Regulation 1610/96 apply expressly to the earlier Regulation 1768/92 (eg, see Recital 17 of Regulation 1610/96). Requests for SPCs should be filed with the respective national authorities, which have the power to grant or refuse SPCs and to decide on questions of enforcement. If it becomes necessary to interpret the language of the regulations in the course of proceedings, the European Court of Justice (ECJ) is the ultimate interpretive authority.

Since these regulations entered into force, the ECJ has had plenty of opportunities to provide guidance on interpretation. Most of its judgments on SPCs appear to relate to Article 3, which in both regulations sets out the conditions for obtaining an SPC. A clear summary of the most relevant recent ECJ decisions focusing on Article 3 of Regulation 469/2009 can be found in Biotechnology Law Report (October 2014, Vol 33, No 5: 171-180). However, the most recent ECJ decision, C-631/13, issued in 2015, concerns Article 1(b) of Regulation 469/2009, in addition to Articles 3(a) and 3(b). Article 1 provides the definitions applied in the regulation, with Article 1(b) specifically defining a ‘product’ as follows: “For the purpose of this Regulation, the following definition shall apply: a) […] b) ‘product’ means the active ingredient or combination of active ingredients of a medicinal product.”

As one previous milestone decision has already focused on Article 1(b), this article summarises both the previous case (C-431/04) and the recent case (C-631/13), and outlines the conclusions drawn by the ECJ.

The question underlying Case C-431/04 (Massachusetts Institute of Technology) was whether an SPC could be granted for a product consisting of a cytotoxic compound (carmustine) in combination with a slow release matrix (polifeprosan), which itself has no therapeutic activity. Despite having no therapeutic activity, polifeprosan is indispensable for the sustained release of the well-established compound carmustine – without this matrix, carmustine cannot be used in a therapeutically relevant manner. The German Patent and Trademark Office rejected the request for an SPC, with the Federal Patent Court confirming this decision. Upon appeal, the Federal Court of Justice decided to refer the case to the ECJ, asking whether, according to Article 1(b), it is a requirement that both components of a composition be therapeutically active drugs or whether a composition comprising a therapeutically active substance and another component which is required to administer the drug in a therapeutically relevant manner might qualify as a “combination of active ingredients of a medicinal product”.

The ECJ first stated that in the absence of a definition of the concept of ‘active ingredient’, the meaning and scope must be determined according to context and common understanding. It was considered “common ground… that the expression ‘active ingredient’ is generally accepted in pharmacology not to include substances forming part of a medicinal product which do not have an effect of their own on the human or animal body”. Further, considering the preparatory documents and in particular EU Regulation 1610/96 – which requires that a compound eligible for SPC protection have “general or specific action against harmful organisms or on plants” – and in an attempt to prevent evergreening of SPC protection, the ECJ concluded: “Article 1(b)... must be interpreted so as not to include in the concept of ‘combination of active ingredients of a medicinal product’ a combination of two substances, only one of which has therapeutic effects of its own for a specific indication, the other rendering possible a pharmaceutical form of the medicinal product which is necessary for the therapeutic efficacy of the first substance for that indication.” An SPC for this combination was thus not considered to comply with the definition of Article 1(b) of Regulation 469/2009.

The situation was slightly different in Case C-631/13 (Forsgren). Here, the question was whether a particular carrier protein (protein D – an immunoglobulin G binding protein of Haemophilus influenza known to have therapeutic activity against that bacterium) in a vaccine approved by the European Medicines Agency (Synflorix by GlaxoSmithKline) was eligible for individual protection by an SPC. The vaccine Synflorix is composed of 10 pneumococcal polysaccharide serotypes, eight of which are conjugated (ie, covalently bound to protein D as a carrier protein). In addition to the polysaccharide-carrier conjugate, the vaccine preparation contains aluminium phosphate as an adsorbent, sodium chloride and water. The Austrian National Authority (Patent Office and Supreme Patent and Trademark Adjudication Tribunal) acknowledged the following facts:

However, the referring court still doubted that protein D could be the subject of an SPC, because it is covalently bound to another molecular entity. This covalent bond changed the subject matter of the SPC request (“free protein D”) as compared to the product of the marketing authorisation (“bound protein D”): protection was sought for protein D itself, rather than a protein D-polysaccharide conjugate, which was a different molecular entity. The court noted that this was a different situation from that in two previous rulings, namely Medeva (C-322/10) and Georgetown University I (C-422/10), where the product subject to the marketing authorisation was present alongside other active ingredients, rather than covalently attached. Further, the referring court was not certain whether protein D was encompassed by the vaccine’s marketing authorisation for the purpose of Article 3(b) of the SPC regulation, since the marketing authorisation mentioned protein D only as a carrier protein and expressly indicated that no evidence of an independent effect as a vaccine against Haemophilus influenza was presented.

In its judgment, the ECJ first observed that the term ‘active ingredient’ found in Article 1(b) of Regulation 469/09 is not defined in the regulation, but has previously been interpreted by the ECJ in Case C-431/04. In particular, the ECJ held in that previous judgment that “it is generally accepted in pharmacology that the term ‘active ingredient’ does not cover substances forming part of the medicinal product which do not have an effect of their own on the human or animal body”. Later on, this interpretation was consolidated when Article 1 of EU Directive 2001/83/EC was subsequently amended to define ‘active substance’ (understood as equivalent to active ingredient) as “any substance or mixture of substances intended to be used in the manufacture of a medicinal product and that, when used in conjunction, becomes an active ingredient of that product intended to exert a pharmacological, immunological or a metabolic action with a view to restoring, correcting or modifying physiological functions or to make a medical diagnosis”. However, since none of the regulations distinguishes between free and covalently bound active substances or ingredients, the ECJ concluded in the present judgment that “it is not appropriate to exclude… the grant of an SPC for such an active ingredient”. In other words, it is not decisive whether the active ingredient is covalently attached to another ingredient. This may be good news for patentees seeking an SPC for an active ingredient that is covalently bound to another (active) ingredient in the marketed product.

Second, the ECJ considered whether protein D was subject to SPC protection, even though its therapeutic effect did not fall within the therapeutic indications covered by the wording of the marketing authorisation. In reaching this conclusion, it considered that, according to Article 3 of Regulation 469/2009, four requirements must be fulfilled in order to obtain an SPC – one of which is that the ingredient which is the subject of the SPC request has been granted a marketing authorisation as a medicinal product (Article 3(b)). The ECJ referred to Article 4 of the regulation, emphasising that “the protection conferred by a certificate is to extend only to the product covered by the authorisation to place the corresponding medicinal product on the market and for any use of the product as a medicinal product that has been authorised before the expiry of the certificate”.

As an additional thought, the ECJ mentioned that an SPC protecting a medicinal product allows for the opposition of the marketing of any other medicinal product containing the same active ingredient, together with another active ingredient approved for the same therapeutic indication. Therefore, if an SPC for protein D individually had been granted, the use of protein D in conjunction with any other compound for the same therapeutic indication could have been prevented by the SPC owner.

Last but not least, the ECJ briefly addressed the final question of the referring court – whether an ingredient which is not active on its own, but enhances the activity of another active ingredient may be made the subject of an SPC. Earlier case law, which excluded substances that have no therapeutic effect (eg, adjuvants) from SPC protection, was held not to apply here, since protein D was not used as an adjuvant. The ECJ then changed the question that it was supposed to answer, focusing again on Article 1(b) and asking whether a carrier protein conjugated to a pneumococcal polysaccharide used in a vaccine for paediatric use may be regarded as a product in the sense of Article 1(b) – that is, an “active ingredient or combination of active ingredients”. Analogously to an earlier case pertaining to plant protection products, the ECJ tried to establish whether a carrier protein conjugated with a polysaccharide antigen and which has no immunogenic effect of its own that is covered by the wording of the marketing authorisation can be categorised as an active ingredient, in compliance with Article 1(b). The ECJ found that neither the regulation nor an analogy with the judgment in Bayer CropScience (C-11/13, in which a safener was found to be eligible for SPC protection if it exhibited plant protective activity on its own) settled that matter. As in previous decisions, the ECJ had recourse to the objective of the regulation, as reflected by sub-paragraphs 4 and 5 of paragraph 28 of the Explanatory Memorandum to the Proposal for a Council Regulation (EEC) of April 11 1990, concerning the creation of an SPC for medicinal products (COM(90) 101 final), and stated that the protection conferred by an SPC is largely intended to cover the cost of research leading to the discovery of new products. Why protein D would thus be ineligible for an SPC remains vague from the reasoning of C-631/13.

The ECJ held, in light of the wording and purpose of the regulation, that Article 1(b) does not permit a carrier protein conjugated with a polysaccharide antigen by means of a covalent binding to be categorised as an ‘active ingredient’, unless it is established that it produces a pharmacological, immunological or metabolic action of its own which is covered by the therapeutic indications of the marketing authorisation.

It appears that an ingredient of a pharmaceutical composition covalently bound to another active ingredient is not precluded per se from protection by an SPC. However, to qualify for protection: 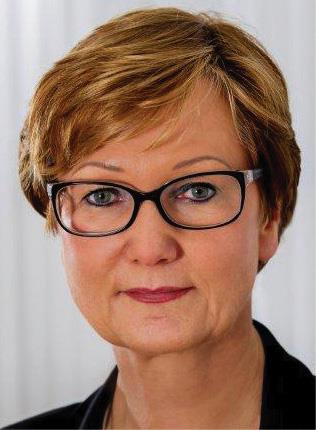 Heike Vogelsang-Wenke is a partner in the life sciences department of GRÜNECKER, one of Europe’s largest and most reputable IP law firms. She has diplomas in both biology and chemistry from the Julius-Maximilian University of Würzburg and a PhD from the Ludwig Maximilian University in Munich, with research at the Max-Planck Institute for Biochemistry, and is qualified as a German and European patent attorney. Dr Vogelsang-Wenke focuses on prosecuting patent applications in the life sciences sector, opposition and appeal proceedings as well as opinion work. She is active on the German Patent Attorney Board and is a member of the Biotech Committee of the German Patent Attorney Bar Association, as well as the Council of European Patent Attorneys.