The Turin Court of Appeal has recognised that the shape of Piaggio’s famous Vespa scooter is protected as both copyrightable material and a 3D trademark. 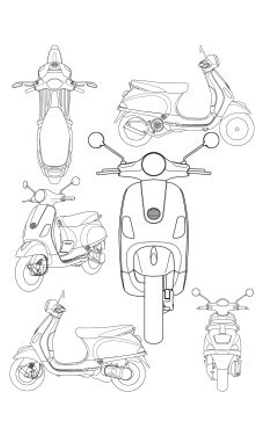 After Piaggio supplied evidence of the acquired secondary meaning of its Vespa scooter in 2013, it successfully registered the scooter’s shape as an Italian and European 3D mark.

Piaggio moved to enforce its Italian registration during the EICMA trade show in Milan in November 2013. It obtained the seizure of three scooter models – Cityzen, Revival and Ves – exhibited by the Chinese companies Zhejiang Zhongneng Industry Group, Taizhou Zhongneng Import and Export Co (collectively referred to as Znen). The first two models were protected as registered Community designs.

After the seizure, Znen filed an action before the Justice Court of Turin, asking it to declare that its scooters did not infringe Piaggio’s rights and that the 3D trademark protecting the shape of the Vespa scooter was void for:

Article 9 states that no sign can be registered as a (3D) trademark if it consists solely of a shape dictated by the nature of the product, a shape of the product necessary to obtain a technical result or a shape that adds substantial value to the product.

Piaggio not only rejected Znen’s claims and asked the court to confirm the validity of its 3D mark, but also requested the court to ascertain that the Vespa shape enjoyed protection under Article 2.10 of the Italian Copyright Law as a work of industrial design.

The Justice Court of Turin rendered its first instance decision (1900) on 6 April 2017. The court rejected Znen’s claims and confirmed both the validity of Vespa’s mark and its protection under the Italian copyright law.

In particular, the court confirmed that Piaggio’s trademark rights for the Vespa shape were not anticipated by Znen’s 2007 and 2010 designs. The 3D registration was granted in 2013, on the basis of its secondary meaning. However, the shape for which Piaggio obtained protection was that of the Vespa LX scooter launched in 2005. The court concluded that it had enjoyed protection since then as a common law trademark, thus anticipating the designs registered by the Chinese companies. The court also confirmed the distinctiveness of the 3D trademark, in particular due to the following four features that have characterised the Vespa since its creation in 1946 and allow consumers to reconnect it to the producer and distinguish it from all the other scooters on the market:

The court also confirmed the validity of the trademark according to the requirements of Article 9 of the Italian Industrial Property Code. The court stated that the shape of the Vespa is not imposed by the nature of the product, nor is it necessary to achieve a technical result or add substantial value to the product. Further, it recognised that the shape of the Vespa is an industrial design, and deserves copyright protection as such. It declared the infringement of Piaggio’s trademark and copyright of the Vespa by the Chinese scooters and added that Znen were also guilty of unfair competition.

Znen appealed the decision before the Court of Appeal of Turin. The latter has now rejected the appeal, confirming the first instance decision, with ruling 677 on 16 April 2019.

This decision will have a great impact on the protection of shapes (in Italy, at least). It clarifies that shapes can be simultaneously protected under different rights. Rights holders now have the possibility of relying on different types of protection, as a product shape may be protected as a design, trademark or a copyrighted work of industrial design.

With regard to the simultaneous protection of a shape through a trademark and copyright, the Turin Court of Appeal clearly stated that “the fact that Piaggio requested – and obtained from the court in first degree – protection under the copyright law, and that, more generally, the shape has undoubted aesthetic and artistic qualities” does not compromise the validity of the 3D trademark. In fact, according to the Court of Appeal, consumers chose the Vespa scooter both “for its well-known quality in terms of performance, safety and reliability” and for its “aesthetic qualities”.

The Court of Appeal continued:

Nor, does the recognition of the possibility to protect the shape of the Vespa scooter through copyright, due to its creative and artistic value, necessarily entails the identification of these characteristics with the ‘substantial value’ that would prevent registration as a trademark. We are aware that a different case law exists, as documented by the judgments quoted by the appellant. However, this court agrees with the first instance judges that the two protections [trademark and copyright] may coexist, if the requisites for each one are present. There is no express prohibition for this in the law. And in the present case, we did not find the impediments mentioned in art. 9 of the IP Code either.

This decision challenges those who do not believe that protection through trademark and copyright can coexist. On the other hand, it calls for creators of innovative product shapes and their consultants to make careful choices in order to prepare an effective defence against infringers.