The Beijing High Court has upheld a trial court decision concerning Unilever’s administrative proceeding against Lian Hua’s filing of a trademark application. This application was ruled to have exhibited Lian Hua’s bad faith at the time of filing.

’ trademark registrations in China, designating laundry preparations and other goods in Class 3. Unilever’s OMO marks have strong brand awareness among Chinese consumers as a result of decades of use and promotion.

’ 12156179 mark for “germicidal burners; Heating apparatus, electric, among others” in Class 11, and obtained registration on 6 September 2014. Lian Hua also uses the stylised form of the mark, surrounded by a splashed water device, which closely resembles Unilever’s OMO marks. 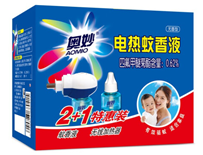 On 28 February 2018, Unilever initiated an invalidation action against the mark before the China National Intellectual Property Administration, but to no avail.

In 2019, Unilever brought an administrative proceeding before the Beijing Intellectual Property Court, which opined that:

Based on this, the court issued a ruling invalidating the mark, citing Article 13.3 of China’s Trademark Law on 19 December 2019.

The Supreme People’s Court elucidated in (2016) Zui Gao Fa Xing Zai No13 re The Procter & Gamble Company v TRAB and Shantou Weishida Cosmetics Co Ltd that “To determine whether the applicant is acting in bad faith, all relevant factors must be taken into consideration ... The mere fact of being well-known is insufficient. The court shall consider the subjective intention, the objective behaviour and all relevant factors. In plain English, assessment of the applicant’s bad faith shall be based not only on the circumstances existing at the time of filing, but also on the applicant’s behaviour afterwards.

Lian Hua’s registered trademark is a slavish copy of Unilever’s well-known OMO trademark, which exhibited bad faith at the time of filing. Regarding the use of the litigious trademark, Lian Hua mimics the font, colour and background pattern (splashed water) of Unilever’s OMO laundry detergent, thus substantiating its bad faith after the date of filing.

Article 11.3 of the “Beijing High People’s Court Guidelines for the Adjudication of Cases Involving Granting and Affirmation of Trademark Right” enumerates the elements to be factored into granting protection of a well-known trademark:

“The protection scope of a well-known trademark shall be determined by taking comprehensively into account this trademark’s distinctiveness, reputation, the extent of similarity between the trademarks, the designated goods, to what extent the relevant public of the trademarks overlaps and the extent of attention of the relevant public, the subjective state of the applicants of the litigious trademark, among others.”

The guidelines align with the Supreme People’s Court’s reasoning in the Weishida case that bad faith can be proven by examining facts that are relevant after the date of filing of the litigious trademark.

This is the first judicial well-known trademark recognition of OMO’s Chinese mark and is likely to prove extremely helpful to future enforcement actions involving the OMO mark in China.