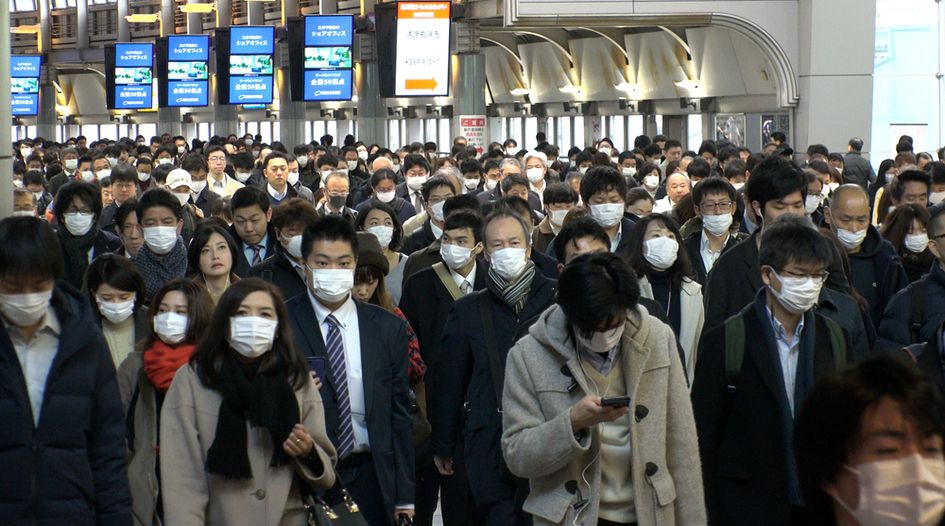 Sixteen Japanese companies in high tech and healthcare have pledged not to assert patents against any activity whose purpose is to stop the spread of covid-19, in an Open Covid-19 Declaration formally launched today. And their efforts are set to get a boost as the Keidanren, an influential business lobby, calls on its members to make the same declaration.

IP owners that make the declaration pledge not to assert patents, utility models, designs or copyright against “any activities whose purpose is stopping the spread of covid-19, including diagnosis, prevention, containment and treatment”. Signatories can seek to add additional limitations, or adjust the period of the declaration, which by default runs from the present until the World Health Organization declares the end of the pandemic.

“We can easily imagine how IP could be a barrier to getting into a new business immediately”, says Hisao Yamasaki, a co-originator of the initiative. Yamasaki, a former Hitachi IP executive who currently holds positions with Syndefense, Unified Patents, the LOT Network and several other entities, says the idea came as he began to observe major companies re-tool their business to create new products like face masks in response to the outbreak.

The purpose of the declaration, Yamasaki tells IAM, is to reduce the time and money companies addressing the crisis must spend on investigating infringement risks and securing appropriate licenses.

Yamasaki says his first call was to Canon executive officer Hideki Sanatake, who became the declaration’s co-originator. Within just one day, Sanatake and managing executive officer Kenichi Nagasawa received approval from CEO Fujio Mitarai to put Canon’s weight behind getting the initiative off the ground.

Mindful of the need to get buy-in from healthcare and life sciences firms, Yamasaki also enlisted the help of Professor Fumikiho Matsuda, head of Kyoto University’s Center for Genomic Medicine. Yamasaki and Matsuda co-founded a venture company called GenoConcierge, which commercialises innovations in genomic medicine and also signed onto the patent declaration.

The result is a founding group of members which draws from the technology, automotive and healthcare industries. Canon, Nikon and Rohm are joined by Toyota, Honda and Nissan. Also making the pledge are LSI Medience and SRL Inc, two major diagnostics firms which provide covid-19 testing. Teijin Limited, whose business spans chemicals, pharmaceuticals and IT services in the healthcare field, is another notable inclusion.

Yamasaki says the non-assertion pledge currently covers nearly 300,000 total patents. Among the signatories, Canon and Teijin appear to be two of the most active enforcers of US patent rights.

Notably, Softbank Corp and Yahoo Japan made Open Covid-19 Declarations as well. Both are subsidiaries of Softbank Group, which also owns Fortress Investment Group (and did not itself sign up). The US firm drew criticism last month for backing a US patent assertion against diagnostics company BioFire. Fortress later said it would make patents available on a royalty-free basis for covid-19 tests.

The Open Covid-19 Declaration may be set to get a further boost as the Keidanren, a big business lobby once described by the Economist as “one of the country’s most powerful institutions”, today sent a letter to its 1,400 members calling on them to support the initiative. Yamasaki adds that he will also be reaching out to companies in China and Korea to assemble a regional group.

The Covid-19 Declaration shares a common impulse with the Open COVID Pledge launched by United States-based professors Mark Lemley, Jorge Contreras and Jennifer Doudna in late March. Yamasaki says that he has had some discussions with Lemley about possible avenues for collaboration since they became aware of each others’ projects.

One key difference is that the Japanese declaration signatories are providing a covenant not to sue, rather than a licence. Yamasaki says he received legal advice that a licence would need to be signed by both parties to be valid in Japan.

“Under our arrangement, there is no need to notify the patent owner that you’re going to use their technology”, Yamasaki says. That is in keeping with the goal of minimising the time and cost burden on potential technology implementers, but it may also make it difficult for patent owners to make sure their rights are not being infringed after the term of the declaration ends.

While the declaration has attracted some big names, there are also major Japanese patent owners who do not appear to be taking part. Yamasaki says that one key question being posed by some chief executives is: “what is the benefit to us?”.

But Yamasaki rejects the idea that the principal benefit is publicity or demonstrating good corporate citizenship, countering that it is firmly grounded in another form of self-interest: “If this current situation takes longer, then even companies with good patents are going to die.”