The surprising impact of Alice on the patent markets

The US Supreme Court’s Alice decision was predicted to have a significant impact on the deals market, but the results were not what we expected

The US Supreme Court’s decision in Alice Corp v CLS Bank International was supposed to be the end of business process patents as we know them and an existential threat to software patents. Enormous resources were expended trying to evaluate Alice risk across large portfolios, with some clients reporting that between 30% and 40% of their patent portfolio had been wiped out. Since Alice, the USPTO has issued multiple rule interpretations on patent examination practice in light of the decision.

So what has happened to the brokered patent market? One would naturally think that software-related business process patents cratered. Our initial intuition was that prices – to the extent that you could even sell a patent in the areas affected by Alice – would be so low that patents were not worth selling. When we spoke to industry practitioners, such a devaluation was their expectation as well. But this is why we conduct data analysis – because, ultimately, Alice did not have the impact that we would have expected.

We reviewed our database of more than 150,000 patent assets for sale on the open market. Large corporate patent-buying clients buy through us and we provide them with information about what is available on the market and the market dynamics in their areas of interest. For this report, we looked specifically at the brokered market. This data segment represents the quasi-public portion of the patent market and is accessible to those who have the resources to contact all the brokers and sellers, and then evaluate their patent offerings. With approximately 1,000 deals coming to the market each year, the task is daunting. We enjoy evaluating this market because brokers tend to provide better information about the assets that they have for sale, as well as the pricing information, and it provides us with an opportunity to track what happens to the patents over time (for more on this market, see our latest annual patent market report, “The 2018 brokered patent market”, Richardson et al, IAM 93 (November/December 2018)).

Overall, Alice has had a small impact on everything except the selling prices of packages that actually sold in the patent market. However, it has not affected the number of packages available on the market, the number of sellers and buyers, or the types of seller and buyer. Indeed, corporations and NPEs continue to buy Alice-affected patents.

Figure 1. Number of Alice-affected packages by year of listing 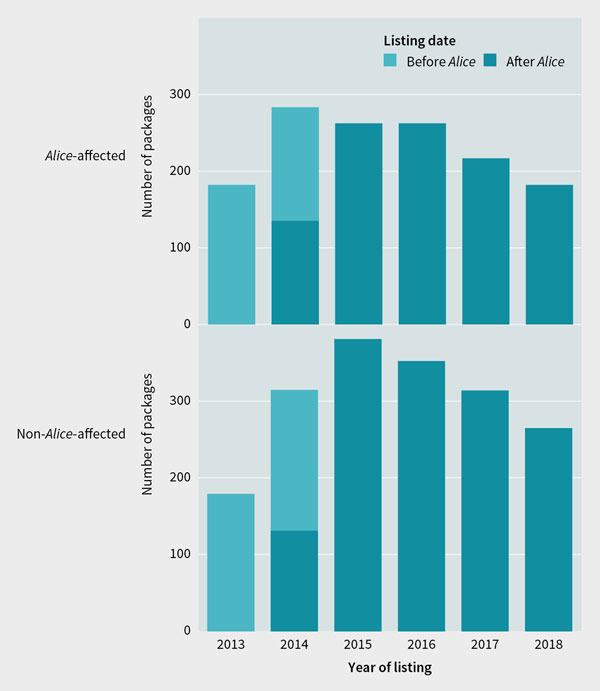 Alice hit and run – what does ‘Alice-affected’ mean?

What is in a typical patent package? A broker will usually provide:

For each patent package, we capture around 20 unique features of the package and write a summary of what is included.

When we begin an analysis like this, we review our entire database and identify the patent packages that fit within a defined class of offerings. For this report, we excluded any confidential deals, any deals that appeared extraordinary in nature and any deals with more than 200 assets. After that, we excluded the outlier deals by eliminating the top and bottom 5% of all deals by price. We then classified each deal according to its primary technology area. This left approximately 3,200 packages covering 70,000 assets in the study.

(As a side note about the data, although we have been tracking packages since 2009, in 2013 we switched to tracking all available packages on the market. Therefore, 2013 is a less complete year for package information.) 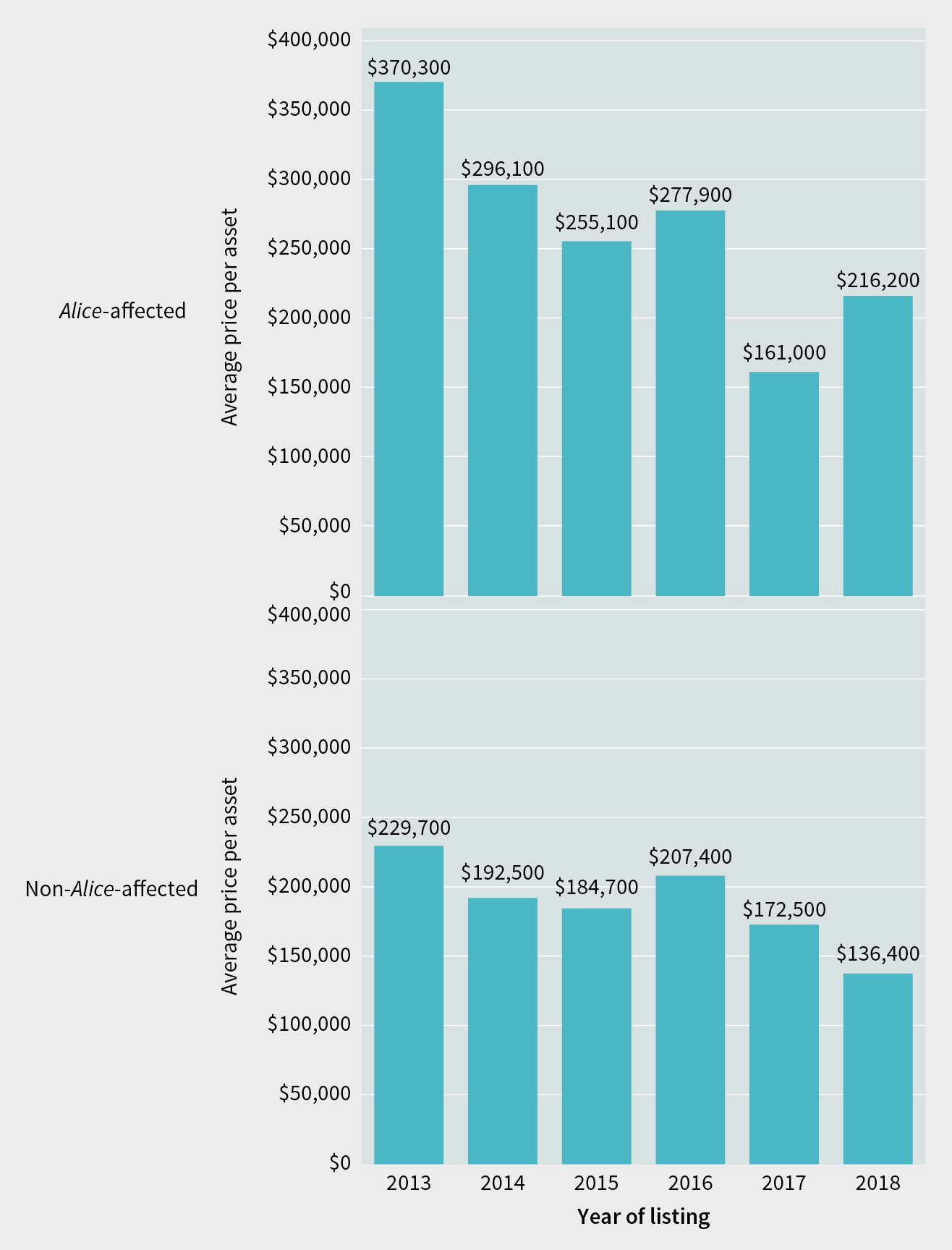 Did Alice shrink the market?

Next, we looked at the number of Alice-affected packages coming to the market in each major technology area. Interestingly, the number of business process patents – which one would have thought would be most affected by Alice – essentially remained the same post-Alice. Despite complaints regarding the negative effects of the decision, what we see is that sellers are willing to bring those packages to market.

As we have noted in the past, working with brokers is a preferred way to sell patents. Indeed, we often refer clients directly to brokers, as they are skilled in finding buyers, packaging assets, setting realistic sales prices and managing the entire process. The following brokers have brought at least four Alice-affected packages to market in the past five years:

A closer look at pricing reveals some interesting characteristics among patents that have sold compared to those that have not. Patents that were sold but were not affected by Alice maintained their asking price (actually increasing by 1.4%). Patents that were sold and affected by Alice fell in asking price – dropping 37%. This may be a better illustration of the impact that Alice has had on the market; when sellers wanted to sell their patents, they came to the market with lower asking prices post-Alice.

Within the technology areas affected by Alice, there has been an overall decline in pricing, with the biggest decline in system infrastructure software, which fell from $358,000 per asset to $172,000 per asset. However, we believe that the overall malaise in the patent market accounts for most of the changes in pricing. It is also interesting that business process patents – which were the most likely to be affected by Alice – have experienced the smallest decline in price. Whether business process patents are actually selling at those prices is another question.

Table 1. Asking prices before and after Alice 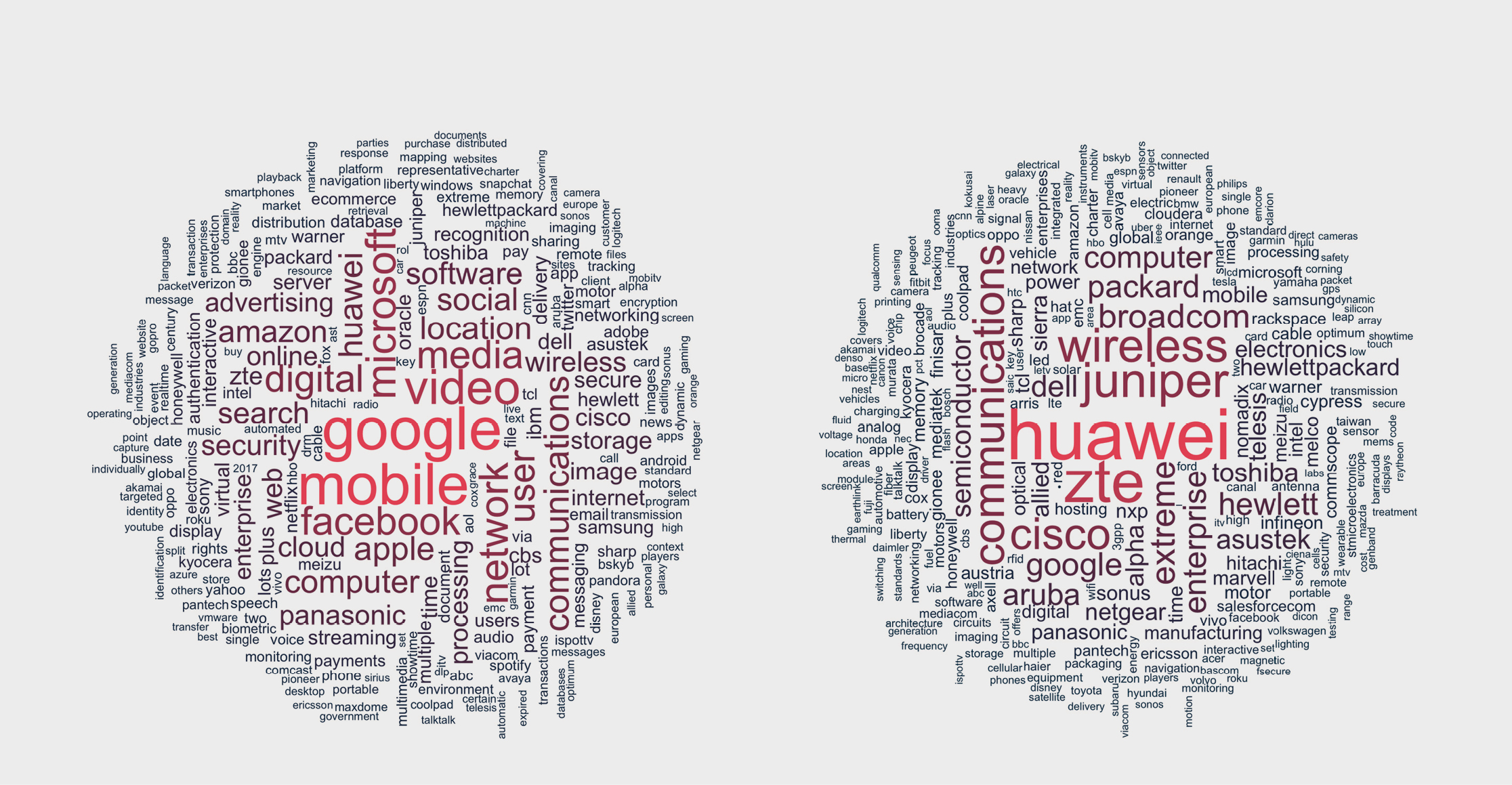 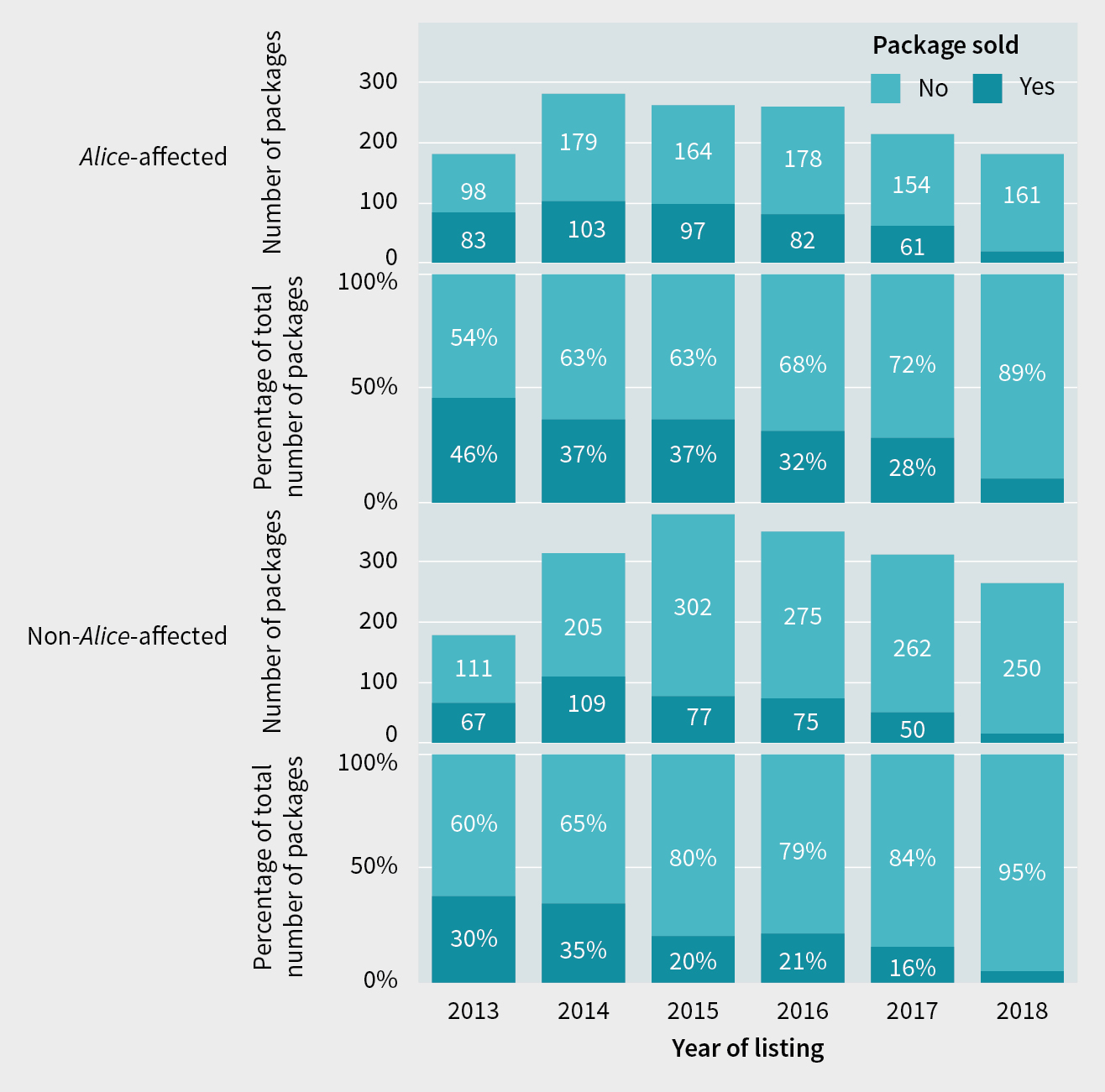 Figure 7 shows the sales rate by the year of sale. Specifically, the graphs are colour coded to indicate the original year of listing for a package. Overall, there are more Alice-affected package sales than before Alice. This indicates that the market began to understand the Alice risk and adapted. In fact, the graph depicts a large increase in 2017 sales of Alice-affected assets. As such, Figure 7 also illustrates the point that sales can take many years to complete.

Although there is a distinct advantage to making your diligence and purchase decisions early (ie, within four months or less), buyers will continue to purchase patents that have been on the market for years. In our experience, patent packages address specific buying needs. Patents are not purchased ahead of need, so until that specific need arises, those assets will linger on the market. Patents that never sell typically have a fatal flaw or are simply too specific to suit a need.

Are buyers and sellers of Alice-affected assets changing?

Not really, although defensive aggregators are picking up more Alice-affected assets.

Figure 9 compares the types of buyer before and after Alice, and whether their assets were Alice-affected. Although there have been very few changes, defensive aggregators have increased their share of purchases from 21% to 27% of all packages. It could be that buyers want their defensive aggregators to take the risk of Alice-affected assets off the street but corporations do not feel that they can directly use these assets. While NPE buying has declined slightly (from 37% to 34%), their non-Alice-affected buying has increased from 43% to 45%. This illustrates a shift in preference as NPEs move from Alice-affected to non-Alice-affected packages. However, if NPEs are experiencing substantial problems in asserting Alice-affected patents, one would expect a much steeper decline in their purchases of these assets. Overall, the data shows no such decline.

Table 2 highlights the repeat sellers and buyers that have participated in at least four Alice-affected transactions since the decision. 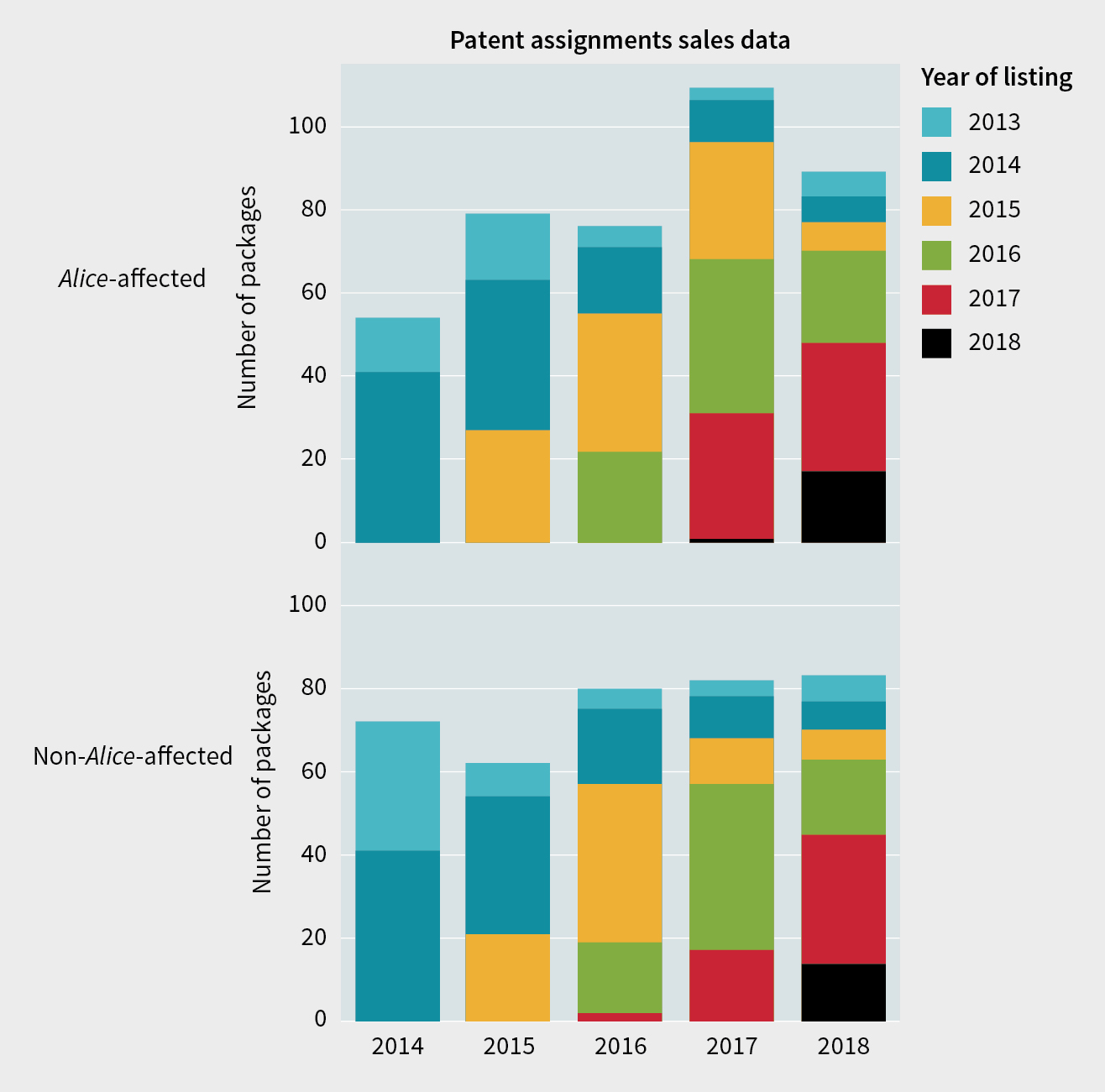 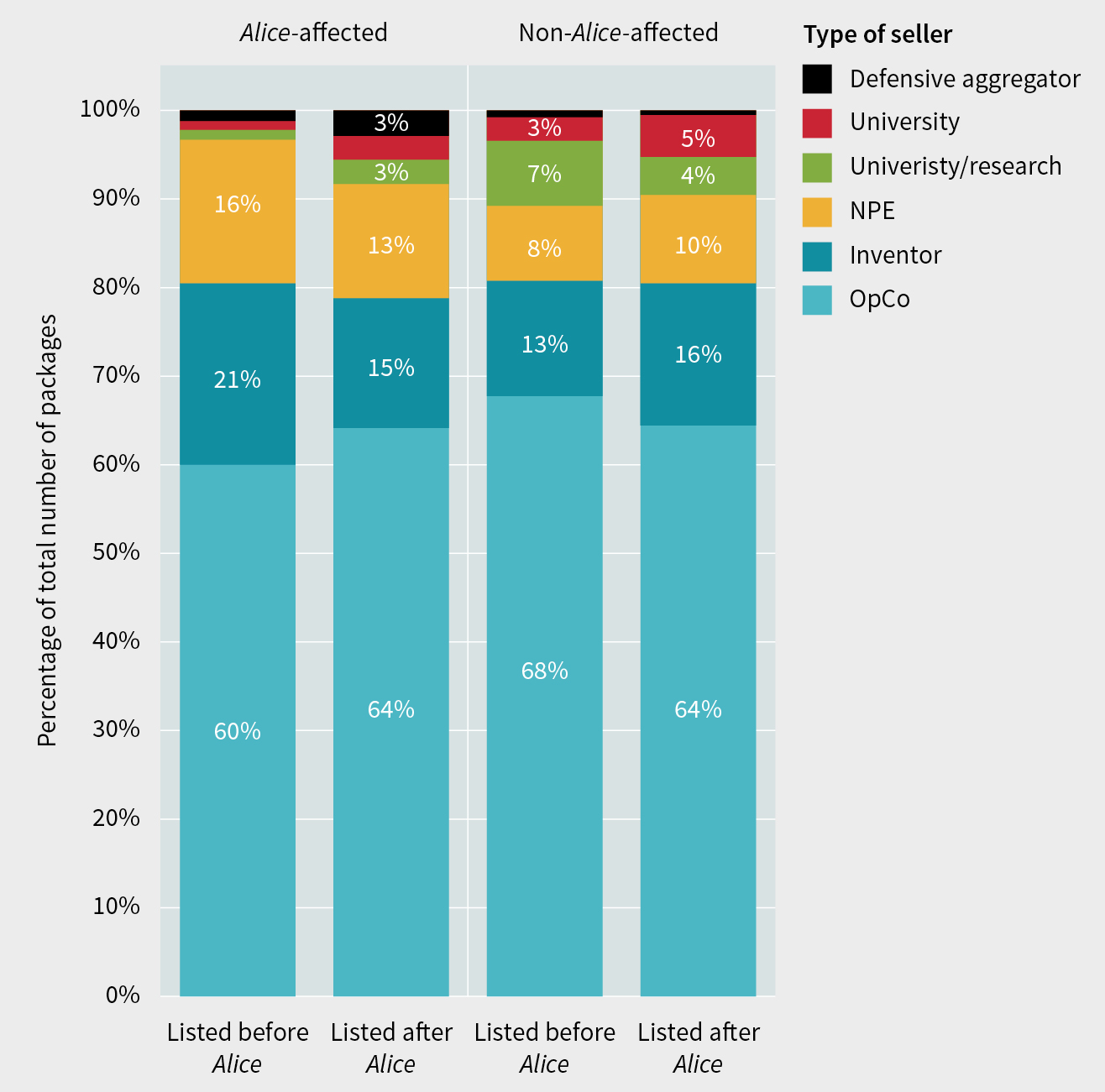 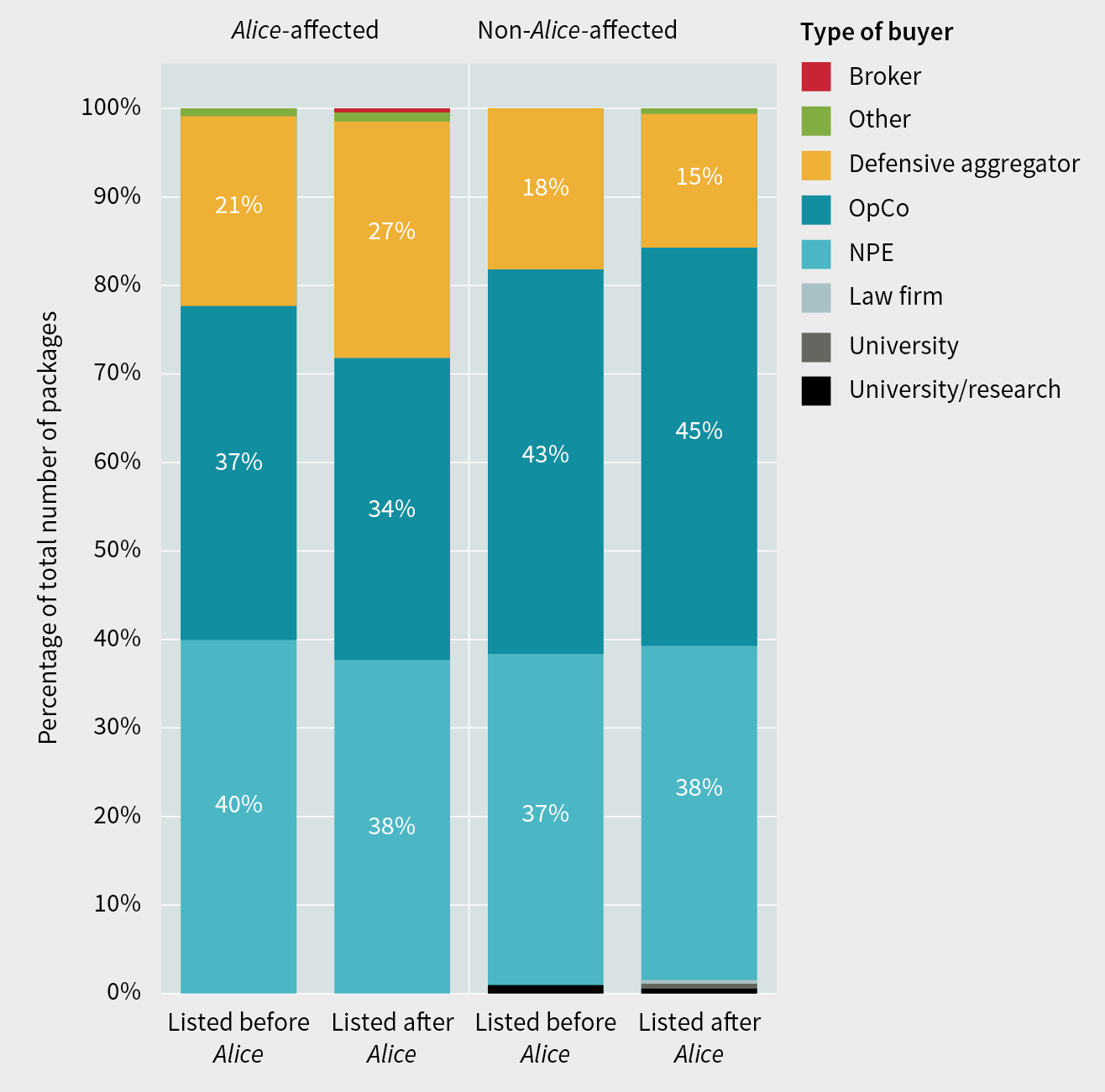 So how big of an impact did Alice have on the patent market? It appears not very much. At the time of the decision, it was disruptive; people thought that it heralded the end of business process and software patents, and the beginning of an entirely new patent landscape.

While the decision was disruptive to the industry, no long-term effects appear in our data. One possible reason for this is the fact that our peers in the patent field are incredibly adaptive and smart. They are adept at tackling and solving difficult new problems – including the initial conundrum presented by the Supreme Court in Alice – and seem to have adapted accordingly.

That said, we do not want to downplay the disruptive damage that Alice caused to the industry and the amount of money that companies have expended in order to address Alice-related issues. Nonetheless, Alice is now a well-understood problem and the methods for avoiding those issues are equally understood.

There are some important caveats to this analysis. First, brokers are incredibly responsive to market conditions. Our data did not reveal whether brokers were more selective post-Alice (we believe that they were) or whether they spent more time vetting Alice-affected assets before bringing them to the market (we believe that they did). In some respects, it may be that brokers adapted quickly enough to prevent the most severely Alice-affected packages from coming to the market.

This analysis is only the tip of the iceberg when it comes to analysing the impact of Alice on the patent market. Future research directions could include analysing litigation outcomes and inter partes review rates or the effects of pricing according to the size of the patent package.

The US Supreme Court’s Alice decision has reshaped the law around what is eligible for patent protection, but despite concern that it would signal the end for some types of patent, its impact on the secondary market has been relatively muted.