In the past few years, e-vehicle sales have greatly risen. While the global market share is still small (2.4%), forecasts predict that sales will grow by around 40% in 2019. The automotive industry seems to agree that e-mobility is the future. For example, Volkswagen has announced that it plans to stop developing new combustion engine cars by 2026.

The question seems to no longer be whether e-mobility will take over but rather, how will it do so? There are two major approaches when it comes to how to power the engine of an electric car – large batteries that charge with electricity from the grid or small batteries that are constantly charged by fuel cells. Most companies do not place a great deal of confidence in fuel cells. Elon Musk, the chief executive officer of Tesla and most popular advocate of e-mobility, has even said that fuel cells are a “load of rubbish” and that their “success is simply not possible”. On the other hand, Toyota and General Motors both have enough faith in fuel cells to be developing both types of battery.

The fuel cell is not a modern technology. It first appeared in a letter published in the December 1838 edition of The London and Edinburgh Philosophical Magazine and Journal of Science, where Welsh physicist and barrister William Grove wrote about the development of his first crude fuel cells. Modern fuel cells (for the most part) use hydrogen and oxygen to create electricity through electrochemical processes. The chemical reaction that creates energy is the same as burning hydrogen with oxygen to create H20 (water). While burning is a highly inefficient way to create electricity, the electrochemical method used in fuel cells is almost 100% efficient. This makes it a promising technology for a fossil fuel-free future. Fuel cells are much lighter than the large batteries that are used right now and filling up the tank is much quicker than charging an empty battery. In addition, since the air that is needed for the reaction needs to be clean, hydrogen fuel cell cars literally clean the air while driving. The question remains – can this 181 year-old technology spark innovation? Further, is this reflected in the patent landscape?

In order to identify fuel-cell-related patents, the IPlytics Platform database was used to perform an extensive keyword search of worldwide filed patents in the field of fuel-cell technologies. The search was based on the patent’s content, making use of state-of-the-art stemming and semantic indexing methods. For this report IPlytics analysed 93,323 patents, which break down to 47,620 patent families (number of unique patents on INPADOC database). Figure 1 illustrates the number of patent applications over yearly counts between 2009 and 2019.

Figure 1 shows a significant drop in patenting in 2015. To identify the companies that have stopped patenting and those that are continuing to file applications for fuel cells, the IPlytics Platform tool was used to analyse yearly patents per company and focused on the 10 companies that have the highest patent filing count in the last 10 years. As Figure 2 shows, Honda, Nissan and Hyundai all submitted fewer patent applications in 2015 than in 2014. Toyota has drastically changed its behaviour, reducing its patenting activity by nearly 50%. While several Asian companies were also reducing their efforts, the US company Ford started to increase patent filing in 2015.
2018 marks the year that Ford patented more than Toyota. Until that year, Toyota had been the main driving force for fuel-cell technology for electronic vehicles since 2004. The following years will show if Toyota has turned its back on this technology for good or if it keeps developing it parallel to other to conventional electronic vehicles. Other Japanese companies, such as Honda and Nissan, have also decreased their patenting activities. In comparison with this is US General Motors and Korean company Kia, which have increased their filings. 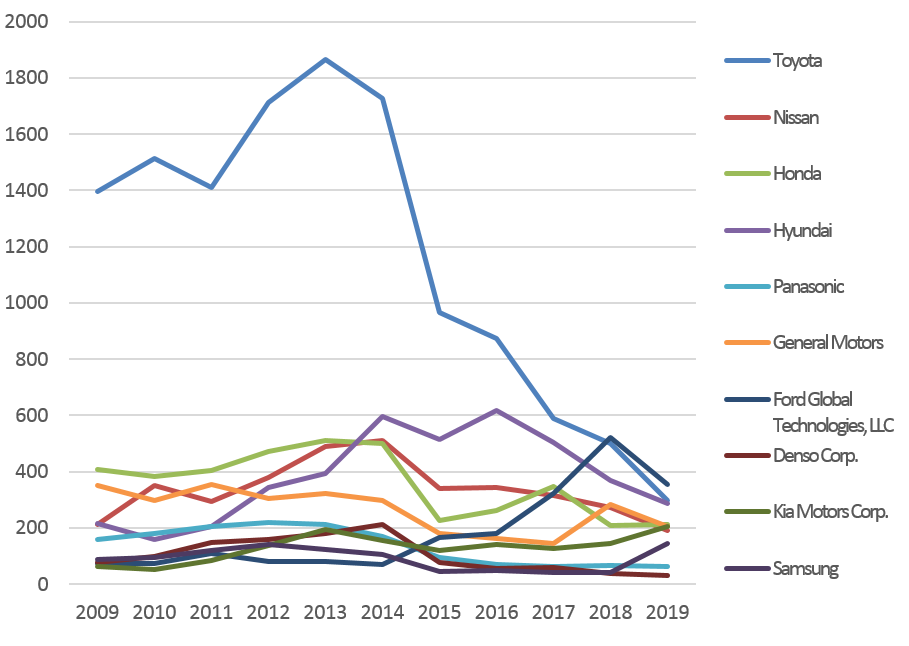 In order to identify patent ownership, IPlytics aggregates patents as to the patent portfolio of each company, making use of entity disambiguation techniques. Further, the patent applications are counted as to the corresponding patent family in order to count the number of unique patented inventions per company. Figure 2 shows that the Japanese companies Toyota, Honda and Nissan are the three strongest fuel-cell related patent owners measured by patent family size. Five companies in the top 10 are Japanese, three are from South Korea and two are from the United States, which shows a very strong Asian dominance. 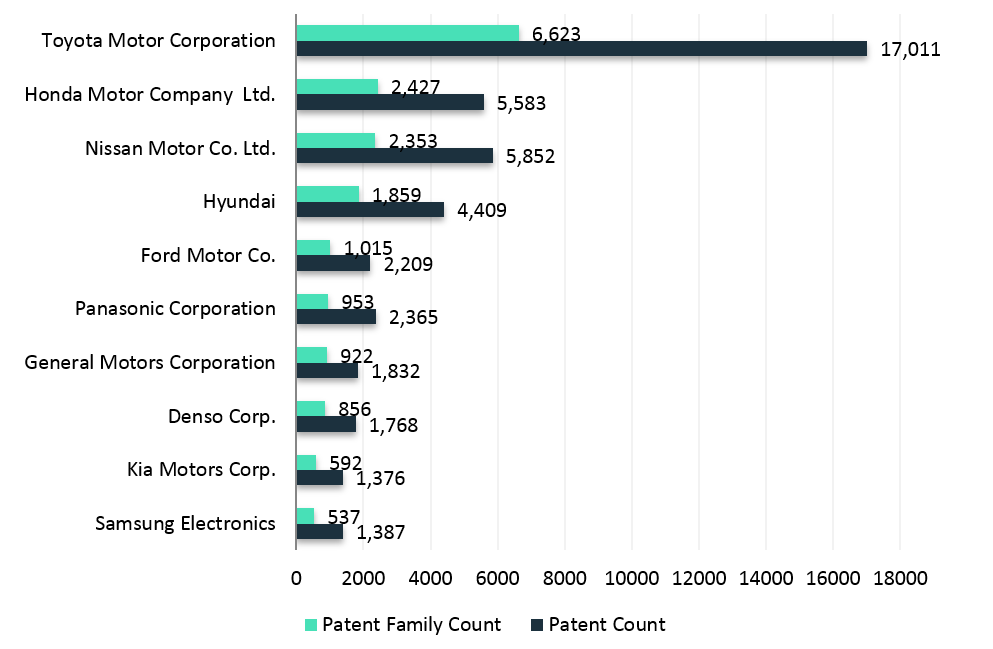 IPlytics counted fuel cell-related patents as to the office’s country in order to identify at which patent office the patents had been filed. As illustrated in Figure 3, most fuel-cell patents have been filed in the United States, followed by Japan and Germany.

Figure 4: Patent applications as to country of first filing 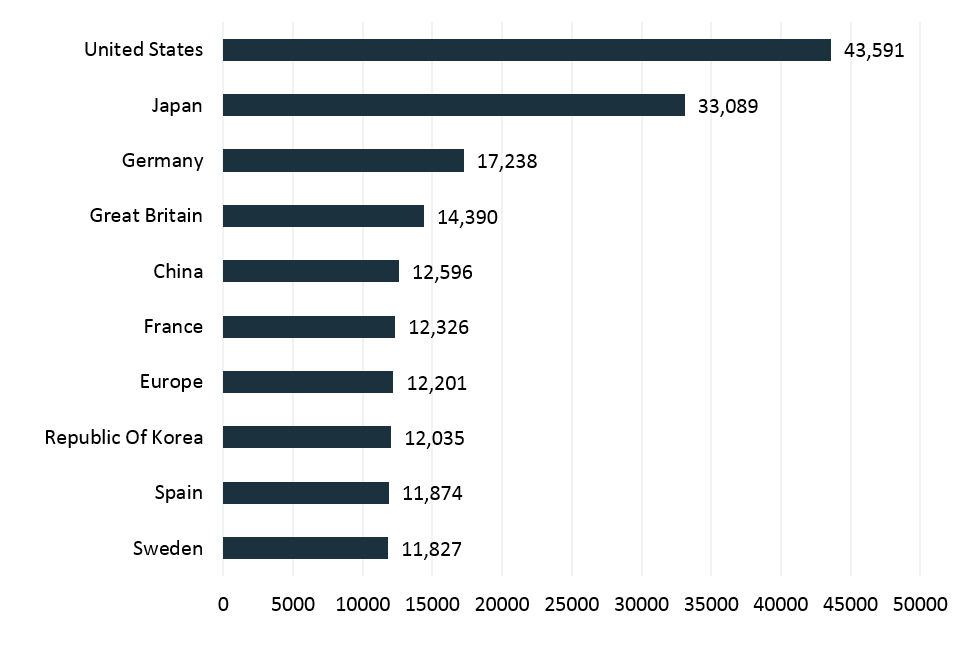 The market coverage (MC) indicator estimates the patent family size by counting each country of a patent family divided by the country’s gross domestic product. The count is normalised and compared to industry averages (using international patent classification (IPC) or cooperative patent classification (CPC), year and country). A high MC value reflects a global internationalisation strategy and a wide legal market protection. Further, a high MC value reflects a high perceived patent value for the applicant. Patent applications and maintenance fees create considerable costs at each patent office. The more countries in which a patent has been filed, the higher the perceived international market potential for the patented invention.

The technical relevance (TR) indicator is calculated by counting the number of prior art citations that a patent receives (forward citations). Citations are counted as citing families. Self-citations as well as subsidiary citations are not counted. Finally, counts are normalised by year, country of jurisdiction and main IPC/CPC. A high TR value reflects a high technical relevance of a patent, as subsequent patents have to cite the patent as prior art. Patent citations are reviewed and verified by objective and qualified patent examiners. A high TR value thus identifies leading technologies of a particular market segment.

Table 1 shows that only the Ford fuel-cell patent portfolios of the top 10 patent owners have a slightly high technical relevance (a score higher than one is above average). On the other hand, all portfolios have a market coverage higher than the average, which indicates that the owners consider their patents highly enough to protect them internationally.

The patent analysis shows that there is a shift towards developing fuel-cell technologies, as Ford and General Motors have started investing in their development, while Toyota (ie, the technology leader) has drastically decreased its patent filing activities. Senior patent managers and patent directors involved in automobile industry should consider the following: