The patent litigation environment in India

Stimulate a dynamic, vibrant and balanced intellectual property rights system in India to:

• foster creativity and innovation and thereby, promote entrepreneurship and enhance socio-economic and cultural development; and

• focus on enhancing access to healthcare, food security and environmental protection, among other sectors of vital social, economic and technological importance.

Through the recently announced National IP Rights Policy, the government has ushered in the new “Creative India; Innovative India” regime. The policy recognises that India has a well-established legislative, administrative and judicial framework, compliant with the Agreement on Trade-Related Aspects of IP Rights (TRIPs), to safeguard and enforce IP rights. The launch of the Start-Up India movement provided the necessary impetus to protect innovation.

India’s commitment to fully implement TRIPs required three sets of amendment to the Patents Act 1970. While, in general, developing countries could make their patent laws TRIPs compliant through an amendment to be introduced by January 1 2000, countries such as India – which had a process patent regime for, among other things, pharmaceuticals and agrochemicals– enjoyed a longer transition period before introducing product patents in all fields of technology (ie, a deadline of January 1 2005 for pharmaceuticals and agrochemicals). However, in the meantime, India was required to provide a means by which product patent applications for pharmaceuticals and agrochemicals could be filed from January 1 1995 (known as the ‘mailbox’ or ‘black box’). If a product covered by this type of application was granted a patent in a World Trade Organisation (WTO) member country and had obtained marketing approval in a WTO member country, the owner enjoyed exclusive marketing rights for five years before the patent was granted or rejected in India.

New provisions relating to mailbox or black box and exclusive marketing rights were incorporated into the Patents Act 1970 by the Patents (Amendment) Act 1999 with retrospective effect from January 1 1995. The first exclusive marketing right was granted to Novartis Pharma AG, a foreign-based company, for its Glivec product, as the application related to public health. The Indian Drug Manufacturers’ Association commented: “This is a vital life saving drug for treatment of blood cancer. Its availability at fair price and adequate quantities is a matter of life and death for many victims of this deadly disease.” Subsequently, Novartis filed suits for infringement of its exclusive marketing right against several Indian companies which had launched generic versions of Glivec.

The year 2005 was also significant for Indian patent law, as it saw the challenging final phase of amendments to patent law to ensure TRIPs compliance. The hotly debated product patents system for pharmaceuticals and agrochemicals and the Section 3(d) amendments relating to evergreening and incremental innovation finally took effect when the Patents (Amendment) Act 2005 came into force on January 1 2005.

Since 2005 the Indian courts have witnessed a sudden spurt of patent litigation, which was an obvious consequence of putting a product patents regime for pharmaceuticals and agrochemicals in place. The patent litigations originating from India have drawn global attention.

In Bayer Corporation v Union of India the high court observed: “It is well settled that courts do not fill gaps in public policy spaces. It is also a matter of concern that such patent linkage would have the following undesirable results:

(2) It transforms patent rights which are private property rights, that depend on the owners’ promptitude and desire to enforce them, into public rights, whose enforcement is dependent on statutory authorities, who are publicly funded.”

In Bajaj Auto Limited v TVS Motor Company Limited the Supreme Court observed: “Recently, we have held in Special Leave Petition(C) No.21594 of 2009 decided on 07th September, 2009 in the case of M/s. Shree Vardhman Rice & Gen Mills vs. M/s Amar Singh Chawalwala as follows: ‘Without going into the merits of the controversy, we are of the opinion that the matters relating to trademarks, copyrights and patents should be finally decided very expeditiously by the Trial Court instead of merely granting or refusing to grant injunction. Experience shows that in the matters of trademarks, copyrights and patents, litigation is mainly fought between the parties about the temporary injunction and that goes on for years and years and the result is that the suit is hardly decided finally. This is not proper.’”

In F Hoffman La-Roche Ltd v Cipla Ltd the high court observed: “This Court is of the opinion that as between the two competing public interests, that is, the public interest in granting an injunction to affirm a patent during the pendency of an infringement action, as opposed to the public interest in access for the people to a life saving drug, the balance has to be tilted in favour of the latter. The damage or injury that would occur to the plaintiff in such case is capable of assessment in monetary terms. However, the injury to the public which would be deprived of the defendant’s product, which may lead to shortening of lives of several unknown persons, who are not parties to the suit, and which damage cannot be restituted in monetary terms, is not only uncompensatable, it is irreparable. Thus, irreparable injury would be caused if the injunction sought for is granted.”

In Wobben v Mehra the Supreme Court observed: “Based on the two remedies contemplated under Section 64 of the Patents Act, the fifth contention of the learned counsel for the appellants was, that the use of the word ‘or’ in Section 64(1) demonstrates, that the liberty granted to any person interested to file a ‘revocation petition’, to challenge the grant of a patent to an individual, cannot be adopted simultaneously by the same person, i.e., firstly, by filing a ‘revocation petition’, and at the same time, by filing a ‘counter-claim’ in a suit for infringement… We do not have the slightest hesitation in accepting the above contention (fifth in the series of contentions), that even though more than one remedies are available to the respondents in Section 64 of the Patents Act, the word ‘or’ used therein separating the different remedies provided therein, would disentitle them, to avail of both the remedies, for the same purpose, simultaneously. On principle also, this would be the correct legal position.”

In Bayer Corporation v Union of India the high court observed:“Therefore, as rightly held by the Tribunal, it would need to be decided on case to case basis. It would, therefore, follow that when a patent holder is faced with an application for Compulsory License, it is for the patent holder to show that the patented invention/drug is worked in the territory of India by manufacture or otherwise. Manufacture in all cases may not be necessary to establish working in India as held by the Tribunal. However, the patent holder would nevertheless have to satisfy the authorities under the Act as to why the patented invention was not being manufactured in India keeping in view Section 83 of the Act… In the circumstances, the contention of Union of India that ‘worked in India’ must in all cases mean only manufactured in India is not acceptable.”

In Telefonaktiebolaget LM Ericsson (Publ) v Mercury Electronics the high court observed that: “The Defendants shall pending trial of the suit, pay the following rates of royalty directly to the Plaintiff for sales made in India from the date of filing of suit… It is made clear that the above order is purely an interim arrangement and is not a determination of the FRAND [fair, reasonable and non-discriminatory] rates for the Ericsson portfolio. The defendant shall not rely upon the above rates before the competition authorities or any other forums as it is not final in nature.” 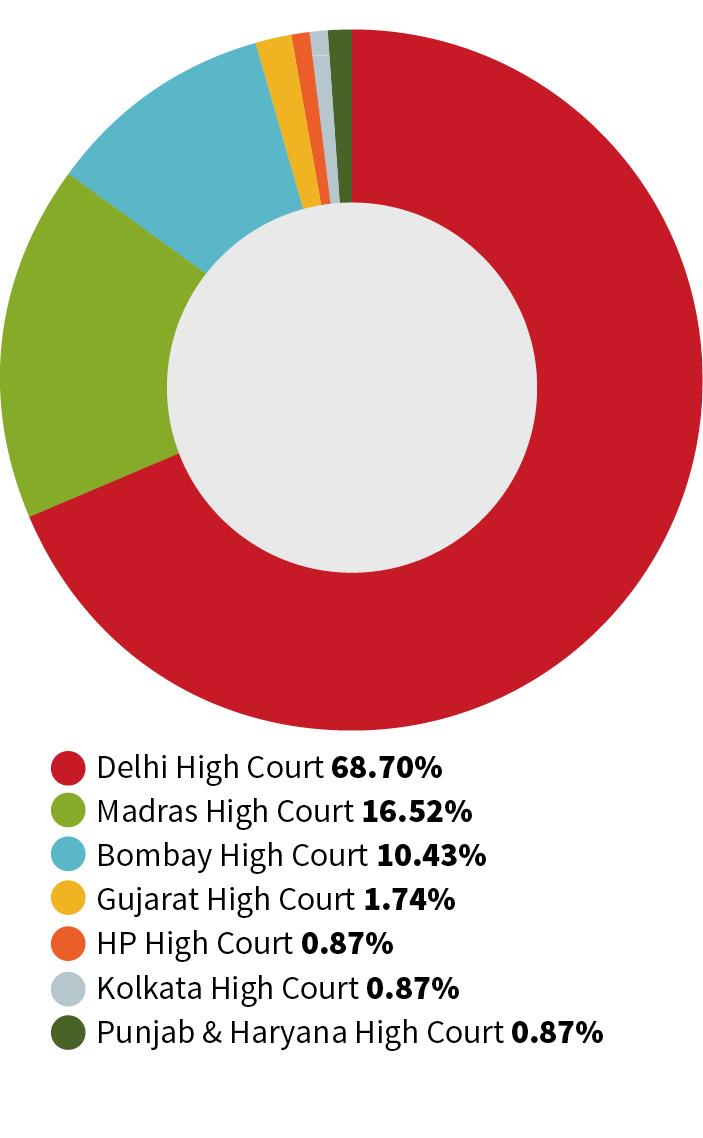 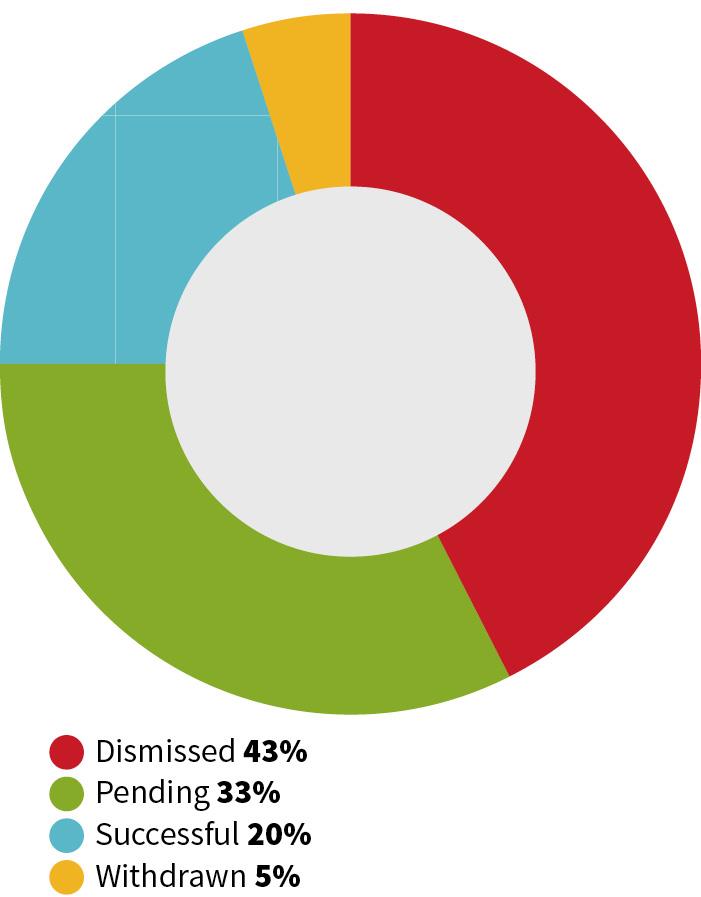 However, at IP Appellate Board (IPAB) level, quite a few revocation applications failed to see the light of the day as they were withdrawn before being heard by the IPAB (Figure 2). This trend only indicates some kind of settlement between the parties.

In an interesting turn of events, the Indian Pharmaceutical Alliance and Natco Pharma Limited withdrew their pre-grant oppositions against the patent application for Gilead’s Hepatitis C drug sofosbuvir, marketed as Sovaldi, after the latter entered into voluntary licensing agreements with 11 companies to sell the generic version at a lower price. While previously the interests of patient groups and generic companies appeared to overlap, with companies entering into this type of licensing agreement, the baton for raising public health issues has passed solely to non-governmental organisations (NGOs). Reacting to this trend, Tracy Swan, Hepatitis/HIV project director at Treatment Action Group, New York City, stated: “It is important to recognize that Gilead’s licenses are a wolf dressed as a lamb. They will hinder access for millions of people in desperate need of HCV treatment, and harm the entire generic industry.”

The rejection at the prima facie stage of compulsory licence applications for patents owned by Pharmaceuticals International Private Limited and Lee Pharma Limited for the products Dasatinib (Patent 203937) and Saxagliptin (Patent 206543), respectively, gave a clear message to Indian generic companies that obtaining compulsory licences would not be easy.

In recent years there has been a patent litigation shift from the field of pharmaceuticals to the fields of electronics and information and communications technology (Figure 3). The data suggests that there is a higher likelihood of patent litigation in these fields, particularly involving FRAND issues.

Indian courts and the Competition Commission of India – the Indian antitrust authority – have recently begun ruling on FRAND issues. As an interim measure, the Delhi High Court has used the value of the downstream product as a royalty base and has relied on comparable licences to determine FRAND royalties. This is consistent with sound economic principles and industry trends in the rest of the world.

The sudden rush of cases on FRAND issues has led the Department of Industrial Policy and Promotion (DIPP) to publish a discussion paper on standard-essential patents and their availability on FRAND terms, in order to solicit public opinion on a suitable policy framework. 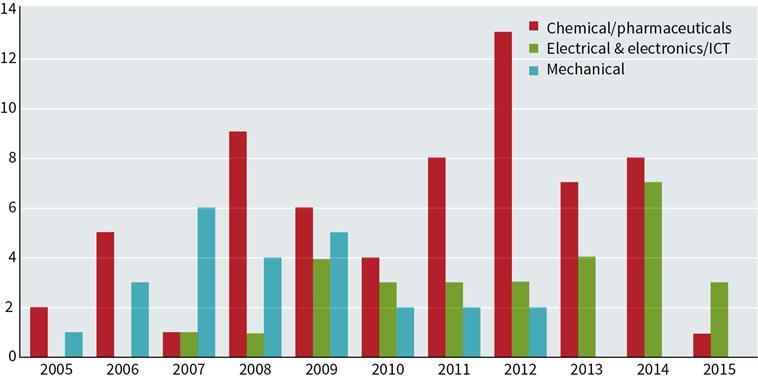 What to expect next

In light of the present situation, the following developments can be anticipated:

The National IP Rights Policy demonstrates how serious the Indian government is about creating a vibrant and fully functional patent system. However, it remains to be seen whether the spirit of the objectives envisaged by the policy is implemented. 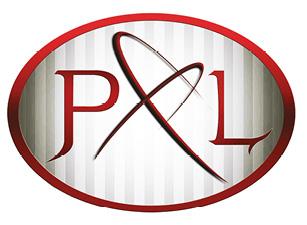 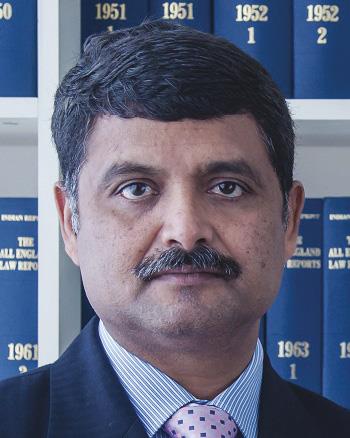 Sanjay Kumar predominantly practises patent law. Before establishing the firm, he worked with other leading law firms in India. He has more than 23 years’ experience as a lawyer at the Bar and is also a patent agent.

Dr Kumar has represented a number of leading multinational and Fortune 500 corporations before the Intellectual Property Appellate Board, the Patents and Designs Office, Customs, the high courts and the Supreme Court, and has successfully handled numerous IP matters, including patent and design matters, in India. 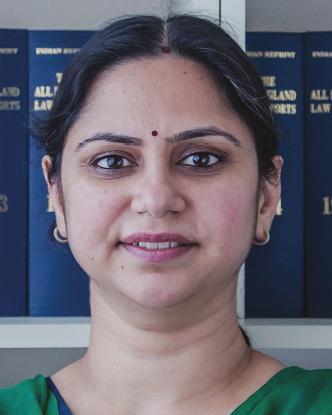 Arpita Sawhney is an IP attorney and previously worked with other leading law firms in India. She has more than 15 years’ experience as a lawyer at the Bar.