It has never been harder to be an NPE in the United States, so it’s no surprise that at the NPE 2015 conference in New York, opportunities further afield were a major subject of discussion

On March 12 IAM hosted NPE 2015 – The Business of Responsible Licensing, a conference that took place at the Convene Centre in New York’s Financial District. Close to 200 delegates attended the event, including many senior decision makers at public and private non-practising entities (NPEs), inventors, investors, DC lobbyists, analysts and lawyers. They discussed a range of issues, but honed in on the developing landscape for NPEs in the United States, the opportunities that are emerging in new jurisdictions and developing business models. All in all, it was a very illuminating day.

Unsurprisingly, patent reform was a major topic of conversation. If there was one rallying cry from the event, it was that those in the audience, as well as the NPE and licensing communities in general, should be more actively engaged in the legislative process that is now underway in Washington DC.

Both Russ Merberth, chief policy counsel at Intellectual Ventures, and former American Intellectual Property Law Association executive director Todd Dickinson urged delegates to put their arguments against fundamental change to members of Congress and their staffers. “In DC you’re not visible and you’re up against a behemoth,” warned Dickinson, who recently joined law firm Novak Druce Connolly Bove & Quigg. “You need to have your war stories in hand,” he continued. “Licensing is under attack and industry needs to be more visible and voluble,” added Merbeth.

Some senior NPE executives present had taken the time to go to the US capital to make the case against sweeping reform; it proved to be a sobering experience. Perhaps most telling is the realisation when you get there that, for the vast majority of legislators and their staffers, patent law is not a priority. Instead, they take their cues – and their voting instructions – from briefing papers sent round by party leaders. To get a hearing and to be taken seriously is time-consuming and often frustrating work. But it pays to stick at it.

Both Phil Hartstein, CEO of Finjan, and Conversant chief IP officer Scott Burt reported that people are finally beginning to listen. “When we started going to the Hill two and a half years ago, for many of those we spoke with it was the first time they had ever met someone from a patent licensing entity. We were like unicorns,” Burt joked. “What we have come to understand,” he continued, “is that most people in DC are well intentioned and work extremely hard, but they just do not have the time to research issues deeply. What they hear is what people tell them; so if you don’t go to make your case, they will never hear it.”

The message from those who support a more targeted package of revisions is getting through, to some degree – the STRONG Patents Act, recently introduced in the Senate, was supported by most, if not all, of the panellists throughout the day. But Merberth pointed out that it is a sign of the climate on Capitol Hill that the introduction of that legislation is regarded as an act requiring significant political courage in the face of the powerful and well-funded pro-reform contingent.

Talking to a few people during the breaks, there seems to be a growing sense that while the Goodlatte Act will make it out of the House of Representatives, there will have to be a degree of compromise between pro and anti-reformers before anything emerges from the Senate. It will then be a matter of reconciling what could be very different bills. So while it would be a major surprise if further patent reform legislation were not placed in front of President Obama to sign some time before his presidency comes to an end in January 2017, the form it will actually take is still very much up in the air. Confidence in the anti camp is growing that the pro side will not get things all its own way. But up against such a deep-pocketed opponent, no one can take anything for granted; it will be a battle all the way to the wire. 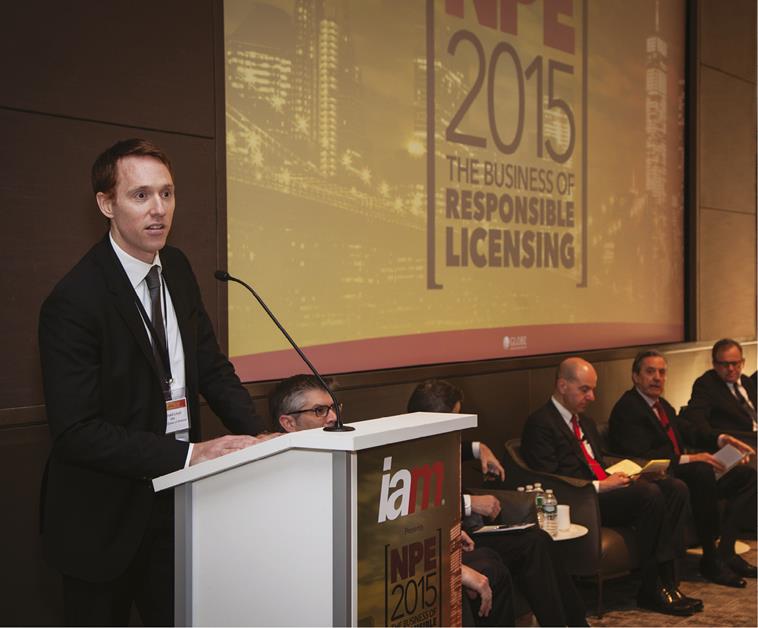 The courts weigh in

Of course, it is not just legislative patent reform that is having an effect on NPE business models in the United States. Court decisions are also a major issue – and none more so than last June’s Supreme Court ruling in Alice Corporation v CLS Bank. For many, that case was just the latest example of the confusion in the jurisprudence over patent-eligible subject matter under Section 101 of the US patent statute. 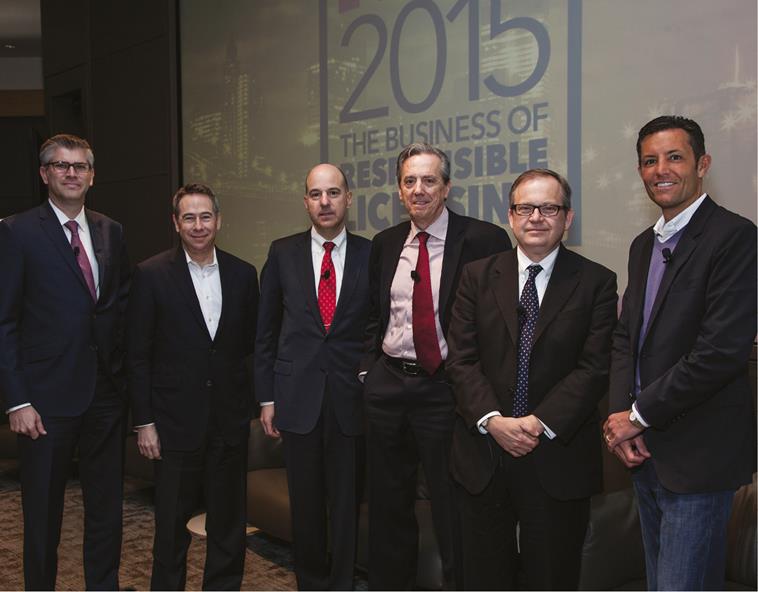 Professor Adam Mossoff of George Mason University described Alice as “the nadir of the Supreme Court’s engagement on patent-eligible subject matter”, adding that the decision is “having an incredibly destructive impact on creative industries”. Ashley Keller of litigation funder Gerchen Keller Capital condemned it as “a huge problem”, pointing out that “a lot of the decisions that are defining things as abstract are not intuitive”.

As an example, Keller cited a case involving a patent relating to an online bingo game which was ruled invalid under Section 101. “I don’t think bingo is an abstract idea – it might have been obvious under Section 103 but I don’t think it’s abstract,” he pointed out. The overall confusion, he warned, has made patents extremely difficult to value and has made capital, offered by the likes of Gerchen Keller, more costly.

It would be fair to say that in many of the panels and among delegates generally, there was a level of cynicism about the direction both the Supreme Court and, latterly, the Court of Appeals for the Federal Circuit (CAFC) have been taking with regard to patent owners, NPEs especially.

For example, a widely expressed view seemed to be that there is little chance of the recent $530 million damages award made by a Texas jury against Apple in a case brought by NPE Smartflash Technologies being allowed to stand by the CAFC. Keller insisted that the reason why boils down to a fairly simple reading of recent precedent and has little to do with the merits of the case. “The reason the Smartflash award won’t stand is because of the headline number and the fact that it’s coming out of the Eastern District of Texas,” he said wryly. 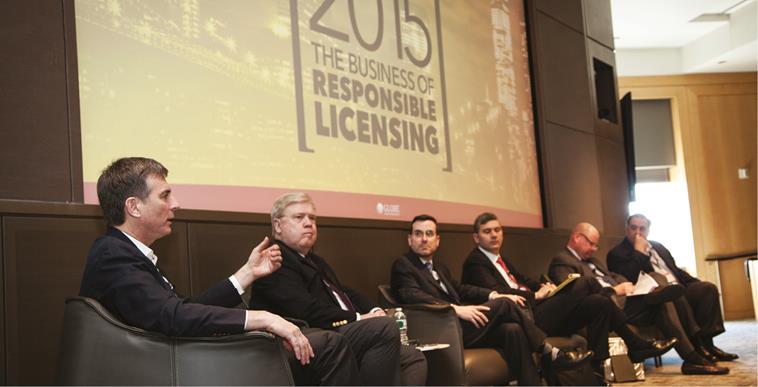 Given the way that the US environment is developing, it was no surprise that a number of speakers mentioned assertion options in other jurisdictions. Germany is clearly a leading choice. As a large, prosperous market, with courts that are efficient, relatively cheap and happy to grant injunctions, that makes sense. Now that enforcement in the United States has become more difficult, the search is on for other venues – and when you are looking for global licensing settlements, the ability to lock someone out of a G8 economy some 80 million strong can be all that is needed to get a deal done.

Deirdre Leane, CEO of IPNav, said that the firm always looks to Germany first now and declared herself a big fan of the country’s patent litigation system, as well as its specialist judges; while plaintiffs lawyers Bob Cote of McKool Smith and Mike Renaud of Mintz Levin also stressed Germany’s importance for their clients.

According to one European market player, speaking at the post-event drinks reception, the result of this push across the Atlantic is that while US patent prices may be falling, in Europe they are starting to edge up. And as the prospect of a Unified Patent Court (UPC), based mainly on the German system, gets ever closer, that trend can be expected to continue.

Alongside this, a group of big US tech companies is already making concerted moves to seek the restriction of injunctions under the UPC system, with the bosses of some European small and medium-sized enterprises (SMEs) prominent in this campaign. One problem that US big-tech faces, however, is that patent litigation in Europe is relatively cheap; while in countries such as Germany the SME sector likes the fact that injunctions are widely available, as it gives smaller companies teeth in battles with the big boys. Trying to change this perspective will be a challenge, as there are no active trolls asserting poor-quality patents around which a narrative for change can be built.

But notwithstanding Germany’s growing attractiveness as the position for plaintiffs worsens in the United States, the internationalisation of the patent market is inevitable. As Acacia’s CEO Matt Vella stated: “It’s a big world out there, with billions of people buying smartphones.” And what goes for smartphones goes for many other kinds of technology too.

Living standards, disposable incomes and consumer markets are growing around the world, and so too are opportunities. Countries mentioned in dispatches, alongside Western Europe, Japan and the United States, were Indonesia, India, Turkey, Brazil and, of course, China. If that country gets its damages regime right, noted Yann Dietrich of France Brevets, it could become very interesting.

Some things, however, look likely to stay the same. In terms of dollars and patent numbers, said Vella, the tipping point has already been reached in Asia; but in terms of where technology is originating from, the West still leads the way. 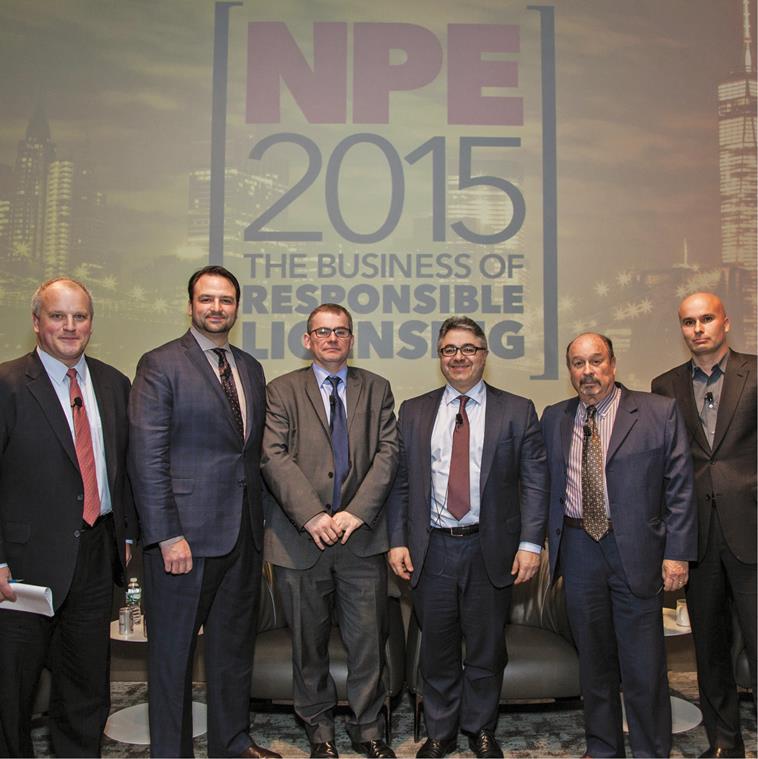 One positive to have emerged from the reconfiguration of the US patent market is that there is now a laser focus on building NPE business models around quality assets. If you are a serious NPE, aiming to develop long-term revenue streams, there is no way that you are going to bother with marginal or junk patents. No one will finance you; no one will negotiate with you; and no court will find in your favour. Want to know the best way to distinguish a troll from an NPE? Try looking at the portfolios they hold and the time and money that have been spent assembling them.

Although observers have predicted that consolidation will come to the patent licensing industry as market dynamics increase the rationale for larger, better-funded NPEs, so far there have been few examples of proposed deals in the sector. Earlier this year Spherix announced that it had rejected an offer from Marathon Patent Group; but a serious deal is yet to emerge. According to Vella, this is because the uncertainty that continues to dog the sector makes assets hard to value on both sides of a deal. “We’re not seeing consolidation so far because there’s too much vibration going on at the edges and people are not sure where it’s going to end up,” he observed. Vella acknowledged that could change if there was one company rich enough to afford to make a mistake.

The problem of valuation as a major block to consolidation was a point that was picked up by Ron Laurie of Syndicated Patent Acquisitions. “People’s inability to put a price tag on a portfolio is due to an inherent uncertainty in patent valuation,” he claimed. “Far fewer deals get done when a person in either company is afraid they’re going to lose their job because of a bad valuation.”

Joff Wild is editor of IAM; Richard Lloyd is its North America editor