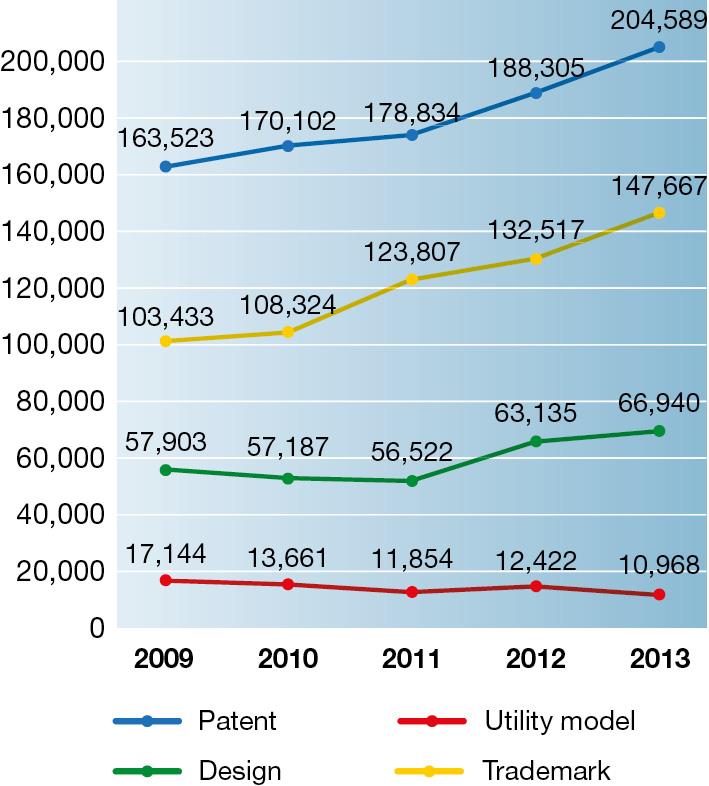 In 1949 only 200 patent applications were filed in Korea; this figure rose to 5,000 in 1980 and to 100,000 in 2000. However, in the past 13 years it has doubled to over 200,000. The rise has been driven mainly by rapid economic growth, together with the technological innovation that has taken place in Korea during this period. According to the World Intellectual Property Organisation, Korea ranked first for six consecutive years (from 2007 to 2012) with respect to the number of resident patent applications filed per gross domestic product and capita.

*Figures for 2013 are preliminary. Figures in parentheses include multiple applications.

Table 3 lists the top six technology fields of patent and utility model applications filed in 2013. With regard to patents, the listed fields comprise 55.9% of all technological fields. Foreign applicants tend to focus more on chemical fields than domestic applicants.

According to KIPO’s overview of IP examination trends, registration rates are also gradually rising. With regard to patent applications, the registration rate was 60.4% in 2009, increasing to 67.2% in 2012. Figure 2 shows registration figures by type of IP right. 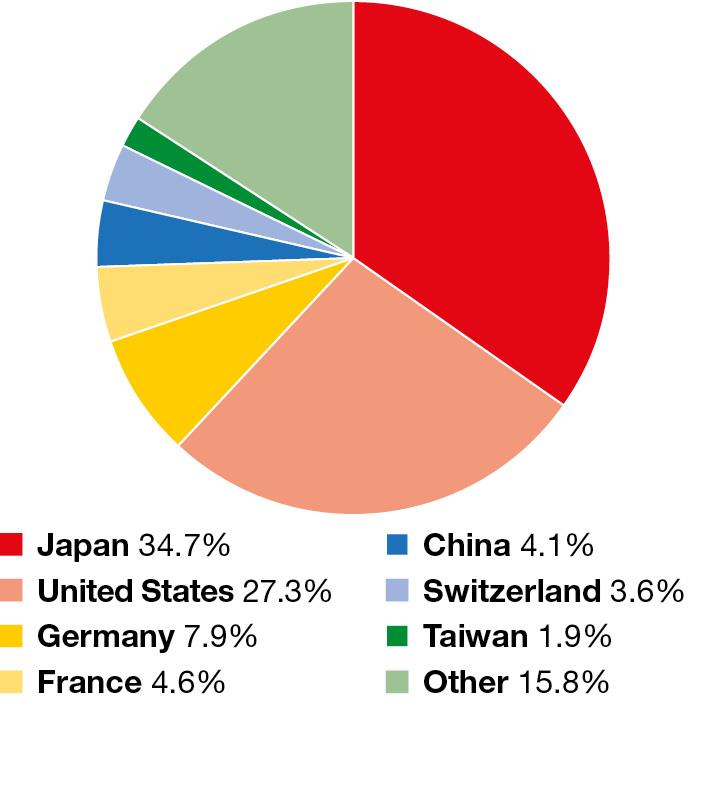 KIPO sets targets for the pendency of each IP right at the start of each year and applies various methods to reach those targets. Based on KIPO’s statistics overview of IP examination trends and 2013 Annual Report, the average first action pendency for 2013 was 13.2 months for patents and utility models, with shorter periods for trademarks (7.7 months) and designs (7.4 months). Compared to the 2012 figures, pendency was reduced by 1.6 months for patents and utility models, 1.2 months for trademarks and 1.4 months for designs.

KIPO is renowned for providing the fastest examination of IP rights applications in the world and has maintained its lead by continuing to reduce pendency periods.

KIPO has announced that its decision to outsource prior art searches played a significant role in the overall reduction of its examination pendency. Further, to reduce first action and examination pendency, KIPO is continually employing more examiners. As of 2013 KIPO’s examination personnel totalled 732 for patents and utility models and 160 for trademarks and designs.

*Figures for 2013 are preliminary, with renewals of trademark registrations excluded.

From 2009 to 2013, the success rate of rights holders in infringement suits before Korean district courts involving patents or utility models was 27.6%, with 33% of requests for injunctions being granted. The slightly higher success rate for injunctions may well be due to the fact that the burden of proof required for an injunction is relatively low compared to that in a patent infringement suit. However, the difference between the two has narrowed over the past few years. In one recent example the Suwon District Court was asked to issue an injunction – the court considered the doctrine of equivalents, indirect infringement and invalidity issues to determine whether the patent in question had in fact been infringed. Previously, the courts have not always been so stringent – which goes some way towards explaining why the gap between success rates in infringement litigation and in requests for injunctions continues to narrow. 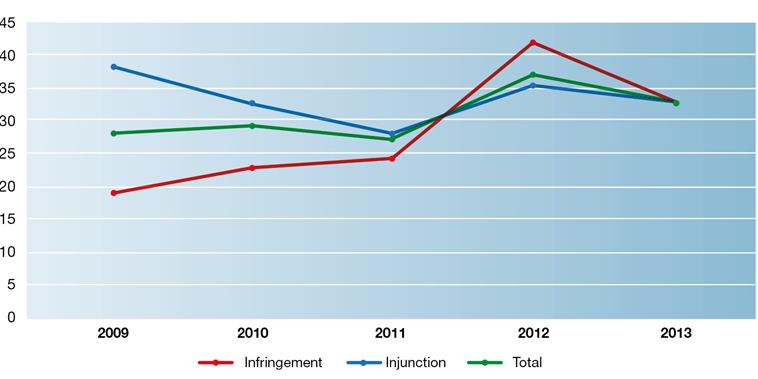 Patentees lost their infringement cases because the patent was found not to have been infringed in 49.8% of cases and because the patent was found to be invalid in 39% of cases; 8.3% cases failed because of freedom to operate issues. In petitions for injunctions, the reasons that the court gave for refusing a patentee an injunction were non-infringement (55.6%) followed by invalidity (28.4%) and freedom to operate (3.2%). Generally, the reasons for a plaintiff losing an infringement case tend to be non-infringement, patent invalidity, freedom to operate and licences. In addition, sometimes the plaintiff was not the legitimate owner of the patent or no damages were inflicted, even though the patents had been infringed. With regard to injunctions, the grounds for refusal include the following:

Table 10. Success rates of patentees being granted injunctions by type of party (2009-2013)

Articles 128(1) to (5) of the Patent Law provide various methods for calculating damages in patent infringement cases.

From 2009 to 2013, damages were most commonly awarded at the judge’s discretion under Article 128(5). Lost profits were the second most common type of damages awarded (28.3%), while a reasonable royalty was rarely awarded.

In order to compare the damages awarded in Korea to those awarded in other countries, such as the United States or Japan, Table 12 lists only lost profits and reasonable royalty.

Amount of damages awarded to plaintiffs

In 2009 a US federal district court ordered Abott Laboratories to pay Centocor Ortho Biotech Inc $1.848 billion in damages; by contrast, the highest damages awarded in Korea between 2009 to 2013 was $13 million, while the highest award made in Japan during the same period was $18 million.

In Korea, there is some movement towards reforming the Patent Law with regard to damages (including statutory, punitive and treble) for IP infringements. However, it will take some considerable time before any such changes are apparent in the decisions of Korea’s courts.

As demonstrated by a number of developments in recent years, South Korea’s attractiveness as a market in which to file, hold and monetise IP assets has been growing (although in some areas, such as damages, IP owners would likely want to see some further improvement). This is true not just for Korean rights holders – which trends suggest have become increasingly sophisticated in terms of IP strategy – but also for foreign entities.