The biggest owners of patents, SEPs and standard contributions for smart energy technology

The demand for electricity, and for energy more broadly, has grown rapidly over the last century, and consequently, so has the price. Therefore, there is a clear imperative for the efficient use of electricity. One solution to overcome the challenge of increasing demand is smart energy technologies, this refers to so-called ‘intelligent technologies’ that improve efficiency in the areas of energy conversion, generation, storage, transmission and consumption. Innovations in this area tend to focus on sustainable and renewable energy sources while driving down costs.

‘Smart energy’ refers to the entire value chain from energy generation to energy consumption. Energy production has historically been associated with power plants, coal, gas, and oil but the picture is shifting to include sustainable alternatives that produce clean renewable energy, (eg, solar panels, wind turbines, biogas, thermal pumps and hydroelectric power). The electricity produced by these new methods must still be transmitted to storage facilities as well as consumers via smart distribution grids.

Energy generation has become decentralised, and now even the smallest producers are integrated. Modern electricity transmission uses intelligent power grids, super grids and smart grids, which react to different energy feed-ins and changes in demand. Through the power grids, electricity reaches the consumer according to demand, and surplus electricity goes to  storage facilities. End consumers are considered to be companies, industrial enterprises, municipalities, or domestic users. Storage methods include pumped storage and compressed air storage, and increasingly battery banks and capacitor banks are used by individual neighbourhoods. The smart energy concept aims to use the batteries and power banks of electric vehicles as buffers to manage short-term fluctuations in demand, with the stored energy then fed back into smart grids via a smart home. In this case, electric vehicles would act as energy storage and energy consumers.

At the domestic consumer scale, smart meters with tariff-dependent switching on and off of household appliances looks set to play an important role in the private sector. Further energy is saved in the smart home through various monitoring and control mechanisms (eg, lighting).

Figure 1: Number of standards contributions, number of patent families as to publication year and number of self-declared SEP families as to year of declaration that describe smart energy technologies over time 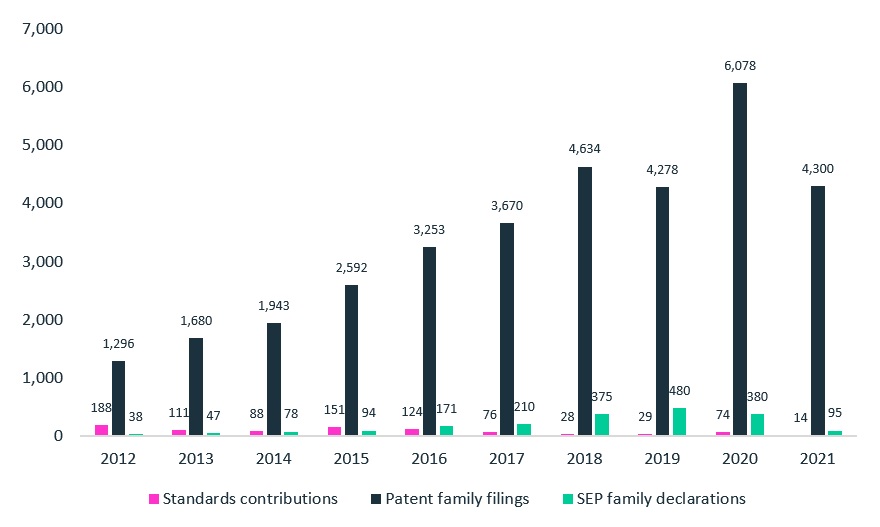 The data shows a strong overall increase in patent filings as well as declarations of potential SEPs from 2012 to 2020. Typically, standards development and therefore the R&D around connectivity standards is the first activity followed by patent filings and the declaration of potential SEPs. Figure 2 shows that standards contributions, as well as SEP declarations, originate mainly from the 3rd Generation Partnership Project (3GPP) and the European Telecommunications Standards Institute (ETSI), the standards organisations responsible for 4G and 5G. But wireless Wi-Fi technologies developed by the Institute of Electrical and Electronics Engineers (IEEE) are also of importance. Most standardisation contributions describing smart energy have been submitted to the 5G connectivity standard, followed by local area network (LAN) standards such as the IEEE 802.11 series (Wi-Fi) or the IEEE 802.24, or the IEEE 802.15 series.

Figure 2: Number of standards contributions over time that describe smart energy technologies as to standards technology 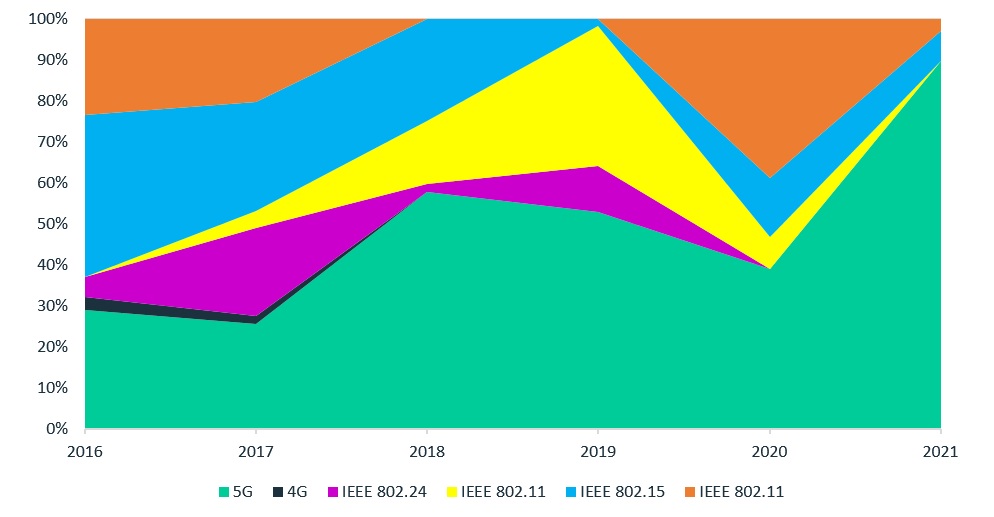 The interplay between the 5G and Wi-Fi standards and smart energy opens up new opportunities and areas of application for energy companies. To understand technology leadership for smart energy technologies, both data on standards contributions as well as patent filings and SEP declarations were counted on the company level. Table 1 shows the top 20 companies most active in patent filing, SEP declaration and standards development. The list of technology leaders shows a selection of companies that do not participate in standards development and thus also do not declare SEPs but are still among the companies with the most smart energy patent filings – including Ming Yang Smart Energy Group (CN), AT&T (US) and State Grid Corp China (CN). These companies are generally active in grid networks related to energy and mobile communications.

Chip, handset and network manufacturers such as Qualcomm (US), LG Electronics (KR), Huawei (CN) and Ericsson (SE), contribute to the development of smart energy related standards and at the same time have large patent portfolios, some of which also include declared SEPs.

The success and adoption of smart energy depends on the technology leaders listed in Table 1, who will develop devices, chips, networks, applications, services, sensors and connectivity standards to realise the first use cases of smart energy. As electricity supply and consumption becomes increasingly expensive, advances in the smart energy sector need to be made. These achievements can not only reduce costs but can also lead to a reduction in CO2 emissions and make a meaningful contribution to combatting climate change.

While many patents have already been published in the field, the picture in standard setting remains mixed. It is not yet fully clear which standard organisations will lead the standardisation of this technology and where smart energy application will be described and standardised. Likely it will depend on the use case where, for example smart meter devices installed at home or in factories will connect to Wi-Fi, while for example electric vehicles will use 5G to exchange smart energy related information.