On 27 March 2019 in VALEO SYSTEMES D’ESSUYAGE v Xiamen Lu Ka Si Car Accessories Ltd the IP Tribunal of the Supreme People’s Court of China maintained a patent infringement judgment handed down by the Shanghai Intellectual Property Court  and held that if a technical feature defines or implies a specific structure (or a step, composition, condition or correlation thereof) of an invention solution, the technical feature is not a functional feature in principle, even though it defines a function (or effect) that it can achieve. The case was selected as one of the IP Tribunal’s guiding cases in 2019 and was chosen as an exemplary case by the Supreme People’s Court on 16 April 2020.

VALEO SYSTEMES D’ESSUYAGE accused Xiamen Lu Ka Si Car Accessories Ltd and Xiamen Fuke Car Accessories Ltd, among others, of infringing its Chinese Invention Patent 200610160549.2 before the first-instance court. The plaintiff requested that the court prioritise its finding on patent infringement and cessation of infringement, leaving other matters, including the calculation of damages, to be adjudicated at a later date.

As shown in Figure 1 below, the subject patent refers to a wiper connector (42) for a motor vehicle intended to pivotally connect a wiper arm (22) with a shell-like component (40) of a wiper blade (24). The connector has a pair of elastic lug-like locking elements (60) with nose-like free ends (62) for locking the arm (see Figure 2). Figure 3 shows that a cap-shaped safety fastener (74) rotatable around an axis (V1) is provided with inner surfaces (77) extending along outer surfaces (59) of the elements (60) of the connector when the fastener is in its close position, thereby preventing the locking elements (60) from outward deforming and locking the connector. 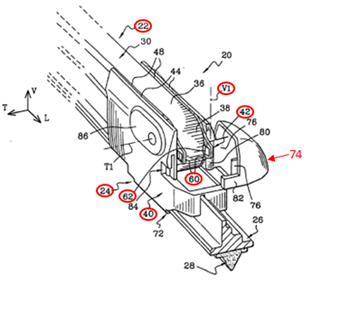 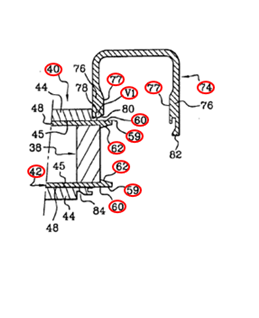 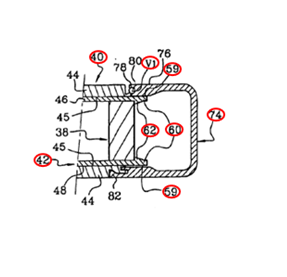 Although neither party objected to the first-instance court finding that the disputed technical feature is a functional feature, the appeal tribunal expatiated on the matter as follows:

The Supreme People’s Court defines ‘functional feature’ in Article 8 of Interpretation II of the Supreme People's Court on Several Issues Concerning the Application of Law in the Trial of Disputes over Infringement of Patent Rights 2016 as follows:

Functional features refer to technical features defined by their functions or effects in the innovation-creation with respect to structures, compositions, steps, conditions, relationships thereof or the like, unless those skilled in the art, only by reading the claim, can directly and clearly determine the specific embodiments that achieve the functions or effects.

In the absence of explicit legislation and judicial interpretation, court practice varies in respect of ascertaining the nature of a technical feature that is a hybrid of both structural and functional limitations. To solve this conundrum, the IP Tribunal set the following parameters:

The IP Tribunal’s new holding is expected to help establish a unified jurisprudence on the ascertaining of functional features in patent infringement lawsuits in China.