Russia erects barriers against counterfeiters along the new Silk Roads

From the second century BC until the 18th century, the Silk Road served as a route for goods between Asia and Europe. Similar paths have emerged in recent decades, covering much of the same expansive territory across Russia and former Soviet Union countries and now providing for the movement of counterfeit goods. As a result of the unstable political and economic situations in some of these regions, monitoring and combating the flow of fake goods along these new Silk Road routes is a significant challenge. Nevertheless, Russia has been developing ways to impede the traffic within its own territory.

Counterfeits usually make their way into the market from different transit points, which comprise certain corridors, shown below. 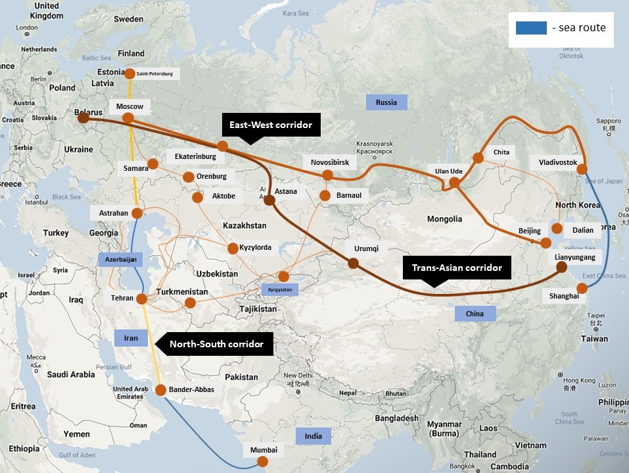 The most popular east-west transport corridor, replicating the Ancient Tea Horse Road (ie, the network of paths through the mountains of Sichuan, Yunnan and Tibet) crosses Russia. It provides access to the railway networks of North Korea, China and Mongolia to the east, and to the Russian ports and the border crossings in the west of Russia, which open a gateway to Europe.

The north-south corridor extends from India to Finland and is designed to carry more than 20 million tonnes per year. It is a multimodal route that transports passengers and cargo from Russia’s second largest city, St Petersburg, to the Mumbai port.

Goods from India, Iran and other Persian Gulf countries are shipped via the Caspian Sea to northern and western Europe as a final destination.

Experts believe that the north-south route enjoys greater advantages than other transport corridors. It is more profitable than routes such as the Suez Canal-Mediterranean Sea-northern Europe route and the Turkmenistan-Kazakhstan-Russia-northern Europe route. According to a preliminary assessment, the capacity of the north-south corridor is six million tonnes of cargo per year with a potential to increase to as much as 20 million tonnes in the near future.

The multipoint transit routes and their new directions create challenges for Russian customs control. Packaging and repackaging, the mixing of legitimate goods with fakes in a single shipment and amendments to customs documents make it difficult to identify the real manufacturer or the true origin of a product. The manufacturer can be located in one country while the product is labelled with a trademark from another.

Thanks to recent amendments to customs legislation, Russian Customs can now create special mobile groups that have the authority to stop and check any vehicles that have entered Russia (even those that have already been checked at the border). Over the last three years, these mobile groups have managed to increase the amount of identified and suspended counterfeits several times over.

International mail and shipping services have become an increasingly popular vehicle for smuggling fake products into Russia. According to information collected by the Russian Post, the country’s oldest and largest mail and delivery service, up to 90% of all international packages and parcels coming into Russia originate from Asia. China, Hong Kong and Singapore using well-known trading platforms. The most frequently seized counterfeit goods from the east include luxury products, watches, perfumes, leather goods, toys and machinery. Some categories of confiscated counterfeits pose significant threats to health and safety, particularly toys, pharmaceuticals and automobile replacement parts.

The proportion of small shipments, delivered mostly by post or via express mail services, continues to grow due to the shrinking costs of delivery and the increasing importance of the Internet and e-commerce. Moreover, small shipments typically sent as post deliveries are difficult to evaluate and detain and the costs of customs checks for smaller shipments are significantly higher. As a result, international mail services have become an additional and serious challenge for enforcement authorities.

A key tool in the fight

Customs recordal remains the key mechanism for protection at the border. This requires that a shipment has a registered trademark in Russia (or a protected trademark via the Madrid system) associated with it and an additional recordal in the Customs IP Register. A customs recordal allows for the automatic identification of the trademark owner, recording contacts, the licensee (or authorised distributor) in Russia and a description of the distinctive characteristics of genuine or counterfeit products. It also facilitates prompt communication with the designated representatives of the trademark owner.

In order to obtain a customs recordal, it is necessary to provide evidence of previous or existing infringements with respect to the import and export of goods. An insurance contract is also required in order to secure liability for the unjustified suspension of goods. Once these conditions are met, the trademark will be recorded for a three-year term, which can be extended indefinitely.