In the past 10 years the computing industry has turned more and more to the cloud. Several recent trends in the technology sphere indicate that cloud computing is poised to undergo massive growth. The Internet of Things is just one example of physical objects being tied to the Cloud and gaining more tangible functionality as a result. The Cloud allows users to access applications, information and data online rather than through hardware or devices. It enables a more efficient and shared way of computing as it provides a service rather than a product. Users receive and share information in a way that allows them to access and give access not only to any group of people within their cloud but to the whole world. Consequently, cloud infrastructure must ensure that millions of applications work on a reliable basis. Due to the growing importance of cloud systems, companies increasingly file, sell and acquire as well as license and monetise cloud patents. These patents are now being increasingly aggressively enforced in patent litigation.

Recent studies on cloud-related patent analysis (for further information, please see our article on ‘Cloud computing patent litigation on the rise’) suggest that cloud litigation involves patent assertion entities (PAEs), which sue corporations across all industries in order to enforce their rights. Broad patent claims could cover an unforeseeable range of solutions that run on critical cloud infrastructure. Patents that cover critical technologies in the Cloud have the potential to block whole industries and businesses that run on the Cloud, raising the spectre of an unpredictable level of legal risk. This article investigates recent trends in litigation and transfers of cloud patents involving PAEs.

In order to identify cloud-related litigation, the IPlytics Platform database was used to perform an extensive keyword search of worldwide filed patents in the cloud computing field. The search was based on the patent’s content (title, abstracts and claims). For litigated patents, it also used the description of the infringed products and document dockets. In addition, we combined information on patent transfer data (worldwide) and patent litigation data (United States) to analyse how cloud computing technologies are affected by patent infringement lawsuits. PAEs were identified by examining the patent owner or plaintiff’s business model.

Figure 2: Number of litigated cloud patents in the United States per year

Figure 3: Percentage of cloud patent litigation cases in the United States per year compared to overall US litigation

The plaintiff’s activities in the market were closely examined in order to identify the cause of the recent surge in cloud-related patent litigation. Figure 4 illustrates the number of litigated cloud patents with regard to PAEs and non-PAEs. ‘PAE’s are defined as companies that derive most of their total revenue from patent licensing. The graph shows that most cases of infringement involve PAEs as plaintiffs. PAE litigation has increased significantly since 2017.

Figure 4: Number of cloud patent litigation cases in the United States per year and the plaintiff’s main business model

Figure 5: cloud patent litigation cases in the United States per year as to main industry or business of defending entity

Figure 6 displays the main PAEs that are plaintiffs in cloud-related patent litigation. The highest number of infringement actions in the cloud derives from PAEs such as Clear With Computers LLC, Unified Messaging Solutions LLC, Clouding IP LLC, CTP Innovations LLC and Autumn Cloud LLC. Out of all PAEs actively enforcing patents in the cloud space, Clouding IP LLC, Autumn Cloud LLC, Clouding Corp and Cloud Satchel LLC litigate patents in the cloud space only. Also, their cloud-related names suggest that this is their main area of patent-assertion activity. This result confirms that cloud patents are very lucrative and commercially important enough to found PAEs that specialise in cloud-related patent assertion. 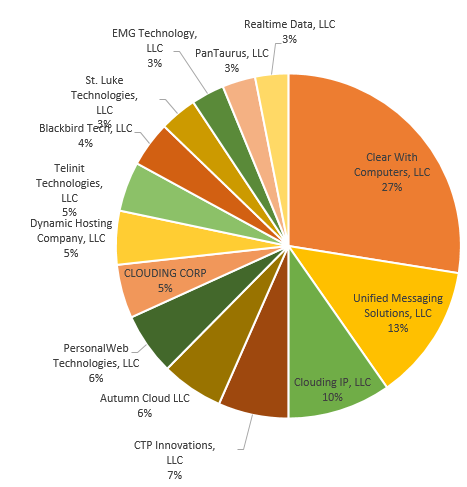 In-depth analysis was performed on a set of 120 PAEs that have at least once been involved in cloud-related litigation to identify potential litigation actions in the near future. This selected sample of PAEs was analysed in order to determine whether there had been recent patent acquisitions of cloud-related patents.

Figure 7: Number of patents acquired by cloud-related PAEs over time

The study reveals that US patent litigation for cloud technologies has been increasing over the past three years. This dramatic surge in litigation was mainly driven by PAEs that are responsible for more than 70% of US-based cloud litigation. Also, in comparison to the overall decreasing patent litigation in the United States, cloud-related patent litigation is increasing and as of today is responsible for about 3.5% of all US-litigated patents. In this regard some PAEs have specialised in only asserting cloud patents. These PAEs also increasingly acquired cloud-related patents in the recent years, which could suggest that they might be further involved in cloud litigation in the future. The main target industries are the internet and communication sectors, with a fall in such litigation on the retail and financial sectors.