PTAB crashers: a who’s who of non-practising IP rights petitioners

Although inter partes review proceedings are designed to provide those accused (or at risk of being accused) of patent infringement with a faster and less costly proceeding to challenge the validity of a patent, they have also drawn the attention of outsiders. There are several types of Patent Trial and Appeal Board (PTAB) 'crasher', each with its own motivation for challenging the validity of one or more patents. What they have in common is that each has filed one or more inter partes review petitions despite having no risk of being charged with infringement of the subject patent(s). To date, PTAB crashers have accounted for 47 inter partes review petitions.

One type of PTAB crasher is patent defence firms. These firms usually make revenue from eliciting fees from practising companies and then file inter partes reviews targeting patents that potentially pose risks to their clients (however, Iron Dome is a patent defence firm that has (or at least had) a different business model). Patent defence firms are often subject to the accusation that they are in privy with their clients and, in some cases, their inter partes review petitions have been denied for failing to list all real parties in interest.

Finally, there are activists that challenge patents because they believe it is in the public interest. The US Patent and Trademark Office fees of $23,000-plus per petition may be a significant deterrent for these types of filer, but by our count two such petitions have been filed to date. 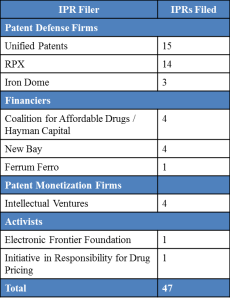