Patent trolling and its backlash – a Nobel laureate perspective

Patent trolls are generally regarded with disdain and lawsuits designed to extract low-value settlements are treated as nuisance litigations that take advantage of the costs of defence – but in reality, things are not so simple

The Federal Trade Commission (FTC) 2016 Patent Assertion Entity Activity Study, which tracks early-stage costs for defending a patent case, defines ‘nuisance settlements’ as those that settle below $300,000. The study concludes that “[n]uisance infringement litigation... can tax judicial resources and divert attention away from productive business behavior”.

Judges have also been taking a stand against such settlements. For example, the now-retired Justice Davis from the Eastern District of Texas used to consider sanctions whenever he determined that a patent owner was driven by the cost of a case rather than its merits, according to a Law360 report from 2011.

The argument goes that patent owners should instead ‘test the merits’ – take cases further into litigation to test whether a patent is valid, enforceable and infringed and determine its value. Put another way, patent trolls that attempt to extract nuisance value are bad and testing the merits of a case is good. The discussion typically ends there. However, things are not so simple.

We can learn from the work of Douglass C North, winner of the 1993 Nobel Memorial Prize in Economic Sciences, due in part to his 1992 paper “Transaction Costs, Institutions, and Economic Performance” (all quotes from North in this article are taken from that paper). Viewing the patent market through the lens of North’s teachings can help us to better understand why things are the way they are.

The main takeaway is that patent trolling or low-value cases are not simply bad – they are an economic response to inefficiencies in patent litigation. In the same way testing the merits or litigating more is not simply good. Such an approach is driven by an institutionally rooted bias to perpetuate an inefficient patent market.

If the testing-the-merits response is accepted as a legitimate solution, the glaring problems within the patent system are overlooked.

Patent litigation makes up a small proportion of the overall patent market.

Overall, patents have numerous uses. Individuals may use them to pitch their ideas to corporations, or start-ups may leverage them to secure equity or debt financing. Companies may use patents to protect R&D investments and to ensure runway for product development and marketing. In these uses, patents serve a supporting role for the development of a patented product or service.

If a patented technology penetrates the market and is taken up by one or more competitors, then it has the potential for monetisable value in and of itself, in the form of licensing royalties and patent sales.

From data derived from PwC’s 2017 Patent Litigation Study and Patexia data published in 2016, approximately 2% of issued patents have the potential for monetisation. There is only one way to determine whether that potential can be realised: patent litigation. Litigation is the sole means for determining the scope and enforceability of patent rights. Its threat and practice set the value for patent sales and licensing transactions.

Applying North’s economic theory, patent litigation is itself the driving force behind the patent-trolling phenomenon that can be seen in today’s market.

North’s analysis of institutions and how they are linked to economic performance partly earned him the Nobel Prize in Economics in 1993, and was a stark departure from neoclassical economic theory. While the neoclassical model assumed efficient markets, it overlooked the institutional requirements for the creation of such markets.

North developed a framework to analyse institutions and the way that they evolve, to create a more grounded and realistic economic model. The cornerstone of his analysis rested on one major factor: transactional costs.

Transactional costs are all costs incurred in the operation of an economic system. The more complex the system, the more people must be employed to operate it. Lawyers, bankers, politicians, accountants, clerks and managers are all occupations largely engaged in transactions.

North set forth a simple, yet profound observation: “[t]he success stories of economic history describe institutional innovations that have lowered the costs of transacting and allowed more of the gains from trade to be captured, thereby permitting the expansion of markets.”

Informational costs determine the value of a good or service. In patent litigation, this is the cost to determine the scope and value of a patent – is it valid, enforceable and infringed and what is it worth?

Table 1. Cost of patent enforcement in the United States

Table 1 pulls data from the American IP Law Association (AIPLA) 2017 report from its annual economic survey. It provides the median costs to reach a final determination regarding the scope and value of a patent, based on the amount at stake.

Of these costs, those borne by defendants are higher than those for patent owners. Generally, simple case costs range from $250,000 to $500,000 and can reach up to $1 million or more. According to PwC’s 2017 Patent Litigation Study, the median time to trial is 2.5 years. The average time from trial to a final decision on appeal is 1.4 years, according to Gibson Dunn’s “Federal Circuit Year in Review 2015/2016”. In all, it costs millions and takes several years to determine whether a patent is valid, enforceable and infringed and what it is worth.

However, a final determination is not actually final. If a court renders a determination with respect to one defendant, that determination is not binding on the next. The next defendant has a right to re-litigate and reassess the same issues of a patent’s validity, enforceability, infringement and value. Although some issues may be streamlined for subsequent litigations, informational costs are serial and apply for every defendant.

Settlement represents a point at which the parties come to an agreement regarding the scope and value of patent rights. According to Wilson Sonsini Goodrich & Rosati PC’s “IP Litigation in United States”, 90% of cases settle before a claim construction hearing and between 95% and 97% settle before trial. The average cost for a defendant to reach a settlement is $950,000, according to Patent Progress, although there are additional costs for patent owners. The average time period to reach a settlement is between one and two years, according to estimates based on RPX Corp’s “2015 Report NPE Litigation, Patent Marketplace, and NPE Cost”.

Therefore, it costs an average of approximately $1 million and takes at least one year for an agreement to be reached.

Figure 1. Time to trial in US patent litigation 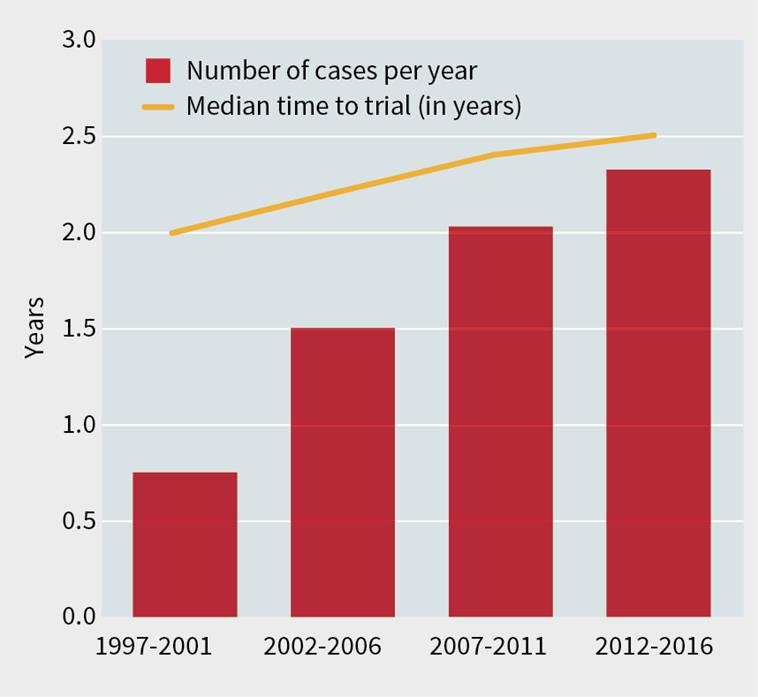 Enforcement costs are high for patent owners because enforcement subjects a patent to a high degree of risk of invalidity. Coupled with low success rates – between just 9% and 14% according to the IAM article “Why plaintiffs in US patent cases who understand the odds of victory are almost always best off settling” – many patent owners avoid enforcement altogether.

From North’s economic framework, patent litigation is a grossly unproductive institution. In the patent monetisation market, enforcement costs both swallow and drive informational and bargaining costs. Enforcement and its threat are prerequisites to determine the scope and value of a patent and for parties to reach an agreement.

Due to this exorbitant transactional cost structure, North would conclude that patent litigation fosters an extremely unproductive and backwards patent monetisation market.

North was recognised for not only providing a framework to analyse institutions, but also for revealing the driving force behind institutional change. He observed that “[o]rganizations, and specifically their entrepreneurs, are the actors in institutional innovation”, the “sources of change are the opportunities perceived by entrepreneurs”.

In the patent monetisation market, the entrepreneurs are the specialists in patent licensing and monetisation.

North realised that “[c]hanges in relative prices have been the most common external sources of institutional change in history”. As entrepreneurs learn and acquire new skills, it leads them “to construct new mental models to decipher the environment, which in turn alter perceived relative prices of potential choices”.

As expected, high invalidity rates and low success rates increase the perceived risk of taking cases deeper into litigation and drive choices that favour early settlement. The trade-off to early settlement is a reduction in settlement value.

According to North, low-value settlements or litigations designed to reduce informational, bargaining and enforcement costs follow a historical trend of institutional change driven by patent entrepreneurs, to mitigate transactional costs and the inherent risk of patent litigation. By North’s measure, low-value settlements that prompt early settlements are an improvement on patent litigation, because they reduce transactional costs and more closely approach a zero-cost exchange.

Notwithstanding the above application of North’s analysis, critics will argue that low-value settlements are extortion. If the settlement demand is low, then it is a weak case to begin with. If a party has a strong case, then they will take the case further into litigation and demand a higher settlement.

Statistically speaking, strong patent cases are rare. When a patent owner is faced with an invalidity rate of more than 90% and a less than 15% overall chance of winning, the vast majority of patent cases have some vulnerability that exposes a weakness.

Statistics aside, this critique is a response which promotes testing the merits in patent cases. Put another way, it is a response that promotes increasing transactional costs (ie, informational, bargaining and enforcement costs) in patent transactions.

The bias to maintain extended and costly litigation exists because this practice created the very actors that benefit from such litigation (eg, law firms, in-house counsel, testifying and consulting experts, mediators, court-appointed technical advisers, reverse-engineering labs, litigation financiers, jury consultants, discovery vendors and others that are responsible for advocating and presiding over patent disputes).

Extended and costly litigation even justifies the role of judges and the court system in patent disputes. This explains why a testing-the-merits (ie, litigate more) approach even came into existence. The “interests of these existing organizations… produce ideologies [that] ‘rationalize’ the existing institutional matrix and therefore bias the actors in favor of policies conceived to be in the interests of existing organizations”, North claims.

Of course, there are examples where patent owners have slam-dunk cases where they should take cases further into litigation and demand higher royalties. But should this be the baseline norm?

According to North’s reasoning, the norm should be patent transactions that approach a zero-cost exchange. These are embodied in low-value settlements, because this encourages earlier settlements, which reduce transactional costs. Extended and costly litigations should be the exception, not the norm.

If North were to assess the US patent market, he would not demonise patent entrepreneurs as trolls. For a market’s unproductive institutions, he would advise that “[b]oth the institutions and the ideological perceptions of the participants must change”. He would start with an assessment stating that the patent monetisation system is limited within the confines of patent litigation, understand why its inefficiencies led to the economic phenomenon of low-value settlements, and why the backlash against low-value settlements is itself an institutional bias to perpetuate an unproductive institution.

North would recognise that low-value settlements are a band-aid for a systemic problem within the patent monetisation system. The knee-jerk reaction to testing the merits, applying North’s approach, is not the solution, but part of the problem itself.

If we limit our options to low-value settlements and test the merits, we are restricted within the confines of a faulty patent monetisation system. Instead, North encourages the consideration of better ways to implement the patent monetisation institution.

How can the scope and value of a patent be more efficiently determined? Can the adversarial nature of patent bargaining be minimised? Can enforcement and its threat be limited only to when it is absolutely necessary, rather than being the first and only option?

Such a patent monetisation market is yet to be created, but instead of repeating the typical patent troll narrative, why not work towards establishing one?