The Internet of Things (IoT) has taken the world by storm over the last decade. There has been a paradigm shift towards automation and adoption of control systems through the use of intelligent technology. This has been made possible due to affordable computing, which has allowed for flexible and efficient systems to be built, which has transformed lives.

Connected devices and smart computing have penetrated every industry from agriculture, logistics and hospitality to energy, healthcare and city planning. One interesting development in the logistics sector has been the increased use of IoT in connected vehicles to enable cruise control, also known as platooning or road-trains. This involves driving a group of vehicles along an automated highway system.

There are many benefits to truck or vehicle platooning, the most obvious being reduced congestion. It also allows for greater fuel economy due to reduced air resistance and increased road capacity, allowing roads to be better utilised. In addition, platooning claims to increase safety, due to its accurate longitudinal and lateral guidance. On longer trips, the vehicles could be mostly unattended while in following mode.

However, this system is not without its shortcomings. Some experiments have failed in traffic due to being hacked by remote computers, causing hazardous situations. In addition, once these automations are set up, drivers could be less reactive to their surroundings if hardware or software systems were to fail.

From a commercial application standpoint, there are four key categories of stakeholders that are key to platooning:

This article primarily focuses on developers and users.

In order to analyse the global IP landscape, the IPlytics Platform tool was utilised to identify patents, standards contributions and start-up profiles related to platooning technologies. It shows that 1,659 patents in total have been filed from 723 INPADOC families in this field. The companies that own the innovation portfolios with the highest impact come from Europe – Swedish company Scania AB and German companies Continental AG and Volkswagen AG.

Who are the major players? 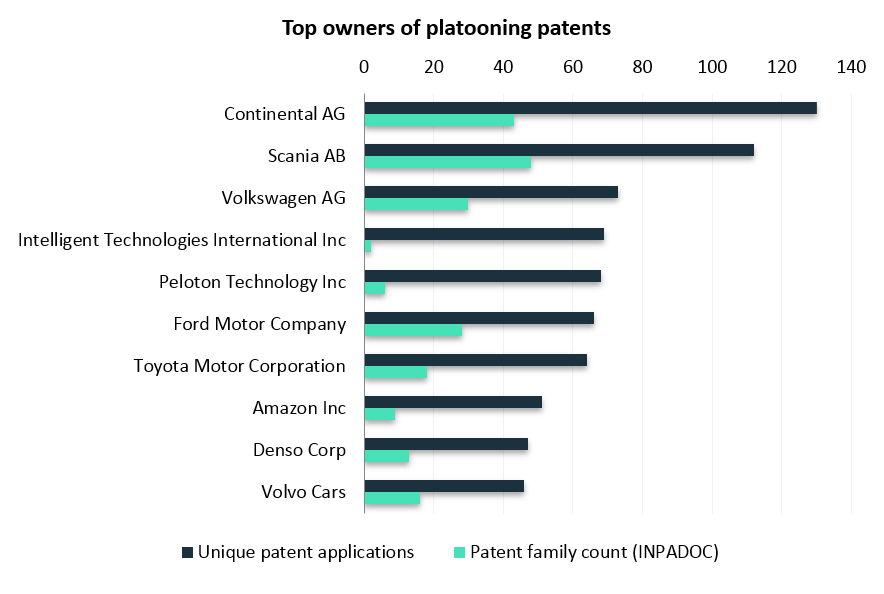 There has been growing interest in the concept and execution of truck platooning. The pioneers and the first movers in this space are heavy-duty truck manufacturers, such as Continental, Scania AB and Volkswagen. Amazon Inc’s inclusion is notable, as it is the only company that does not belong to the automotive sector. However, it does add up as Amazon is the largest e-commerce company in the world and depends heavily on the trucking and automotive industry for its business.

Meanwhile, another point of contention that makes this data more interesting is the patent filings of two companies in this area – Intelligent Technologies International (ITI) and Peloton Technology Inc – which can be classified as start-up/mid-size companies. ITI is an R&D company that was split from ATI in 1998 to concentrate on active safety products development. Peloton, founded in 2011 in California, has taken in $18 million so far from investors, including Lockheed Martin and Intel. It is developing the concept of ‘convoy’, wherein drivers remain fully engaged and retain steering control while the system controls acceleration and braking, similar to adaptive cruise control. This truck platooning concept can save an average of 7% in fuel costs per vehicle, according to its experiments. Peloton seems a likely candidate to move towards fully autonomous trucks given its current offering.

Figure 2. Evolution of intellectual property in platooning over time 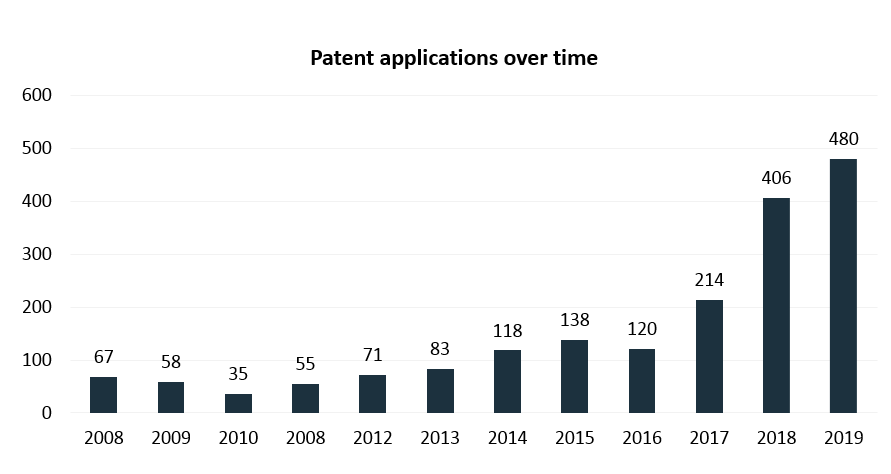 Early records suggest that there was a lot of emphasis placed on R&D until 2013. Figure 2 shows a rise in IP rights and ownership post-2013, which is due to the enablement of wide-scale testing, feasibility monitoring and upscaling. Beyond 2020, the transportation industry in particular will deploy driver-guarded truck platooning – an application that will eventually seek to broaden and encompass wider commercial segments.

Figure 3. Penetration of platooning patents across the world 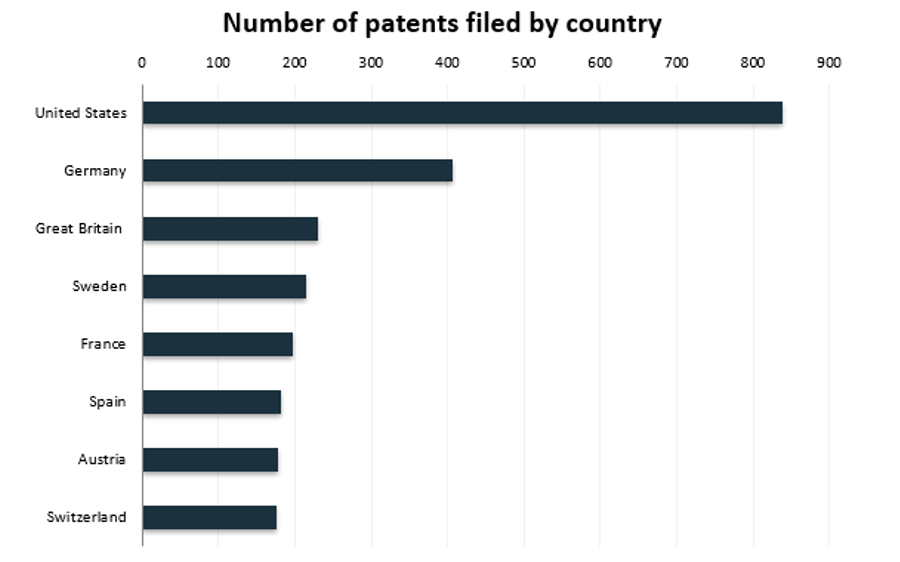 It is unsurprising that the United States is well ahead in this industry (see Figure 3). However, European countries such as Germany and Sweden are also familiar with this concept, thanks to important advances through projects such as KONVOI and SARTRE in the last decade. The list is dominated by European countries, particularly Western European ones, where there is a strong reception of and appreciation for IoT projects. 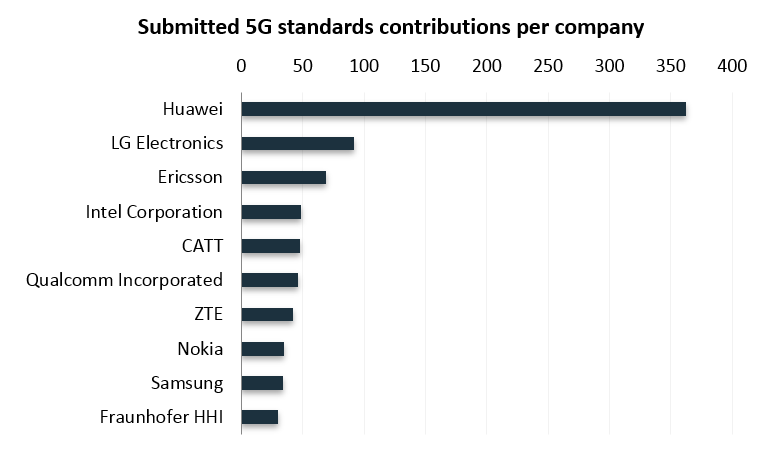 The interconnectivity of different systems and the communication across multiple devices relies on a common specification of the standards. Standards development of complex technologies such as 5G or WiFi therefore often integrates many patented solutions. Beyond the patent data analysis, it is also worth looking at the companies that are actively involved in standards development for 5G, which in our analysis especially relates to V2X and 5G standards as well as short-distance standards such as WiFi standards (802.11p). These standards are specified in international meetings where companies present and submit technical contributions.

Using the IPlytics Platform’s database and analytics, Figure 4 shows companies that have contributed to develop these standards by submitting technical contributions. The standards contribution data for the platooning concept is highly interesting, but unsurprising. In keeping with the global thrust for 5G and new communication standards, Huawei has the highest number of contributions in standard documents with regard to platooning. The upcoming 5G system could prove to be a promising approach to implementing this concept and ensuring its widespread adoption for commercial purposes.

The implementation of this concept is not without its fair share of challenges, which include:

No innovation is free from IP infringement and global litigation. With regard to the number of current claims and IP litigations, the IPlytics Platform shows that Toyota is embroiled in a few patent cases. United Parcel Service is also currently litigating against WNS Holdings.

Table 1 highlights various parameters, such as market cap, coverage and technical relevance, to help illustrated what these IP contributions mean. IPlytics makes use of statistical patent valuation indicators to analyse the strengths, weaknesses and positioning of patent portfolios.

The market coverage indicator estimates the patent family size by counting each country of a patent family divided by the country’s gross domestic product. The technical relevance (TR) indicator is calculated by counting the number of prior art citations that a patent receives (forward citations).

Table 1. Representation of market share, coverage and relevance for the top IP holders.

One of the most surprising insights from Table 1 is that Volkswagen’s TR metric is comparably low. It appears that its patents lean more toward adaption and evolution of an existing technology as opposed to new innovation. ITI and Amazon hold high TR value, which reflects a highly innovative and relevant patent portfolio. It is also surprising to note the low TR for Scania and Continental, while their respective family shares remain the highest among their competitors. Perhaps the most stable in the list are Ford and Volvo, which have ensured healthy numbers across the measured parameters.

Factors such as a rise in government emission regulations and a reduction in fuel consumption are driving truck-platooning market growth. However, the high cost of platooning technology and rise in security and privacy concerns are anticipated to hinder further growth. In addition, the production of fully autonomous trucks for platooning and to extend the size of fleets can lead to remarkable opportunities for the various stakeholders that are influencing the transportation market. The global truck-platooning market trend is expected to increase as there is a growing need for automation in the transport industry to avoid hazardous situations and increase efficiency.

IP leaders operating in this space will be eager to establish competence in the market in order to make this concept fully functional and scalable. They will need to keep in mind various regulations and policies from governments and international bodies working to develop proof of use, infrastructure and standards for platooning. It is imperative to be aware of technological advancements such as 5G that will have a significant impact on how this plays out within the transportation industry. With a sharp focus being placed globally on sustainable practices and environment protection, it will be interesting to note how any disadvantages of platooning can be offset by its many advantages, such as better energy conservation and increased road capacity.