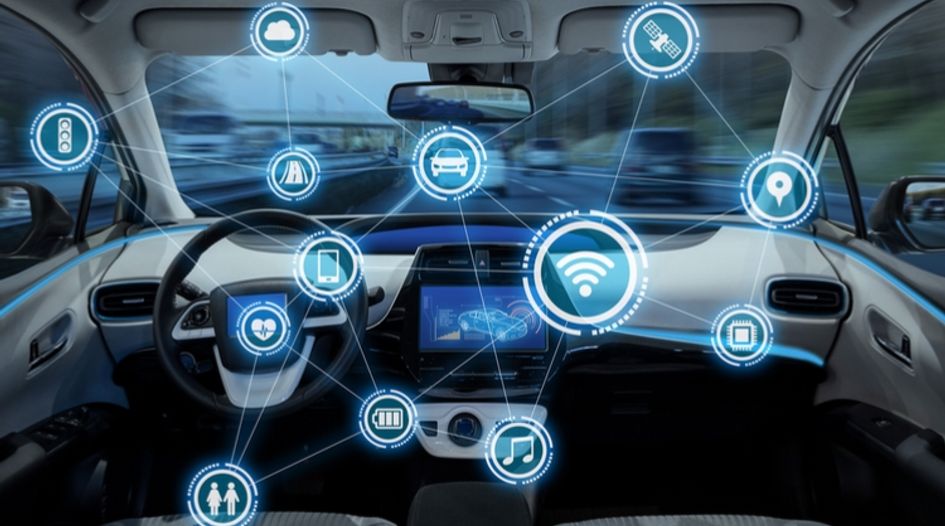 In the Fourth Industrial Revolution – The Internet of Things (IoT) – there has been a push by car manufacturers to provide customers with what is known as “connected cars”. These provide, through a telematic control unit (TCU), the ability to connect to the Internet and share such access with any mobile devices located within the car. Such access facilitates not only connected services such as emergency dispatch, concierge, maps, weather, traffic, driving analytics and satellite radio, but also various autonomous driving (AD) functionality.

With this access to the internet comes the question of whether the TCU’s processor in such cars may need a licence from a multitude of individual patent owners and pools to implement the 2G, 3G, 4G and 5G cellular standards in a way reminiscent of the smartphone patent wars that took place in the past decade.

When the topic of standards is raised, the debate that follows is whether those who hold standard essential patents (SEPs), and their commitments through various standard setting organisations (SSOs) to license such patents on FRAND terms, are in reality licensing under a reasonable royalty, and what types of licensing models are exactly fair and non-discriminatory.

The academic and popular press, as well as global court decisions, are filled with approaches, analysis, and commentary regarding these questions. What has not been addressed, however, is a more fundamental and upstream question: Who decides whether a patent is standard essential in the first place before we even get to the FRAND analysis?

SSOs are national or international organisations - typically private and non-profit - whose members include for-profit company participants seeking to establish one or more technical standards that will be incorporated into a product or technical system. Nearly all SSOs have rules requiring participants to disclose the patents they own that relate to a proposed standard. Thus, the SSO disclosure rules ensure that SSO members make an informed decision when voting on a proposed standard that is (partially or wholly) patented.

For some companies, participation in SSOs is a means to earn revenue when the standard gets adopted and eventually used broadly. To ensure licensing income in the future, the strategies adopted by some participants include declaring a significant number of their patents as being “potentially essential” to the standard during the standard development process. Because it is often unclear until late in the process which technical specifications will ultimately be implemented in the standard, companies which intend to earn money on licensing register patents with the SSO throughout the entire standard development process in order to maximise the likelihood of owning patents which map to the standard.

This phenomenon is well illustrated within the European Telecommunication Standards Institute (ETSI),  the most relevant SSO with respect to the 2G, 3G, 4G, and 5G cellular standards (whose participants include both those which develop digital mobile communications products and others which do not). The ETSI Intellectual Property Policy states in relevant part:

[E]ach MEMBER shall use its reasonable endeavours, in particular during the development of a STANDARD or TECHNICAL SPECIFICATION where it participates, to inform ETSI of ESSENTIAL IPRs in a timely fashion. In particular, a MEMBER submitting a technical proposal for a STANDARD or TECHNICAL SPECIFICATION shall, on a bona fide basis, draw the attention of ETSI to any of that MEMBER's IPR which might be ESSENTIAL if that proposal is adopted.

In accordance with this policy, ETSI maintains a database of patents which they have been informed as being essential (or potentially essential) to any of their standards. Yet, in the recent US TCL v Ericsson case, the court decided that the total number of SEP families was 2,799 for 2G, 3G and 4G. The ETSI database, however, contained more than 153,000 patents and patent applications (forming more than 11,469 patent families) declared to be potentially essential by various participants!

This situation presents an obvious, but non-trivial problem for implementers of a standard, such as OEMs and their suppliers. That is, when faced with licensing requests from patent owners, they are often also faced with an imposing number of non-SEP portfolios, yet all claimed to be standard essential. As a consequence, implementers do not know which patents they actually need to license. To make such a determination then requires hiring patent and technical specialists at enormous costs.

Principally, it is questionable why implementers should bear the costs of expending internal resources as well as hiring external consultants to filter out non-essential patents in so-called SEP portfolios. Viewed from an economic perspective it is nonsensical that producers of goods implementing a standard for the benefit of consumers bear the costs and must expend resources filtering out non-essential patents claimed to be infringed by a SEP patent holder/licensor.

The authors propose a solution to the problem of determining whether a patent is standard essential: let the European Patent Office (EPO) decide!

The EPO is an ISO 9001 certified organisation and widely considered to be one of the top patent-granting bodies in the world. Its membership includes 44 countries (38 EU member states, two EU extension states, and four validation states), and it operates in a self-funding manner (ie, it receives no public financing) with an annual budget of €2.3bn (in fact, it has had an annual operating budgetary surplus of at least €270M since 2010). As of December 2017, the EPO had approximately 6,800 employees, with approximately 4,400 of those being highly-qualified patent examiners working in all technological fields. In 2017, the EPO handled over 165,000 patent applications from around the world and granted over 105,000 European patents.

The wisdom of allowing the EPO to determine the essentiality of patents for a particular standard becomes clearer when one considers the following:

This proposal may also have a non-obvious, positive consequence: the publications of the EPO’s essentiality determinations may result in a shift of SSO participant’s patent filing practices. That is, participants may start to put significantly more effort into filing patent applications which have a high likelihood of being truly standard essential. As a consequence, the EPO may experience significantly fewer patent filings relating to standards which should have a positive (or at least neutral) effect on its resource management when taking on these additional responsibilities.

Practically speaking, the first step in implementing the authors’ proposal would be to have the member states authorise the EPO to determine whether a patent is standard essential. This additional activity could either: (1) immediately be offered as a service to SSOs, their participants, or the public at large; or (2) explicitly added to the mandate of the EPO.

In the first case, the service would be offered at a fee, in the latter, the cost would probably have to be borne by the member states. In the latter case, an amendment to the European Patent Convention – the multilateral treaty under which the EPO operates – would be needed. In the former case, it is not legally clear that such an amendment, and the requisite diplomatic conference to hold a vote by the member states, would be needed.

We explore the route of a fee-based service offering because we believe that the member states may be reluctant to approve additional EPO-mandated activities which may require additional public funding on their respective parts.

Next, individual SSOs would need to “opt in” to this new EPO service by amending their IPR policies to state, for example:

After giving notice of a SEP under this Policy, the determination of whether such patent is actually a SEP shall be finally settled by the European Patent Office (EPO) in accordance with their SEP Essentiality Determination Proceedings. Upon obtaining a Certificate of Essentiality from the EPO, only then shall [the SSO] add such patent to the database of essential IPR, and only then may the patent holder assert such patent against any party on FRAND terms as required under this Policy.

Lastly, it is not difficult to imagine that the EPO would be able to devise equitable rules and procedures for these new “SEP Essentiality Determination” proceedings – similar to examinations and oppositions – where a request is assigned to a qualified examiner, a first instance determination is made within a reasonable timeframe, and an optional appeal procedure is available.

While the sample SSO policy amendment language provided above assigns costs to the patentees, the SEP Essentiality Determination service provided by the EPO may be financed in a variety of ways:

As traditional car manufacturers, their suppliers and various new entrants to the automotive field race to develop AD and connected car technologies, having a world-renowned, patent-granting body such as the EPO decide whether any given patent is essential to a given standard will result in many benefits. It will:

This article reflects the authors’ current personal views and should not be attributed to their current or former employers, or their respective clients or customers.