Patents are a unique type of asset. Due to their intangible legal nature, patent rights can be fragmented along multiple technology buckets, fields of use and geographical scopes, and can accommodate countless overlapping rights in the form of non-exclusive licences. The ability to fragment and overlap patent rights and divide them among many entities creates unique opportunities to optimise financial transactions and maximise investor returns.

For example, in the context of an M&A transaction, patents can serve as a source of non-dilutive unleveraged financing for buyers willing to collaborate with parties interested solely in the acquiree’s patent portfolios. For sellers, finding multiple buyers with complementary interests in the patent portfolio and the operating business can maximise the transaction value and earn shareholders a higher return.

This article discusses a collaborative model for M&A transactions involving patent portfolios and how to maximise value per dollar spent for all stakeholders involved.

Access to the right technology is essential for any tech-based company that wants to thrive. An acquisition effort is one tool for gaining access to that critical technology inorganically.

If an enterprise needs the technology and know-how of another company to build its future and an equity share will not suffice to fund the acquisition, one potential solution could be to seek additional debt financing through a loan collateralised by the target’s own patents.

While this looks attractive in theory, it may be hard to implement due to the difficulty of finding debt providers willing to grant an acquisition debt collateralised by patents – an asset class which is normally illiquid, hard to value and difficult to monetise.

A different way of doing business

This alternative solution functions essentially like a bridge loan that is repaid ‘in kind’. By collaborating with a patent buyer, the acquirer introduces a new source of non-dilutive financing. The closing of the acquisition triggers the immediate closing of the patent purchase and the grant back of a paid-up non-exclusive licence to the acquirer’s operating business.

Ultimately, the acquirer obtains control over a critical technology and know-how for its future growth, the patent buyer acquires valuable patents for its future defensive or monetisation strategies and the target’s equity investors receive an attractive compensation to exit their investments.

In a bidding setting it is important that that acquirer and the patent buyer address some key aspects to structure the joint bid properly:

If the acquirer is subject to significant capture under IP cross-licences, it is important to configure the joint transaction so that the closing sequence is reversed (ie, patent sale preceding the acquisition) and the patents are transferred directly to the patent buyer without being held by the acquirer any time before closing. 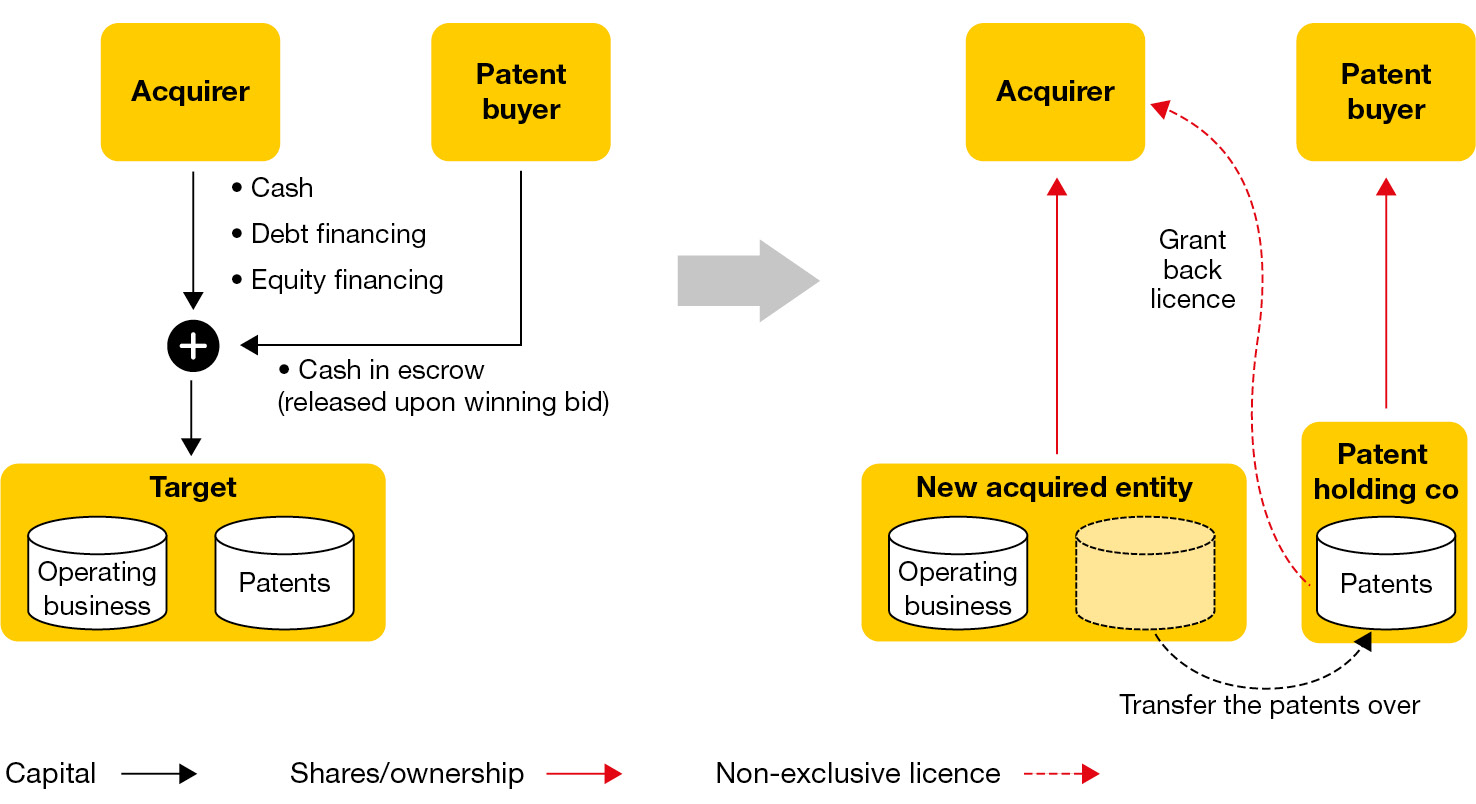 Regardless of the size or business model of the patent buyer, this deal structure may prove necessary for any entity that wants to acquire just the patent portfolio of a target. A company in play will likely decline any direct offer to buy its patent portfolio only without a concurrent transaction to buy the remainder of the company. Divesting just the patents could leave the remaining operating business with a diminished valuation in excess of the patent transfer. Thus, a patent buyer may have to find an enterprise which wishes to buy the remaining operating business to submit a joint offer in order ultimately to purchase the acquiree’s patent portfolio.

On November 6 2012 MIPS Technologies sold itself off in two separate transactions to a consortium of companies led by ARM and to Imagination Technologies Group. MIPS was a fabless semiconductor design company, well known for developing the MIPS architecture and a series of reduced instruction set computer (RISC) processing chips. MIPS sales peaked during the dot-com boom, but it failed to penetrate the smartphone and tablet market and began losing ground to its primary competitor, ARM Holdings.

In April 2012 MIPS retained Goldman Sachs to find a buyer. The final sale involved two separate transactions. Four hundred and ninety-eight of MIPS’s 580 patent assets were sold off to a patent consortium that included ARM and members of Allied Security Trust (AST) – members of which include IBM, Intel, Oracle, Google, Philips, Sony and Avaya – for $350 million. While selling these assets to the consortium, MIPS retained a royalty-free perpetual licence to them.

MIPS retained 82 patents core to its MIPS architecture, but granted a limited licence to these to the consortium led by ARM. The remaining 82 patents and MIPS’s operating business were then acquired by Imagination Technologies Group, a UK-based semiconductor R&D and licensing company most noted for its offering of PowerVR mobile graphics processors and for its Pure DAB radio division.

By acquiring 498 of MIPS’s 580 patents outright and by gaining licences to the remaining 82 patents, the consortium led by ARM was able to neutralise any risk posed by the MIPS portfolio should it end up on the open market and in the hands of an entity that might assert them against ARM or its customers. Imagination viewed the acquisition of the MIPS operating company and its core related patents as an important strategic move to bolster its computer processing offerings. By fragmenting the sale of MIPS into two separate transactions, it was possible to unlock the value in MIPS patent portfolio and sell off the entire company at a 40% premium to its investors.

Sandeep Vij, CEO of MIPS, commented that: “After a thorough review of a wide range of alternatives to enhance shareholder value, our Board of Directors concluded that the best alternative for the Company would be the sale of patent properties to a consortium formed by AST, and a sale of the Company to Imagination. Importantly, as part of Imagination, the MIPS architecture will continue to be supported, and protected by MIPS patents. This highly successful outcome builds upon the rich heritage of the MIPS processor architecture, while effectively monetizing the Company’s valuable patent portfolio.” 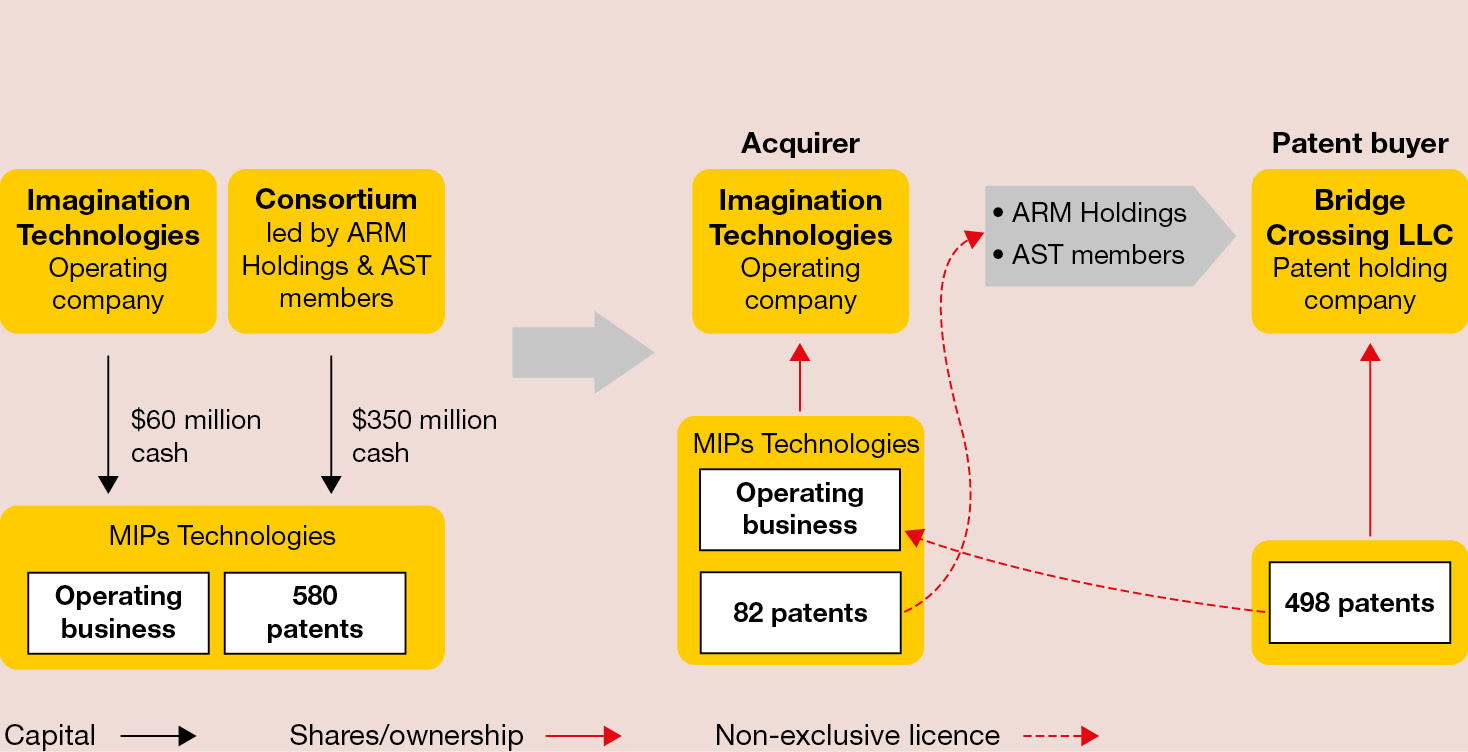 Acquisitions become financially more efficient for purchasers by unlocking the value in the target’s patent portfolio and selling it to a separate patent buyer as part of a three-way transaction. Now consider the same transaction from the seller’s perspective.

The seller has the challenge of getting the highest purchase price possible for the target and all of its assets for the investors in order to maximise investor return. However, often when a company is being acquired, the target’s patent portfolio is not valued highly as a part of the transaction – that is, when it is not outright ignored by the acquirer. Typically, the acquirer is primarily interested in just the operating company and its non-IP assets. So how can the seller overcome this?

The solution is value-added fragmenting. Unlocking value in the patent portfolio for the target’s investors requires fragmenting it out of the acquirer’s transaction and finding a separate patent buyer willing to collaborate with the acquirer in the deal. Finding a separate buyer for the patent portfolio adds non-dilutive capital to the transaction, boosting the sales price and maximising the seller’s return.

Novell acquired by Attachmate, sells some patents to Microsoft

Novell agrees to be acquired by Attachmate for $2.2 billion and to sell certain IP assets to CPTN Holdings LLC, a technology consortium led by Microsoft Corporation.

Founded in 1979, Novell grew to become a leader in software development and services, contributing to the emergence of local area networks. Novell’s market share began to drop steeply in 1995 due to the emergence of networking functionality in Windows 95, Linux and OS/2, which obviated the need for Novell’s products.

After a long period of decline and stagnation, on November 22 2010 Novell announced a merger with Attachmate Corporation for $6.10 per share, along with the concurrent sale of Novell’s intellectual property for $450 million in cash to a consortium led by Microsoft and CPTN Holdings LLC. The other members of the CPTN Holdings LLC consortium included Oracle, Apple and EMC. The cash payment was to be reflected in the merger consideration paid by Attachmate. Attachmate is a privately held company based out of Seattle which focuses on secure terminal emulation, legacy integration and managed file transfer software. The sale of Novell to Attachmate at $6.10 per share constituted a 28% premium over Novell’s closing share price on March 2 2010, the trading day just prior to the public disclosure of an initial offer for acquisition of Novell.

“After a thorough review of a broad range of alternatives to enhance stockholder value, our Board of Directors concluded that the best available alternative was the combination of a merger with Attachmate Corporation and a sale of certain intellectual property assets to the consortium,” said Ron Hovsepian, president and CEO of Novell. “We are pleased that these transactions appropriately recognize the value of Novell’s relationships, technology and solutions, while providing our stockholders with an attractive cash premium for their investment.”

Under the agreement with Novell, CPTN was to acquire approximately 882 patents and patent applications from Novell in a two-stage process. CPTN would initially acquire the 882 patent assets from Novell and then subsequently the members of CPTN were to allocate rights and ownership to the 882 patents among themselves. 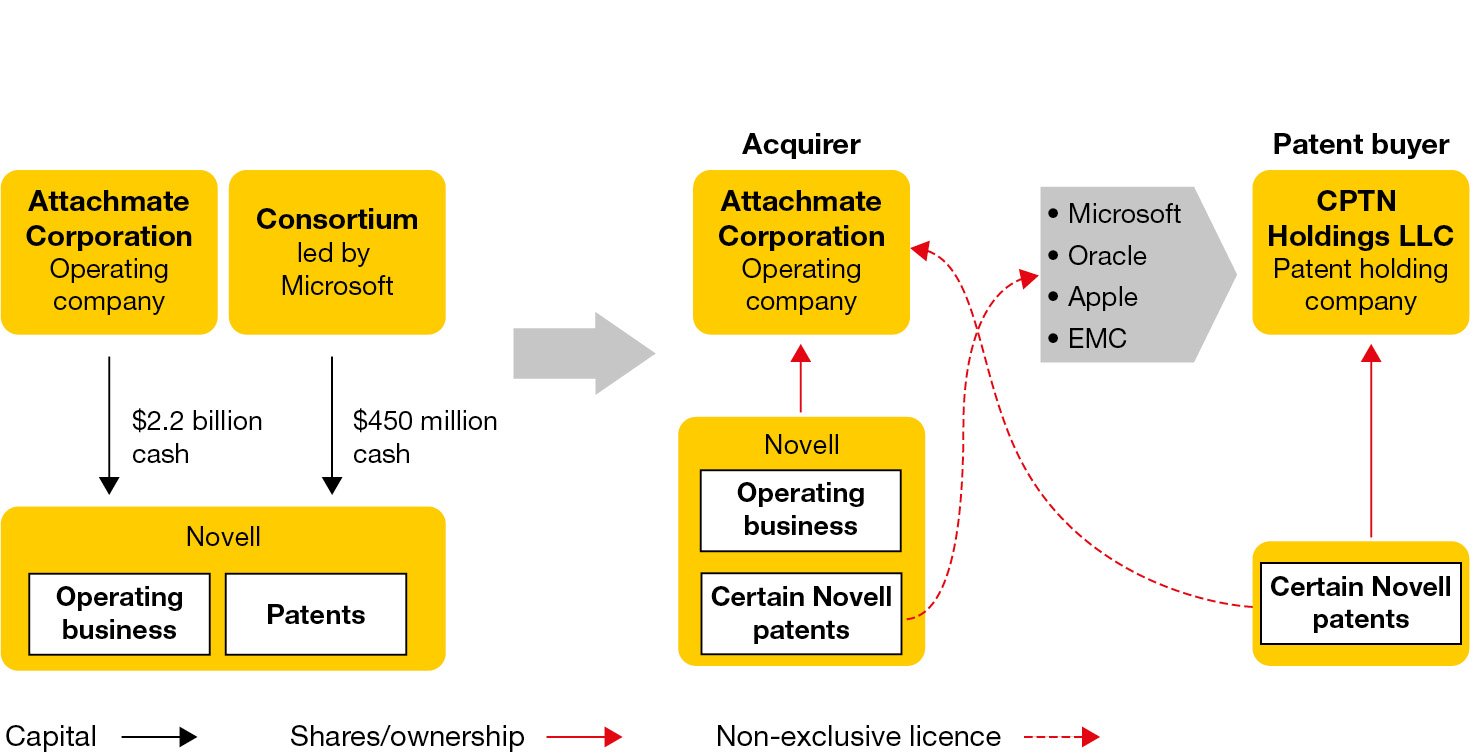 The Department of Justice objected to the initial agreement for the sale of Novell’s patents out of concern that the deal would jeopardise the ability of open source software, such as Linux, to continue to innovate and compete in sectors such as mobile operating systems, middleware and virtualisation. It permitted the deal to proceed contingent on several stipulations, including the following:

After adjustments to the deal were made as required by the Department of Justice, Novell announced the completion of the merger with Attachmate Corporation for $6.10 per share in cash on April 27 2011, along with the sale of the patent assets to CPTN Holdings LLC for $450 million in cash.

Collaborative models to optimise financial transactions involving intellectual property can maximise value per dollar spent for all stakeholders involved. In the context of an M&A transaction, patents can function as a source of non-dilutive or unleveraged financing for acquirers willing to collaborate with parties interested solely in the acquiree’s patent portfolios, making the transaction more efficient for them. For sellers of target companies, fragmenting the company to separate out the patent portfolio for a different purchaser can yield higher returns. In the end, successful financial transactions of intellectual property require creative deals and collaboration is the key.

For a would-be acquirer with limited financing options, finding a buyer for the target’s patent portfolio and making a joint bid can provide an extra source of non-dilutive financing and help to close the deal. Keep the following points in mind to structure the optimal bid: