An in-depth analysis of medical technology-related patent portfolios reveals that Johnson & Johnson is the second largest innovator in the field, owning a significant number of high-quality patents in crucial sectors such as image analysis and AI

Johnson & Johnson not only holds the title of the world’s largest healthcare company but, according to PatentSight, it is also the leading innovator in medical technologies (medtech) and currently ranks second in the firm’s Top 100 Digital Innovators report.

Produced in cooperation with Swiss-based consulting and economic research company EconSight, the study determines the companies leading global innovation in the digital space by analysing patents that address the intersection between digitalisation and traditional technologies.

Figure 1 shows that the number of high-quality active patents, measured by Competitive Impact, has almost doubled in the past five years. Competitive Impact is a PatentSight tool that considers the technology relevance and market coverage of a portfolio; its value is stated relative to other patents in the field, where one represents the global average. 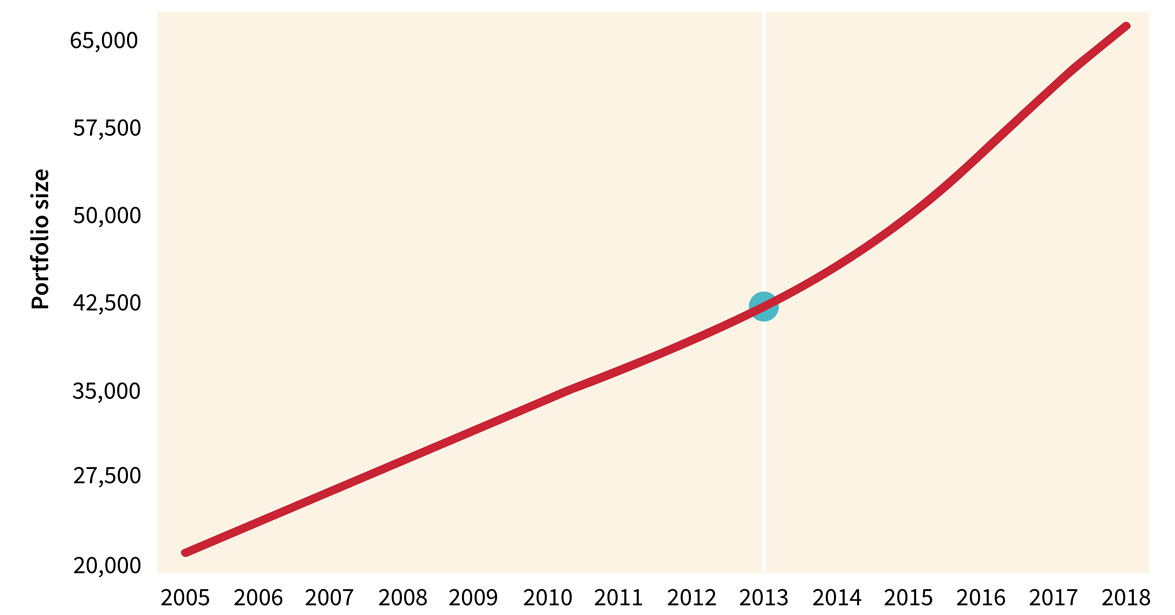 Note: This analysis counts only patent families with a technology relevance that is higher than the worldwide average of one

The digitalisation of the industry has opened up the playing field. Heavyweights include Medtronic – the second biggest innovator in medtech – and Intuitive Surgical, as well as diagnosis device manufacturers such as Siemens, GE, Philips and Canon (see Figure 2). Tech companies have also penetrated the industry, with Alphabet, Apple, Samsung and Qualcomm featuring. 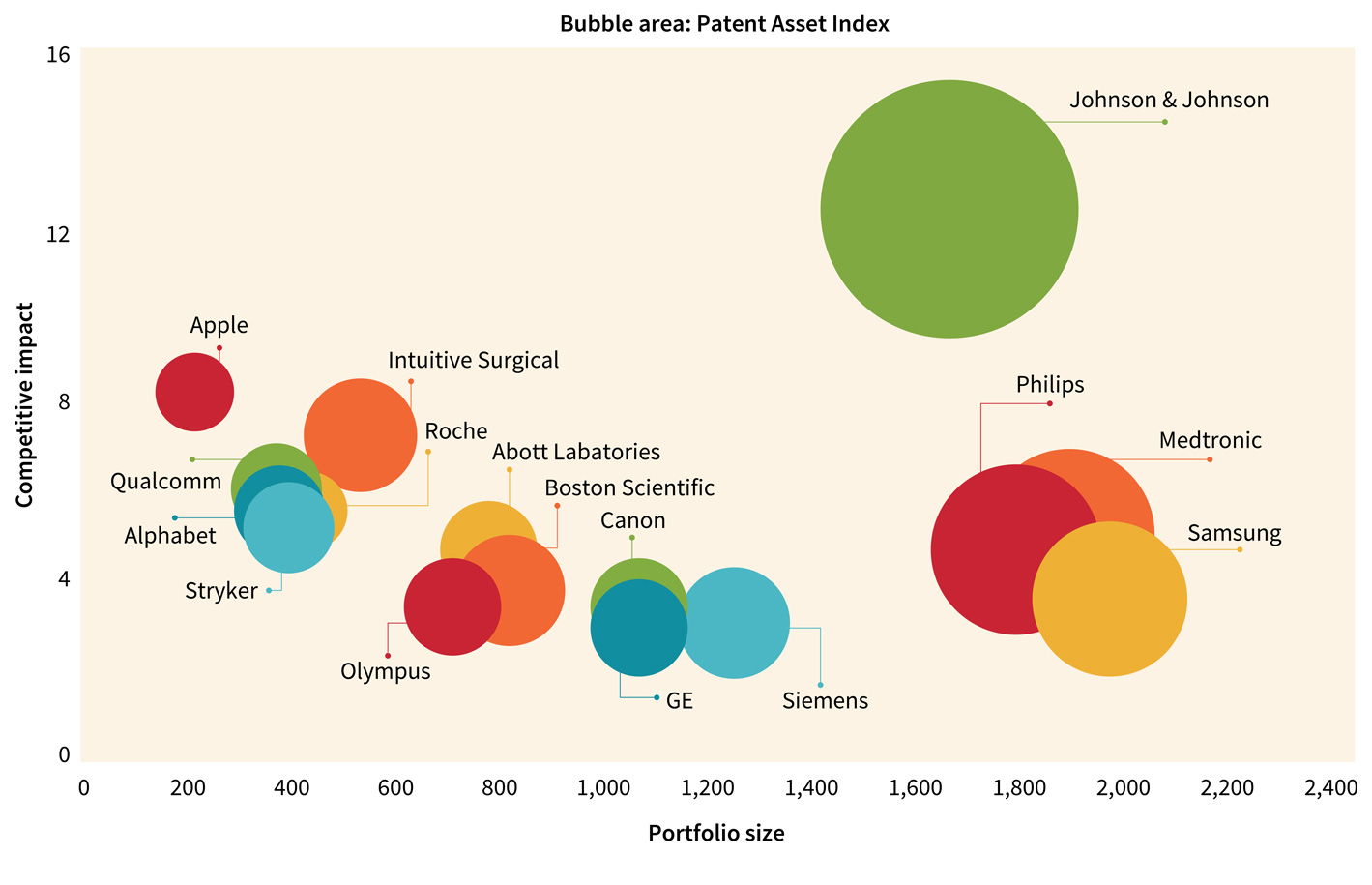 Note: Patent Asset Index considers the number and quality of active patents to calculate the overall strength of a patent portfolio

Alongside Medtronic, Johnson & Johnson has long been a leader in the field (see Figure 3). Meanwhile, Samsung’s activity is also worth noting, having significantly increased in recent years – with more than 522 patents filed in 2017.

Analysis of the Patent Asset Index, which is the cumulative strength of the portfolio, shows that Johnson & Johnson owns a high volume of quality assets (see Figure 4). Meanwhile, up-and-comers to note are Apple and Alphabet. 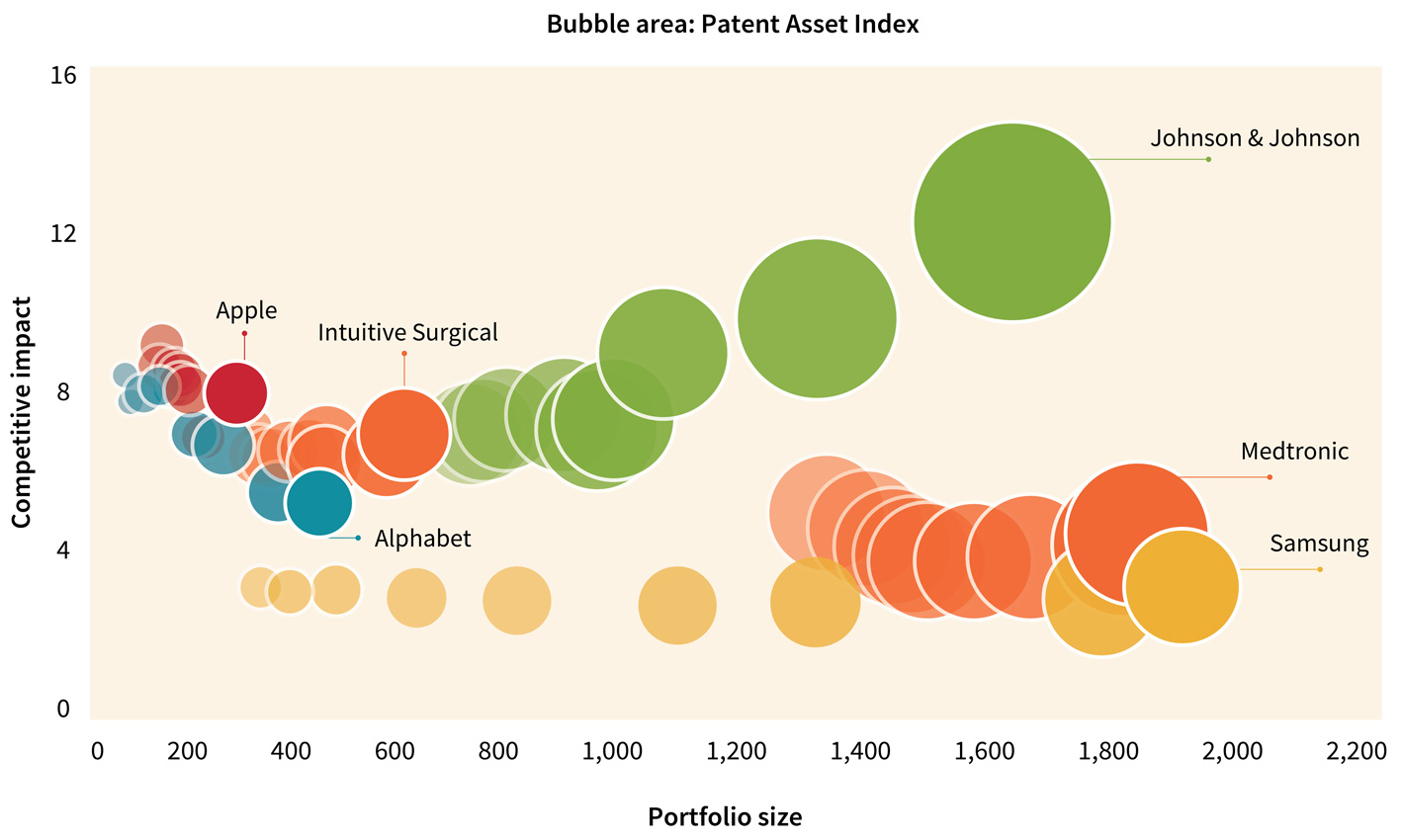 PatentSight also drilled down into the most relevant sub-sections of medical innovation to obtain a more dynamic view of the leading players’ portfolios (see Figure 5). The data included image analysis and AI, wearables, ultrasonic medical devices, computer-aided surgery and wireless communication in the medtech environment, as well as surgical instruments (eg, endoscopes, glucose measuring and pacemakers). Patents that did not belong in any of these areas were grouped under “other” and omitted from the findings.

Image analysis and AI is the most important sub-sector to watch. The second is wearables, including biosensors and other devices that focus on mind and body interaction. This area is sometimes referred to as ‘TrendHealth’ or ‘EHealth’ and is highly significant for technology companies, as well as the pharmaceutical and medtech players, explains William Mansfield, consultant at PatentSight. 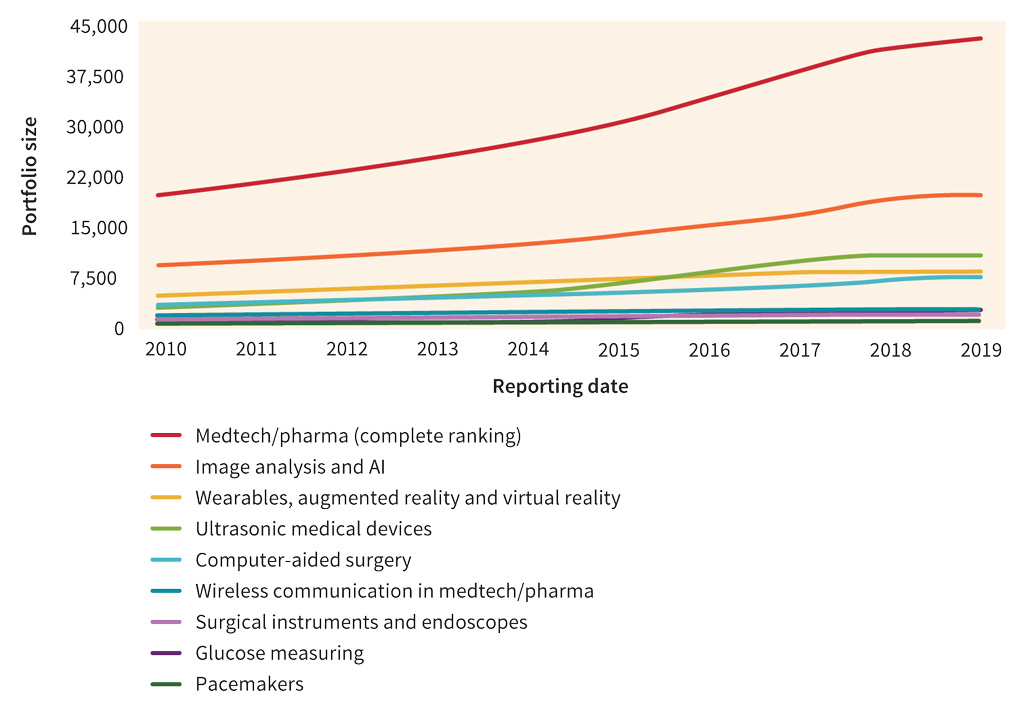