The summer months are usually when the news cycle slows down somewhat. This year, thanks in large part to Intel’s announcement that it was auctioning off a chunk of its massive portfolio (which it subsequently took back off the market when it signed a deal with Apple) and several other headline-grabbing stories, June and July were bumper months for reads on the IAM platform. Here are 10 of our biggest stories in order of most reads.

In what looks set to become one of the highest profile patent sales in years, Intel has put its intellectual property relating to cellular wireless connectivity on the auction block. The company is seeking to divest around 8,500 assets from its massive portfolio.

The news comes as the chip giant searches for a buyer for its 5G smartphone modem business, having announced in April that it was pulling out of the market. That was after it had become increasingly clear that the company, which has been the supplier of 4G modem chips to Apple for the last few years, was struggling to release a 5G product even though the rollout of the next generation of mobile technology is well underway.

The auction offering is comprised of two parts: the cellular portfolio and a connected device portfolio. The former includes approximately 6,000 patent assets related to 3G, 4G and 5G cellular standards and an additional 1,700 assets that read on wireless implementation technologies. The latter is made up of 500 patents with broad applicability across the semiconductor and electronics industries.

According to Kovacs, the stockpile of assets received what is described as “very strong market interest”, but the exclusivity that the company had entered into with one party “precludes further engagement with other bidders at this time”. The email holds out the prospect that the auction process could be re-opened – presumably if the company fails to finalise a deal – but at this point it would be a surprise if the bidder were to walk away.

In a significant shake-up to Nokia’s senior leadership team, Jenni Lukander has been appointed president of Nokia Technologies, giving her oversight of the Finnish telco’s vast licensing arm. She will report to the company’s CEO Rajeev Suri.

Lukander was previously the head of the company’s patent business, having been appointed to that position last October. Before that she was head of licensing and before that she was global head of litigation and competition. She joined the mobile giant in 2007.

Lukander replaces Maria Varsellona, who was only appointed head of Nokia Technologies last May and combined that role with her position as Nokia Corporation’s chief legal officer. She is due to leave Nokia in October to join Swiss engineering giant ABB as its general counsel. Nassib Abou-Khalil will take over as chief legal officer.

The assignment documents were signed off on the Intel side on 2 July, just one week after the company had announced it was auctioning off 8,500 patents from its cellular and connected device portfolios. The assets changed hands on 11 July.

It is probable that this deal had been in motion for some time. Perhaps it dated back to the revelation in April that the chipmaker was shopping its smartphone modem business, or further back still. But given the timing, it could well be that the announcement of the massive patent auction increased Oppo’s motivation to close this much smaller transaction.

Big Four powerhouse Deloitte has made a major move into intellectual property with the acquisition of UK-based ClearViewIP. The deal, which closed on Friday, will see ClearView CEO Jon Calvert become a Deloitte partner and the full operation absorbed into the Deloitte IP advisory services division. This is a significant expansion of the Deloitte IP offering, which currently includes well-known figures such as John Hudson in the United States and Tim Heberden in Australia. Following Aon’s big-ticket arrival last year, today’s news is also further proof that intellectual property is becoming a mainstream business concern.

Talking exclusively to IAM about the deal, Deloitte’s lead UK and EMEA valuation partner Andrew Robinson explained that the firm has seen growing interest in intellectual property among its clients. “People are building new businesses around it, not only in tech and pharma, but in many other areas, too,” he said.

Rubio’s Huawei proposal should worry US tech and pharma companies

The Florida republican has offered an amendment to the National Defence Authorisation Act that, according to Reuters, would bar patent owners on certain lists (presumably including the Entity List on which Huawei finds itself) from seeking relief under US law with respect to their patent rights.

The proposal has gone down like a lead balloon among IP practitioners. Attorneys have not held back in their criticism of the measure, labelling it “terrible”, “not just dumb, but dangerous”, “one of the stupidest things I’ve ever heard” and so on. 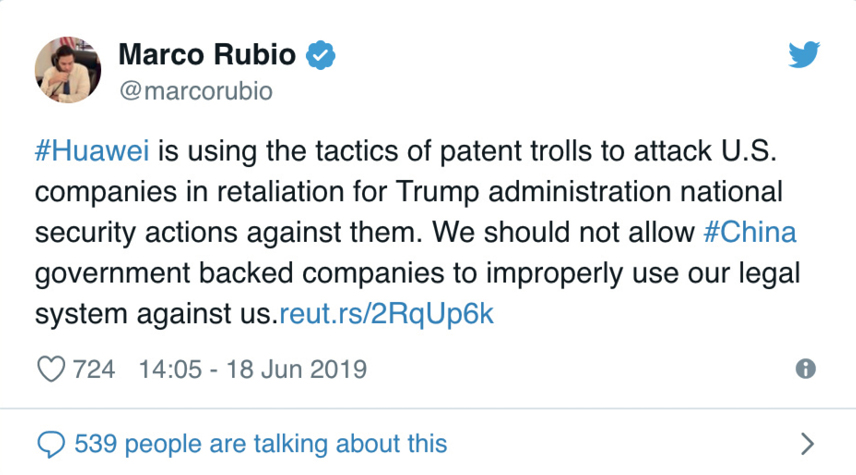 Having ruled on numerous high-profile patent cases in recent years, including Apple v Samsung and the Federal Trade Commission’s recent spat with Qualcomm, Judge Lucy Koh has been a hugely influential figure in the IP market in recent years.

That now looks set to continue with the news earlier this week that the Northern Californian judge will hear German auto supplier Continental’s lawsuit against Avanci and co-defendants Nokia, Conversant and PanOptis – all of which are part of the licensing platform focused on the Internet of Things space.

Below the radar, a changing of the guard at Apple

Apple chief IP counsel BJ Watrous has moved to a new role within the company’s legal team, IAM understands. Although the move happened late last year it has yet to be reported.

He has been replaced by Jeff Myers, who has been with the company since 2011. Watrous also joined Apple in 2011 from an in-house position at HP (before that he was in private practice at DLA Piper) and guided the iPhone maker through a period of significant change in IP terms. He arrived just as the company was emerging victorious, along with its fellow members of the Rockstar consortium, from the auction for the Nortel portfolio. The patents from the former Canadian telecoms heavyweight eventually sold for $4.5 billion and Rockstar’s success meant that Apple beat its rival Google to the highly prized assets.

The courtroom battle between IPNav founder Erich Spangenberg and Eran Zur’s Fortress IP group over what has already proved to be a very valuable patent took another twist last week when a state court in New York granted Spangenberg’s motion to dismiss for lack of jurisdiction. But that is by no means the end of this spat. Fortress has now moved to have the case heard in state court in Texas while Spangenberg continues to push to have the dispute arbitrated.

The stakes are particularly high in the case because the patent in question – No 7,177,798 – has already been the subject of a $25 million settlement with Apple. The right reads on natural language processing and appears to cover digital assistants across a range of devices, including smart speakers. That is a potentially huge and very valuable market.