Inside the Chinese patent explosion - the foreign companies that lead the way; the utility model opportunity

Following a vote by the National People’s Congress last Sunday abolishing the rule that limits the Chinese president’s number of consecutive five year terms in office to two, Xi Jinping is set to be at the country’s helm for a long time to come.

In charge since 2012, Xi has overseen China’s continued rapid transformation into a major player on the global stage; so that it is now the world’s second largest economy behind only the United States.

With an average GDP growth of 8.2% over the last 10 years, more than four times the US rate of 1.8%, China is by far the fastest growing major economy globally and represents the most exciting developing global market. That economic growth has to a large extent been driven by innovation and a corresponding rise in protection of ideas through IP rights, particularly patents.

In his latest exclusive article for IAM, Bob Stembridge, marketing communications manager at Clarivate Analytics, explores the patent explosion that has taken place in China over recent years, identifies the non-domestic businesses filing the most patent applications – as well as the sectors in which they operate – and looks at the potential quick-wins for foreign applicants seeking patent protection that are offered by the country’s under-used utility model system.

Over the last 10 years, the number of Chinese published invention patent applications has risen from 241,000 in 2008 to 1.27 million in 2017, a 5.27-fold increase.  But underlying that is a more significant trend.  Splitting out filings originating in China compared to others coming from elsewhere, we see that growth in domestic filings far outstrips those from outside China. 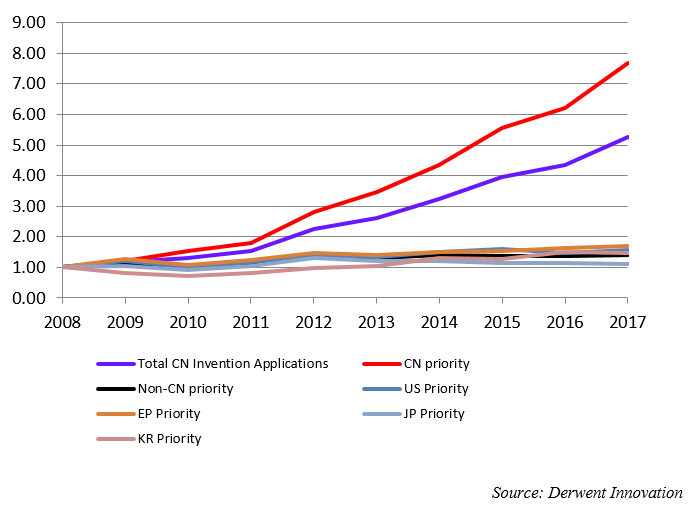 International entities are increasingly establishing footholds in the Chinese market as shown by the roster of companies seeking invention patent protection in China: 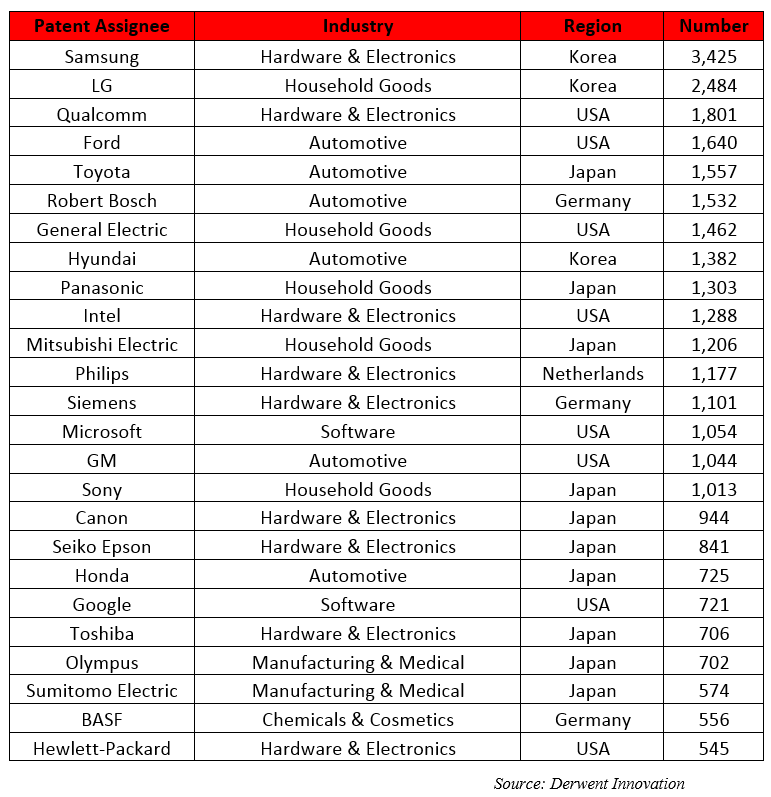 Over half (52%) of the Top 25 companies outside China filing Chinese invention patent applications are from near neighbours, Japan and Korea with US, Germany and Netherlands (at 32%, 12% and 4% respectively) completing the map.  Those companies come from a relatively narrow range of industries. Just three sectors (hardware & electronics, automotive and household goods) account for 20 of the top 25 companies on the list.

Patent protection rights in China are extended through the availability of utility models. These are lower cost, shorter term patents which have a comparatively lower level of inventive step. They are subject to preliminary examination, but do not require substantive examination so usually grant much quicker than invention patents.

Where the use of invention patents for protection of innovation by outside filers is at reasonable levels, use of utility models by foreign concerns is (as yet) almost non-existent. 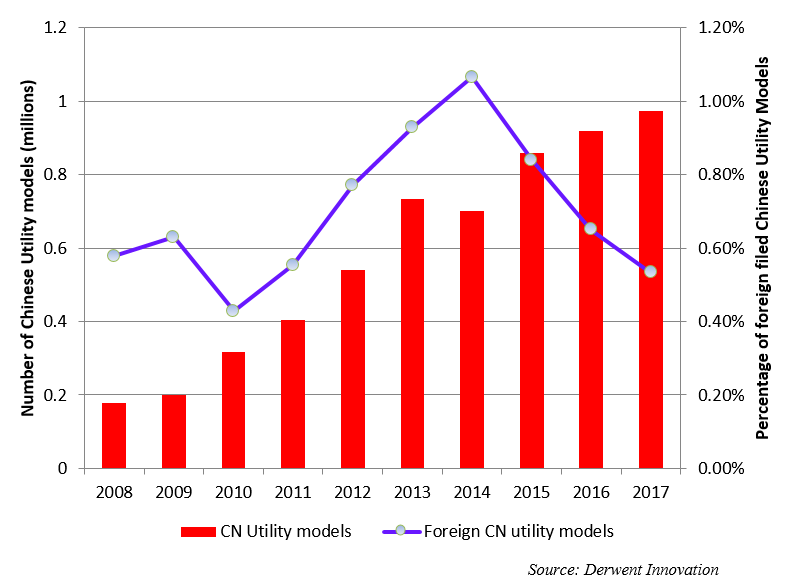 Utility model growth from 2008-2018 has been rapid and more or less constant from less than 200,000 published utility models in 2008 to just under a million in 2017. Foreign adoption of Chinese utility models was increasing up until 2014, but since then appears to have dropped off to previous levels of just less than 0.6%.  In terms of absolute numbers, this means that last year just 5,187 published Chinese utility models originated from organisations outside China.  Compared to invention patenting, the utility model system is massively under-used by foreign filers.

So why would you use dual filing? Well, since utility models generally grant quite quickly, dual filing can be used to protect a technology as a utility model before the invention patent is granted.  The period of protection can potentially be extended by many months or even years as illustrated here:

Some changes in the way Chinese dual filings are processed within a key patent information resource (DWPI) have been introduced recently which successfully identify dual filed pairings and assign them to the correct patent families within days of publication. The process addresses the challenge of ambiguities in assignment of potential dual filing matches.  For example, consider the case where five utility models and five patent applications are filed on the same day by the same applicant.  There is insufficient data to automatically link these pairings correctly – this can only be done by intellectual assessment.

As we’ve seen from the analysis of China’s economic and patenting activity here, the market shows great potential for growth. The increased need for local services has led also to the recent establishment of a local Chinese IP technical services team to support both local businesses and global concerns with business in China.

With the growing importance of China not just as a domestic market, but as a major player on the global stage, it is important to be alive to the opportunities and fully geared up to address the emerging challenges of moving into and operating within this increasingly important global market.