Earlier this year, the government of India highlighted that, for the first time under the country’s new IP regime, filings in Q1 2022 by domestic applicants outnumbered those by foreigners. In a press release by the Ministry of Commerce and Industry, it was noted that out of a total of 19,796 applications, 10,706 had been filed by Indian applicants.

Figure 1: Released by Union Ministry of Commerce and Industry in a press release dated 12 April 2022 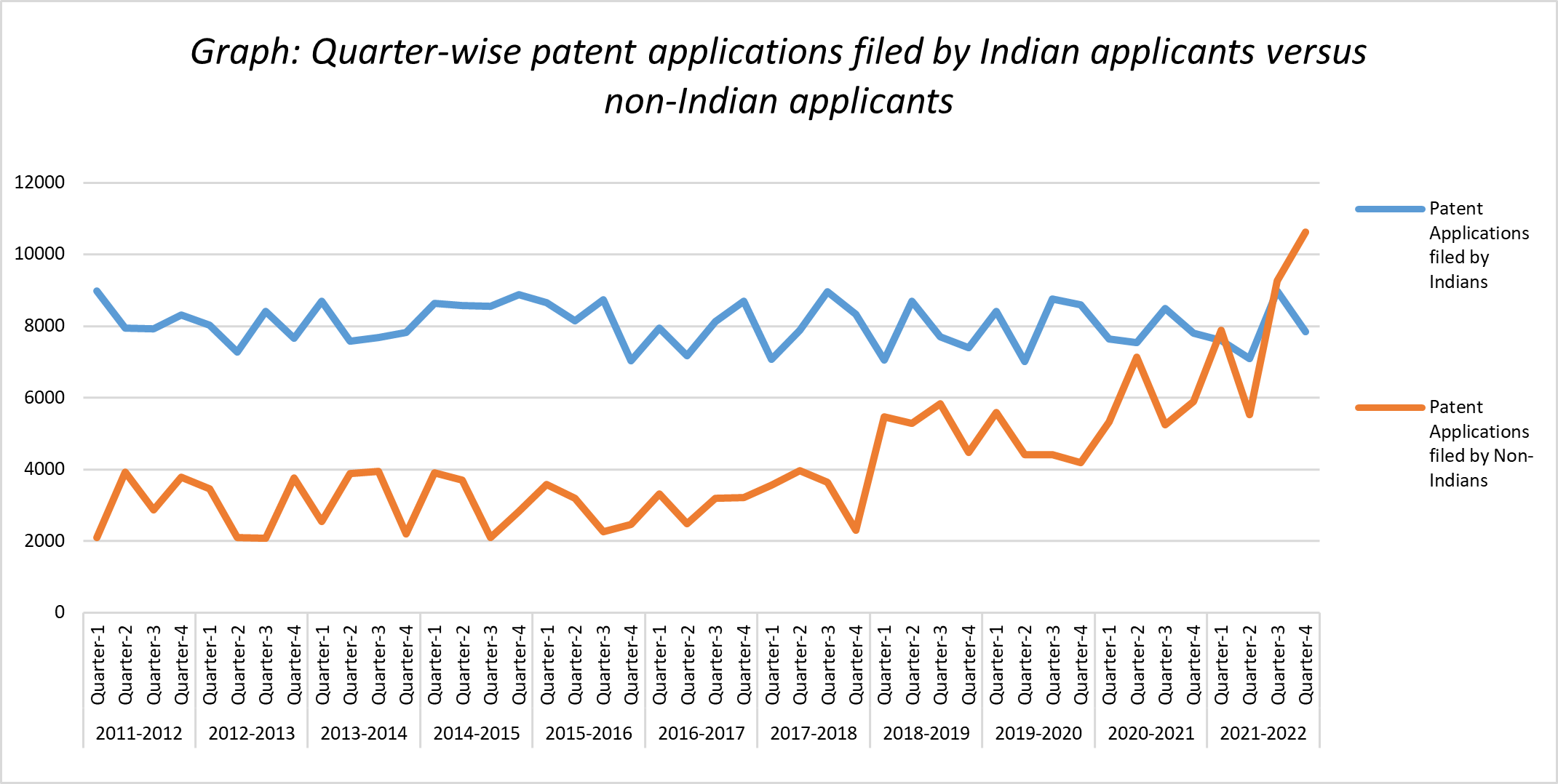 But that is not the only number worth highlighting. Low-cost handsets and affordable data – India has the lowest cost of data per gigabyte – have made India one of the highest mobile data usage countries. As can be seen in Figure 2, as per the Economic Survey 2021-2022, mobile data usage in India has grown exponentially over the years and the volume of wireless data usage has increased from 39 petabytes per month in June 2016 to 4,178 petabytes by September 2018, and more than six times to 26,470 petabytes by January 2022 (1 petabyte = 1 million gigabytes (GB)). Average wireless data usage has also rocketed from 1.5 GB in March 2017 to 14.75 GB by January 2022. 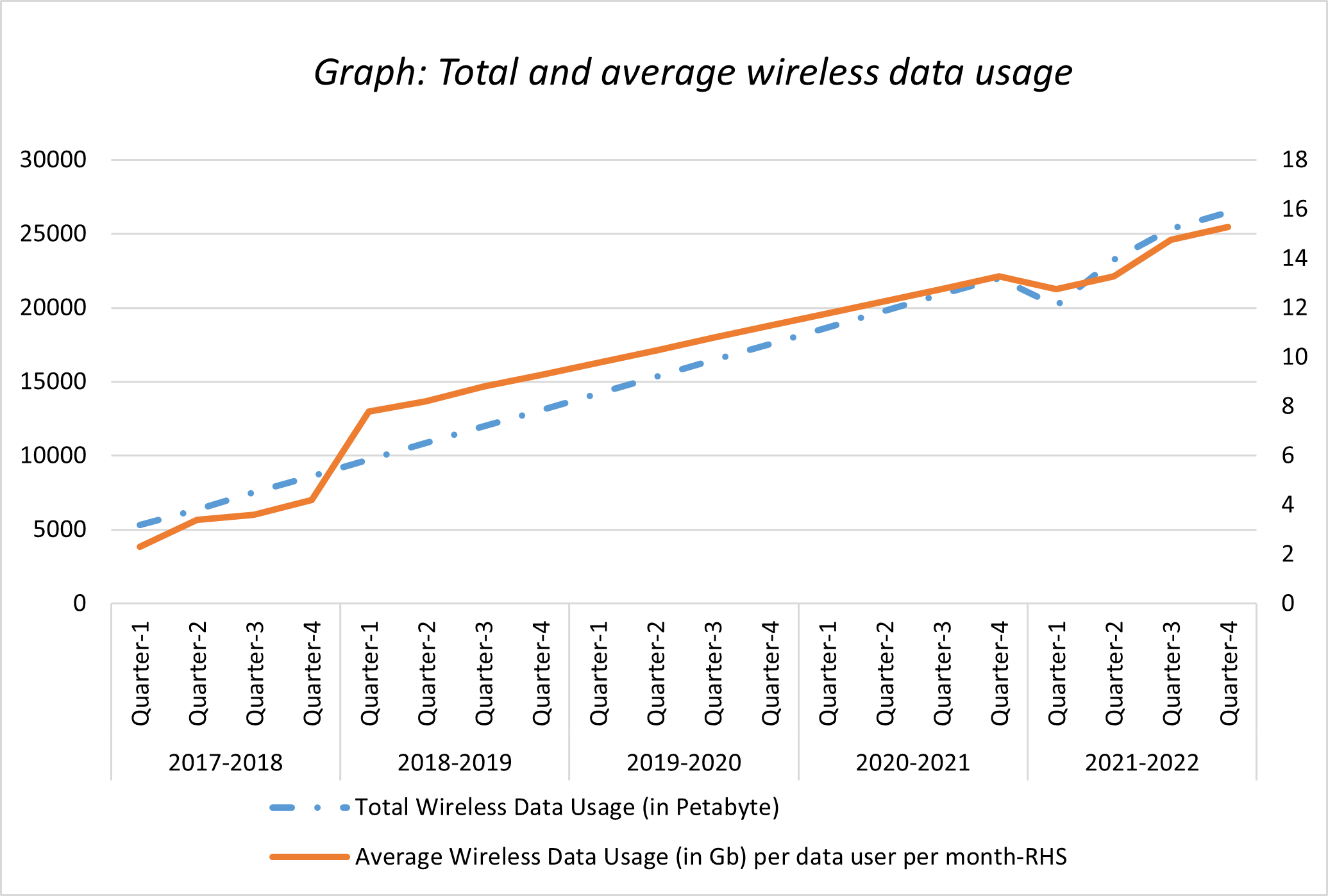 Given Indian consumers’ insatiable appetite for data, the next logical step for the country’s flourishing telecom sector would be the adoption of 5G technology to manage the growing digital economy’s data requirements. 5G or fifth generation technology is the latest iteration of cellular technology and is designed to provide reliable communications, seamless coverage, high data rates and low latency. It promises to increase efficiency in terms of energy, spectrum and networks, as well as the efficiency of other systems utilising the network. Besides providing faster and reliable access, 5G will act as an information duct to connect billions of IoT devices. In terms of adoption, 20% of the world’s population is expected to be using 5G technology by 2025. In real-world scenarios, the most important applications of 5G technology are AI and IoT, gaming, improved retail experiences, processing and analysis of Big Data. 5G promises to make significant improvements in 3D holograms, virtual reality and augmented reality, creating newer and better opportunities to connect people.

As 5G is setting off a new industrial revolution, in India and globally, IP protection is vital for companies jostling for a leadership position. While 4G technology development was mostly dominated by US and European companies, Chinese and Japanese organisations are so far leading in 5G development and claim to have the highest number of active and granted (US or European) 5G self-declared patent families from the more than 10 million patent applications filed across the globe. With the market demand for 5G applications shaping up, companies in the Indian market too are focusing on securing IP rights in India, which is reflected by an increase of patent filings in the domain.

A survey of patent applications filed in India from 2017 to 2021 in the 5G space reveals that filings were steadily increasing until 2018, after which there was a remarkable growth spurt that lasted until 2021. 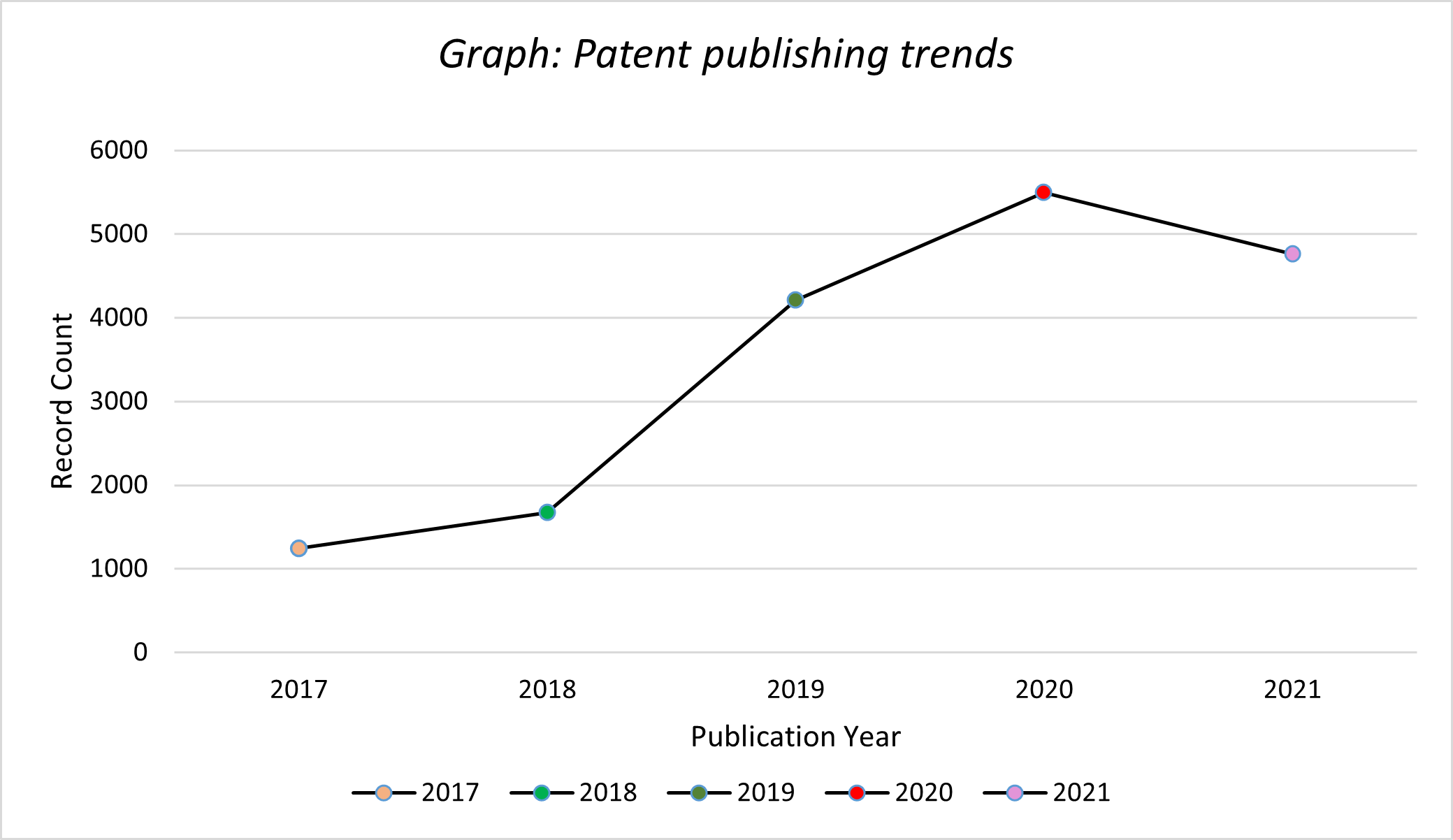 The top applicants for this time period for 5G applications were Qualcomm Incorporated and Huawei Technologies Co Ltd, followed by Telefonaktiebolaget LM, Ericsson Publ. and Samsung Electronics Co Ltd, as indicated in Figure 4. 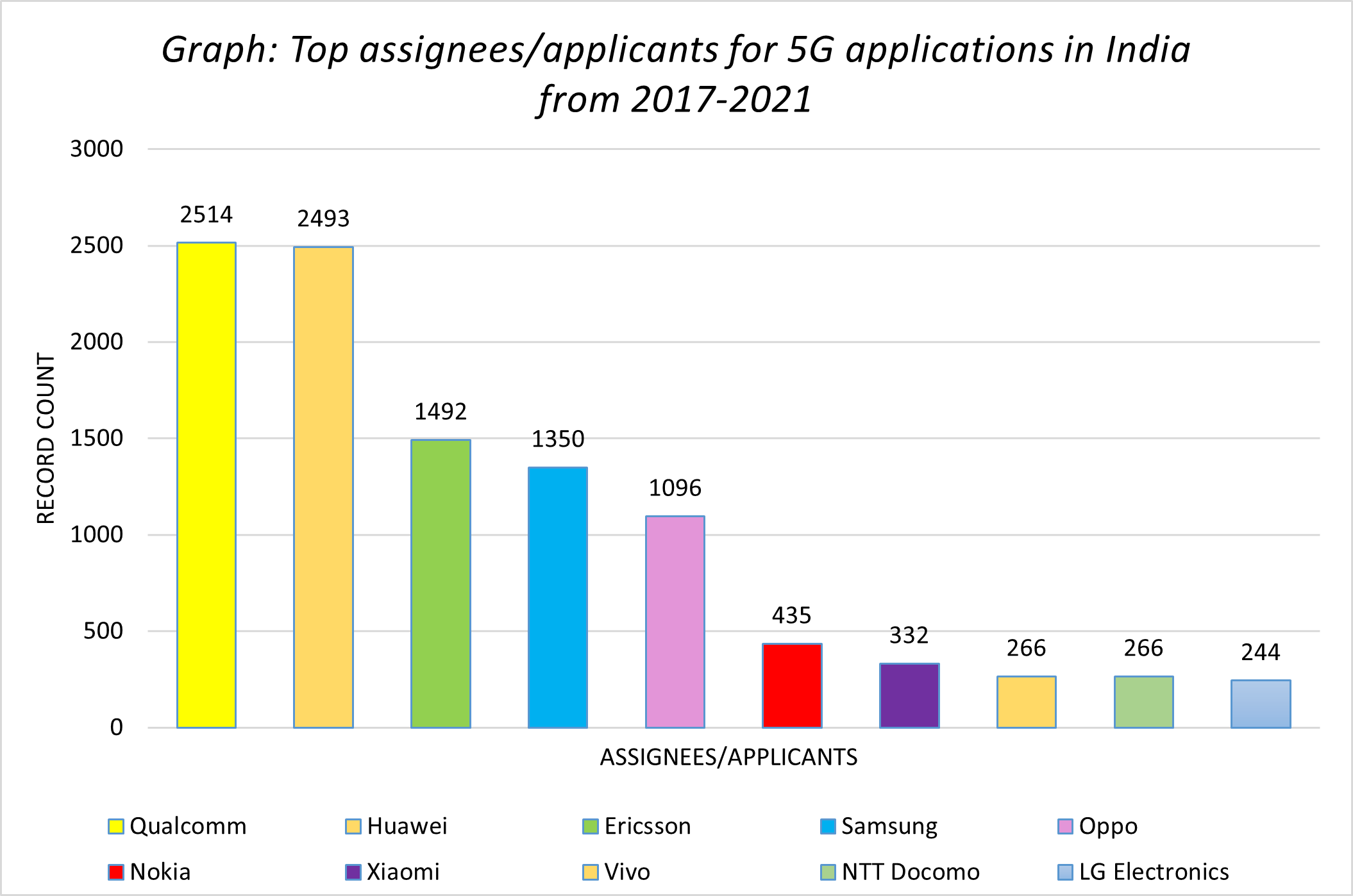 A closer look at these filings reveals that for applications filed under International Patent Classifications H04W and H04H, since 2019 the top applicants have been Qualcomm, Huawei, Ericsson, Samsung and OPPO as indicated in Figure 5, where a majority of the applications were concerned with technology related to user equipment, wireless communication, uplink, indication formation, blockchain, and the cloud, followed by channel state information, and radio frequency.

Figure 5: Top assignees/applicants vs number of patent applications in 5G technology in India from 2019 to 2022 (Derwent World Patents Index) 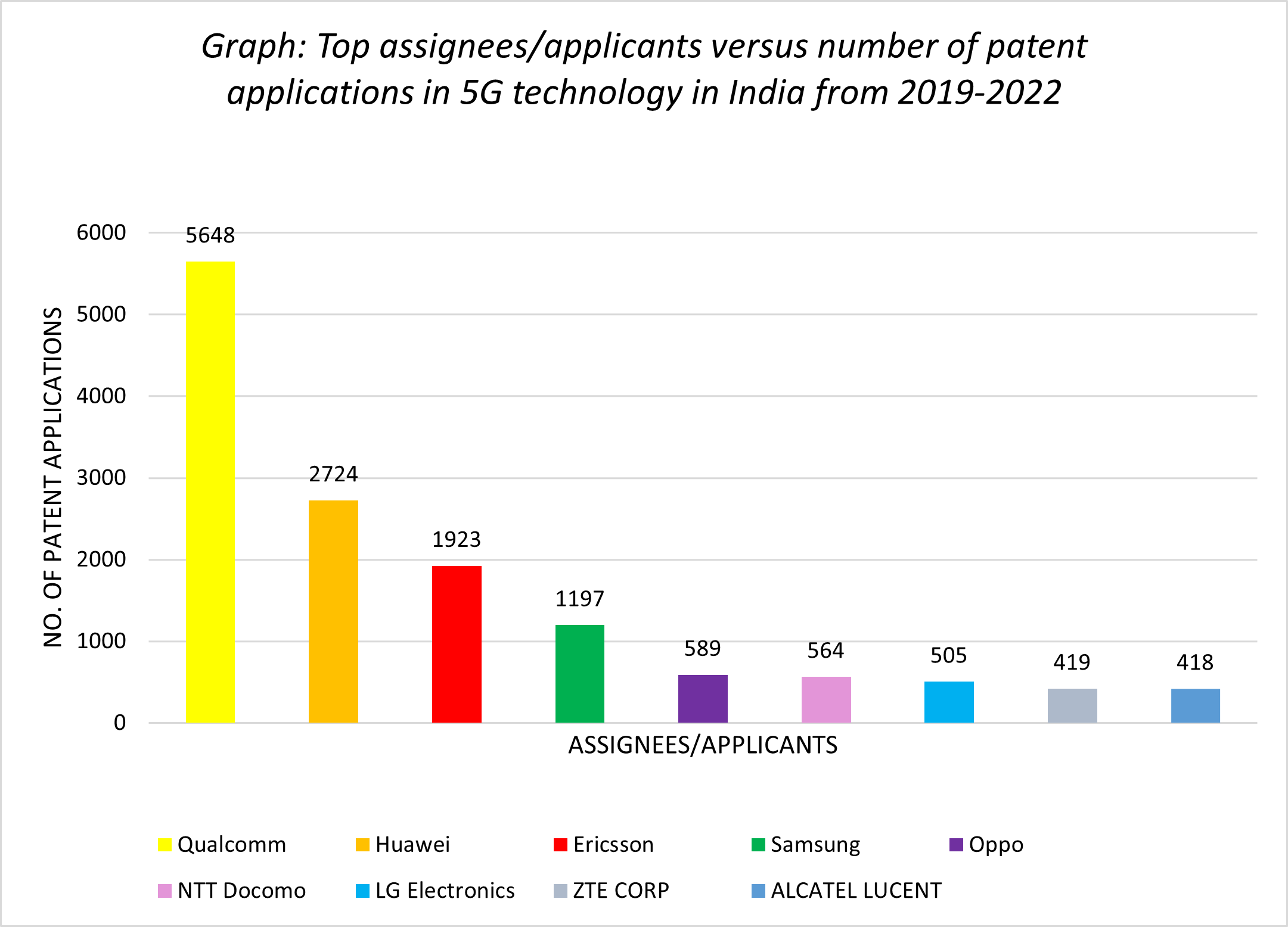 The telecom sector will continue to play a critical role in the growth of the Indian economy. Internet subscribers have increased from 302.33 million in March 2015 to 833.71 million in June 2021, with 96% having broadband connections according to the Economic Survey 2021-22. This, combined with the government’s various schemes to incentivise players in the telecom sector and boost its Digital India campaign, would make it safe to infer that India is already emerging as one of the most important jurisdictions for filing and securing patents on 5G-related technology, and we are anticipating further filings in 5G at the Indian Patent Office by the end of 2022.