If Nvidia purchases Arm it will create a processor patent powerhouse 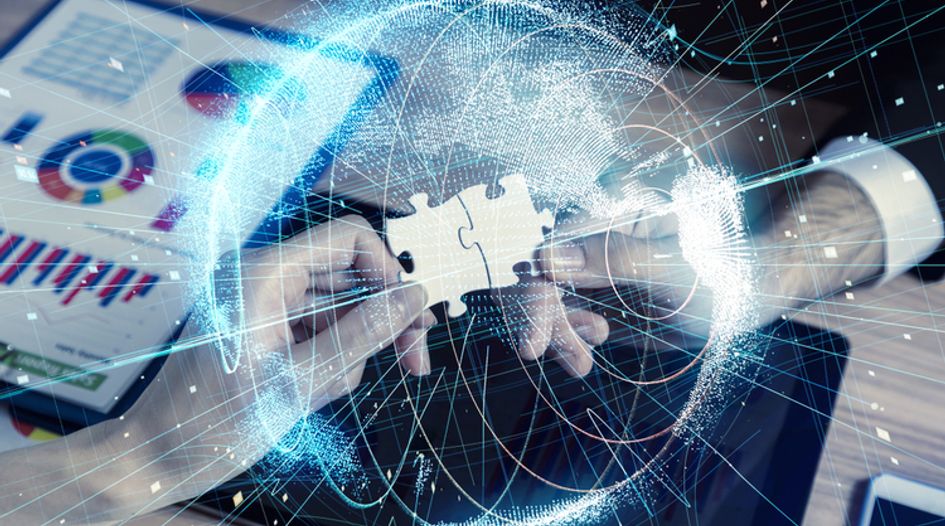 In July Bloomberg reported that Nvidia’s market cap - driven up by the high demand for graphics chips in data centres and other new-age technologies – had eclipsed Intel’s for the first time. The semiconductor market has seen significant changes in recent years. Focus has shifted to specialised chips, which possess higher performance and efficiency, to serve cloud and artificial intelligence (AI) demands. It is an area in which Nvidia is showing early strength. Now the company could further capitalise on the opportunity with rumours of a potential tie-up with Arm, which is currently wholly-owned by Japan’s SoftBank.

Nvidia is a prominent data centre player with its graphics processing unit (GPU) technology stack in the AI training market, where it faces competition from Intel, AMD and others. Beyond data centres it is also a leading player within the gaming market. The missing pieces within Nvidia’s portfolio are smartphone, wearables and internet of things (IoT) technologies.

The acquisition of Arm, should it materialise, would help Nvidia to diversify and scale up its business. It would also be the biggest-ever semiconductor deal.

Arm would be the stepping stone to fill the gaps in Nvidia’s portfolio, while also contributing to the company’s current strategy of becoming the world’s leader in data centres. The American computer game company has been busy building up its cloud ecosystem in the past year with a trail of acquisitions. In April it completed its purchase of Mellanox Technologies for $7 billion, as well as signing deals with SwiftStack and Cumulus.

Arm’s value as an acquisition target

Arm specialises in designing chips and it licenses these to manufacturers. Nvidia, for example, license an Arm design for its Tegra CPUs. Arm’s designs power over 95% of the world’s smartphone market and its IP is also critical for PCs, data centres and IoT devices. It is certainly an industry heavyweight, with the likes of Apple, Qualcomm, Huawei and Samsung as clients.

The semiconductor company’s primary business is in licensing its IP. Since it was acquired by SoftBank in 2016 it has been investing heavily in developing AI, computer vision and augmented reality technologies to create alternate revenue streams in adjacent markets. It further moved into the cloud and software markets via the acquisition of Treasure Data in 2018 and also created a presence in autonomous driving through a collaboration with Toyota.

Nvidia and Arm together would create a processor powerhouse

Nvidia has a lot to gain from Arm. It stands to benefit from adding the company’s licensing and royalty business to its portfolio. Nvidia’s Tegra CPUs generated about 13% of its revenue in 2019 and the deal could bump its margins higher as it will no longer have to pay royalties. Nvidia also licenses Arm’s core for its autonomous driving which, post-acquisition, would give it direct access to – and bolster capabilities in – this key business segment.

The tie-up would also help Nvidia make further inroads beyond GPU backed data centres, an area in which Intel is the current leader. Last year Nvidia extended its support to Arm-based processors with a new reference architecture and ecosystem with GPU acceleration support. It also made its CUDA-X libraries, GPU-accelerated AI frameworks and software development kits (SDKs) available to Arm developers such as Ampere, Fujitsu and Marvell. This investment would give Nvidia more choice, an open platform and energy efficient systems for its end customers.

The graph below shows that Arm’s patent strength in memory management and low power utilisation coupled with Nvidia’s leadership in image processing and visual computing would create a processor powerhouse.

The IP portfolios complement each other (CPU and GPU) 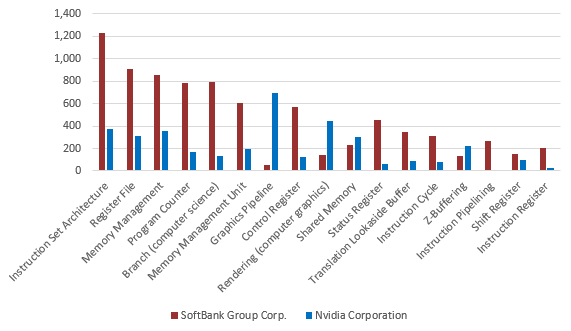 As more processes move to the cloud/edge computing, data analysis and the use of AI and machine learning (ML) are increasingly being used for real-time analysis. As such, many companies have turned their focus to AI and ML for data centres. Arm and Nvidia are not absent from this shift. When Arm came under SoftBank’s wing there was an uptick in the filing of patents within the AI and ML domain. Nvidia started filing patents in these areas recently and while its output is greater than Arm’s it still lags behind other industry players (see graphs below). 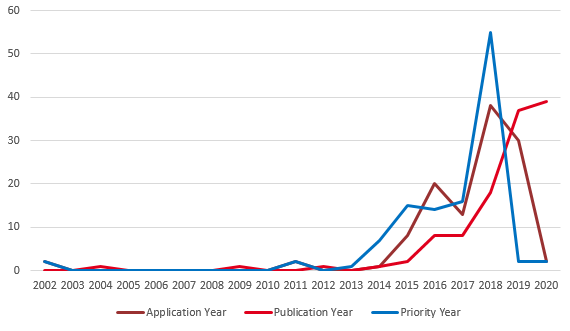 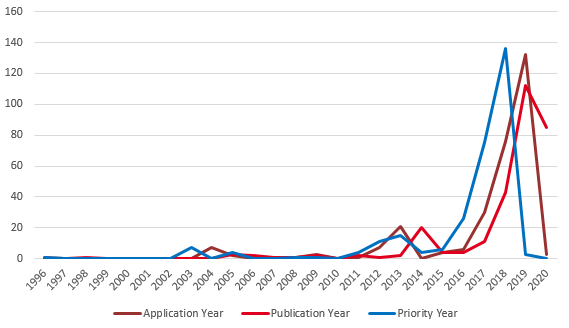 Key AI/ML areas where Nvidia and Arm are filing patents 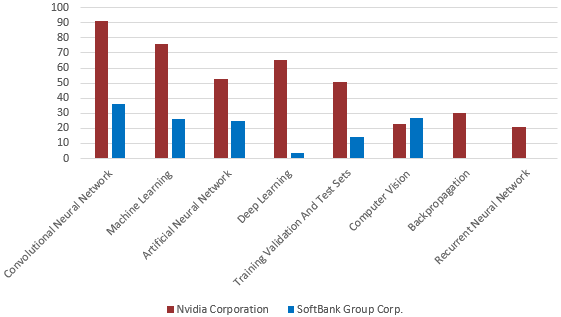 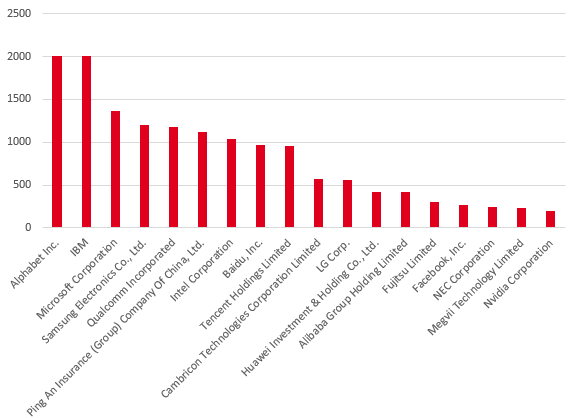 In terms of patent volume, Nvidia is not the top dog. But, with Arm on board it would have access to all the key players in the ecosystem since the company licenses its IP to nearly everyone in this domain (including Qualcomm, Samsung, TSMC, Apple, Huawei and Fujitsu).

Arm’s position in the market makes its IP licensing revenue highly lucrative – and highly coveted. In the past, Nvidia has tried to create its own licensing model for its chips, but it was not very successful. An existing model from Arm would mean that it could include its own portfolio, as well as go ahead and create a new generation of processors to compete with others, while also licensing the technologies that it creates through the existing ecosystem.

The deal would be bound to ruffle some feathers. The competition would intensify if Nvidia had direct control over the IP that companies across the ecosystem require - especially with major players like Qualcomm, Apple, Huawei, NXP, and ST Micro all having licensed from Arm over the years.

This may trigger competitors to seek an alternative, such as RISC-V, an open source organisation which assists in developing IP except for the cores (the instructions and ecosystem). RISC-V has been making headway in the industry and is leveraged by large players including Nvidia.

This option seems likely unless Nvidia can convince the players in the ecosystem that it can emulate the Qualcomm business model. In this scenario it would have a separate technology licensing business where it licenses its technology to its competitors in the very market in which it competes.

Other things that could get in the way of a deal are geopolitical issues and regulatory hurdles. The latter would take a few years to clear. The ongoing tensions between the US and China also has further potential to stall an agreement, as it did previously with the Qualcomm-NXP deal.

While it might be a great deal for Nvidia, the acquisition of Arm would not be smooth sailing. SoftBank is experiencing tough times owing to a string of investments that have negatively impacted profits (ie, WeWork, Uber, OneWeb). A deal of such scale is likely to help SoftBank secure significant cash, more than what it invested in Arm in 2016 ($32 billion).

Given the current dicey grounds, it has two other options to look at apart from a complete sale to Nvidia:

It’s too early to predict which way this deal is going to swing. Even if SoftBank does make a complete sale to Nvidia - or any other player – it is going to meet significant regulatory hurdles and geopolitical standoffs. But should it materialise, it will be a critical moment in Nvidia’s patent history.