How LONDON MALL can become a registered trademark in Russia

While a new regime of geographical indications will be introduced in Russia as a form of intellectual property on 27 July 2020, a trademark registration will likely remain one of the most popular ways to obtain exclusive rights to geographically themed designations. The extensive practice of the Russian IP Court with regard to this category of trademarks was recently summarised in The Review of Practice of the Russian Intellectual Property Court Related to Use of Geographical Names in the Process of Their Registration as Trademarks, adopted by the Resolution of the presidium of the IP Court of 12 September 2019 (SP-21/31).

Russian law does not prohibit the registration of trademarks incorporating geographical names. However, their registration and protection can be cumbersome.

In addition to the Civil Code and internal guidance developed by the Russia Patent and Trademark Office (Rospatent), the IP Court has established the following vital criteria for the examination of geographically themed trademarks in its Review.

If a geographical name is known to consumers, but not as the place of manufacture of the applied-for goods/services, it can still be registered as a trademark.

Rospatent refused to grant protection for the LONDON MALL mark for services in Classes 35 to 42 on the grounds of it being false and misleading with regard to the nature of services and their provider. Indeed, most Russian consumers know the dominant word element ‘LONDON’ as the capital of the United Kingdom. Contrary to Rospatent’s conclusion, this does not mean that consumers will always perceive London as the location of the service provider.

Overruling the decision, the IP Court noted that Rospatent did not provide any evidence of London’s wide reputation for providing services in Classes 35 to 42. Based on common knowledge, a consumer is unlikely to believe that the service provider, being registered in Cyprus, is located in London, and would be more likely to accept LONDON MALL as a fanciful mark.

The court also rejected the conclusion that the historical meaning of the word ‘mall’ as the street leading from Trafalgar Square to Buckingham Palace would reinforce the false association with London. The historical meaning of the word may be known to a limited audience, but not to an average Russian consumer who relies on general facts. Here, LONDON MALL would most likely be perceived in its common meaning of ‘a London alley for walking’, used to characterise the spirit of the shopping centre.

Consumer knowledge of the location

The average Russian consumer of a labelled product must know of the location.

In addition to the mere existence of a geographical name, it is important to establish whether it is known to the target group of consumers in the country of registration and whether they can perceive it as the place of production of a particular product.

This decision was made by the presidium of the IP Court in the ARAGATS case. Mountain Aragats is the highest peak in Armenia. However, due to the territorial effect of trademark protection, the name must be known to the consumers in Russia. As the case materials did not confirm this knowledge, Rospatent’s decision was overruled.

Geographical designation should be known to targeted consumers

When examining the application for registration of the mark BERGLAND, Rospatent proceeded from its translation from German to Russian as a ‘mountain country/mountain land’. Austria is known to Russian consumers for its ski resorts; however, the name of the Austrian commune Bergland is not that familiar. Rospatent concluded that the applied-for mark reproduces the name of the commune. As the trademark owner is a Russian company, the registration of this mark would be misleading in respect to the source of origin of goods and their manufacturer.

The IP Court did not support Rospatent, emphasising that it is important to establish whether consumers know the mark as a name of the geographical location.

If such information is unknown or inaccessible to the consumer at the time of filing, then it is impossible to conclude that the applied-for mark is perceived as the location of the place of production or a location of the manufacturer.

Location of the rights holder

The discrepancy between the location of the right holder and the geographical name does not in itself result in consumer confusion about the product or its manufacturer.

Rospatent refused to register GOLD OF GEORGIA for “alcoholic beverages produced in Georgia” on the grounds that the applicant, being registered in Russia, did not submit any evidence of its activity or supply contracts in Georgia.

The IP Court overturned the decision, indicating that the applicant’s lack of activity in the production of alcoholic beverages in Georgia alone does not make the mark misleading. Moreover, the law dictates that the issue of falsity or deceptiveness is resolved regardless of the documents submitted by the applicant for registration.

Upholding this ruling, the presidium of the IP Court indicated that the mark can be used to individualise goods produced in Georgia not only by the rights holder, but also by its order. The legislation does not prohibit the use of foreign country names in marks.

Consumer associations of a geographical name with certain goods do not imply the same associations with other goods.

Rospatent denied the registration of the ALTAYSKOYE (‘Алтайское’) mark in Class 29. Since the Altai region of Russia is known for its food products, the applied-for mark was found to be descriptive with regard to the place of production or the location of the manufacturer. However, the applicant successfully appealed in relation to butters. The IP Court and its presidium considered the above conclusion insufficient. Given the existing variety of food products and various conditions for their production, one region cannot be known for all types of foodstuffs. Although the average Russian consumer knows Altai for its wheat, honey and cheese, it cannot be considered equally known for the production of butter. 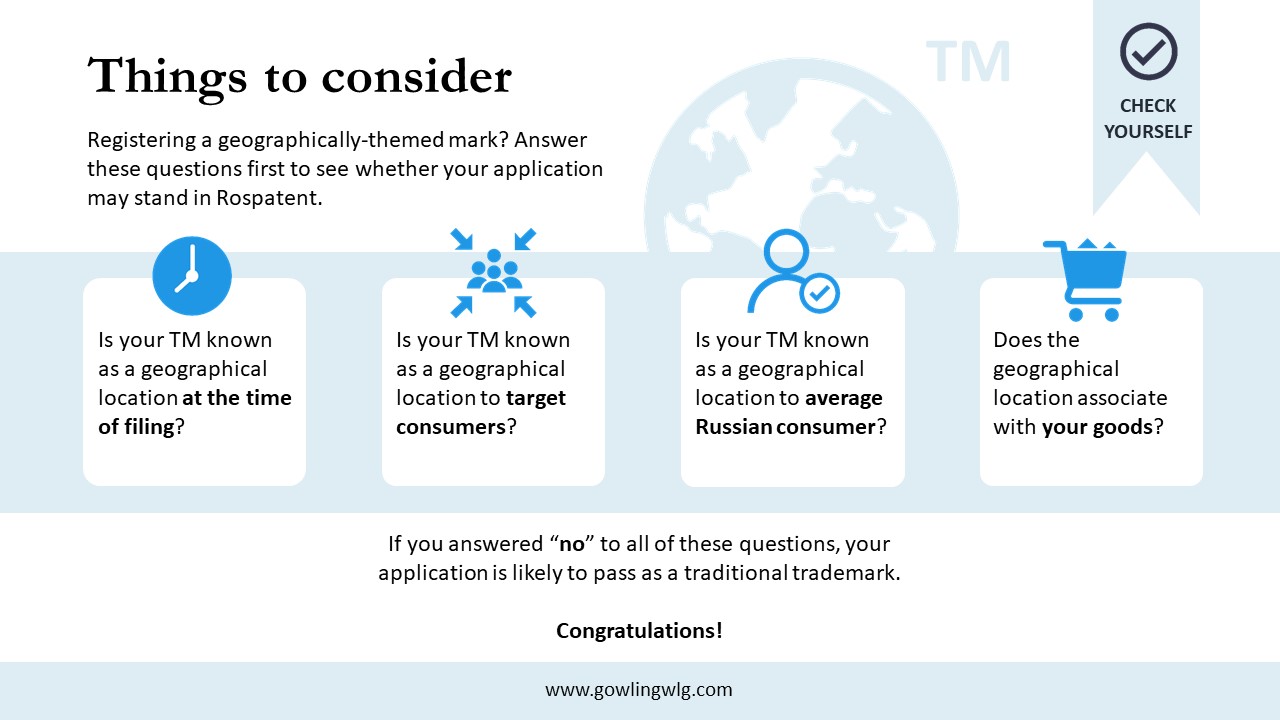