In response to the covid-19 global pandemic, universities, national laboratories, hospitals and pharmaceutical companies have combined forces in an unprecedented effort to fight the virus. This has resulted in a changing patent landscape, which requires new approaches to portfolio management.

To find out which entities are successfully managing their IP portfolios with regard to addressing viral epidemics, Global Prior Art performed a landscape analysis of patents filed for two recent outbreaks – SARS-CoV (2003) and MERS-CoV (2015). Close to 3,500 relevant patent families were identified, which were further analysed by the viral strain claimed (SARS-CoV, MERS-CoV, and/or the family at large), the focus of filing (eg, diagnostic, med device, vaccine and treatment) and the assignee (eg, industry, government, non-profit research lab, individual and inventors).  The results show that entities are leveraging advances in drugs developed in previous outbreaks to address the covid-19 pandemic. More than 179 COVID-19 vaccine candidates are under development, with around 56 of these in the human trial phase. Several key anti-viral treatment technologies for covid-19 that are either approved by the Food and Drug Administration or in clinical trial (ie, Remdesivir, Favipirar) can be traced to patents filed in the wake of prior epidemics. Further, recent advances in structural biology (ie, cyro-electron microscopy) and computer-assisted drug design, as well as high-throughput screening have accelerated the effort to identify and repurpose promising drugs – a core thrust of anti-viral IP development in the covid-19 era.

A significant percentage of the treatment-focused patents for both SARS-CoV and MERS-CoV are broad in scope (ie, encompassing the entire viral family) and/or utilise repurposed compounds. This reflects the unpredictable nature of communicative illness and the historically long timeline for new drug development (usually more than 10 years). The landscape analysis yields insight into the evolution of the management of intellectual property surrounding drugs targeting coronaviruses over the past 10 to 15 years, the holders of key patents, and the rights holders’ ability to maximise on these previous advances to address the covid-19 pandemic.

While vaccine tech companies may be at the forefront of the public’s mind, vaccine tech patents do not comprise the majority of intellectual property directed at SARS-CoV and MERS-CoV.

Figure 1. Focus of covid-19 patent filings published prior to July 2020 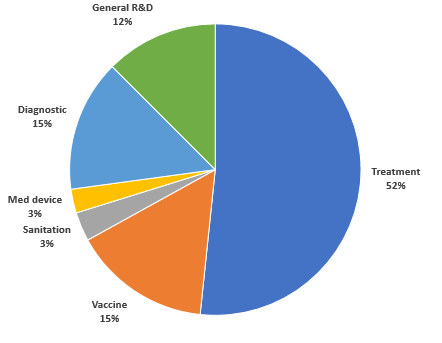 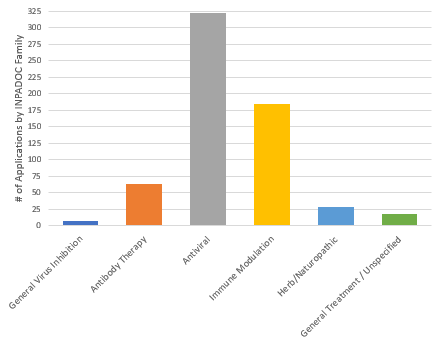 Treatment is at the forefront, with anti-viral drugs being the primary focus of many patents. Anti-viral drugs, often small molecules, target the means by which a virus enters a cell and replicates. Dependent on the mechanism of action, these compounds have potential to be broadly applied to a number of infectious organisms. Indeed, a significant numbers patents for SARS-CoV and MERS-CoV claimed repurposed compounds, including Hydroxychloroquine, Remdesivir, Favipiravir, Lopinavir and Ritonavir.

With regard to government and non-profit organisations handling patent portfolios, it was found that these entities had a large stake in antiviral patents for SARS-CoV in particular (NIH/US government the largest IP holder), but not the majority. Industry occupies this position, although no one company has an overwhelming number of INPADOC families to its name. There are over 90 distinct industry assignees, pulling from both large pharmaceutical and small biotech companies. It is suspected that the often unpredictable nature of epidemics may be a contributing factor. 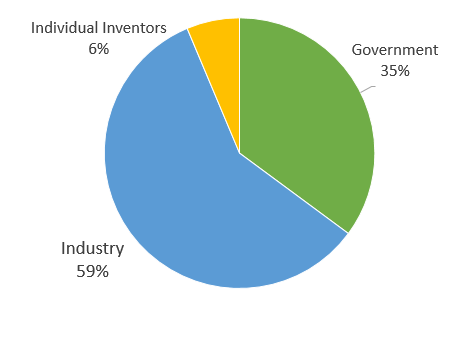 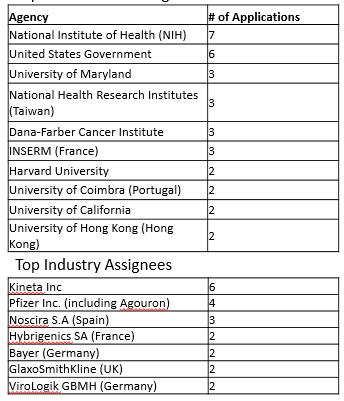 Further analysis of portfolio management for SARS-CoV shows that a large number of players initiated programmes to address the unmet medical need. But in the case of SARS-CoV the epidemic waned and ultimately no human cases were reported past 2004. This makes the transition from pre-clinical to clinical drug testing difficult (lack of patients) and is why no entity has a sizable SARS-CoV anti-viral IP portfolio. Further, more than 60% of the SARS-CoV specific antiviral patents were found to be abandoned or deemed to be withdrawn. This highlights the risky nature of investment in drug development for an emerging disease.

Covid-19 has likewise seen a large number of players publicly declare that they are entering the fray. Should the virus become endemic we would expect intellectual property to eventually coalesce around a handful of these filers, with a number commercially successful drugs to their name (ie, similar to Gilead for HIV and hepatitis). Alternatively, should covid-19 be eradicated, it is likely to result in a patent landscape closer to that of SARS-CoV. Either way it is clear that knowledge of an existing patent portfolio and canny management of these assets are key to staying ahead.