The rising number of companies in IAM’s Asia IP Elite group is testament to Asia’s growing interest in IP value creation. All were honoured at a special dinner during IPBC Asia in Tokyo, with a select few receiving awards for their achievements over the past year

Since 2012, IAM’s Asia-based editorial team has compiled an annual list of the top patent-owning organisations across Asia-Pacific – that is, the entities across the region who most effectively use intellectual property to create significant value, in whatever form that may take. As we have gained more and more insight into the patent market in this region, the Asia IP Elite has swelled to include 64 corporations and public sector research institutions, which we honour each year at the IPBC Asia Gala Dinner.

This year in Tokyo, we once again presented annual industry awards as part of the Gala Dinner programme. These are designed to recognise the members of the Asia IP Elite (and others) who have contributed over the last year to their organisations and who are worthy of special recognition. The winners are chosen by the IAM editorial team after extensive engagement with the industry based on how IP strategies have unfolded in the last 12 months – looking at licensing, transactions, litigation, technology agreements, M&A deals, IP initiatives and many other factors. Congratulations to all of the nominees and winners.

Toyota continues to lead not just Japan and Asia, but the global auto industry when it comes to obtaining patents. However, its activities over the past year show that its defensive strategy is about much more than just filing applications. The company has generated more inter partes reviews petitions than any other car maker – its latest salvo connected to infringement litigation with Intellectual Ventures. Toyota is also at the forefront of industry alliances such as the Open Invention Network (OIN). In 2016 it became OIN’s eighth board member, committing to helping fund the organisation’s patent acquisitions and other efforts. As convergence of automotive and communications technologies continues, Toyota has embarked on an alliance with Japanese telecom KDDI to develop its own connected car platform. However, the Japanese company has also shown that it will take a pragmatic approach to licensing in the Internet of Things (IoT) era. One of the earliest adopters of Microsoft’s Azure IP Advantage programme, Toyota also became the first licensee as part of Microsoft’s new auto licensing platform.

LG Chem has been adding significantly to its patent portfolio recently as it looks to diversify its business into new areas. Lithium ion batteries are a crucial component of the company’s offering and account for the largest share of its patent holdings. However, the second largest chunk of the portfolio – numbering over 5,000 rights – is dedicated to so-called ‘new growth engines’. The latest data published by IAM showed the company’s US patent count increasing at a compound annual growth rate of over 20% – qualifying it as one of the 20 fastest-growing large businesses. In the last year, LG Chem showed its determination to protect these rights, filing what looks to be its first patent litigation in a US court. The suit targets a Chinese competitor in the market for lithium ion batteries, which underpin the critical growth market for electric vehicles. LG Chem also transacted patents in 2017, sending a portfolio of six US rights to Chinese company Shengyi Technology. 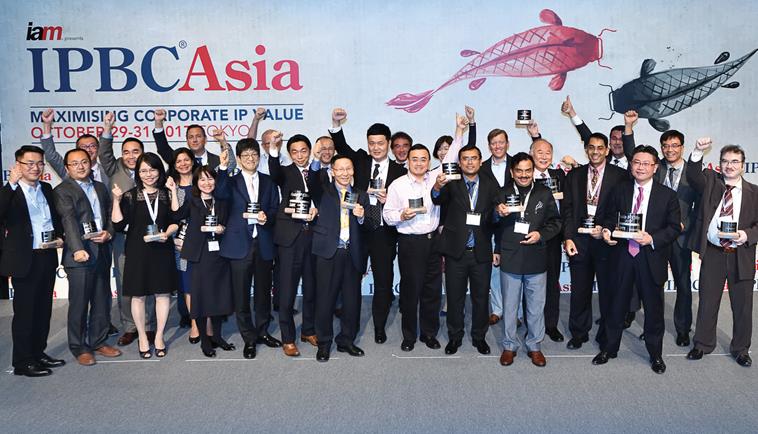 Once again over the last 12 months, Panasonic demonstrated that it has one of the top transactions teams in Asia, executing a range of deals that made waves in the global patent market. The volume of work it completed is all the more impressive for the fact that it consolidated most IP functions in an in-house IP management subsidiary just a few years ago. The last year saw the company sell patent portfolios to major operating companies including Samsung Electronics, SK Hynix and GS Yuasa. It also sold assets to Intellectual Ventures and transferred patents to Conversant, Quarterhill and Optis. On top of all that, this year IP Bridge earned its first public settlement with semiconductor company Broadcom after asserting Panasonic and NEC patents against it in US court, highlighting Panasonic’s instrumental role in the development of Japan’s sovereign patent fund.

Healthcare and Biotechnology Team of the Year – Takeda (South Korea)

One of Asia’s top pharmaceutical innovators, Takeda has tackled numerous new initiatives in both the business and IP realms in recent months. In August it announced a partnership with Samsung Bioepis to develop new biologic drugs – representing the Korean company’s first effort beyond biosimilars. In the litigation arena, Takeda launched US lawsuits against two generic manufacturers – Indoco Remedies and Torrent Pharmaceuticals – in 2017, both aiming to protect a key anti-diabetes drug. In 2016, the company also rolled out a bold “Access to Medicines” plan, pledging either not to file patents or else not to enforce them in the United Nations-defined ‘least developed countries’.

Internet and Software Team of the Year – Alibaba (China)

Alibaba has one of the fastest-growing patent portfolios among internet companies, thanks to a concerted effort to develop more patents internally since its 2015 initial public offering. In 2016, the company ranked 34th in terms of Patent Cooperation Treaty filings, publishing 448 applications. Branching beyond its roots as an e-commerce and cloud service provider, the Hangzhou-based firm has signalled its intent to carry out much more technology R&D in the future – it plans to invest more than $15 billion over the next three years to set up labs around the world. Artificial intelligence is one major research interest and the company has already applied some of its finding to the IP department, using advanced analytics to guide its IP portfolio strategy.

Mobile and Telecommunications Team of the Year – Xiaomi (China)

Xiaomi continued to be an active player in the transactions market this year – in 2017 we learned that it bought patent portfolios from Japanese companies Casio and Denso. The Beijing-based device maker also picked up an unknown number of patent rights as part of its licence agreement with Nokia. As a top smartphone vendor in high-volume markets including China and India, Xiaomi has been a leading voice on questions of fair, reasonable and non-discriminatory terms (FRAND) licensing. The company became one of the first to take advantage of Via Licensing’s new region-based AAC royalty rate structure, praising the model as a fair and efficient way to address China’s unique circumstances.

This year has been a significant one for Commonwealth Scientific and Industrial Research Organisation (CSIRO). The organisation’s sustained effort to enforce a key foundational patent applying to wireless local area networking technology finally came to an end as the last active US case in the campaign – one against Cisco – was dismissed in May. In all, the organisation earned well over $400 million in income from the patent. Yet just a few months later, in September, another technology had CSIRO defending its patent rights once again. A venture with Australian company Nuseed to commercialise canola containing DHA oil resulted in licensing negotiations with BASF, which is working on a similar project. No deal was struck and now CSIRO is defending 12 patents underlying that technology from a declaratory judgment action for invalidity. It will be a new challenge in an exciting sector for the experienced IP team at CSIRO.

Through an extensive research process that is both quantitative and qualitative, the IAM editorial team has identified 64 organisations as belonging to the Asia IP Elite.

The research process included interviews with senior executives, brokers, investors, legal professionals and other IP experts from the Asia-Pacific region and beyond in order to gauge their views on which entities should be considered for inclusion. The IAM team also scrutinised multiple data points such as filing, transaction and litigation data, and other publicly available information.

In identifying the Asia IP Elite, the focus was not on the IP assets that entities own but rather on how those assets are used and integrated into overall business strategy. Each Asia IP Elite member demonstrates excellence in IP value creation and adheres to the following criteria:

The full list of Asia IP Elite companies for 2017 is below. 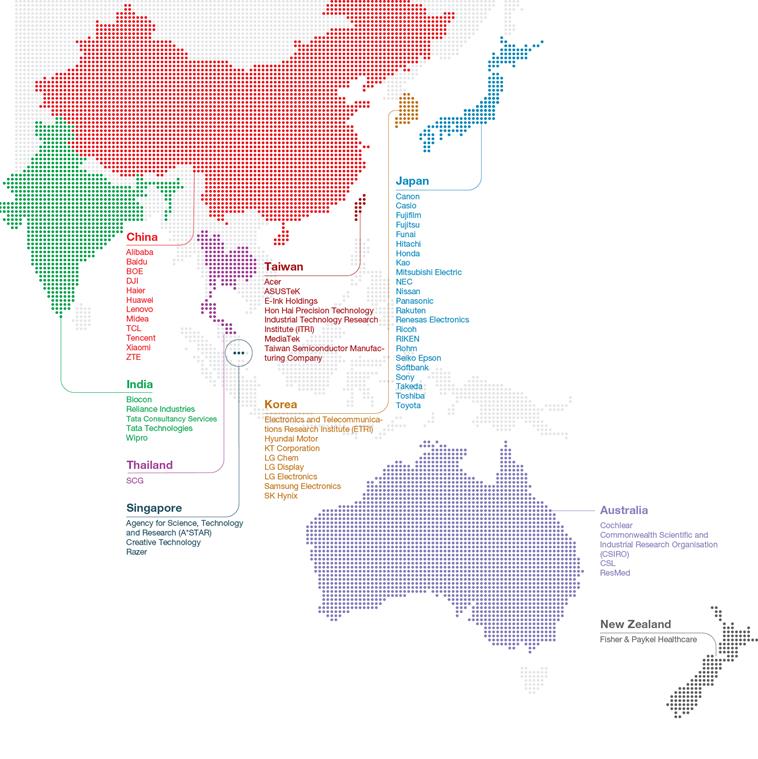 The team from SCG face the post-dinner paparazzi posse

Although its patent portfolio is not quite as large of those of some of its longer-established competitors, the IP team at Mediatek has demonstrated a creative and pragmatic approach to protecting the company’s business and generating IP-based revenue. Faced with a patent lawsuit in the United States from chipmaker Broadcom, Mediatek countered with suits of its own before Chinese courts. A couple of months later, the two parties came to a settlement. Aside from defensive purposes, the chipmaker has also explored new ways to generate financial returns from its patents, joining Via Licensing’s long-term evolution (LTE) patent pool earlier this year.

The $1.1 billion cooperation agreement concluded by HTC and Google in September put to rest long-running rumours that the search giant would acquire the Taiwanese company’s smartphone division wholesale. Although it was far from a straightforward patent deal, know-how and intangible assets were front and centre of the transaction. While a 2,000-strong team of engineers became Google employees, HTC retained all of its IP rights, including its valuable brands. The two sides renewed their non-exclusive IP licence at the same time. The pair have long been allies in various IP-related initiatives and this deal puts them closer than ever.

A standard bearer for intellectual property in China, Huawei is one of the world’s most important players in both the licensing and transaction markets. This year it was once again at the centre of major global FRAND dispute, as the defendant in Unwired Planet, and it now has another UK-based standard-essential patent (SEP) dispute with Conversant on its hands. However, Huawei is pursuing its own patent enforcement drive, with US cases against T-Mobile and Samsung. Against Samsung, the Chinese company is litigating also in China, where it has notched up a few key victories already. The telecoms giant has made its influence felt on the transactions market too as it continues to add to its portfolio by picking up new assets from companies including Hitachi and AT&T this year.

Shigeharu Yoshii has led IP Bridge since its foundation and in 2017 its IP licensing programme began to pick up serious momentum. The Japanese sovereign patent fund announced a settlement with chipmaker Broadcom after bringing cases against it in both the United States and China. It also reached deals without resorting to litigation with ARM and a number of unidentified corporates. The fund has continued to add rights to its two major portfolios – semiconductors and wireless SEPs – through transfers from key Japanese corporates. IP Bridge’s other main venture is its innovation business, which recently signed key deals in Southeast Asia as it seeks opportunities to commercialise Japanese IP assets. Yoshii’s vision for IP Bridge was always ambitious but his business-savvy approach and inspirational leadership are now promising to generate meaningful returns and ensure that the firm gets noticed around the world.

Jacob Schindler is the Asia-Pacific editor and Bing Zhao is the China editor of IAM, based in Hong Kong