Hidden dangers: how to tackle invalidity challenges in China

The validity stage is the hardest part of most patent conflicts in China, but patent owners that are prepared for – and familiar with – key Patent Re-examination Board rules can still succeed

Chinese patent disputes are garnering more media coverage than ever before, with civil infringement battles between global giants such as Qualcomm v Apple making headlines around the world. But while eye-popping damage claims or globally significant judgments relating to SEPs or FRAND licensing make for compelling stories, the media – including the IP media – is still not giving enough attention to the other side of the fight: patent invalidation.

This means that while there is a certain degree of predictability from the court in a civil action, there is much more uncertainty on the validity side. In many high-profile cases, it has been validity decisions rather than court-issued civil infringement judgments that have dictated the final result of disputes.

Consequently, patent owners should prepare carefully before initiating a patent fight in China, taking into account strategic considerations and investing in extra validity reviews. They should also consider invoking the detailed rules on substantive validity concepts recently issued by the former Patent Re-examination Board (PRB) to support their position. 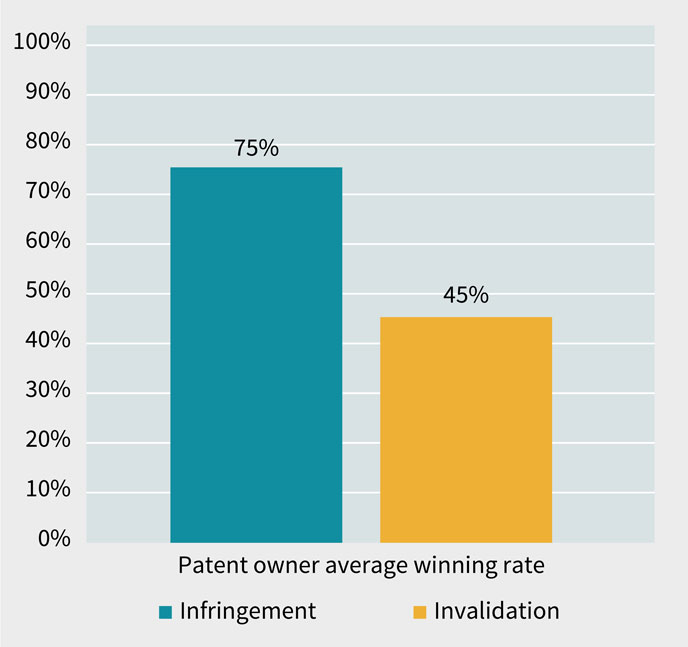 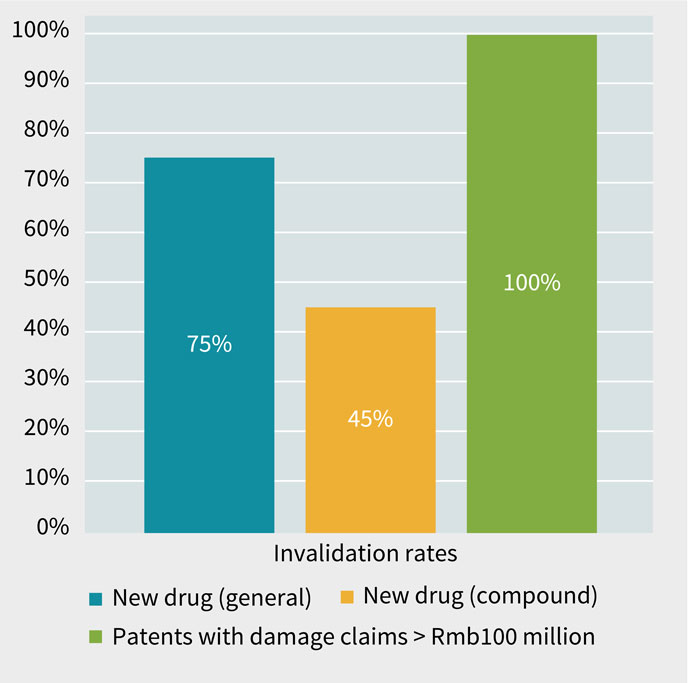 Figure 3. Average time to decision by the PRB and Beijing IP Court 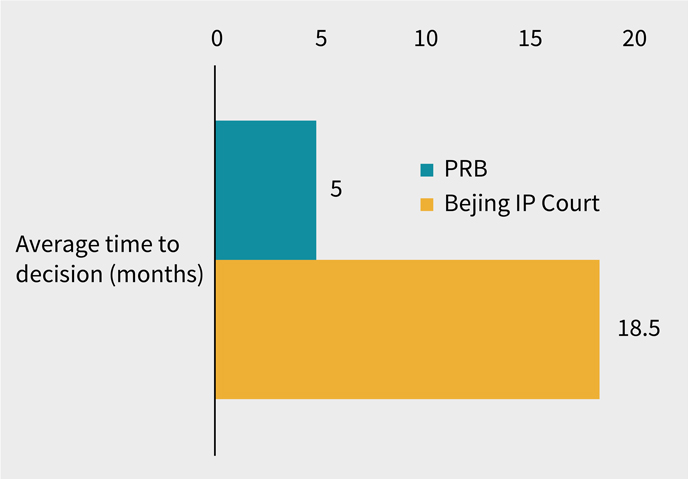 Patent office is more dangerous than courts for patent owners

According to various official statistics from Chinese courts, patent owners enjoy a win rate of over 75% in civil actions – this is even higher for foreign patent owners (more than 80%). In contrast, while the Chinese National IP Administration (CNIPA) and the PRB have published no official statistics, third-party analysis of the PRB’s published decisions shows a 50% rate of full invalidation and 60% rate of partial invalidation. What is more, patents where Rmb100 million or more was claimed in damages have almost all been invalidated.

The pharmaceutical industry is a vivid example of this. While the difficulty of developing a new drug is common knowledge, according to data collected by AstraZeneca, more than 75% of the patents on innovative drugs challenged in China have been invalidated, with more than 50% for patents on compounds (the supposed crown jewel of pharmaceutical patents).

Rules and procedures on validity are vague

Over the years, Chinese courts – particularly the Supreme People’s Court – have taken strong measures to develop and refine rules for the adjudication of infringement actions on procedures and merits, as well as on certain types of patent, such as SEPs. This is in line with the courts’ publicly stated goal of becoming a leading global force in adjudicating patent disputes. While areas for improvement remain and some may not like the policy positions behind certain requirements, stakeholders and practitioners are generally satisfied with the overall predictability provided by the official rules.

However, this situation is very different when it comes to validity, as demonstrated by the concept of inventive step. While the PRB offers a synopsis for each invalidation decision, this seldom gives any more detail than the basic three-step approach laid out in the Patent Examination Guidelines on non-obviousness. Although the guidelines include examples, these are so old and basic that they serve more of an educational purpose for beginners in the profession.

The courts have not been active in this area either. For example, the latest draft judicial interpretation published by the Supreme People’s Court in 2018 lacked any more detailed guidelines on analysing inventive step. In administrative lawsuits, the courts with jurisdiction over validity have deferred to the PRB on inventive step; it is extremely rare for a court to reverse a PRB invalidation decision on inventive step unless the PRB made an obvious error in its factual findings.

In 2018 the PRB published a book in which it attempted to consolidate its own case law from re-examination (appeal) and invalidation proceedings. While some of the selected cases give helpful details on how key validity concepts – including inventive step – should be interpreted under certain factual patterns, it remains unclear how this case law will affect the practice of individual examiners in specific cases.

Another example of the vagueness of the inventive step rules relates to how features of a claim are broken down (also known as the granularity of the breakdown). A common issue is that examiners perform an overly rough breakdown when identifying the distinguishing feature. Therefore, the identified distinguishing feature is so high level – and the objective problem that it solves becomes so generic – that it is easy to locate teachings in the prior art that have solved the same problem.

The absence of detailed rules on key validity concepts leaves an overly broad gap for interpretation and discretion for examiners in specific cases, leading to much higher unpredictability in invalidation decisions. This is particularly true for the third step of the obviousness analysis (ie, to determine whether a prompt would have existed for persons skilled in the art to apply a distinguishing feature onto the closest prior art to arrive at the solution of the subject claim under examination). In too many cases PRB examiners have adopted the widely criticised statement that “it would be readily perceivable for persons in the art to adopt the distinguishing feature” when invaliding a claim.

A further example of the vagueness of PRB invalidation proceedings is the absence of a dedicated procedure or rules for construing the claims. Consequently, there has been inconsistency among examiners on whether to perform a proper construction of the claims in invalidation actions before deciding the substantive validity issues.

These unfavourable statistics – especially when combined with the vagueness and unpredictability in the rules and procedures – are pushing many patent owners to reassess the true value of their Chinese patent portfolios, even as the Chinese government appears to be promoting patent protection. Some commentators have linked this to the recent closures of many pharmaceutical companies’ R&D centres in China.

Any patent owner should keep in mind the following procedural factors before initiating a fight.

Second, under the Supreme People’s Court judicial interpretation, the courts can (and in practice do) immediately dismiss a patent owner’s suit if the patent in question is invalidated by the PRB, even if the patent owner has filed an administrative lawsuit to challenge the PRB decision.

This procedural interplay means that if a patent owner loses before the PRB, it will take a long time to refile an infringement suit (assuming that it manages to have the PRB decision reversed). When time is of the essence, as is usually the case, a loss before the PRB could mean the loss of the entire legal battle.

Although there is a debate over whether to empower the courts to review validity in infringement actions in order to mitigate the congestion before the Beijing IP Court, in the meantime, patent owners must live with the current reality.

Patent owners should start with a modest goal – particularly those with a long-term and ambitious plan (eg, to take action against multiple infringers).

There have been various high-profile cases in which a patent owner initially picked too big an accused infringer and/or alerted too many potential infringers, and its patent was quickly challenged and invalidated by the PRB. It is a fair observation that the PRB could be under extra-legal influence in such cases, especially if the accused infringer is a leading domestic company that is favoured by the local government or the patent owner was regarded as disrupting the established order of the whole industry.

Therefore, if there is a choice, it may be wiser for patent owners to select a smaller target or ask for lower damages in the initial fight, and then escalate the fight towards bigger infringers and higher damages after their patent has survived an initial invalidation challenge.

In addition, patent owners should be more careful and prepared when selecting and evaluating patents to be enforced. It has become routine practice for established owners to perform fresh validity reviews in selecting patents (which costs significant money). If an owner is playing the long game and there are multiple patents that can be used, a cautious patent owner may assert patents that are less important first and reveal its core patents only when the time is right.

After reviewing the challenger’s invalidation submissions (there could be two), the patent owner should think proactively and pre-emptively about whether it is necessary to introduce a formal breakdown and construction for features and terms that could become the focus of a dispute in subsequent proceedings, so as to create a favourable effect on the examiners before the oral hearing.

If the examiners do not read the materials carefully before the hearing (which is often the case), the patent owner should verbally highlight the relevant issues during the hearing to ensure that its arguments are clearly recorded in the formal transcripts. It is also worth reiterating these points in the post-hearing attorney’s brief for the examiners’ better understanding.

Discussions here are particularly focused on obviousness, which is where most patents are invalidated; as mentioned above, the PRB recently published a compilation of its own case laws. PRB examiners have also highlighted the concept of ‘innovative conception’ in the obviousness analysis; the PRB defines this as the “logical methodology the inventor has adopted to reach the subject invention in search of solutions to solve the subject problem”.

The following rules are listed in the PRB’s book and cited by examiners – patent owners may find them helpful when rebutting an invalidation challenge:

Validity actions remain a formidable challenge for patent owners in China, but strategic preparation can help them to meet that challenge.

Patent owners should pay close attention to the validity component of disputes in China, as this poses the biggest source of risk to them. Here are some factors to remember: