In the last few years, the Indian government has taken affirmative steps to improve the administration of the Indian Patent Office (IPO). As a result, the IPO has become more efficient in terms of processing patent applications, bringing pendency down from nine years in 2015 to between four and five years in 2020. It is important to consider the changes that have taken place in India’s patent regime in the past six years, as well as key trends emerging at the IPO and the areas where further improvements are required.

The comparatively low ratio of filings by local innovators has been a concern for Indian policymakers for some time. To address this issue, the government launched the Scheme for Facilitating Start-ups Intellectual Property Protection in 2017. This enables start-ups to seek the assistance of patent attorneys for filing patent applications at a nominal cost. This measure, coupled with greater awareness among local innovators, has contributed to a consistent increase in the number of patent applications filed by Indian residents. In 2015-2016, applications filed by domestic innovators accounted for little more than a quarter of all applications. That number rose to almost 50% of total applications in 2021-22 (Figure 1). It is expected that this number will continue to grow as Indian residents become more aware of, and comfortable with, protecting IP rights in India. 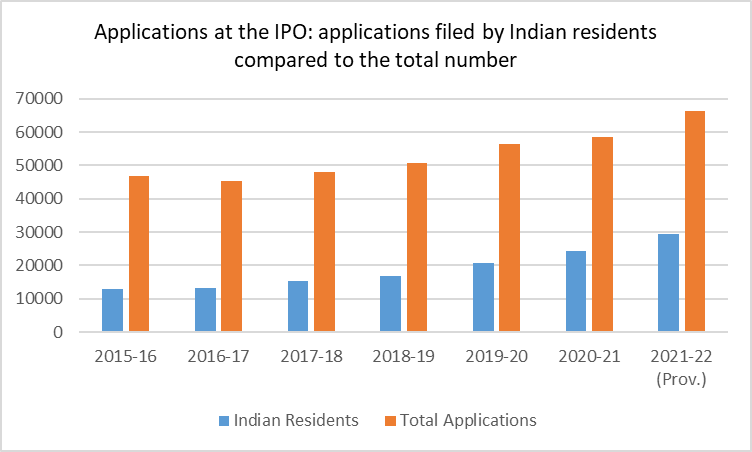 After a quiet year in 2018, the government continued to focus on reforms at the IPO in 2019. The Patent Rules were amended to do away with the submission of original documents in most cases. Expedited examination was broadened to include new applicant classes such as female applicants, government departments, institutions established by legislatures and government-financed institutions. The requirement to submit a certified priority document was also removed and the IPO started accepting WIPO DAS code in lieu of a certified priority document.  In 2020, the mandatory requirement to submit a verified English translation of a priority document in all Patent Cooperation Treaty national phase applications was scrapped.  Requirements related to the submission of a statement of working (Form 27) were also simplified. Stakeholders have recently received such continuous rationalisation of compliance requirements positively. These changes have also allowed applicants, especially international ones, to streamline their filing processes which, in turn, has reduced cycle times and increased confidence in the IPO’s administrative activities. Perhaps that is why the filings at the IPO continued their upward trend, even during the peak pandemic years.

As well as changes at the regulatory and policy levels, technological infrastructure has strengthened, which has quickened the pace of internal processes.  Over 90% of applications are now filed online, demonstrating that the online filing systems are trusted by innovators and attorneys. Issuance of office actions and patent certificates is also done electronically.

The IPO has also been increasing its staff strength consistently over the years (Figure 2). As a result of increased manpower and streamlining of case allocation among IPO officers, delays have reduced manifold. The IPO examined almost four times the number of applications in 2018-19 than in 2014-15 (Figure 3).  This speedier examination has in turn improved the average time between filing of request for examination and issuance of first office action and the backlog has been substantially reduced. The average time for examination from the date of requesting one was around six years in 2015; it stood at less than six months in 2020. The number of grants increased four times from 2015-16 to 2019-20 (Figure 4). Robust technological infrastructure also proved to be doubly useful when the covid pandemic started in 2020. Officers at the patent office also adjusted seamlessly to remote working. 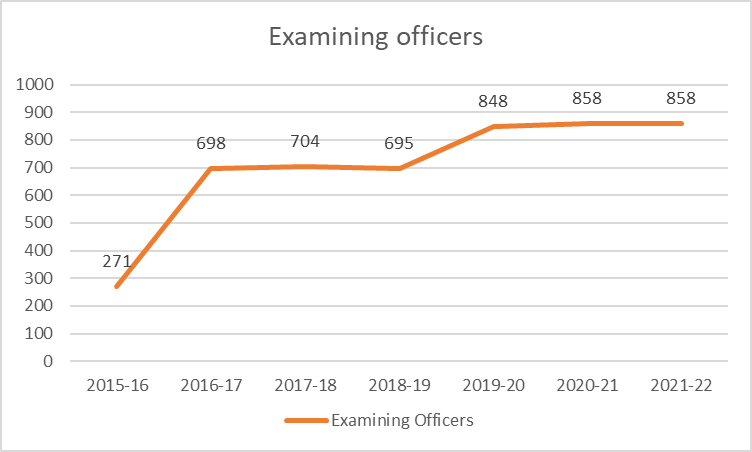 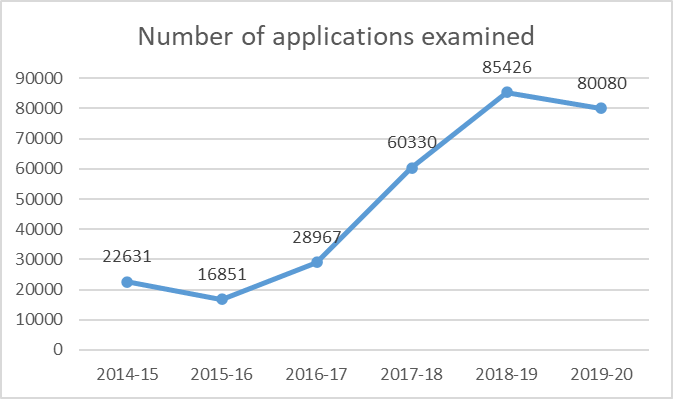 Other legal developments have strengthened stakeholders’ trust in the Indian IP ecosystem. In 2019, India launched its first Patent Prosecution Highway programme with Japan. During the start of pandemic, the Indian Supreme Court relaxed timelines of all legal proceedings in India. The IPO was swift in making process changes, which allowed applicants to take necessary actions in filing and prosecution without any fear of loss of rights. The judiciary has been keeping up when it comes to taking proactive steps for ensuring the efficacious adjudication of patent-related disputes. The Delhi High Court set up IP division benches, which have led the way in hearing cases that came under the purview of the erstwhile Intellectual Property Appellate Board. The Delhi High Court also formulated rules governing patent suits, which will further streamline their adjudication.

Backed by policy reforms and investments in technological and human resources, the IPO has come a long way in the last six or seven years in terms of numbers and efficiency. The government was able to make meaningful reforms because of its increased openness to hear stakeholders’ concerns.  Stakeholder meetings take place both at the IPO level and the ministry that oversees the IPO. The controller general recently held an online town hall session where everyone was allowed to raise their concerns. In 2021, the Parliamentary Standing Committee in its comprehensive report on Review of the IPR Regime noted various stakeholder concerns and made recommendations to the government, while the Prime Minister’s Economic Advisory Council has also recently published a working paper that reflects some of these concerns. These documents offer key insights into what is needed for the next steps to make the IPO more globally competitive.

One of the observations outlined in the paper is that while pendency has reduced at the examiner level, it has not resulted in major backlog reduction at the level of controllers. According to the paper, approximately 164,000 patent applications are pending following first examination.  The delay in disposal after issuance of first office action results in a high number of withdrawn applications. The paper suggested that a fixed time limit should be implemented for completion of all procedures at the patent office. It also stressed the need for dealing with pre-grant oppositions more effectively. One concern raised by both the Parliamentary Standing Committee Report of 2021 and the paper was the need to further augment staff at the patent office.  The paper suggested that overall manpower at the IPO should increase to 2,800 in the next two years. Another area where Indian policymakers need to pay urgent attention is low spending by India on R&D activities – we should see some activity in that domain soon.

The Indian government’s constant focus on strengthening the Indian IP ecosystem has brought about major improvements in the way that patents are filed, prosecuted and enforced. Moving forward, practices need to be regularly reviewed and further reforms introduced. It is safe to assume that with proactive action from policymakers, the IPO will soon compete with the top patent offices in the world.