More entities are seeking protection for AI-related inventions at the European Patent Office, but while grant rates are also on the rise they continue to lag the overall rate. In this co-published piece, Frances Wilding of Haseltine Lake Kempner offers a guide to key data points

The International Patent Classification (IPC) helps us here. It has an extensive dictionary in which catchwords are linked to classifications. The catchword “Artificial Intelligence” is linked to only one class: G06N. That at least covers machine learning and neural networks, technologies at the core of developments related to artificial intelligence.

The details of the technologies covered by G06N are given further below. Applications and patents given the classification G06N provide a useful indication of EPO-related trends.

AI applications at the EPO growing

There is huge growth in AI filings at the EPO. The chart below shows the numbers of European patent applications having the classification G06N which were published year by year from 2010 to 2020. 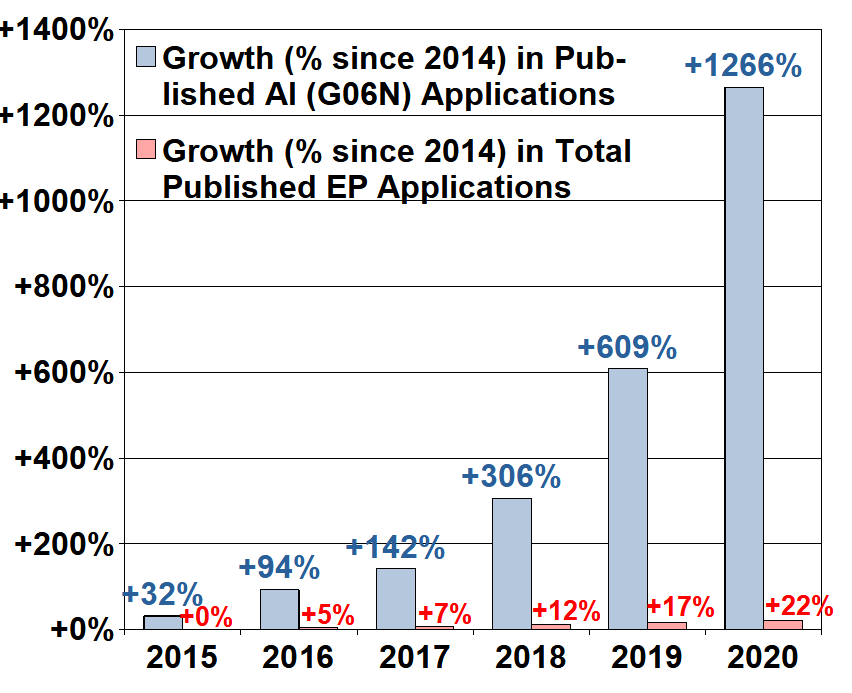 Between 2016 and 2020, just over 4,000 AI (G06N) applications were published. Around 1,000 different applicants were responsible for them. The top 25 applicants are listed in the table below. They accounted for just about half of all applications.

Number of grants increasing but lower than in other fields

Apart from grant as a patent, processing of a European patent application may be concluded by the application being refused, withdrawn or deemed withdrawn. The charts below show year by year numbers of AI (G06N) applications processed to conclusions.

These statistics are likely to be caused by the classification of AI at the EPO as a mathematical method which is not technical and cannot support an inventive step unless linked to implementation or specific technical application. The percentage outcomes for AI and all European applications are shown clearly below.

Although the statistics indicate that, in general, grant is less likely and refusal more likely for AI applications than for EPO applications overall, outcomes do vary greatly for different AI applicants.

The technologies covered by AI patent applications at the EPO

Where AI is being used, according to EPO applications

The most common non-G06N classifications applied to the 4,000 European patent applications published between 2016 and 2020 are indicated in the table below. The most frequent classifications relate to pattern recognition and image analysis. Of course, these techniques can, in turn, be used in many different contexts.

Some of the recent AI applications granted at the EPO

Below are the 32 AI (G06N) patents granted in November 2021, with links to the European Patents Register.

That use for AI has been found across many fields could be illustrated by the patents granted in November, which have concerns from cell (biological) analysis and motor vehicle loss assessment (for insurance purposes), through optimisation of mobile phone networks, to detecting whether a self-driving vehicle is travelling in a one-way street.

AI patents being opposed at the EPO

Since 2010, only nine AI (G06N) European patents have been opposed, as listed in the table below.

The last four oppositions listed in the table appear to be “straw man” oppositions.

Frances Wilding is a partner of Haseltine Lake Kempner, based in the firm’s London office.