Game over for Rubik’s Cube: shape not protected as a trademark, General Court says

The Rubik’s Cube was invented in 1974 by Hungarian Ernö Rubik. It has sold more than 400 million pieces worldwide, making it one of the most-recognised and best-selling toys of all time. To prevent competitors or imitators from manufacturing and commercialising the same or similar cubic shapes, Seven Towns, the company that oversaw the Rubik’s Cube’s IP rights, tried to protect it as a 3D trademark. This is unsurprising, as a trademark may theoretically exist forever if duly renewed, while patent protection is limited in time. However, Article 7(1) (e) (ii) of Regulation 2017/1001 (previously EU Regulation 40/94) prevents trademarks from bestowing a monopoly on technical solutions or functional characteristics of a given product. Trademark protection could be available for functional shapes to a certain extent, as long as the shape is not exclusively functional and necessary to achieve the intended technical result.

In 1996 Seven Towns sought the protection for the sign reproduced below, for 3D puzzles in Class 28 of the Nice Classification: 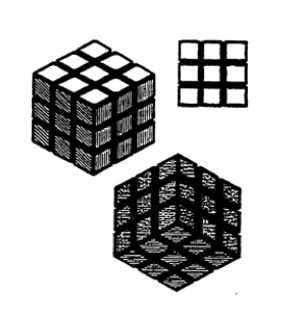 The shape of the Rubik’s Cube was granted registration as a 3D mark in 1999. However, in 2006 a German toy manufacturer – Simba Toys – filed a cancellation action on the ground that (among other issues) the mark contained a technical solution that could be protected by a patent only, in accordance with Article 7(1) (e) (ii). The Cancellation Division rejected the action, and the applicant unsuccessfully appealed.

In these initial decisions, the trademark was considered not to be contrary to Article 7(1)(e)(ii).

This was because the sign was represented in the trademark application rather than its alleged invisible features. The Cancellation Division argued that the technical result (ie, the rotating capability) did not derive from the shape but from a mechanism inside the cube, which remained invisible in the trademark.

Simba further appealed to the European Court of Justice (ECJ). In its judgment of 10 November 2016 (C-30/15 P), the ECJ overturned the previous rulings, found in favour of the cancellation of the trademark, and referred the case back to the Board of Appeal for a new decision. The ECJ concluded that the invisible internal functional elements should also have been taken into account in evaluating whether the essential characteristics of the shape were necessary to achieve the technical solution.

Each of those characteristics was necessary to obtain the vertical, horizontal and axial rotations that align and allow the player to win.

The trademark owner – Rubik’s Brand Ltd – challenged the EUIPO’s decision before the EU General Court. The court recalled Article 7(1)(e)(ii), which is aimed at preventing trademark law from:

The application of the rule, the court stated, is limited to signs consisting exclusively of the shape necessary to obtain a certain technical result only. It confirmed, in accordance with previous case law, which characteristics are essential and which should be assessed on a case-by-case basis. This can be done through simple visual analysis or a detailed examination of the mark, which should also take other aspects into account (eg, data relating to earlier IP rights on the same shape). Subsequently, the authority must determine whether all the features identified as essential perform a technical function.

The appealed decision was reversed in respect of the colour differences of the six faces. Colours had not been included in the description or in the graphic representation of the mark and therefore could not be considered to be an essential feature. However, the court confirmed that the other two essential characteristics of the sign, “the overall cube shape, on the one hand, and the black lines and little squares on each face of the cube, on the other”, are inherently functional. Therefore, what was regarded as an incorrect assessment by the board (ie, that the colours were an essential feature) did not prevent the court from confirming the cancellation decision. What was confirmed was that the shape and the lines and squares, which were represented in the trademark and recognised as essential features, allow the Rubik’s Cube to rotate. The overall shape thus performs a technical function, notwithstanding the fact that the rotation was not visible in the graphic representation of the trademark.

In this respect, the court stated that:

“if the prohibition under Article 7(1)(e)(ii) of Regulation No 40/94 only applied to shapes the graphic representation of which reveals all the characteristics allowing a product to perform its technical function, it could easily be circumvented. It would be sufficient to omit, in the graphic representation, a characteristic without which that technical function could not be achieved, notwithstanding the fact that the function requires the presence of all the essential characteristics displayed in the sign at issue. If this were the case, the provision referred to above would not safeguard the public interest in competitors being able to use technical solutions which are not, or no longer, protected by a patent.”