Foxconn and Sharp – a patent strategy marriage made in heaven 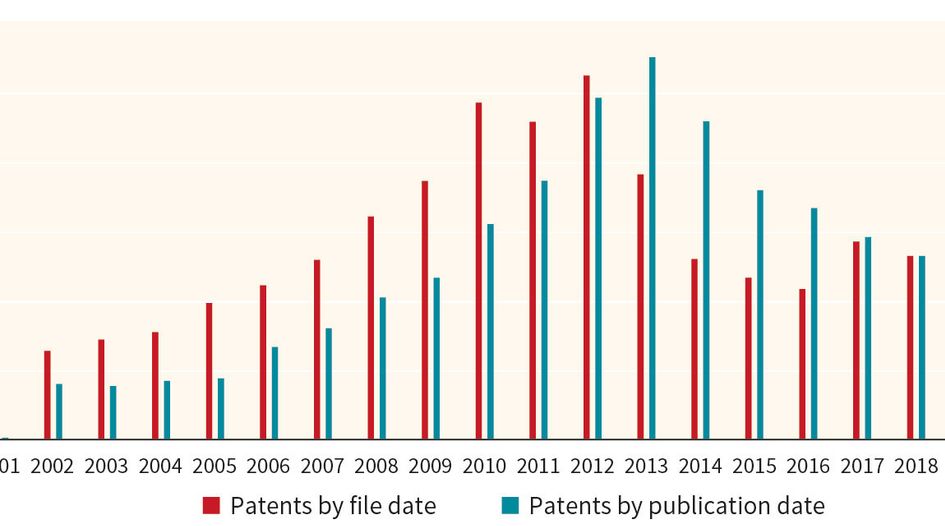 Data analysis exposes the extent to which Taiwan’s patent heavyweight has slashed its holdings, expanded its technology coverage and monetised its Japanese acquisition’s assets

Foxconn, also known as Hon Hai Precision (its parent company), has long been celebrated as a leading player in the IP community. Under chair Terry Gou’s savvy guidance, the company has built a robust patent portfolio with recognised clout in the United States as well as other key jurisdictions. In 2016, when Foxconn acquired Sharp for $3.8 billion, there were questions over how the company would deploy the intellectual property that came with it. Around the same time Gou made it clear that the focus would be on eliminating deadweight in Foxconn’s holdings.

In 2015 Gou asserted that Foxconn had been filing far too many patents and that quality over quantity would become the order of the day. Analysis of the company’s output shows that filing levels had already started to drop before Gou went public, with a plunge in volume from 2013 to 2014 (see Figure 1).

Figure 1. Patents by file date versus publication date – a comparison

The combined Foxconn/Sharp portfolio shows that filing levels remained low in 2016, but activity picked up slightly in 2017 and 2018 (see Figure 2).

Being selective with patent filings was not the only way that Foxconn streamlined its portfolio. The process has also involved abandoning significant numbers of US patents (see Figure 3). Each year between 2015 and 2018, the company has allowed about 40% of its patents that were up for renewal to lapse. In 2017, this reached just over 50%. Isolating by company shows that Foxconn accounted for a majority of these abandonments. In 2017, it allowed 70% of its patents to lapse, which amounted to 2,457 assets. In comparison, Sharp has been abandoning around 20% of its assets since 2014, which equates to about 500 patents each year.

Regardless of Foxconn’s streamlining efforts, the company still owns a robust portfolio. Foxconn’s and Sharp’s assets combined amount to 105,645 active patents globally. Of these, 50,891 are grants and 54,754 are applications. Sharp’s contribution to the portfolio is significant, accounting for 73,575 active assets (see Figure 4). 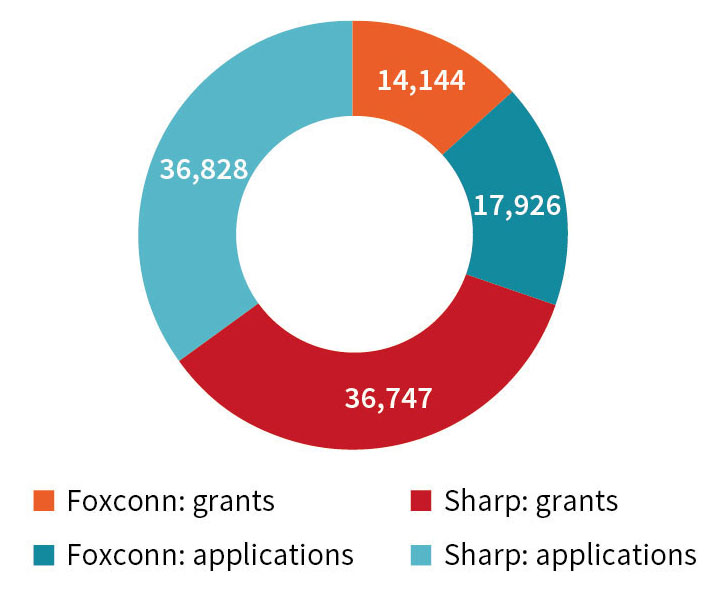 The United States is the most important jurisdiction for patent protection, followed by Japan and China, with 19,431, 16,798 and 11,781 active grants, respectively. Notably, there are only 393 active grants registered in Taiwan. This is a strong reflection of Foxconn’s commitment to cutting deadweight – the company held the title of the island’s leading patent applicant for 14 years. Figure 5 shows the top geographies for Foxconn and Sharp when considered as separate entities. 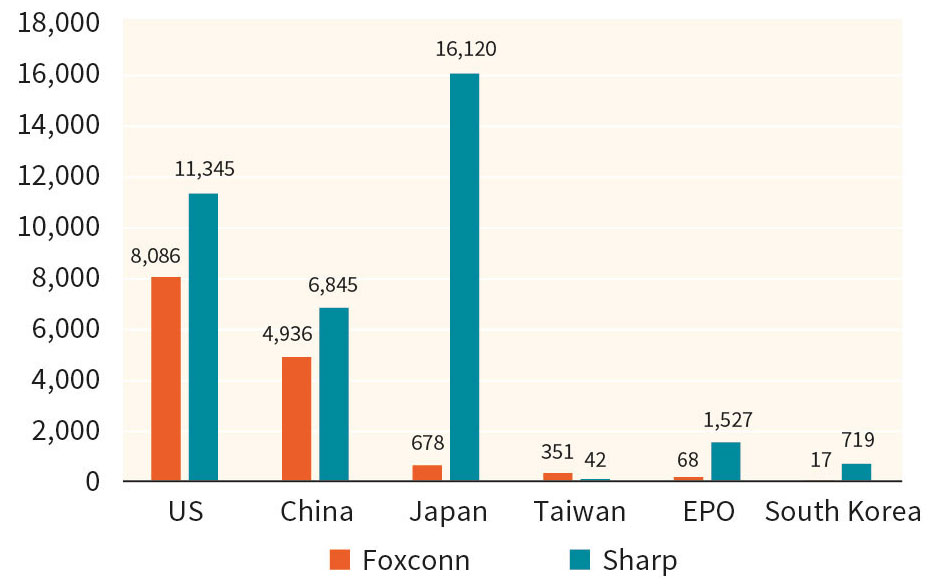 Drilling down into filing activity by geography shows that application levels have dropped in all major markets, except for China, which has become increasingly important (see Figure 6). Both Foxconn and Sharp have contributed to growth there.

Source: Anaqua’s AcclaimIP Analytics Software; data is accurate as of 9th July 2020. The data for 2019 and 2020 is incomplete given the 18-month lag between when a patent is filed and when it is published

Foxconn and Sharp both have a history as active sellers on the secondary market. It was assumed that the combined company would continue utilising this tool, although Hon Hai previously suggested that licensing would be the preferred way of monetising Sharp’s assets.

According to Richardson Oliver Insights Sharp has divested 875 assets since 2014 and Foxconn 1,026 (see Tables 1 and 2). Notably, two of the latter’s largest outbound transfers were to Cloud Network Technology Singapore – a subsidiary of Foxconn – and to ScienBiziP, which is the independent entity that handles Foxconn and Sharp portfolio management. After eliminating businesses that are affiliated with Hon Hai, its outbound transfers drop to 142 assets. Sharp has sold off patents to both NPEs and operating companies but deals with corporates have clearly been favoured. It has transferred patents to some well-known heavyweights, including Philips, Dolby, Merck and Huawei.

Source: Richardson Oliver Insights (ROI). Note: this is not an exhaustive list of outbound transfers, but a compilation of the largest transactions

Source: ROI. Note: a * denotes a company that is either a subsidiary or an affiliate of Foxconn. Owing to the complexity of Hon Hai’s corporate tree some assets may have been excluded. This is not an exhaustive list of outbound transfers, but a compilation of the largest transactions