In China there is no substantive examination for design patent applications - therefore a design filing will proceed to grant, as long as it satisfies the China National Intellectual Property Administration’s (CNIPA) formality request. Despite the CNIPA’s Measures on Regulating Patent Application Behaviour, which were issued on 11March 2021 to address “abnormal patent filing”, bad-faith applications that were already granted look set to fall through the cracks, unless rights holders initiate invalidation actions of their own accord. Two such cases show that although rights holders stand a good chance of winning an invalidation action, it is strongly recommended to file for the design in the first place.

The international cosmetics brand Shu Uemura designed a foundation brush and launched it onto the Chinese market in 2017 without registering it as a design patent. Known for its unique curved hexagon shape, which enabled it to be easily held, along with its quality brush which results in a smooth stroke from different angles, the product became a hit. Noticing its success, a Chinese individual copied Shu Uemura’s foundation brush and registered it as their own design patent before the CNIPA. Shu Uemura reacted by filing an invalidation petition.

The case was tricky because Shu Uemura had been selling the foundation brush for years;  it was not easy to find pictures of the initial foundation brush published prior to the filing date of the design patent at issue. Shu Uemura conducted an extensive online search to collect prior design evidence, yet most pictures available were taken from angles that were neither identical with, nor similar to, the views of the design at issue. This is not surprising – pictures used for promoting a product are often taken by the commercial photographer to best present the product per se rather than reflecting the design from the angles mandated by the CNIPA in the design filing requirement.

Fortunately, Shu Uemura found solid prior publication evidence, which the CNIPA found admissible and ruled in its decision (51356) to invalidate the copycat design patent. The CNIPA cited the picture of Shu Uemura’s foundation brush and held that, from the view of an ordinary customer, the design at issue was substantially identical to the prior design and should be invalidated.

The design at issue 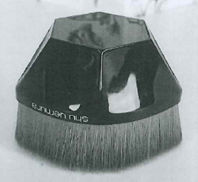 OLEINA is a famous Ukrainian sunflower seed oil brand, dating back more than 20 years. A Chinese individual copied its product label and registered it as their own design patent in bad faith. The copycat design slavishly copied not only the patterns, but also the tagline and even the registered trademark on the product label. An invalidation petition was filed before the CNIPA.

The CNIPA held in its invalidation decision (45213) that the design at issue was invalid on the grounds that there were no material differences between it and the comparison design. The CNIPA first found that the comparison design disclosed the overall shape and pattern arrangement of the design at issue, as well as design details such as patterns, text and composition, which are reflected on the front of the label. Subtle differences – such as the shape of the sunflower and the words on either side of the label – were found to be insignificant in affecting the overall visual effect. Like the Shu Uemura foundation brush case, the petitioner had to go to great lengths to search for and collect prior design evidence.

The design at issue 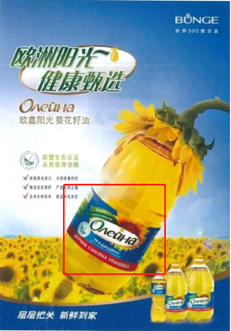 It is therefore strongly recommended that rights holders file their design patent applications with the CNIPA before launching a product or making it available to the public. A proactive filing strategy could ensure that no loopholes are left for infringers to game the system. Where a design has been pre-emptively filed by others, rights holders are advised to file an invalidation action to annul the bad-faith design as early as possible.