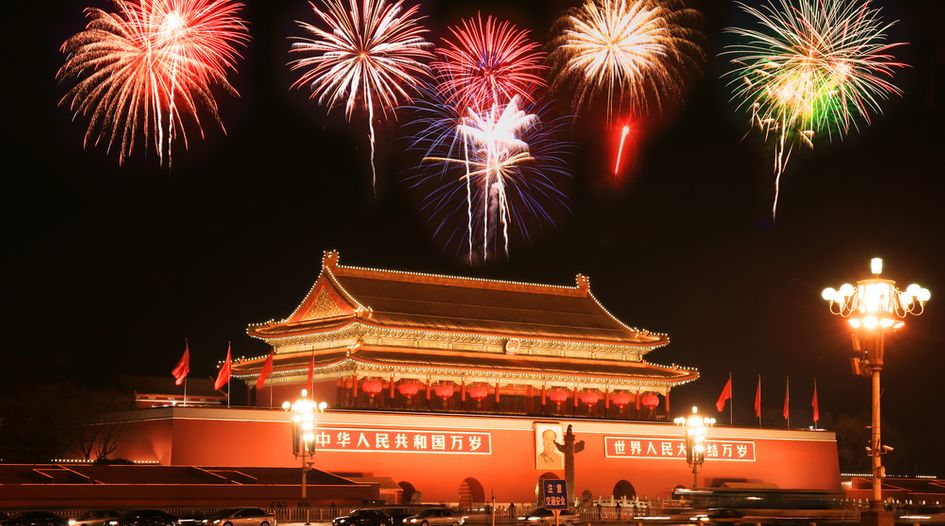 On November 26, 2018, the Judicial Committee of the Supreme People's Court issued new rules regarding preliminary injunctions in IP disputes that will be officially implemented on January 1, 2019. The new regulations will be closely watched, coming on the heels of the very high-profile preliminary injunctions issued against Apple by the Fuzhou Intermediate People’s Court in late November.

First, it is interesting to note that all of these changes and additions relate to preliminary injunctions and implementation thereof.  If you are here looking for information on money damages, FRAND or SEP issues, permanent injunctions (that almost always issue after judgment in patent cases in China) or anything else, you can stop now.  However, if you are interested in China putting some “meat on the bone” regarding preliminary injunctions, including when they should be enacted and what is required to ask for one, then read on!

I want to begin by making clear the difference between a preliminary injunction and a permanent injunction. A preliminary injunction is sought generally before a court judgment or trial, and in many cases even before filing a litigation. It is generally not appealable beyond reconsideration to the same court that granted the preliminary injunction, and usually requires a surety bond to protect the respondent in case the grant is later determined to be in error. A preliminary injunction is usually temporary, and the court defines its term. For example, Article 13 of the Provisions requires that the duration for injunction shall be determined based on the applicant's request or the merits of the case and an order to suspend infringement of intellectual property shall generally be upheld until the ruling for the case takes effect. (If an applicant requests continued enforcement, the applicant must make the request within seven days before expiration.)

A permanent injunction, on the other hand, is just that: permanent. It generally occurs after trial and appeal. In China, a bond is not required for a permanent injunction to be enacted. However, any permanent injunction granted by the trial court is stayed pending appeal at the higher court (now the Supreme People’s Court for all patent case appeals). These are different animals, and are sometimes confused, even by sophisticated parties like RPX.

Article 3 provides details regarding venue for applying for a pre-litigation preliminary injunction. Whereas patent cases can generally be filed anywhere the accused product is sold, Article 3 appears to restrict where a pre-litigation preliminary injunction application “to a People's Court at the location of the respondent which has competent jurisdiction.” (emphasis added). We will have to see what the “location of the respondent” actually means, but on its face, it requires some physical presence of the accused infringer, rather than just third-party seller of the respondent’s product. If this is correct, it makes it very difficult to “hometown” the accused infringer in a pre-litigation preliminary injunction because the location of the court has to have some connection to the accused infringer’s physical operations.

Article 4 requires a preliminary injunction application to include, among other things, the length of the proposed injunction, a detailed explanation on the “irreparable injury” to the applicant or difficulty for enforcement of the judgment, and proof of the applicant’s assets or creditworthiness for providing security if the injunction is issued (or the reason for not requiring provision of security). Jumping forward a bit, Article 10 defines "irreparable injury” in a way that seems to make sense and comports with similar international laws (even if they are not enforced in places like the US). Interestingly, though, one of the explicit irreparable injuries is the “applicant's relevant market share to be evidently reduced.” What level of proof is required in this regard is not clear, but the fact that the rights owner’s market share will be explicitly considered makes tremendous sense and likely allows for greater use of preliminary injunctions.

Interestingly, the Fuzhou court’s orders granting preliminary injunctions against Apple provide a list of reasons for the grant of relief that closely matches those of Article 10:

Article 5 states that the court shall, prior to granting an injunction, communicate with both the applicant and the respondent, except when “the situation is urgent.” Article 6, in turn, defines the circumstances under which the court should find that "the situation is urgent." The Fuzhou court before granting Qualcomm’s recent requests for preliminary injunctions against Apple apparently did not contact Apple before granting the relief. This is clearly permissible under Articles 5 and 6 of the Provisions.

Article 7 defines the factors the court should consider in granting a preliminary injunction. They include that the validity of the subject IP, whether the injury suffered by the applicant as a result of the failure to enforce injunction will exceed the injury suffered by the respondent as a result of enforcement of injunction, and whether the injunction would compromise the public interest. Article 8 then provide the factors on which the validity of the IP should be based and includes whether the rights have been subject to substantive examination, invalidation/revocation procedures, and whether ownership of the IP is in dispute. Note that the factors do not include the court launching its own substantive validity analysis. This is consistent with Chinese patent litigation procedure, in which the court does not analyze validity, as that task is done by the Patent Re-examination Board (PRB) of the National Intellectual Property Administration.

Article 9 mandates that an application for a preliminary injunction based on a utility model or design patent include a search report and patent evaluation report issued by the patent administrative authority of the State Council or a decision of the PRB upholding the validity of the said patent. This is consistent with Article 7, because neither a utility model nor a design patent is substantively examined before issuance.

Article 11 addresses the amount of surety bond required of a preliminary injunction applicant.  Specifically, an applicant is required to provide “security in an amount equivalent to the loss which may be incurred by the respondent as a result of enforcement of the injunction, including reasonable loss of sales proceeds and custody expenses of the products involving in stopping the infringement.” Further, if the bond amount is found to be insufficient during the implementation of the injunction, the court can require additional security that, if not paid, may result in the court rescinding all or part of the injunction.

This is an important change. Previously, different courts had different approaches to the requisite bond amount. In the past, the amount of bond required was generally inconsistent across courts and judges. The main consistency was that the amount was usually much less than the amounts required in Germany, where the bond is, like under Article 11 of the Provisions, based on the amount of damage the injunction could cause the respondent. Prior rules in many courts in China stated that the bond amount was equal to the amount of damages claimed in the litigation. So, if only a small amount of damages is claimed, the bond could be relatively small. Further, in prior cases according to provisions of the Beijing Higher People’s Court, where the applicant could not provide the bond equal to the amount claimed, if the parties' rights and responsibilities were clear and irreparable damage would occur, the court may require only 20% of the amount claimed. Different courts have similar, but different, rules as shown below:

Article 11 aligns the amount of bond required with other countries. Of course, the only major jurisdiction other than China that regularly grants injunctions in patent cases is Germany. Since Chinese patent law and litigation was largely based on the German model, such consistency probably makes sense. I suspect some courts will create some sort of hardship exception in certain cases, but we shall see. For now, litigation finance and other funding companies are likely eagerly waiting to offer money to successful preliminary injunction litigants.

Article 12 is also quite important. In Germany and many other jurisdictions, if a rights owner pays into court a surety bond as guarantee for a preliminary injunction, the respondent can pay a counter-guarantee to lift the preliminary injunction. Under Article 12, this is not the case in China. Article 12 states that any injunction enforced by a court shall generally not be lifted due to security provided by the respondent, except where the applicant gives consent. Obviously, the applicant is not likely to provide such consent. This makes a preliminary injunction in China very powerful, since it cannot be appealed beyond a reconsideration to the same court that granted it, and the enjoined party cannot pay any amount to life the injunction.

Article 14 states that if any party objects to the injunction ruling and applies for a review, the People's Court shall examine the application and make a ruling within 10 days from receipt of the application for review. Clearly, since the same judge(s) that made the preliminary injunction decision are asked to conduct the reconsideration, rarely will the court change its mind on reconsideration after only 10 days.

Article 17 states, inter alia, that if an applicant retracts its application for an injunction or applies for lifting an injunction, such action shall not waive the compensation liability stipulated in Article 105 of the Civil Procedural Law. This is important so that a preliminary injunction is not used improperly as a sword. An applicant cannot simply withdraw the application and expect that the respondent will be made whole. An applicant must make sure they intend to live with the preliminary injunction if it is granted. Of course, an applicant can simply not fund a bond before an injunction is enforced without penalty. But once the respondent is affected, there is no going back.