Over recent years, Huawei has maintained growth in the global marketplace by continuously investing in R&D. This has enabled it to develop both a competitive product portfolio and a significant patent portfolio, making it a world leader in the 5G space.

However, this constant R&D activity raises several questions. During the transition from 4G to the new 5G wireless standard, how has Huawei’s SEP portfolio evolved? In particular, has there been any difference in quality between the 4G and 5G portfolios? If so, what might be the reason for this?

Before answering these questions, this article discusses the three concepts that are usually employed to evaluate patents: quality, value and price.

The notion of quality in the United States is tied up with the patentability requirements under Title 35 of the US Code – in particular, Sections 101 (utility and eligibility), 102 (novelty), 103 (non-obviousness) and 112 (adequately described).

If a claimed invention is eligible, novel, non-obvious and described with clarity, it is deemed to have at least a baseline (or a minimum) of quality.

Quality patents must feature claim language that is crafted carefully enough to ensure accuracy and logic, as this will broaden their scope and, consequently, reduce the chances for competitors to design around them.

Despite the different definitions that exist, the concept of patent quality is widely accepted as being the foundation of value and price.

If a patent is practised without authorisation, its owner may decide to enforce it before a court. Confidence in patent enforcement provides the foundation for patent transactions such as selling, licensing and pledging.

The expected value earned from these transactions is widely agreed on as being the commercial or monetary value of the patent as an asset.

That said, a heavily researched and well-written patent may meet all the patentability requirements but have little value. For example, the invention may be outdated or related to an obscure technology that only the inventor is interested in developing.

Patent value – whether realised from enforcement, transactions or other commercial practices – goes well beyond the four corners of a patent by taking into account commercial viability, market conditions and industry position.

For those that are managing IP assets, the patent value need not be a specific monetary figure. At this stage, it is more important that owners understand the potential monetary return of the patent, especially when deciding whether to maintain, activate or discard it. 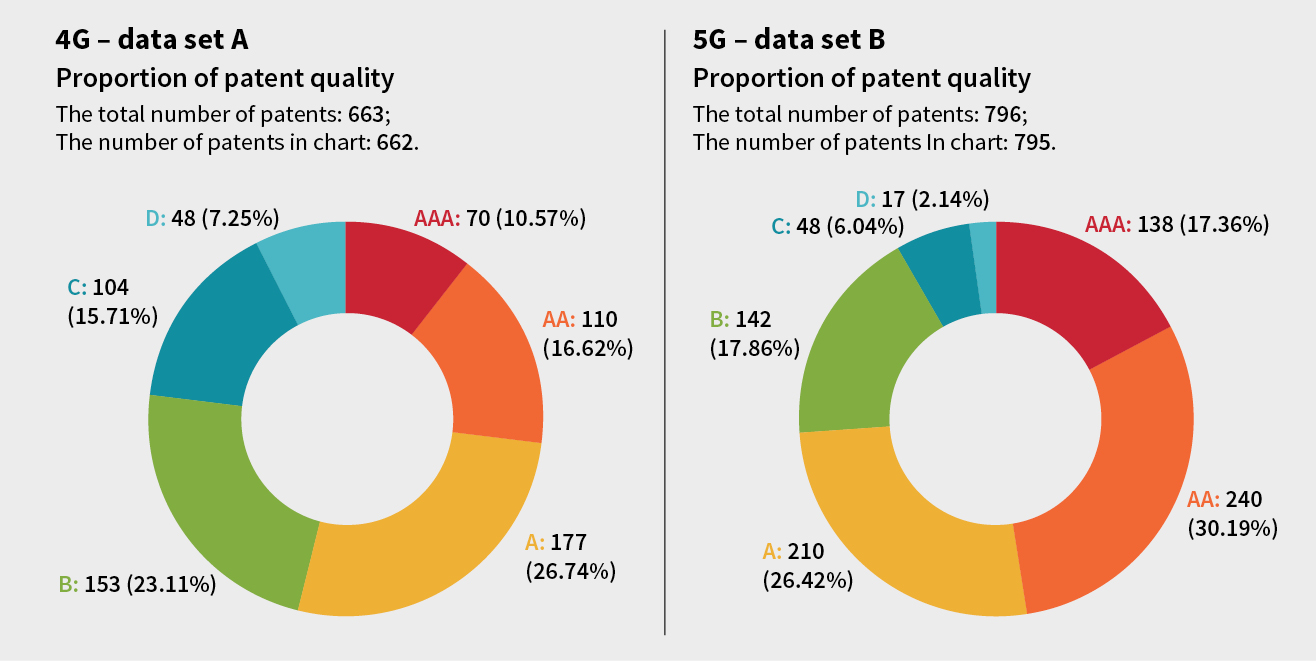 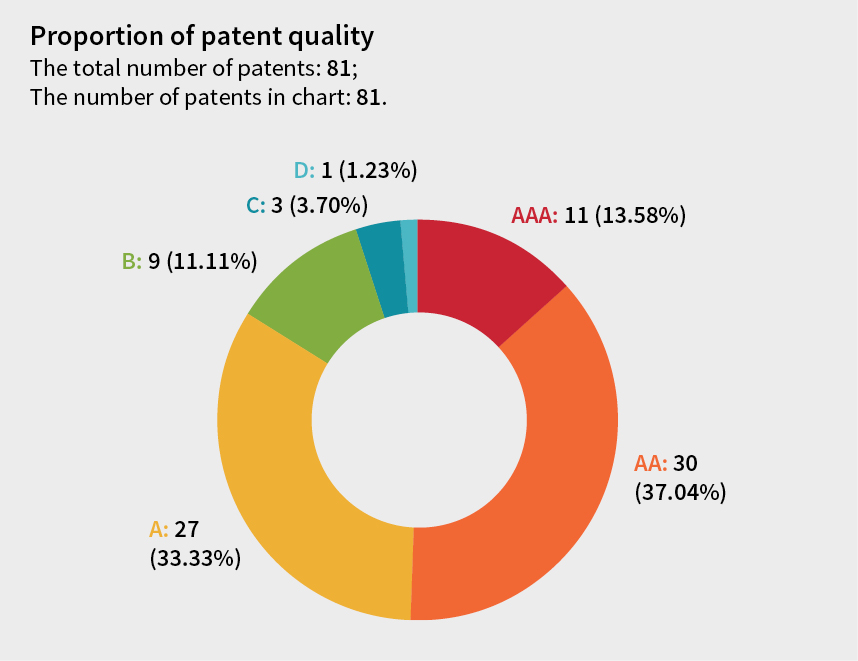 Once a commercial activity takes place, both parties must determine a specific amount for the monetary value. This is when they resort to patent price.

The price of a patent is generally formulated through negotiation or litigation based on the knowledge that each party has concerning the value of the patent at issue.

It is the concept of patent quality that determines whether a patent can be deemed to be an asset, according to its validity and enforceability.

It should be clear by now that although practitioners may advocate different approaches, it is broadly agreed that patent quality, value and price are separate (yet highly dependent) factors.

For the purposes of this article, quality is based on Patentcloud’s quality ranking, which was developed by InQuartik and features an algorithm that uses machine learning to calculate the relative eventuality of prior art references being found for a patent.

In this research, ETSI, Patentcloud and the USPTO were used as the primary data sources. In particular, 4G and 5G US SEPs declared by Huawei before 1 July 2019 were retrieved from the ETSI database. The data includes both patents filed by Huawei and those acquired from third parties.

In the retrieved data sets, 873 US patents had been declared as 4G SEPs and 1,006 as 5G SEPs. For comparison purposes, we split these further into: :

However, we excluded data set C from our analysis because these patents were declared as both 4G and 5G SEPs; therefore, it was not appropriate to use them in a comparison between the two groups. 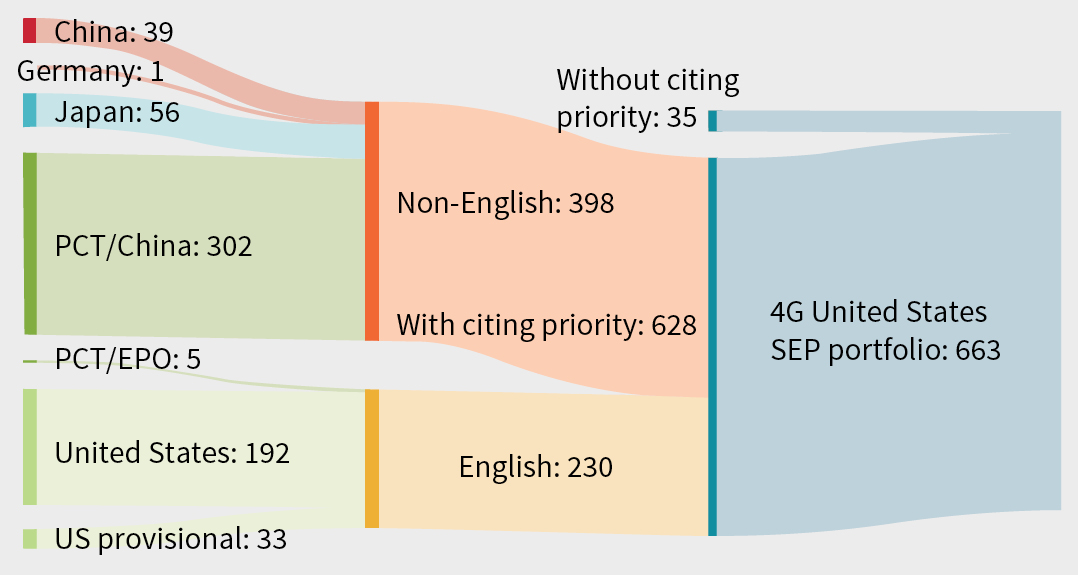 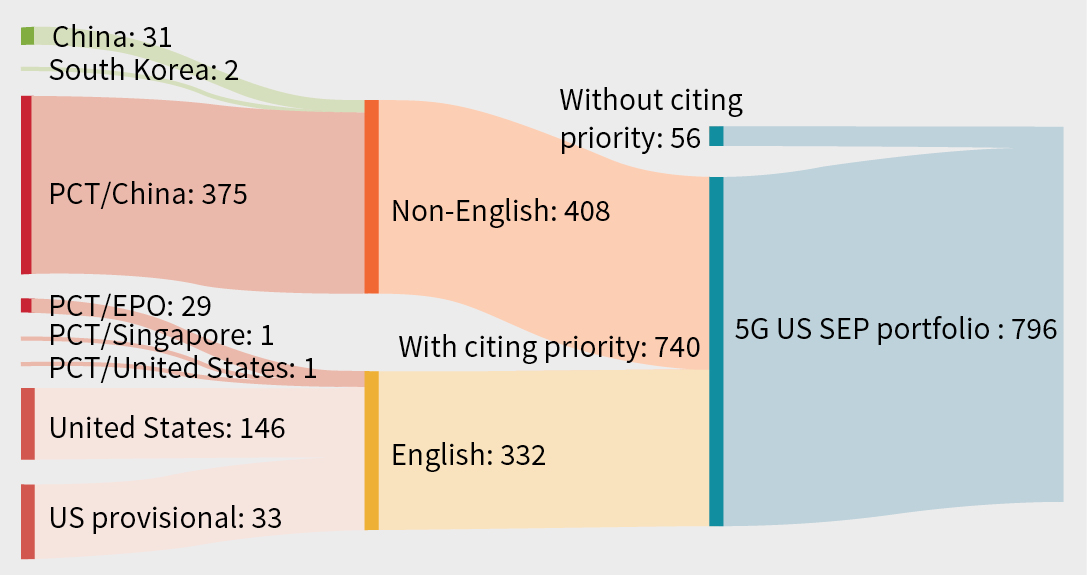 Table 4. Comparison of 4G and 5G priority sources and languages

Of the 663 patents in data set A (4G SEPs only), 662 already have a Patentcloud quality value. Moreover, 53.93% have a quality ranking above A. Table 1 reveals that with time (earliest priority year), the number of patents with a quality ranking of A and above has increased gradually. In addition, the ratio of these patents exceeded 50% from 2010 to 2015.

To compare the two data sets directly, the percentage of patents in Huawei’s declared SEP portfolio with a quality ranking of above A has increased from 53.93% (4G) to 73.97% (5G).

Finally, we considered what we refer to as Huawei’s 5G+ portfolio. The standardisation process of 5G effectively started with TSG 72 in June 2016. Therefore, we further filtered the declared 5G US SEP data set (data set B) using a post-June 2016 priority date to compile target data set D. This data set contains 81 US patents, all of which have quality ranking data from Patentcloud.

Figure 2 shows how Huawei’s 5G+ patents shape up in terms of quality, revealing that 83.95% have a rating of above A – the highest portion of the three examined data sets.

To understand the difference in quality between the declared 4G and 5G SEPs, we decided to test whether certain factors have had an impact on this.

Figure 5. Countries where Huawei’s 4G inventors are based 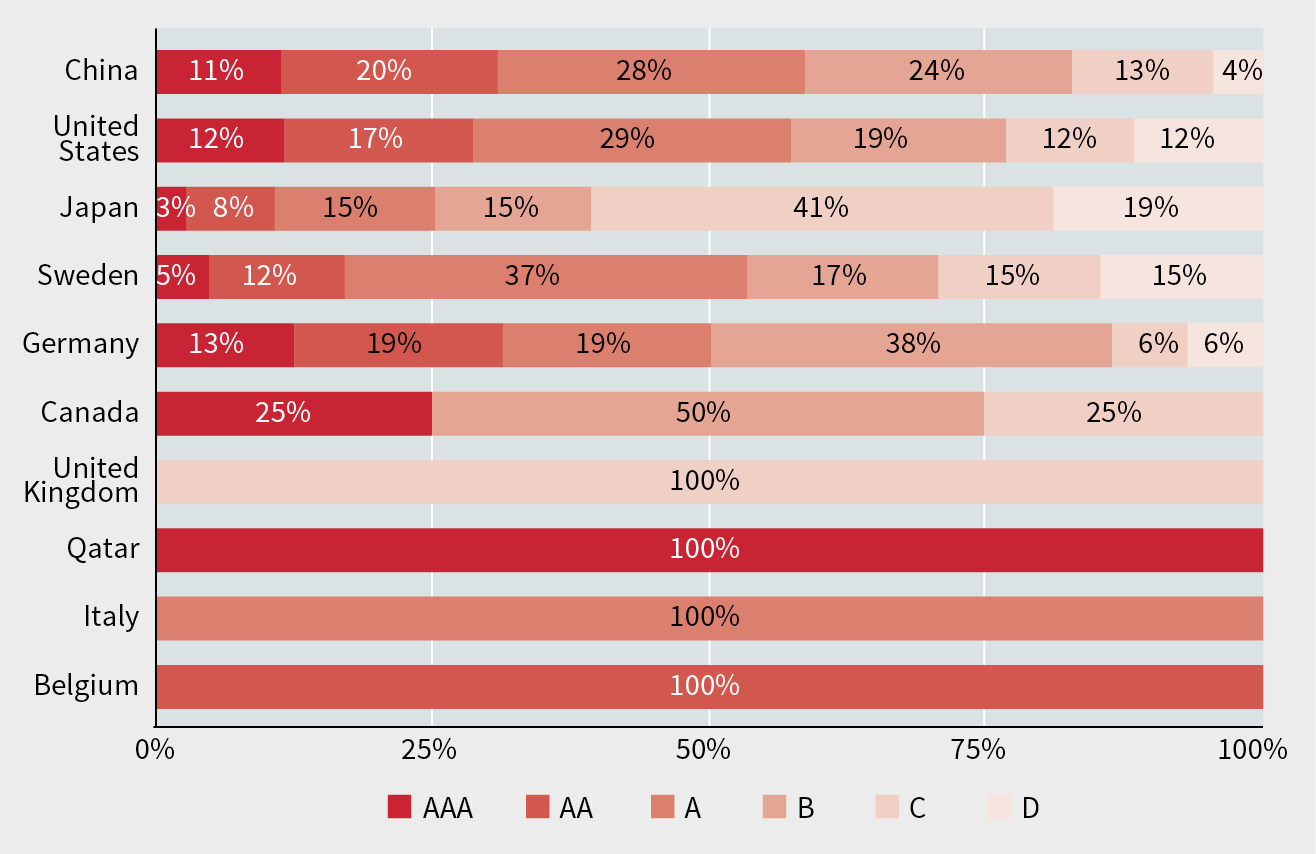 Source and language of priority documents

Although this analysis focuses on Huawei’s US portfolio, most of these patents cite an earlier priority document overseas. This means that many of Huawei’s patents were first drafted and filed in other jurisdictions, then filed in the United States through either the Paris Convention or the Patent Cooperation Treaty (PCT).

The first factor to consider is how the source and drafting language of these priority documents affects patent quality. To do that, we extracted the priority information of each patent in our data sets, and then analysed the earliest priority document for each one.

The 5G data set contains 740 US patents citing priority and 56 US patents without (see Figure 4).

So, which priority languages contributed to the highest quality patents? When comparing the source country of earliest priority, the countries ranked by highest ratio of high-quality patents are: PCT/United States (100%), South Korea (100%), PCT/Singapore (100%), PCT/China (79%), China (74%), US provisional (74%), United States (65%) and PCT/EPO (55%). The patents citing non-English priority (78%) were more likely to be high quality than the patents citing English-language priority (69%).

We also sought to determine whether the country of the inventor affected the quality of the patents.

The 663 US patents in the 4G portfolio were contributed by 594 inventors across 10 countries (see Figure 5). Of these, 436 inventors were based in China, accounting for 73.4% of all the inventors. The remaining 26.6% were spread across nine different countries

Meanwhile, Huawei’s 5G portfolio comprises 796 US patents contributed by 551 inventors (see Figure 7). Here, 333 inventors in China account for 60.4% of all inventors, which is still the largest share of the 18 countries.

In comparison to the 4G portfolio, Huawei not only expanded the number of inventor countries from 10 to 18, but also increased both the total number and the ratio of inventors from countries other than China. In other words, along with market globalisation, Huawei has developed a more international R&D team. In addition, it has grown the number of inventors in Canada from four to 83. Moreover, the 5G portfolio discloses only one inventor in Japan, despite 60 being disclosed in the 4G portfolio.

But is this difference in the country of inventors responsible for the difference in patent quality? By comparing the correlation between quality and inventor country of the 5G portfolio, especially the ratio of quality ranking above A from countries with more than 10 patents, we find that Canada, China, the United States, Sweden and German contributed more than 60% of these patents (see Figure 8).

As Table 5 demonstrates, almost all of the patents across all of the inventor countries improved in quality in the transition from 4G to 5G, especially for inventors in Canada, where the number of patents with a quality ranking above A increased significantly from 25% to 76%.

The 81 US patents in the 5G+ portfolio were contributed by 84 inventors. Interestingly, the composition of these inventors differs greatly from the 4G and 5G portfolios (see Table 6).

Examining the patents with a quality ranking above A from countries with more than 10 patents, we find that Canada and the United States contributed more than 75% of these patents.

Figure 7. Countries where Huawei’s 5G inventors are based 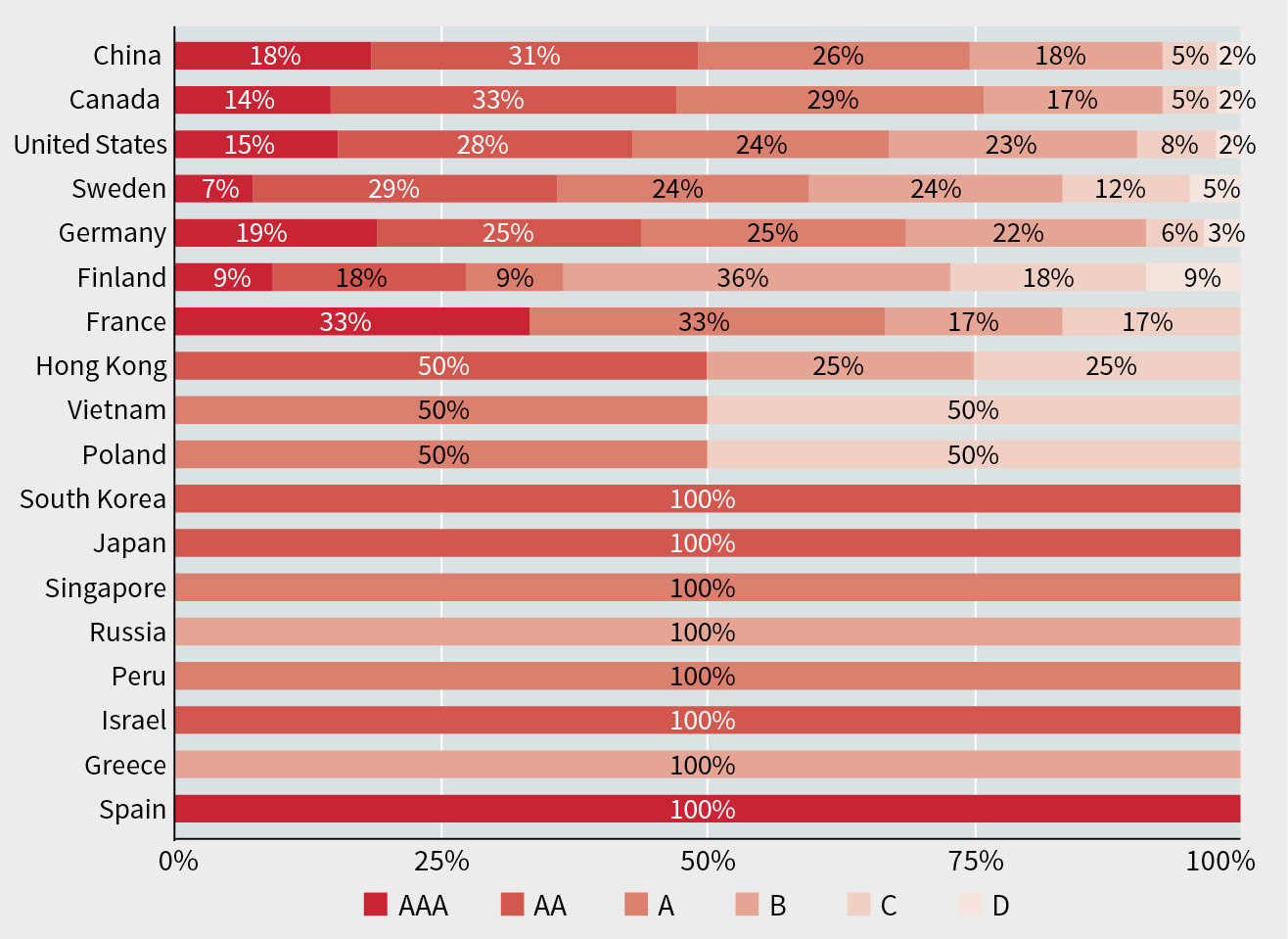 Table 5. Comparison of 4G and 5G SEP quality by country of inventor

Table 6. Countries where Huawei’s 5G+ inventors are based

Next, we tried to find whether the patent prosecution law firm disclosed in the patents affected their quality. Specifically, we retrieved the “attorney, agent or firm” data of each 4G, 5G and 5G+ patent and compared this with its quality rating.

Although some patents in the target data sets did not provide this information, we dug deeper into the USPTO records to integrate data from the Patent Examination Data System and public Patent Application Information Retrieval (PAIR) system.

In the 4G portfolio, 38 attorney, agent or firm listings were disclosed across the 663 US patents. Figure 9 shows the firms that handled more than 10 patents.

During the research process, one data string in the list caught our eye: “Docket Clerk/HTCL”. What did this stand for?

Although we have not checked all 40 instances of the patent data disclosing “Docket Clerk/HTCL”, we believe from sample testing that there is a high possibility that “HTCL” here stands for Huawei Technologies Co, Ltd. In other words, the patents were handled by Huawei in-house.

Based on this working assumption, Huawei’s in-house team handled 130 US patents in the 4G portfolio (19.6%) – the second highest amount of any firm.

Four firms contributed to more than 60% of the cases where a 4G patent was graded A or higher:

In the 5G portfolio, 28 attorney, agent or firm listings were disclosed across the 796 US patents. Figure 11 depicts the firms that handled more than nine patents, including Futurewei, which is a subsidiary of Huawei. Using the same working assumption mentioned previously, we found that besides the external patent firms, Huawei handled 120 US patents itself, constituting 15.1% of its 5G portfolio.

As discussed earlier, the overall quality of 5G is better than 4G. Similarly, our research reveals that almost all of the patents across all of the attornies, agents or firms improved in quality in the transition from 4G to 5G, including those of Huawei’s in-house team (listed as either Huawei Technologies Co, Ltd or Docket Clerk/HTCL). In addition, although Huawei decreased the total number of patent firms from its 4G (38 firms) to 5G (28 firms) portfolios, most of its SEPs continued to be handled by Leydig, Voit & Mayer, Ltd and Slater & Matsil, LLP.

Further, only eight attorney, agent or firm listings were disclosed across the 81 US patents in the 5G+ portfolio and Figure 19 shows that Slater Matsil, LLP/HW/FW/HWC handled 48 of these – 59.3% of the portfolio. However, the top firm listed in both of the 4G and 5G portfolios, Leydig, Voit & Mayer, Ltd, did not appear in the 5G+ data set.

Table 7. Countries where Huawei’s 5G+ inventors are based 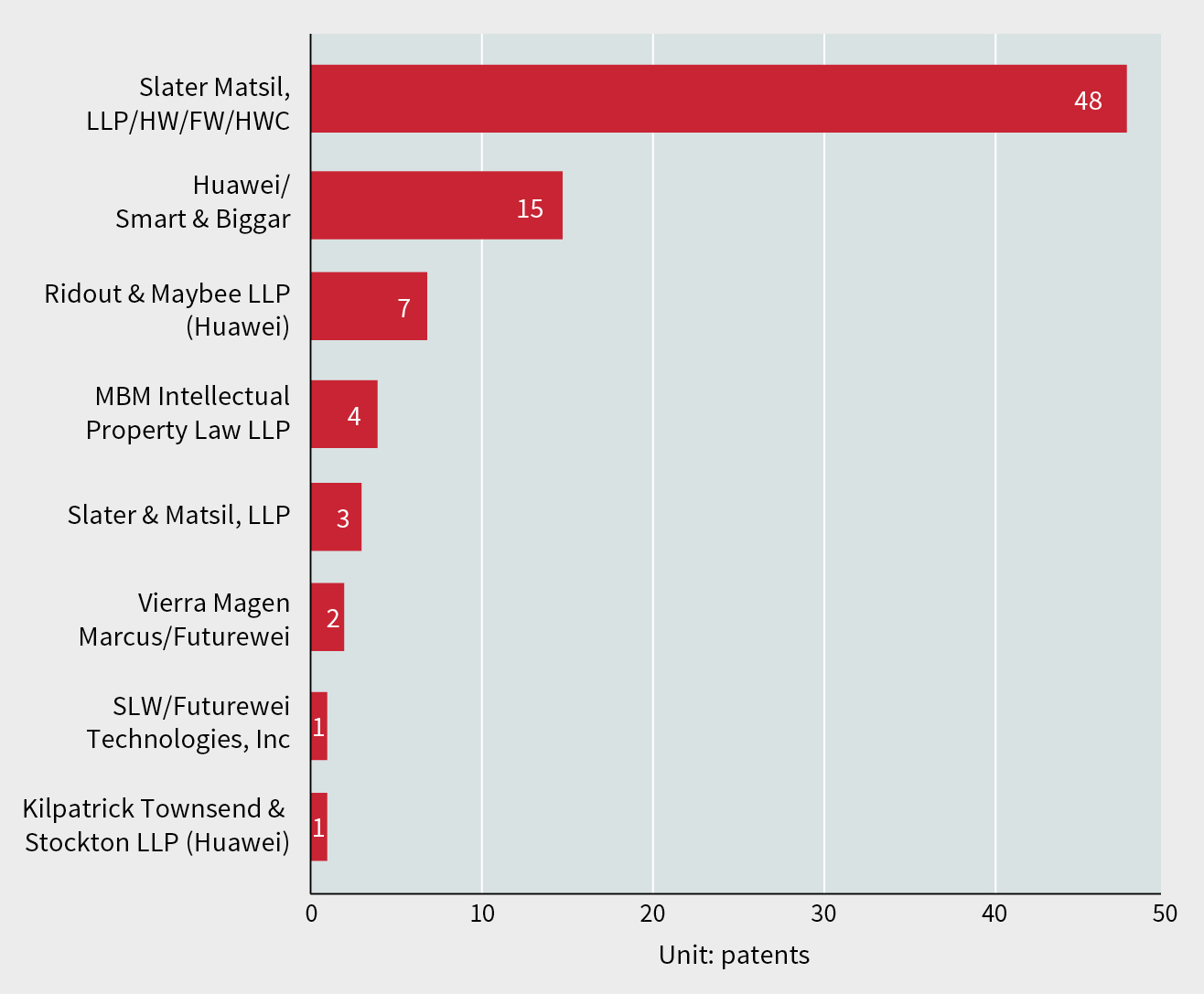 A step up in quality

As mentioned at the beginning of this article, patent quality reflects the patentability requirements under patent laws and regulations. Using Patentcloud ratings, we found that Huawei has improved the quality of its SEP portfolio significantly during the evolution from 4G to 5G.

We have tried to determine the reasons for this by examining the correlation between patent quality and three key factors relating to priority, inventor and patent prosecution firm.

However, while the data spoke for itself, this should not be considered the end of the story.

To support the business decisions of each stakeholder in the patent ecosystem, it is crucial to develop a convincing and reliable theory and methodology, as well as convenient online tools, to decipher the quality and value of patents. If – and only if – the quality and value of a patent can be evaluated transparently and quickly, then the patent world will be revolutionised.

The key takeaways from this study are as follows: