The Brazilian National Institute of Industrial Property (INPI) is tackling a tremendous patent backlog, which has hampered the functioning of the patent system and discouraged investments in R&D and innovation for many years. With support from the Brazilian government, INPI has adopted a number of measures to reduce this backlog.

On 8 January 2019 INPI announced a partnership with CAS (a division of the American Chemical Society that specialises in scientific information solutions), which aims to improve the efficiency of the examination process and accelerate pending application processes.

CAS will apply data from its human-curated content collection in a new AI solution. The technology combines scoring similarity, workflow classification and knowledge-space exploration capabilities that will provide INPI’s patent examiners with reliable prior art documents in the technological field, as well as previously published information that may be relevant. It will help examiners to evaluate novelty and inventive step requirements and therefore speed up the examination process.

Accelerating the examination process is of extreme importance. Liane Lage, director of patents, software and topography of integrated circuits states that:

addressing the timeliness of application processing at INPI is a top priority for the examination function. We think CAS’s technology can help our examiners during the examination of patent applications in chemistry and all other technical fields.

CAS has a great deal of expertise in the field of chemistry technology. For example, the SciFinder tool is a research discovery application that provides integrated access to the world's most comprehensive and authoritative source of references, substances and reactions in chemistry and related sciences.

According to Yingqi Wu, CAS’s senior manager of business analytics and insight:

as soon as patent applications are published, 18 months after the filing date, CAS scientists initiate the process of curating data from the patent into the Enterprise Big Data Hub. This curation includes indexing the full text of the patent, as well as collecting all examples and key claimed entities, such as chemical substances and inventive concepts. 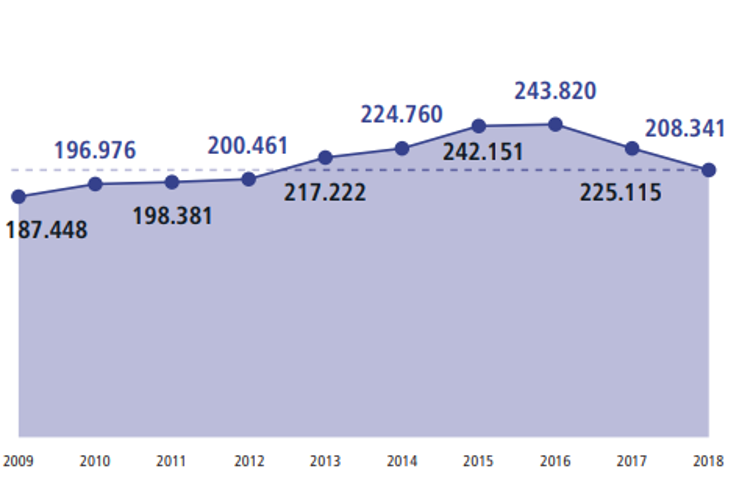 The same report shows that the average decision time for patent applications in Brazil is 10 years. Figure 2 depicts the differences in backlog in INPI’s main technical divisions.

Patent applications pertaining to pharmaceutical and telecommunication patents have the highest backlog – 13.13 and 13.04 years, respectively.

INPI’s partnership with CAS is just one of the measures that it has adopted over the years. Others include increasing the number of examiners, optimising internal procedures, improving IT systems and implementing remote working and the highly successful Patent Prosecution Highway programmes.

This is the first time that CAS has collaborated with a patent office and – considering the data provided – has what it takes to be a successful partnership. It will hopefully help INPI to beat one of the biggest patent backlogs in the world.