Back in the old routine

After several years of decline, the indications are that the patent transactions marketplace is getting more active again in 2014, with big corporates in the United States and Asia leading the way

In the last 10 years, the sale of patent assets has become an important way to monetise portfolios and balance IP positions due to converging industries. As computing has moved from the server to the desktop to the mobile device to the wearable device, the landscape of IP rights has changed dramatically. Web services and cloud computing are another example of how technology convergence has profoundly altered the landscape of industry leaders. There are many new players in the market, while other companies have lost the influence that they once commanded. Corporate patent monetisation efforts amid constant budget pressure and active portfolio management are fuelling the transactions market. At the same time, funding from the sale of IP assets has improved capital access for small entities, inventors and universities.

Market trends can be difficult to access and understand because most patent deals are confidential, numerous assignments are recorded under shell entities and many transactions involve mergers, acquisitions and security transactions, or are otherwise distinct from a transaction that purely involves the transfer a set of assets from one entity to another.

To better understand the patent marketplace, AST has studied the 1,419,268 patent assignments that were recorded at the US Patent and Trademark Office between January 2010 and June 2014. Not all transactions are recorded, so the actual number of transactions is likely larger than our study. Each assignment is analysed by a team of researchers to eliminate those related to M&A, business unit sales, inventor to company, security, liens and name corrections, leaving those that reflect a pure patent transaction. The next step was for assignments to be consolidated into a single transaction and then for assignee/assignor names to be unified to parent entities. The data was then further analysed by classifying entities by type of business, revenue and locations of the companies involved, as well as the technology of the patents transacted.

Figure 1. Number of transactions and US patents by year

Since 2010, more than 3,709 patent transactions have been identified involving 68,430 US assets, 2,476 sellers and 1,517 buyers. With this volume of data, AST has identified several interesting trends.

Figure 2. Number of transactions by category* 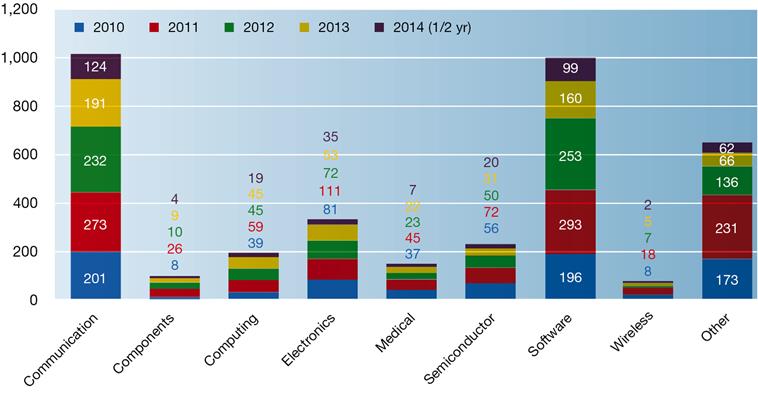 *One category per transaction

The high-tech industry accounts for the majority (78%) of patent transactions since 2010. Over 60% of 2014 transactions contained assets related to communication and software technologies. Seventy percent of communication transactions were purchased by ‘patent holding companies’ – which we define as companies that make no products or services, such as non-practising entities and patent aggregators. Patent holding companies are also active in the semiconductor and software industries. More than 1,000 transactions relate to software technologies, with Intellectual Ventures a buyer in 33% of these purchases. Over 30% of assets in the ‘other’ category pertained to transactions related to the automotive industry.

When we look at the same data analysing the number of assets for each industry category (Figure 3), it reveals that communication assets are the most transacted assets. Several large operating companies are major sellers of these assets, such as Nortel, Hewlett-Packard, Panasonic, Ericsson, Kodak, IBM and Micron.

The Nortel Networks sale of 3,741 patents to Rockstar Consortium for $4.5 billion in 2011 is the largest patent sale in our study, in terms of both price and number of assets. The second largest patent transfer occurred in 2010, when 3,434 patents were transferred from Micron to Round Rock.

Some of the notable transfers of the first half of 2014 include: 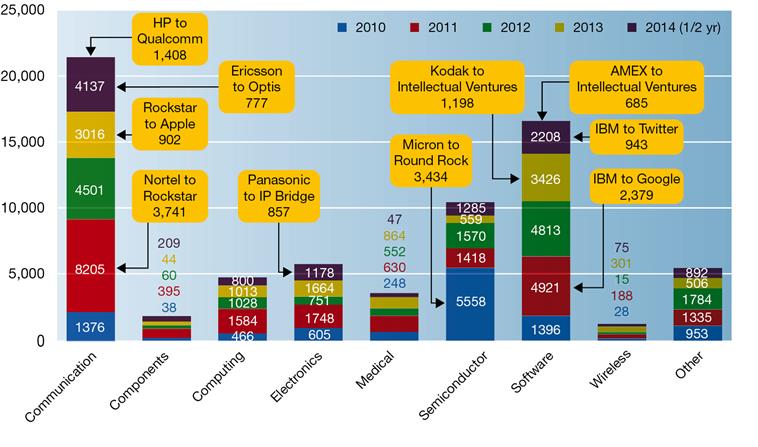 *One category per transaction 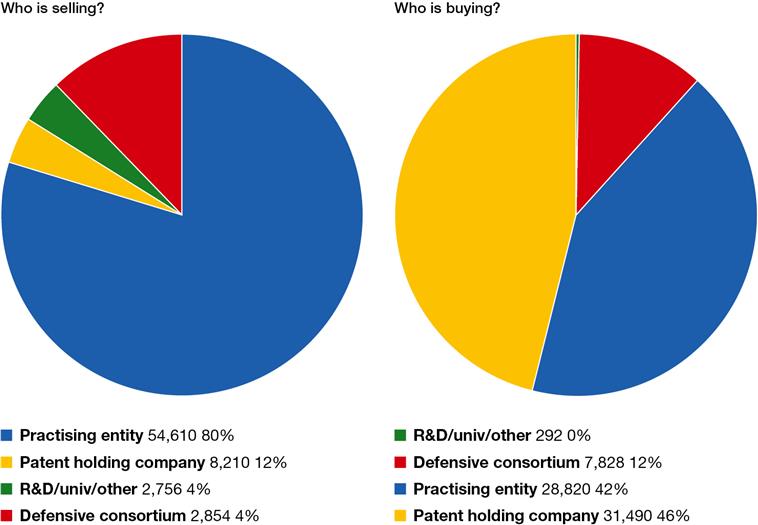 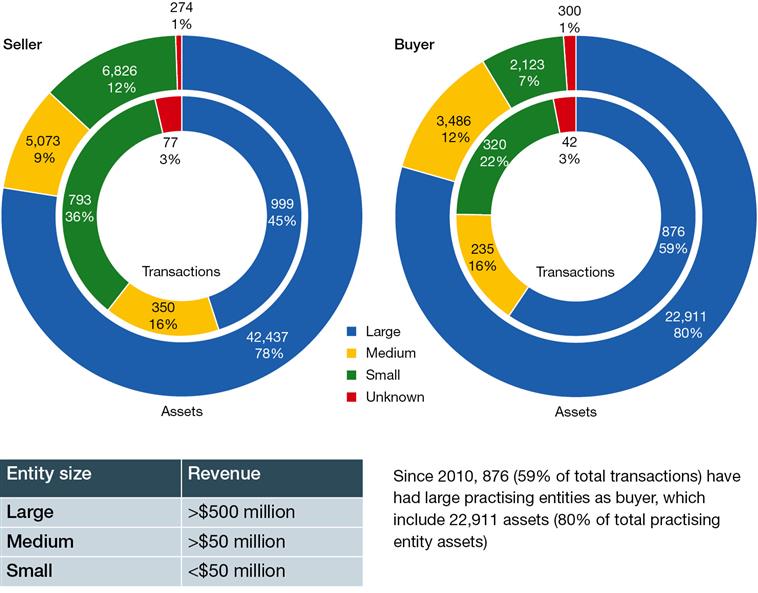 US patents most valuable

Generally, the fact that US patents are considered more valuable compared to other geographic counterparts is probably due to the litigious nature of the market, but the companies involved in the transactions are located worldwide. As shown in Figure 6, North American practising entities are the most active sellers and buyers with over 65% of transactions. Asian companies are now responsible for more than half of the patent filings worldwide, but historically they have not monetised their portfolios. However, our study indicates that the year-on-year ratio of divested assets by Asian practising entities is growing at a steady rate. Asian companies sold four times more assets in just the first half of 2014 than they did in all of 2010. The number of sale transactions has also doubled in recent years; and with the rising number of patent offerings from Asian companies on the market, we expect the ratio to increase further. 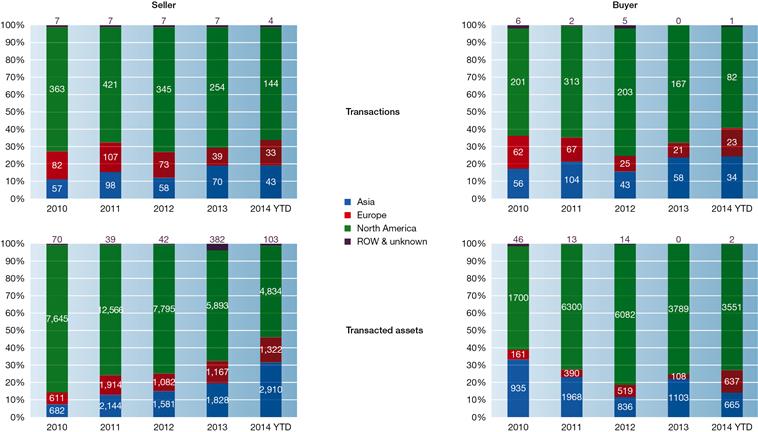 Table 1 shows that 10 of the top 15 sellers are practising entities. IBM is the biggest seller, with over 6,111 assets or 11% of all transacted assets in 57 transactions since 2010. Eleven IBM transactions have involved more than 100 assets, including a transfer of 2,379 patents to Google. Sellers such as AT&T and Nokia are involved in smaller transactions. Twenty-four of 35 AT&T transactions involved under 10 assets. Allied Security Trust, with its ‘catch and release’ model, has been involved in 29 sales, including many of the assets purchased by the firm since 2007.

Table 1. Top 15 sellers since 2010 by number of transactions

Table 2 shows the top 15 sellers of 2014. Panasonic, Hewlett-Packard and IBM are the leaders, with over 1,000 patents sold in the first half of 2014. Over 90% of all assets sold by Panasonic since 2010 were transacted in the first half of 2014, so it is gearing up its sales efforts. Panasonic continues to push many portfolios on the market, leading us to believe that it may become the biggest seller of the year. Hewlett-Packard has been divesting patents for several years, but 2014 has seen the highest number of assets transferred, with 1,430 US assets in three transactions. In the period being examined, Intel and Dongbu HiTek have had their first transactions as sellers in 2014.

Over 90% of all assets sold by Panasonic since 2010 were transacted in the first half of 2014, so it is gearing up its sales efforts

Unsurprisingly, most of the leading practising entity sellers in the list have a large patent portfolio on which they have based their sales efforts. With a changing market landscape and financial constraints, these large portfolios have provided surplus assets which have become a potential revenue source. Paring off unneeded assets can also help IP departments to reduce portfolio maintenance costs. In recent years Asian companies such as Panasonic and Renesas have become more aggressive in divesting assets. We expect other Asian companies to join them, resulting in even more patent transactions in the coming years.

Table 3 shows the top 15 buyers since 2010. Of the top 15 buyers, nine are patent holding companies, which acquired 37% of all transacted assets. Leading the patent holding companies, Intellectual Ventures is by far the biggest buyer, with over 10,743 assets acquired in 941 transactions since 2010. Patent aggregators such as RPX, AST and OIN – which purchase assets on behalf of practising entities – are also significant buyers, with 168 transactions involving over 2,700 assets. Other active patent holding companies include Acacia, Conversant, Intellectual Discovery, Tessera and Wi-Lan. Korean patent aggregator Intellectual Discovery – which is one-third funded by the Korean government and two-thirds by the private sector – had its most active year in 2013, when it made 25 of its 36 purchases since 2010.

Among practising entities, Google has been the biggest buyer, with 4,680 assets acquired in 96 transactions. The Motorola transaction is excluded from the analysis because it was a company acquisition. Samsung and Apple have also purchased many assets, mostly related to communications and consumer electronics. It is easy to imagine that their ongoing litigation has fuelled many of these purchases. Japanese company Rakuten went on a buying spree, with 25 patent transactions in 2012 and 2013. Rakuten is rapidly expanding worldwide and appears to be aggressively filling IP gaps in its portfolio, making purchases from sellers such as AT&T, NEC, Panasonic, JVC Kenwood, universities and others.

Table 4 lists the top 15 buyers with the most transacted assets in the first half of 2014. Six of the 15 are first-time buyers – Optis, Twitter, IP Bridge, Sound View Innovations, Future Link Systems and Intelligent Energy. There were 145 new buyers in 2014, purchasing 4,814 total assets. Intellectual Ventures has had more transactions (62) in the first half of 2014 than it did in all of 2013. Optis, a patent holding company, has acquired portfolios from Ericsson (777 assets), Panasonic (169 assets) and LG Electronics (83 assets). The true identity of Optis is unclear, but it is a New York-based limited liability company at the same address as Highbridge Capital Management, a $2.5 billion hedge fund.

Table 5. Top 15 transactions by number of transacted assets since 2010

The sale of an asset is not the final step in its life. What happens next is also worthy of study. Some buyers are likely acquiring for defensive reasons – whether an organisation such as AST, OIN, Intellectual Discovery or RPX, or a similarly minded practising entity acquiring for its own defensive needs. However, others acquire to monetise the assets. Of all transacted assets in our study, 1,570 US patents were involved in 4,393 unique patent litigation cases. Eighty-seven percent of these litigations or 75% of the litigated patents were acquired by a new entity prior to suing. Litigations involved 541 unique plaintiffs, the majority of which were non-practising entities litigating against 2,329 defendants where most were practising entities. Table 6 shows the list of top 15 plaintiffs and defendants in litigations involving assets acquired prior to suing.

Some names that appear in the list are also on the list of most active sellers (eg, AT&T and Hewlett-Packard). It is worth any practising entity that plans to sell IP assets considering to whom it is selling and for what purpose. Are large practising entities contributing to the number of litigations that their industry ultimately faces?

In summary, several conclusions can be drawn from our study. First is that after several years’ decline, 2014 has the potential to be the most active year in history in terms of both the number of transactions and the number of transacted assets. Second is that most sellers are practising entities, with larger companies being especially active. The most active buyers are patent holding companies, with some buying to fuel their own licensing and litigation activities. Third, after many years of being quiet, Asian sellers are becoming significantly more active. The Asian market deserves further study.

The secondary market remains a popular way to unlock value from under-utilised IP assets and there are a few key points about its operation that are well worth remembering: