With intellectual property now recognised as a major component of corporate value, the need for an accurate and widely accepted patent valuation method is more important than ever

Patent valuation is becoming increasingly important as revenue generated from intellectual property continues to grow. Although there are several well-known methods for patent valuation – including the income approach, cost approach, market approach and option approach – it can be difficult to apply these in practice. This is largely due to the fact that there is insufficient empirical data to support these methods and they rely too heavily on subjective factors.

This article offers a new method – the patent valuation system – for estimating the profits generated by patents based on existing industry financial data and patent data, in order to minimise the subjective analysis involved. This method can be combined with any valuation method that requires an estimate of the expected returns generated by patents. Comparisons between the values generated by the patent valuation system and real-life values of actual patent transactions are carried out in order to gauge the system’s accuracy.

Currently, the income approach and the option approach are the most widely used patent valuation methods. These use the returns generated by patents to determine value. However, there are many difficulties in estimating patent value using these approaches (eg, estimating the portion of profit attributable to the patent). This article introduces a new and innovative method of computing this portion of profit automatically, using existing financial and patent data along with the discounted cash flow (DCF) model (one of the income approach models). To test accuracy, actual patent values generated by this method are compared against publicly available patent values.

The existing patent valuation methods may not be suitable for all types of patent owner. For example, the income approach calculates the value of a patent based on the profit generated by the patent owner from manufacturing and selling products incorporating the patented technology. However, many patent owners today do not manufacture and sell products at all, making this approach inapplicable. Further complicating the issue, many patent owners that do manufacture and sell their own products not only generate income from the products they sell, but also receive royalty income from other manufacturers whose products incorporate the patented technology. The traditional income approach also fails to account for this added revenue.

Another issue relating to patent ownership is that an owner’s management practices concerning its patents can significantly affect their value. For example, if the patent owner mortgages its patents and defaults, the bank financing the loan may try to sell the patent for debt recovery at the value calculated by the original patent holder. However, a potential buyer may not accept this value unless its own considerations are also taken into account. Thus, the sale price from such a liquidation sale can diverge substantially from the actual technical value of the patents. Such subjectivity makes accurate patent valuation extremely difficult.

Even if profit data for actual products incorporating the patented technology is available, only a portion of the profit is actually attributable to the patent. Many other variables – such as marketing efforts or manufacturing efficiencies – can contribute significantly to the profit from a particular product. Also, multiple patents may cover the various technologies incorporated into a single product, requiring the portion of profit attributable to patented technologies to be split further. In most cases the patents covering the technology in a particular product include not only those owned by the manufacturer itself, but also patents belonging to competitors or non-practising entities. Further, a single patent may cover technology used in many different products. In such cases the profits from several different products, perhaps from many different manufacturers, must be combined. As a result, determining the value of a single patent becomes extremely complicated.

Because an accurate patent evaluation must account for future revenue generated by the patent, there will likely be a subjective component in projecting future profits. Future profit projections are normally determined by the patent owner, so they are often exaggerated.

In view of the difficulties in objectively assessing patent value as described above, any accurate, objective method must take into account the entire industry for the sector to which the patented technology is relevant and all participants – both manufacturers and patent owners – in that industry.

The new method, described in more detail below, does just that. It takes account of the market size, the total profit generated by all participants in that market, the total number of applicable patents and the technology lifecycle in that industry, while minimising the subjective variables from the analysis.

More specifically, the market for the target patent is defined using the data from all patent owners which are active in the market. The market size and profit from the market are then estimated using these entities’ financial data. From the total estimated market profit, the portion of profit attributed to all patented technology is then computed and divided among each patent, depending on the individual score assigned to each patent. The effective valuation period of each patent is then taken into account, which may vary from the patent’s legal lifespan of up to 20 years. Finally, the DCF method is applied to generate a patent value. Figure 1 summarises this method.

Any accurate, objective method must take into account the entire industry for the sector to which the patented technology is relevant and all participants – both manufacturers and patent owners – in that industry

To see whether market size can be estimated using market participants’ patents and financial data, we examined the correlation between the number of patents (number of live patents or number of filings) and the revenue of companies using statistical analysis.

Table 2. The 10 industries with the highest correlation between live patents and revenue (see Table 4 for a complete listing)

About 89% of the 87 industries with 10 or more patent filings per year show a Pearson correlation coefficient greater than 0.3. Thus, one can conclude that there is a strong correlation between the number of live patents and revenue for the companies that comprise this 89%.

Table 2 shows the 10 industries with the highest correlation between the number of live patents and revenue, including the total number of companies per industry and the Pearson correlation coefficient.

Based on this analysis, it is safe to say that market size can be estimated using market participants’ financial and patent data. However, this valuation method may become unjustifiable for industries with weak or inverse correlation.

The patent valuation system uses the patent classification code of a target patent to define the market. Patent classification codes are part of a standardised system, which classifies patents based on the areas of technology to which they apply. The system also aggregates all applicant names from all patents that belong to the same patent classification as the target patent to compute the average revenue per patent using financial data and patent data. This figure is then multiplied by the total number of live patents in the market to estimate the market size. Total market profit is estimated using market size and by averaging all participants’ net income after tax.

Table 4. Industries with the highest correlation between live patents and revenue

Market profit attributable to each patent

The amount of each patent’s contribution to market profit can be obtained by dividing the total profit contribution of all patents by the total number of patents in the market.

However, each patent’s relative contribution to market profit can vary (some patents may be more important than others), so that each patent’s evaluation score is used to account for such variance. Many commercial database providers make available patent evaluation scores. The patent valuation system uses scores provided by ActionablePatents.com.

Although the legal life of a patent can be up to 20 years, each technology has its own lifecycle, so the practical value of the patent may not extend to the end of its legal lifetime. To measure the effective technology lifecycle of a patent, this article extracts citation relationships between all patents in that technology area, using a median value of the time difference between cited and cited-by patents’ filing dates. The patent’s future contribution to market profit is then computed using the DCF model.

An example is set out in Figure 2 to illustrate this methodology.

Let us assume that nine companies (A to I) are participating in the smartphone market. Of these, A, B, E, F and G have publicly available financial data, whereas C, D, H and I do not. The rectangle reflects the smartphone market size for a specific year. Each company’s respective revenue for that year is depicted by the size of its plane. 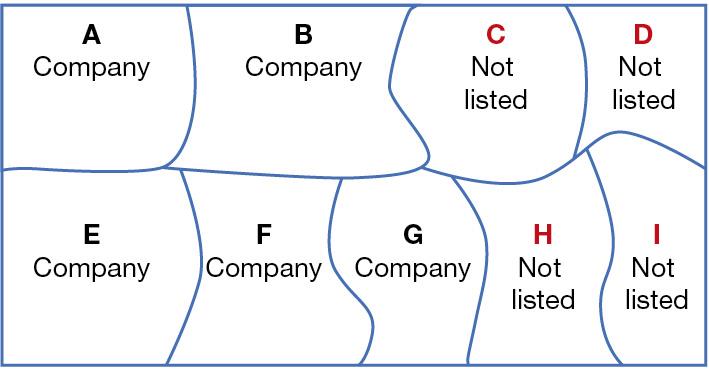 If the average net income after tax ratio for A, B, E, F and G is PR, then market profit, P, can be calculated as follows:

Market profit generated by all patents

The patent valuation system calculates the ratio of total number of patent inventors to total number of employees per company – excluding top and bottom values – to obtain an average value CR. Market profit generated by patents C can then be calculated as follows:

Table 3 (p63) compares the publicly available actual selling price of a patent and the result for the same patent as determined by the patent valuation system. We used the US Patent and Trademark Office Patent Assignment Database and ActionablePatents.com to compile a list of traded patents. However, the number of publicised traded patents did not match the database exactly. For comparison purposes, the price calculated by the patent valuation system was scaled up or down based on the number of patents in the publicised sales.

As companies seek to generate more value from their IP assets, the need for a widely accepted system of patent valuation is greater than ever. Some of the difficulties facing such a system are:

The patent valuation system method attempts to tackle these three challenges by taking into account: