AI may be the solution to skyrocketing numbers of SEP declarations

SEPs are on the rise, the number of annual newly declared patents has almost tripled over the past five years; there were 6,457 new declared patent families in 2015 compared to 17,623 in 2020 (see Figure 1).

The 5G standard alone counts over 150,000 declared patents since 2015. Similarly, litigation around SEPs has increased. One of the driving factors of recent patent litigation is the shift in connectivity standards (eg, 4G/5G, Wi-Fi) that in the past were mostly used in computers, smartphones and tablets, are now increasingly implemented in connected vehicles, smart homes, smart factories, smart energy and healthcare applications. Another reason why litigation may rise further is the belief that large SEP owners such as Huawei and LG Electronics may soon sell parts of their SEP portfolios, which may likely end up in the hands of patent assertion entities (PAEs). In a statement in April, LG announced it would close its mobile phone business, after suffering years of declining market share. Given that it is among the top 10 worldwide SEP owners, many market experts fear that LG may change its licensing strategy around SEPs, for example, by more aggressively commercialising its own SEPs, or selling its portfolio to PAEs or other market participants.  Huawei could also soon change its SEP licensing approach; due to the US ban on the company, SEP commercialisation in the United States will become increasingly important. That said, a situation where Huawei is no longer selling smartphones in the United States would make it a pure out-licensing company, which some would class as an NPE.

One way or another, it is anticipated that the majority of patent holders will actively monetise their SEPs covering standards such as 5G, Wi-Fi 6 or VVC in this fast-moving, high-investment environment. Any company adopting these standards must decrease operational risk and expense exposure by taking a proactive strategy towards SEPs rather than a reactive one. However, many of the businesses that will adopt standards subject to SEPs have little expertise in negotiating SEP licences. Here, understanding the overall SEP landscape is critical for smooth standard adoption, maintaining profitability and protecting the capacity to sell new products and services with enough access to third-party patent rights.

Standard-setting organisations (SSOs) such as the European Telecommunications Standards Institute (ETSI), which specifies 4G/5G standards, encourage developers to declare any patent that could potentially be essential for standards. While a few declaring companies conduct claim charts before declaring patents, most declare potential patents with no in-depth analysis. In addition, companies often submit declarations when patents are yet pending and the standard is still evolving. Thus, patent claims as well as standards specifications are subject to change after the initial declaration. As a result of this practice, some of the declared patents end up being non-essential. However, publicly self-declaring all potentially essential patents for a given standard is an important part of the FRAND obligation and should not be called “over declaration”. Still such patent declarations must not be confused with verified SEPs.  For example, only between 20% and 47% of all ETSI declared 2G,3G and 4G patents are essential according to Unwired Planet v Huawei and TCL v Ericsson. Some experts claim the essentiality rate to be even lower. These numbers confirm that the determination of SEP essentiality is needed for the ETSI declaration database. Other declaration databases such as the Institute of Electrical and Electronics Engineers (IEEE), which specifies Wi-Fi, and the International Telecommunications Union (ITU), which specifies HEVC/VVC, allow patent owners to submit so-called blanket declarations, where declaring companies must not declare specific patent numbers but only submit a blanket statement without any further details about potentially essential patents. However, these databases provide no information about the magnitude of SEP ownership across companies. In other words, there is no transparency about a declaring company owning just a single SEP or several thousand SEPs.

To summarise, there are two big problems. Not all declared patents are essential and not all essential patents are declared. Consequently, patent declaration data needs refinement, filtering, and a feasible SEP determination metric.

In the past, SEP essentiality determination was solely conducted by subject matter experts (SMEs) who mapped and charted patent claims to standards sections. However, there is no practical way for SMEs to determine patent essentiality for large numbers of declared patents. IPlytics counts over 300,000 world-wide declared patents. One of the major challenges when negotiating SEPs licences is that there is no public database with information about verified SEPs. SSOs do not determine whether any of the declared patents are essential, nor are the declarants required to provide any proof or updates. As a result, over the course of licensing negotiations, patent acquisitions or litigation, the question of which patents are essential and which are not, is one of the most debated.

Can AI predict essentiality for SEPs?

AI has started to support the process of understanding how patent claims relate to specifications for standards such as 3G, 4G, 5G, Wi-Fi 6 and VVC to determine essentiality rates of larger SEP portfolios without spending weeks or months and staggering sums of money on manual reviews by technical SMEs and counsel. The industry is well aware that experts spending significant amounts of time on claim mapping are currently more accurate than AI prediction models. Here patent claim construction is a very complex undertaking, and it needs the expert’s abstract understanding of the technology. AI SEP determination is not yet intended to replace experts, but to support them when manual claim charting is economically unfeasible.

One example of an AI-based SEP prediction model being used today is to allow a patent portfolio manager to understand how a portfolio including thousands of self-declared SEPs compares to a similar sized portfolio of a competitor.

AI-based SEP determination is an economically feasible and objective way for both licensors and licensees to get an indication of the rate of essentiality for a given SEP portfolio. Further, patent transaction managers often have to make decisions around acquiring a patent portfolio before a more in-depth manual analysis is feasible. AI models are useful as a first step for understanding a patent portfolio’s relation to a given standard.

Finally, in patent litigation, AI models have started to support the estimation of the denominator in a top-down approach. A recent poll taken in an IPlytics public webinar asked 244 industry experts if they thought AI-based patent essentiality algorithms could support SEP determination as an additional data point; 85% responded that they thought it could (see Figure 2). 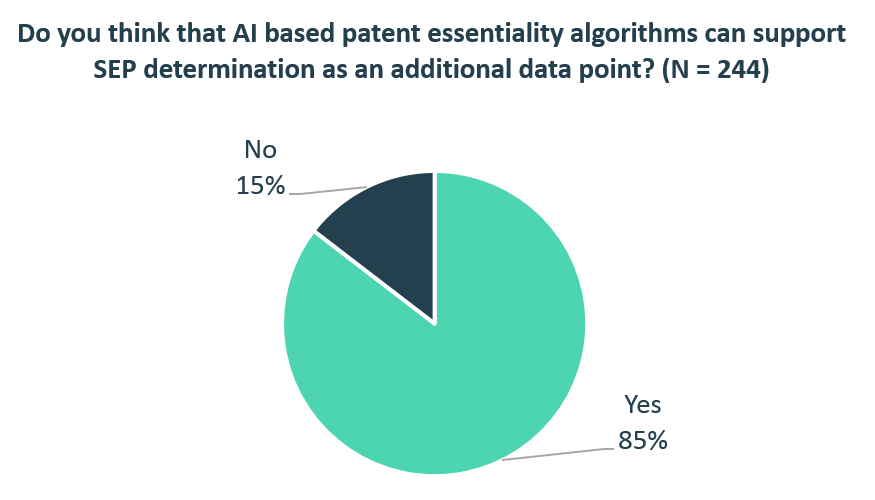 Such results confirm that the industry is open to using AI to determine the essentiality of SEPs, and that new solutions are desperately needed, not only to solve lengthy SEP negotiations and expensive litigation but also to allow a more proactive approach to risk management for companies that will make use of the standardised technological advances of 5G, Wi-Fi 6, VVC in their products. IP professionals as well as directors in standards development should bear in mind some key considerations: