In this co-published piece, Haseltine Lake Kempner’s Kimberley Bayliss takes a practical look at different types of AI inventions and how to formulate claims for each category in view of the EPO’s patent eligibility requirements

At the EPO, AI inventions may be deemed technical and, therefore, patent eligible in two ways or dimensions:

The AI inventions that come across my desk generally fall into one of the following categories. 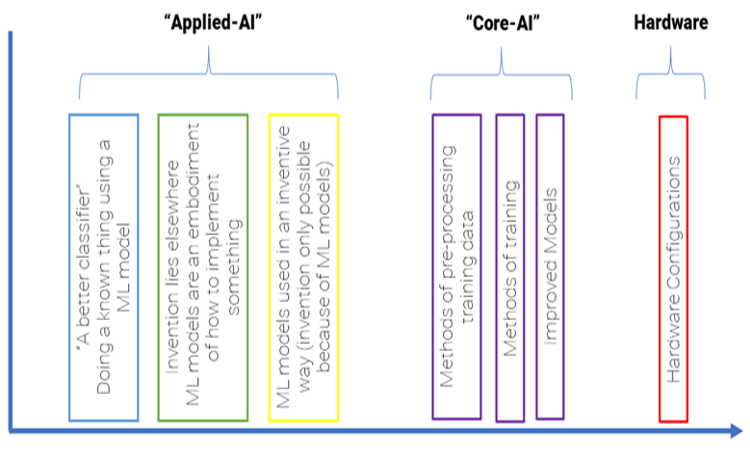 The x-axis of this figure might be thought of as “degree of abstraction from the processing of the computer”, with runtime inventions lying toward the left and hardware inventions to the right. It also (coincidentally) corresponds to likely degree of complexity to the patent attorney writing the application, with more complex applications also tending towards the right of the figure.

At the far left of the figure sit the Applied-AI inventions. These are where the invention lies (as the name would suggest) in the manner in which a known AI algorithm is used. These correspond to the second of the EPO’s two dimensions – inventions that the EPO considers technical by means of “adaption to a field of technology”.

The blue box represents inventions that amount to “a better classifier”. For these inventions, machine learning may be used to improve or automate known processes. Classifying medical images as containing lesions based on a corpus of annotated training images would be an example of this kind of invention.

The green box represents inventions where AI is incidental to the invention and merely one way that the invention might be realised. For example, the invention might involve a step of predicting, in which case the predictions may be made using a machine learning model (but might also be performed using other methods). For inventions of this type, AI is an implementation detail, but not the main invention.

The yellow box represents perhaps the most interesting inventions that, whilst not representing improvements to fundamental AI algorithms, are only possible because of the advent of AI. Real-time camera effects and interactive filters are a good example of inventions of this type. Others include models for performing robotic surgery or self-driving vehicles.

Attorneys working in life sciences or other lab-based fields may think that their inventors are unlikely to ever make a Core-AI invention. However, I would caution against this assumption, as many that we see arise from real-world problems that inventors encounter when trying to apply known techniques to their particular data.

As an example, an inventor might say: “My dataset was too small, so I just reformatted the data to improve the learning of the model… .” If the same technique can be used on other small datasets, then this is a Core-AI invention.

Another practical example is advancements in federated learning which arise due to organisations needing to pool their datasets in order to train a model, without wanting to actually share the underlying data directly.

Finally, to the far right, the red box represents hardware inventions. These include AI algorithms specifically adapted to particular hardware configurations. In this sense, the design of the algorithm is motivated by technical considerations of the internal functioning of the computer.

TinyML (AI for Internet of Things devices) falls into this category and includes algorithms adapted to be distributed across multiple computing nodes or adapted to be implemented by devices having limited processing power and memory.

Inventions of this type correspond to the first of the EPO’s dimensions, inventions that are technical by virtue of being adapted to a specific technical implementation.

Dependent on where your invention sits on the spectrum above, you will need to draft different types of claims.

This is where the EPO is more likely to raise patentability issues, in particular mathematical method objections. These inventions should be treated with care.

In the first instance, the independent claims might usefully be directed to the mathematical method itself, irrespective of any field restrictions. This ensures that the application offers the applicant the widest number of options in prosecution, particularly if the application will also be prosecuted in other jurisdictions having different patent eligibility requirements to the EPO.

With the EPO in mind, however, the dependent claims should contain specific use-cases of different, and preferably graded, scopes. Importantly a conversation should be had about the realistic scope that may be obtained for Core-AI inventions in Europe. If the applicant were required to limit to one or other of the use-cases, would the application still be commercially useful?

With this in mind, use-cases might be chosen that detail how the Core-AI invention could be applied to the applicant’s most commercially important AI models and products. They should therefore be chosen in a strategic manner, as opposed to merely relying on the use-cases provided by the inventors themselves. Building up a claim set in this way provides the best opportunity to obtain granted European patents that are commercially relevant for Core-AI applications.

The EPO has indicated that these inventions (red inventions above) are considered patentable subject matter. As the hardware is an integral part of the invention, the independent claims are likely to make some reference to a hardware configuration and the manner in which the algorithm is adapted for that particular configuration.

If you find yourself evaluating what amounts to “A better classifier” (blue inventions above), then you really need to be considering whether the invention will be considered novel and inventive.

Long gone are the days when the mere application of machine learning in a standard manner was seen as inventive. You will therefore need to ask whether the invention produces an unexpected technical effect: are there any other merits to the invention?

If you do decide to proceed, your independent claims might, for example, be directed to the training of the machine learning model or the use thereof.

The green and yellow categories are likely to be considered patentable subject matter by the EPO. For these, when drafting the claims, the question is whether the AI is central to the inventive concept. If the invention lies elsewhere (green box) and machine learning is just one of various ways of putting the invention into practice, then the AI embodiments will probably be described in dependent claims, if at all. For inventions which are only possible due to the advent of AI (yellow box), and the technical effect can’t reasonably be obtained without it, then the AI will more likely feature in the independent claims.

Thus, the spectrum above can be used for quick orientation and claim drafting with the EPO’s patent eligibility criteria in mind. Look out for part II of this article – which will be published later this month - focusing on drafting full specifications suitable for submission to the EPO for each of the different types of AI inventions described above.

This is the second co-published article by Haseltine Lake Kempner in the series on Patenting AI before the EPO. The first can be viewed here: