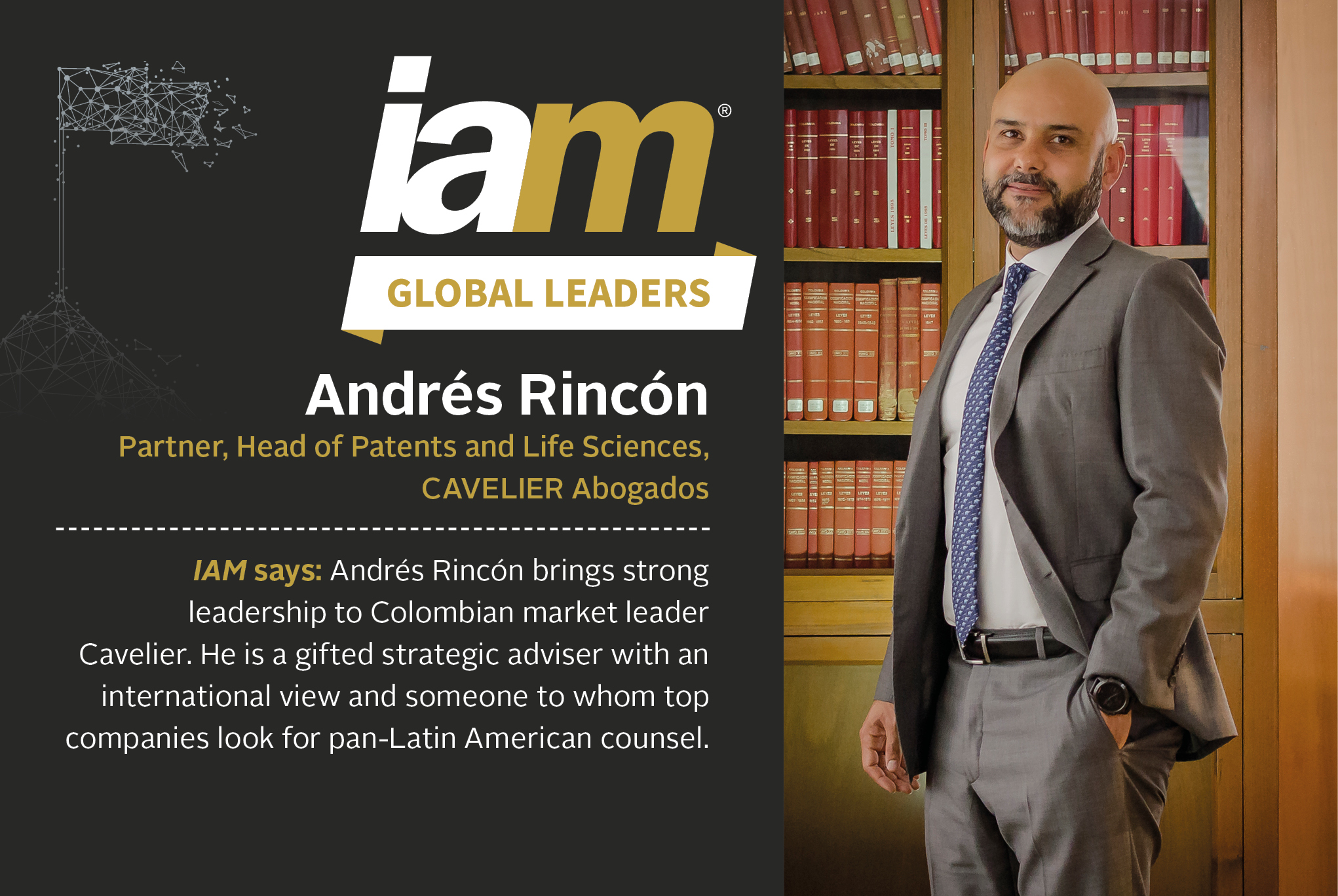 What led you to a career in IP law?

My passion for intellectual property started 20 years ago and has not stopped since. I began focusing on patents after I finished my master’s as part of the Max Planck Institute Munich Intellectual Property Law Center programme in Germany back in 2007. I had the privilege of learning about patent fundamentals and enforcement with a global perspective from the best in the field, including Professor Joseph Straus and former chief judge of the US Federal Circuit Randall Ray Rader, among many other prestigious practitioners and litigators from Asia, Europe and the United States. After that, I returned to Colombia and got involved with patent prosecution and enforcement, joining some of the most successful practices in the country, which quickly gave me the opportunity to represent clients before the Patent Office, as well as national and regional courts.

You have been described as “the go-to patent lawyer in Colombia”. What vital skills do you need to succeed in your role?

For many clients I am the “go-to patent lawyer in Colombia” not only because there are few professionals qualified as real patent advisers in the country, but also because I have developed the ability to understand technologies in multiple fields through the prosecution of more than 1,200 patent applications from filing to grant. What is more, I have successfully conveyed the scope of those rights in infringement and validity cases to national and international judges who do not always have a sufficient technical background or previous understanding of patents or even intellectual property. My approach to patents has always been practical and based on enforceability and freedom to operate, both from the patent owner’s and the alleged infringer’s perspective. I not only consider whether something is patentable, but also whether it is enforceable or easy to design around. That is why my team and I always draft patents and approach freedom to operate with a strategic perspective on exclusion and litigation.

What key considerations should patent owners bear in mind before pursuing enforcement action in Colombia?

When technical evidence of infringement is available, patent owners are in a privileged position if they pursue enforcement before the Colombian civil courts. This is not only because ex parte injunctive relieve is available, but also because they have a presumption over the validity of the patent that can only be overturned before an administrative court in separate proceedings where the patent owner has no burden of proof. This clears the way for the legitimate market exclusion of most the competition in a given sector where the patent scope allows it.

How do you promote knowledge sharing and/or IP awareness among clients and the wider community?

Intellectual property and patents are the most powerful tools towards effective technology transfer. When my clients create an invention, I make them aware of that, and they understand that they are transmitting their trade secret to the world, with the aim of obtaining market exclusion rights only in those jurisdictions where they decide to prosecute the patent and eventually obtain it. I also conduct pro bono work for those who cannot afford this sort of representation through WIPO’s Inventors Assistance Programme in cooperation with the World Economic Forum. I have contributed to the programme since its launch in 2017, providing local inventors with legal assistance to help them secure patent protection through qualified patent drafting and prosecution advice and representation.

How do you expect the Colombian IP litigation landscape to develop in the next five years?

The Colombian economy is gaining more prominence among Latin American countries and its IP and enforceability systems are improving alongside this. In the next few years, I expect the Colombian Patent Office to become one of the most sophisticated in the region, increasing the number of patents prosecuted and granted in the country, and therefore increasing the number of cases that reach Colombian courts, which are quickly becoming more specialised. The courts have implemented oral proceedings, which have started to show results, and I expect judges to become more aware of the importance of patents, their scope and their limitations. This would enable the country to become a top-tier jurisdiction for actual and potential clients choosing where to protect an invention.

Andrés Rincón is a partner at CAVELIER Abogados. He obtained an LLB from Universidad Javeriana, conducted IP post-graduate studies at Universidad Externado de Colombia and obtained an LLM in intellectual property from the Max Planck Institute and George Washington University through the Munich Intellectual Property Law Center programme in Munich, Germany. Mr Rincón deals with prosecution and litigation affairs for validity and infringement in various fields of technology, including pharmaceuticals, biotechnology and software implemented inventions, as well as having practical experience in both plant breeder's rights and industrial designs.