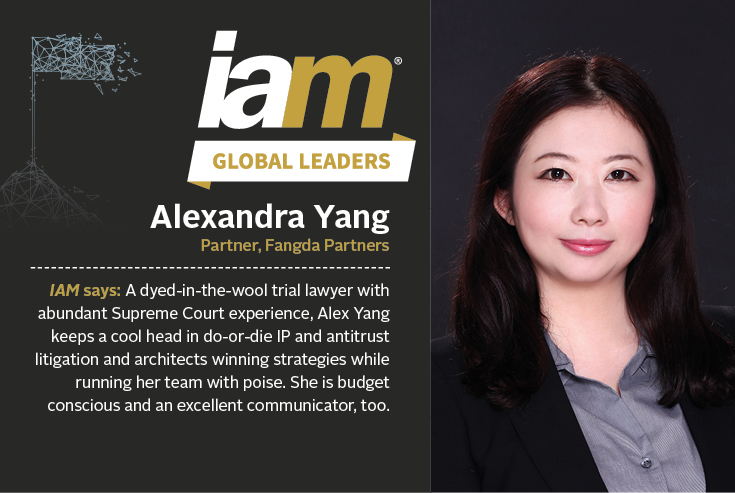 How did you first get involved in intellectual property?

I majored in chemical engineering before going to law school. My solid legal and technical knowledge along with my good communication skills made me well suited and prepared for patent litigation. When I started my practice, patent litigation in China was still in its primary stage, but I could see that technology and innovation would become increasingly important for competition between corporations and nations, which would lead to the development of IP protection and IP systems in China.

What skills do top-class patent litigators in China need to possess?

First, top-class patent litigators need to have a comprehensive and deep understanding of the law, the judicial system and the facts of the case to find the best strategy for clients. Second, it is important to know the client’s business goals. Patent litigation is part of a corporation’s business strategy, and a good litigator can help clients to achieve their business objectives through litigation. Third, top litigators should participate in shaping the law, especially in fields such as intellectual property, where laws are constantly developing. This requires litigators to see the whole picture of the domestic and foreign economic and political environment, to have the motivation to learn new skills and knowledge, to foresee trends in the field and to shape the law to benefit not only clients but also whole industries. Over the years, I have made tremendous efforts on this front and led many cases that have been instrumental to furthering the development of China’s patent and competition laws.

What have been the key developments in patent litigation in China over recent years?

In my opinion, the most important development is the enhancement of IP rights protection, which is reflected in many aspects. For example, for patent invalidation, the duration of a case has been reduced from more than one year to six to nine months. For civil cases, new laws and regulations have come into effect, providing detailed guidance on interim measures that are available during litigation, such as preliminary injunction, evidence preservation and interim judgment. Also, the courts tend to grant higher damages than before. Moreover, the courts have established a new technical investigator system to assist judges during technical disputes.

Is China ready to become a primary venue for globally important patent litigation?

Yes. China has established a well-developed judicial system for IP litigation over recent years, with new laws and regulations on various aspects of IP rights protection, specialised IP courts, a unified appellate system and well-versed judges. Increasingly more patentees, especially leading international corporations, have already turned to China for patent protection. In 2018 more than 20,000 new patent infringement cases were filed in China. Like the German system, China’s IP laws are more patentee friendly. For example, the duration of patent infringement cases is usually 12 to 18 months and permanent injunction is almost automatic if infringement has been found. As the Chinese courts are more open towards and more equipped in handling IP disputes involving international corporations and the Chinese market is one of the biggest in the world, there will be more global patent litigation in the future.

Which of the cases that you have been involved in are you most proud of?

The Apple v Qualcomm series of cases. I am lead counsel for Apple Inc in China for disputes against Qualcomm relating to Qualcomm’s SEP licensing scheme. Apple was challenging the legitimacy of Qualcomm’s business model to defend its rights and protect the downstream market from Qualcomm’s abusive activities. In addition to defending more than 30 patent infringement cases before more than 10 major IP courts, high courts and the SPC, we initiated the civil actions that covered a wide range of causes of action, including anti-monopoly action, FRAND and declaratory judgment of non-infringement. Qualcomm hired six Chinese firms for these cases. My team, being the largest patent litigation team in China, was the sole firm representing Apple. As one team, we had the advantage of better understanding the whole picture and were capable of developing and implementing consistent and novel case strategies. As a result, we successfully invalidated more than half of the patents in dispute and ultimately achieved a favourable settlement for the client. I truly believe that this is the trial of the century.

Alexandra Yang is a leading IP lawyer in China, focusing on IP and antitrust litigation. She is lead counsel for major anti-monopoly cases and FRAND cases in China, including Apple v Qualcomm and Apple v IWNCOMM. Further, the Supreme People’s Court (SPC) has recognised many of her cases as top IP cases. Ms Yang is a consulting expert for the SPC’s IP research centre and is frequently named a leading patent litigator by professional publications.