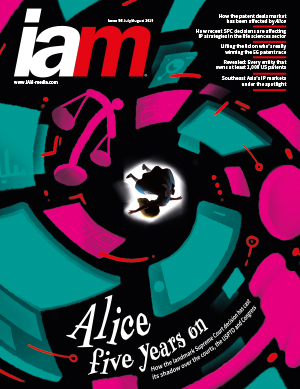 In the five years since the US Supreme Court’s decision in Alice Corp v CLS Bank International, patent owners, their advisers, the judiciary and legislators have all struggled to come to terms with its impact. With policymakers currently eyeing possible legislation on Section 101 of the US Patent Statute, the case continues to cast a long shadow on the IP market.

Toyota showcases the dynamism of IP strategy in the auto sector

The giant Japanese car company has opened up a significant portion of its patent portfolio for royalty-free use as it looks to push the adoption of hybrid engine technology.

Some of the major news stories carried on the IAM platform from March to mid-May.

What do recent SPC decisions mean for life sciences companies?

Supplementary protection certificates (SPCs) play an important role in the patent strategies of many companies in the life sciences sector, but a series of European court decisions has given IP in-housers food for thought when looking to obtain SPCs.

The rise of ADR in India

The use of alternative dispute resolution by some SEP owners is growing in India and offers firms an increasingly attractive method of settling IP conflicts in the country.

Determining which companies are leading the 5G race

A growing number of studies are attempting to lift the lid on which companies own the most 5G patents, but such reports do not always reveal the full picture.

Generating value from a portfolio does not mean revenue on the balance sheet for the vast majority of patent-owning businesses, so IP leaders must look for other ways to show the value that intellectual property brings to a company.

The IAM/ktMINE US Patent 1,000 counts down every entity that owns at least 1,000 US grants, with breakdowns by country and industry, to reveal the biggest movers.

The surprising impact of Alice on the patent markets

The Supreme Court’s judgment in Alice has had a huge impact on case law governing patent-eligible subject matter in the United States, but it has not had the effect on the secondary deals market that might have been expected.

Southeast Asia is home to a thriving high-tech sector, but the patent systems in many of the region’s economies remain in their infancy.

Plausibility after pregabalin – how much information must a patent disclose?

Having been the subject of a key decision from the UK Supreme Court, plausibility has been an increasingly important topic for life sciences rights holders to consider in both patent prosecution and litigation.

Mind the gap – the high cost of low credibility

IP stakeholders need to do a better job of educating business leaders, investors and the wider public on the importance of IP rights.

Recent guidance from the EPO and USPTO gives IP owners more clarity over what can be considered patentable in AI and machine learning.

A selection of recently reported facts and figures.