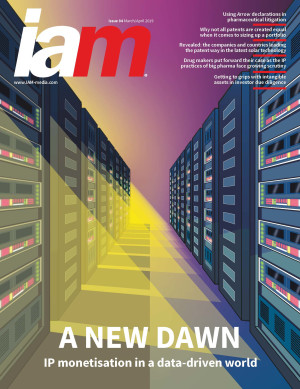 For years much of the focus on creating value from intellectual property has been on patents, but the emergence of a group of new technologies may help to rewrite the rules on monetisation. Patents will still play a crucial role but look set to become part of a broader mix of intangible assets in the discussion around value creation.

Apple v Qualcomm is the global patent fight for our times

Why Qualcomm’s winning of an injunction in China against Apple is another sign that the patent market is drifting inexorably eastwards. With the country’s answer to the Court of Appeals for the Federal Circuit opening at the start of this year, rights holders have even more reason to turn to Chinese courts.

The big stories from the IAM platform in December and January.

When it comes to litigation strategy, drug businesses have another option to consider in some cases thanks to recent rulings from the courts of England and Wales.

Brand name pharmaceutical companies are facing a policy-making onslaught; with their IP strategies firmly in the spotlight, many are being forced to speak up for the rights that underpin their products.

What investors need to know about IP due diligence

Understanding a company’s intellectual property is a crucial part of any investor’s acquisition due diligence as it provides an insight into a target’s overall management and points to a business’s possible future direction.

Not all patents are created equal: The Wizard of Oz and patent portfolios

Large portfolios can often give companies a lot of sway in licensing discussions, but those numbers can be manipulated and skew the true strength of a business’s patent position.

Shanghai was the only place to be in early December as IPBC Asia once again attracted the continent’s leading patent players for three days of discussion and debate, along with plenty of networking.

Critical condition: why patents matter more than ever for medical devices

From uncertainty over patent eligibility to the forces of convergence increasingly shaping the sector, IP strategy has never been more important for medical device companies.

Intellectual property and the next generation of solar technology

Solar technology is one of the key drivers of the renewable energy market, with a band of leading innovators helping to shape the sector.

IAM’s Asia IP elite is bigger than ever as some of the continent’s largest companies continue to push the envelope on IP value creation. This year we welcome a host of newcomers to the list.

The singer-songwriter is using her industry clout to secure an unprecedented record deal that will also improve the streaming-related revenue of fellow artists.

Could the rise of data leave IP professionals stranded?

As data is increasingly treated as an asset class, IP professionals must learn to embrace it or risk being ignored by their own organisations.

New rules on preliminary injunctions from the Supreme People's Court could have a significant affect on IP litigation in China – not least the long-running battle between Apple and Qualcomm.

A selection of recently reported facts and figures.