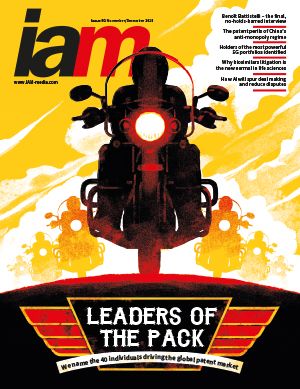 The shapers of the global IP market

The fifth IAM Market Makers reveals which executives we believe to be setting the parameters of the patent business world. Many of the 40 names have featured on the list for a number of years; some are new; and – for the first time – a couple of big names do not appear at all

The UPC and EU trademarks will not inflame any Brexit passions among those outside the IP bubble, but geographical indications are a different matter altogether

Some of the major stories carried on the www.IAM-media.com platform in August and September

Five companies currently dominate the 5G patent landscape. We show what got Ericsson, Huawei, Nokia, Qualcomm and Samsung to the top of the leader board
Timothy Au

The role of AI in evidence-based strategic IP decisions

As patents increasingly take shape as a functional asset class, the use of artificial intelligence looks set to lead to more licensing and less litigation
Nigel Swycher and Steve Harris

From Oil States to SAS Institute and WesternGeco, the Supreme Court’s most recent term had plenty for patent practitioners to consider.
Paul Michel and Matthew J Dowd

After eight tumultuous years, Benoît Battistelli is no longer president of the EPO. In June, he sat down with IAM to look back on his controversial tenure. One thing was clear: he would do it the same way all over again
Joff Wild

Proprietary versus open standards in ICT

There are benefits and risks attached to the implementation of open and proprietary standards in ICT, both from a business and consumer perspective. It is therefore vital to get the balance right.
Paul Zubrinich , Kristina Medow , Anastasia Kolganova , Moritz Müller and João Hierro

China’s Anti-monopoly Law as a weapon against foreigners

The rise of biosimilars and the future of healthcare intellectual property

The IP Hall of Fame class of 2018 was inducted at a special lunch just before this year’s IPBC Global in San Francisco. In interviews conducted before and during the event, the three inductees provide detailed insights into what makes an IP world beater
Adam Houldsworth

How to undertake a successful IP operations transformation

Creating an effective strategic operational function within intellectual property is no small task. Doing so will challenge leadership skills and management capacity, but it is unavoidable to ensure that a business maintains its competitive advantage

In a bid to defeat the Nazis, film actress Hedy Lamarr developed a secret communications system that would later serve as the basis for WiFi – but why did it take 20 years to be recognised?
Bruce Berman

Collaboration between firms has never been more important to the innovation process. A common approach to IP issues must be agreed from the start and enshrined in a partnership’s founding documents
Graham Bell

Philips DVD case is a missed opportunity for India

The Delhi High Court has handed down India’s first post-trial SEP decision in an eagerly awaited case involving DVD player patents. However, a closer look at the details suggests the judgment has limited value as a precedent for similar disputes
Essenese Obhan

America Invents Act trials and the challenges at the PTAB – where do we go from here?

A panel of PTAB practitioners gathered in Washington DC in May to discuss the effect that post-issuance reviews continue to have on the US patent system. As this special report reveals, there was plenty to discuss
Timothy McAnulty , Joshua L Goldberg and Trenton A Ward

Obtaining and enforcing patents in Asia has never been more important for global technology companies. The top IP advisers from around the region give the inside edge on key jurisdictions